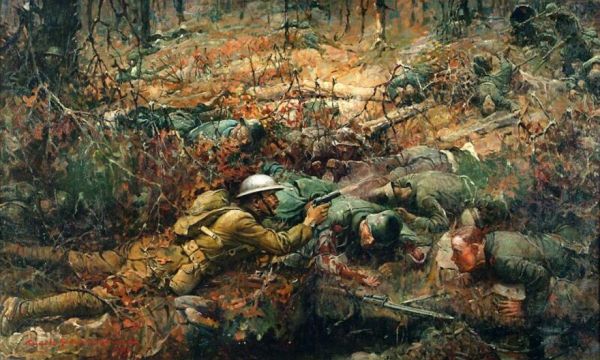 We all know the story of Sgt. Alvin York, mostly because of the 1941 Gary Cooper movie. York killed 25 enemy soldiers and captured 132 more in one day in France. For his efforts, he received the Medal of Honor and legendary hero status. He was not the only one who displayed heroism on that day in 1918. You can read an account of the battle in which quite a few of York’s comrades performed in exemplary fashion, in supporting roles, you might say. But it was York who became the face of the US efforts in World War I.

It would be nice to say that York et al went on to live happily ever after, and in some instances that was approximately so. But even as the S.S. Ohioan carrying York’s company arrived in New York, a whispering campaign had begin casting some doubt on York’s reputation as a “one-man army.”

The New York Times reported as much in May 1919, saying that while the men on the ship were “unanimous” in their praise for York, “several officers expressed regret that other members of York’s patrol squad which surprised the Germans at Hill 223 in the Argonne Forest, had not won recognition.”

In fact, Beardsley, Konotski, Wills, Sacina, and Donohue were cited for their “splendid conduct” by the 164th Brigade. Missing from the equation, though, was Bernard Early, who had led the patrol into that ravine and taken the initial surrender of the Germans, and Otis Merrithew, a.k.a. William Cutting.

Both were recovering from their wounds while the army performed its investigation of the Oct. 8 action; both would, to different degrees, become thorns in the side of York and cast doubt on the army’s official line about York’s heroism.

Jealousy? Maybe somewhat. The other men didn’t so much begrudge York’s acclaim as they resented the relative lack of acknowledgment of their own actions. Read what happened to the men who fought with York at Military History Now.  -via Strange Company