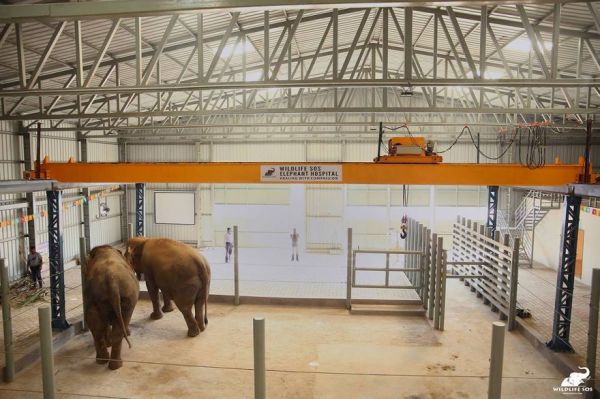 The organization Wildlife S.O.S. runs an elephant shelter in Mathura, Uttar Pradesh, India. They recently opened the first hospital for elephants in India as well, adjacent to the shelter. The Wildlife SOS Elephant Hospital has state-of-the-art equipment like wireless digital X-rays, thermal imaging, digital scales for massive animals, ultrasonography, and facilities for quarantine and tranquilization of the huge mammals.

The hospital, inaugurated on Friday in the Hindu holy town of Mathura, is spread over 12,000 square feet and is designed to treat injured, sick or geriatric elephants.

“I think by building a hospital we are underlining the fact that elephants need welfare measures as much as any other animal,” Geeta Seshamani, co-founder of Wildlife SOS, the non-profit behind the hospital, told Reuters TV.

“That captive elephants are not meant to be used and abused but instead have to be given the respect which an animal needs if you are going to be using the animal.”

Read more about the hospital at Reuters. -via Mashable

Keep it up All-You-Can-Eat-Press… We Are Hungry for More!

Lime-Green Condo is a Time Capsule from 1974