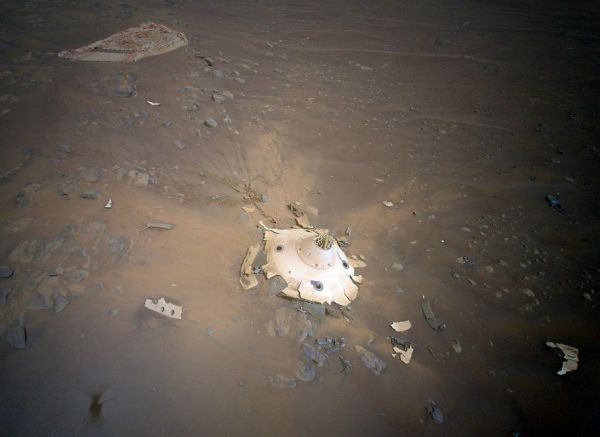 Two years ago, NASA’s latest Mars rover Perseverance landed on Mars in a stunning maneuver we got to witness in real time (though delayed, because Mars). Although the spacecraft crashed, that was part of the plan. The Perseverance mission took along Mars’ first helicopter, named Ingenuity. On its 26th Martian reconnaissance flight, Ingenuity revisited Perseverance’s landing site and recorded the debris left behind from an overhead view.

With no scavengers, fungi, bacteria, or rain on the red planet, the debris is in almost pristine condition after two years. The wind on Mars has partially buried the spacecraft’s parachute under dust. The backshell is surprisingly intact, considering the speed and heat involved in its landing. Photographing and studying the debris field will help NASA to plan future missions, including one designed to return to earth carrying Martian samples. Read about Ingenuity’s photographic mission and what it means at NASA. -via Kottke