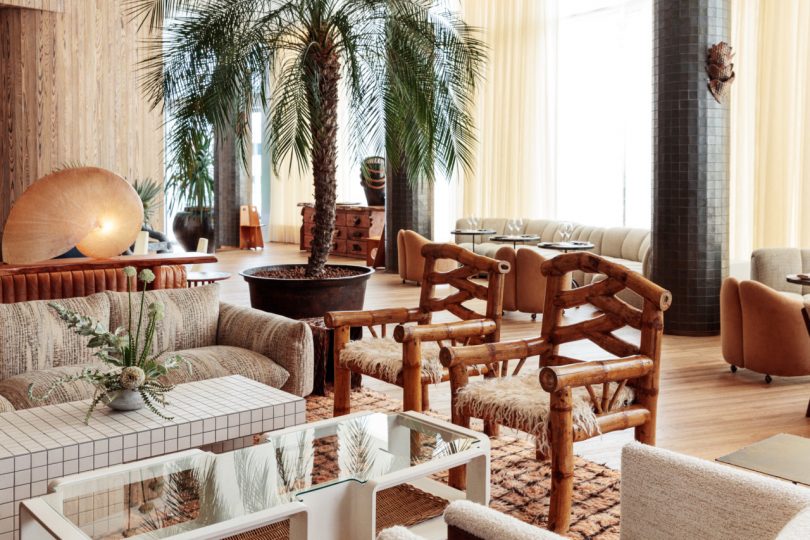 There is a certain type of look associated with modern California. It has to do with the pink neon signs inside restaurants or hanging on top of grass-covered walls, windows with large expansive views from a cliff or of the ocean, courtyards framed by lush palms, interiors colored by the palette of mountains or a burnished sunset. There’s something familiar and friendly about those interiors—one look and you’d guess you’re on the West Coast.

But once in a while, there’s something that totally trounces the typical impression of Southern California and seems completely timeless, placeless, present. Forget about the neon accents, the surfer vibes, the ocean waves. Santa Monica Proper Hotel, the luxury project from Kor Group’s Proper Brand, is this summer’s cream-hued fantasy dream of what a hotel can be when it pursues a refined, subdued elegance. 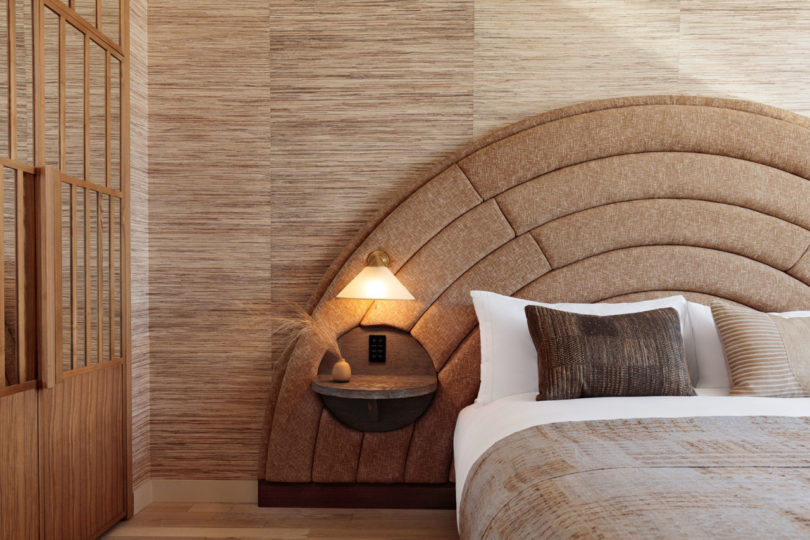 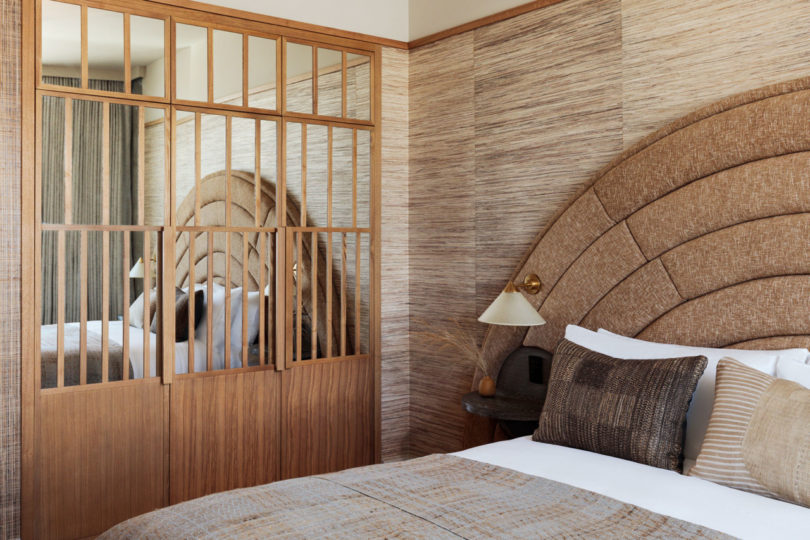 The Santa Monica Proper is built in and around a 1920s-era Spanish Colonial Revival-style building which used to be known as the Santa Monica Professional Building, designed by Arthur E. Harvey. Through adaptive reuse, 271 guest rooms and suites were created, along with a 3,000-square-foot Ayurvedic spa by Martha and Roger Soffer, a 2,500-square-foot gym, a 7th floor indoor-outdoor bistro by chef Kaleo Adams, and a ground floor restaurant headed by LA native Jessica Koslow of Sqirl and Gabriela Cámara of the legendary Contramar in Mexico City. 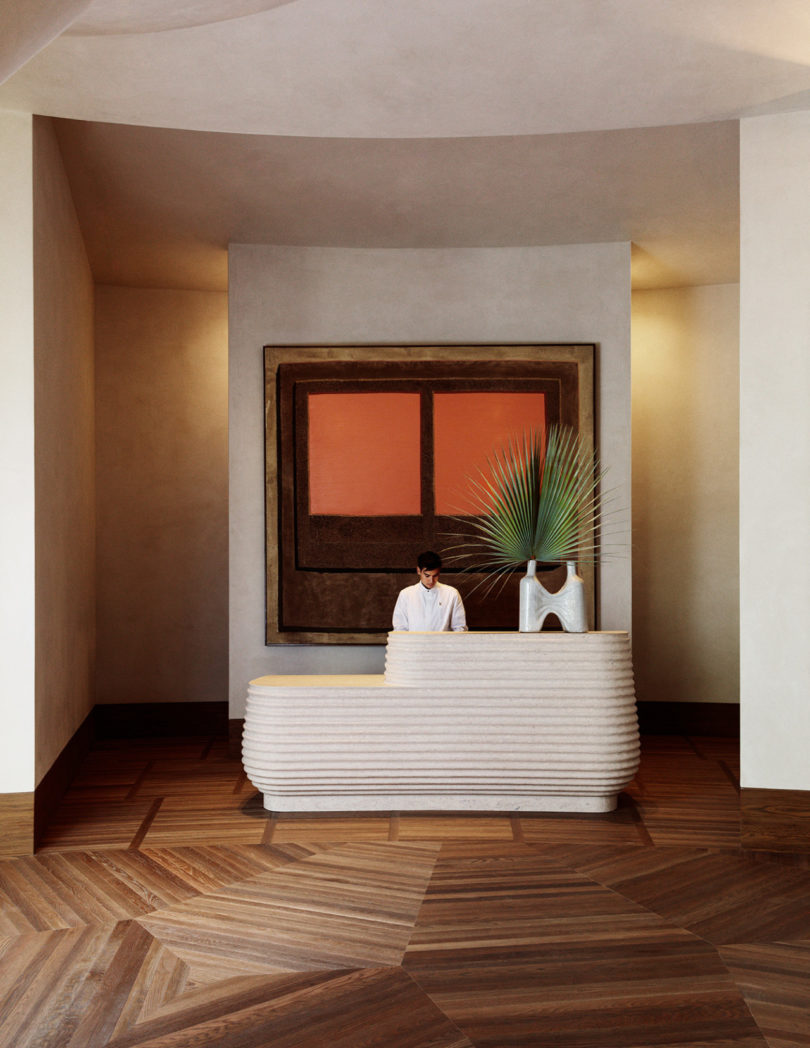 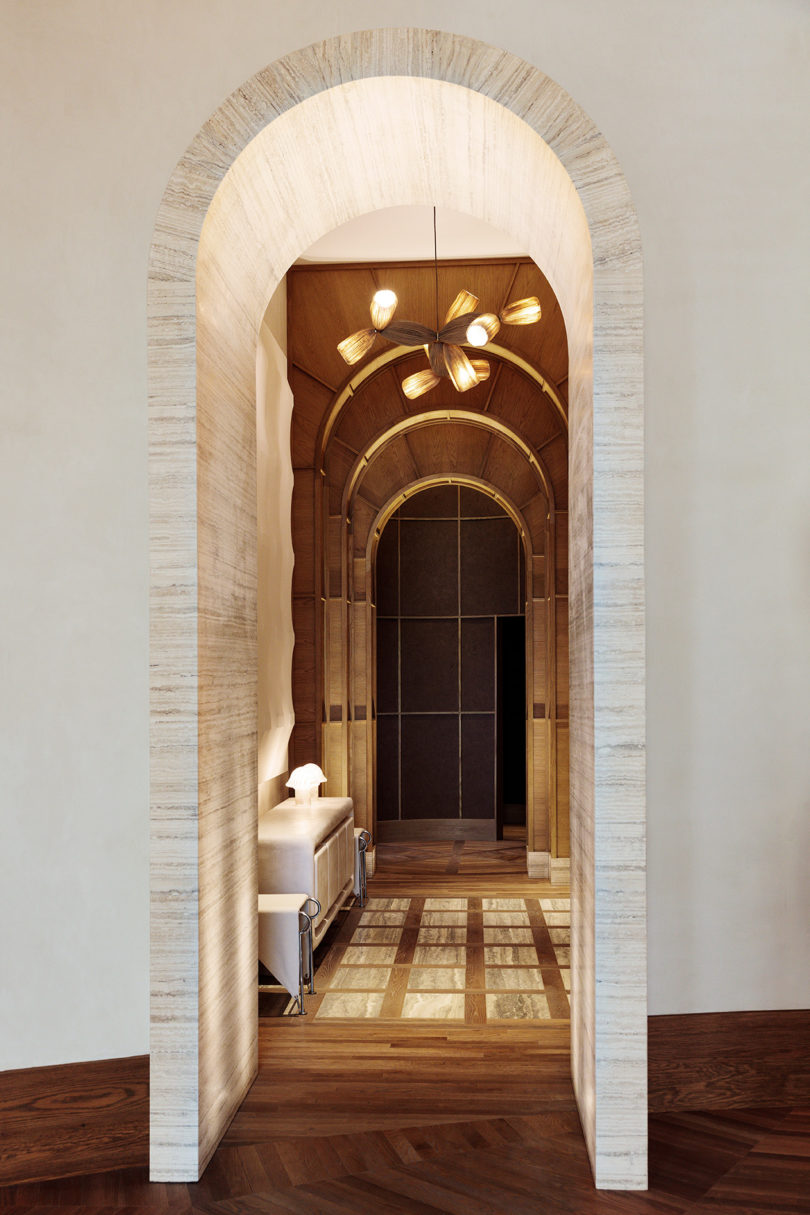 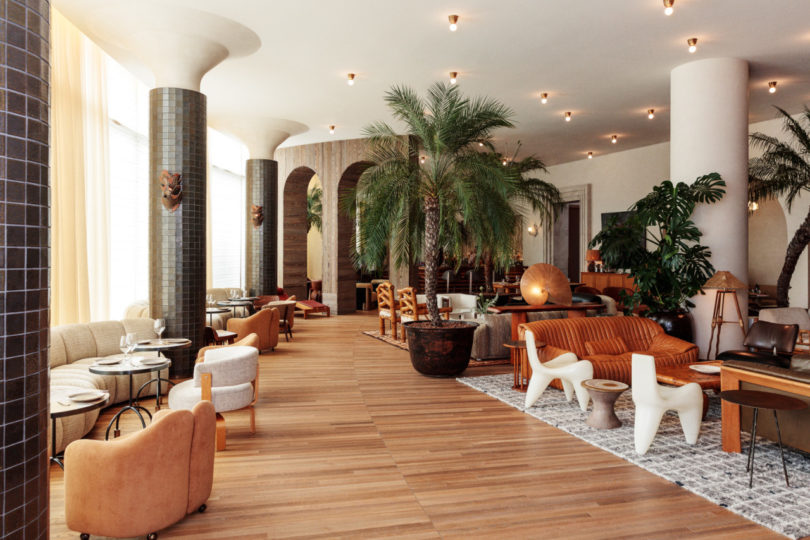 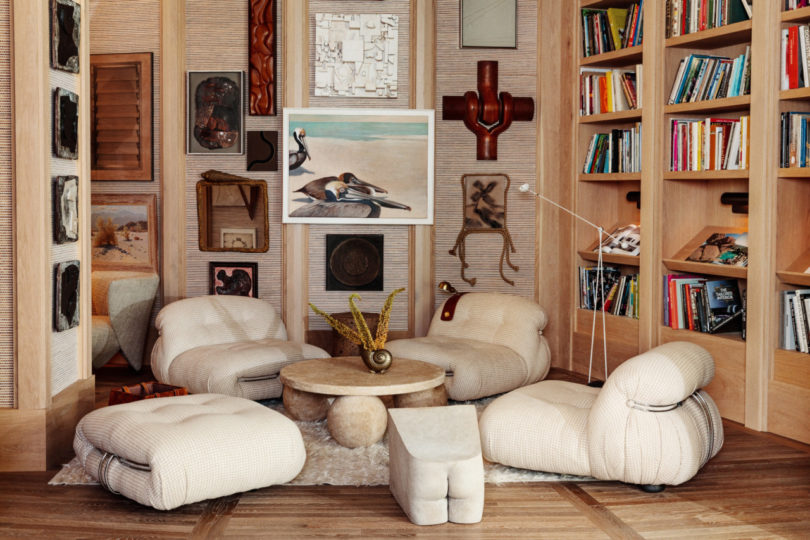 In Palma, the art-filled lobby which earned its own name, white and orange “chubby” furniture are placed strategically beside sleek mid-century pieces in marble and wood. A cosy library nook is filled with soft linen chairs for lounging, while I imagine more social gatherings will take place on the deep rust-colored couches that pop up along the floor. Eclectic coffee tables—some are white ceramic tiled, some are glass-topped—make a playful statement and add visual interest, plus they are surrounded by teak chairs, shaggy cushions, and a python colored couch: all the things you might never expect to go together.

It surely takes some talent to arrange this in a tasteful and coherent way, and many of the interiors can be credited back to designer and icon Kelly Wearstler. 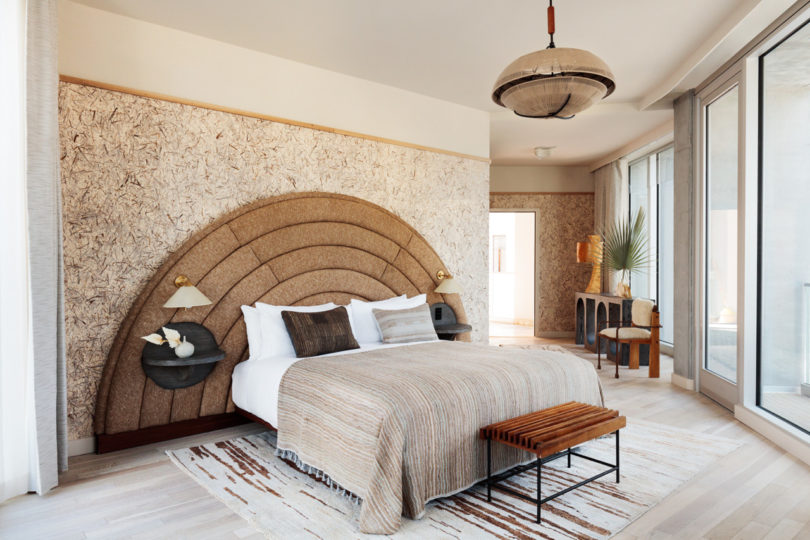 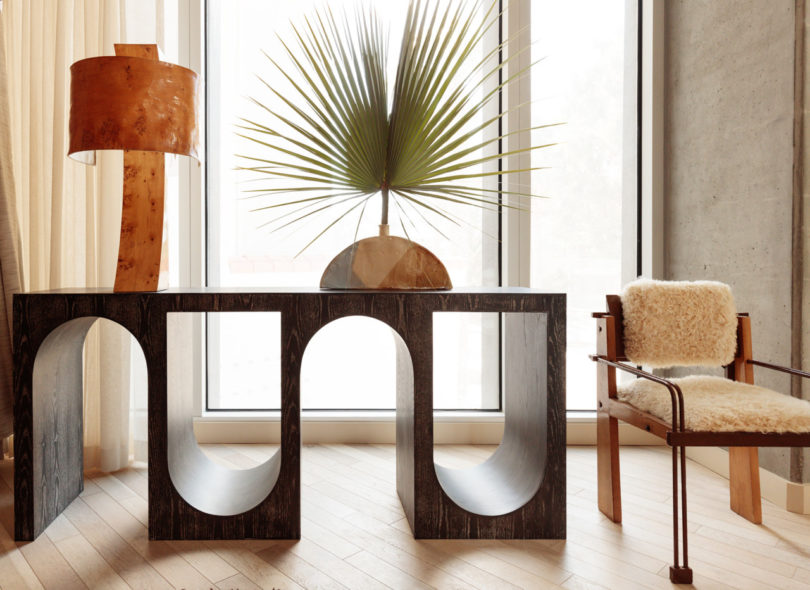 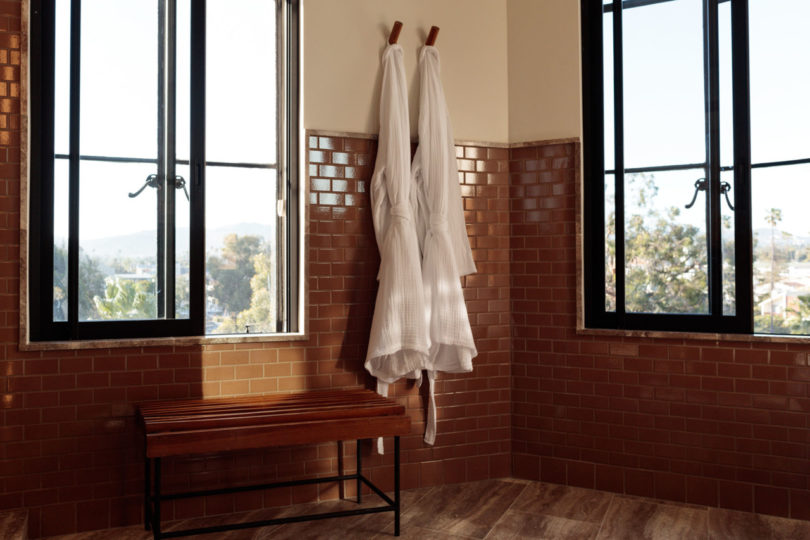 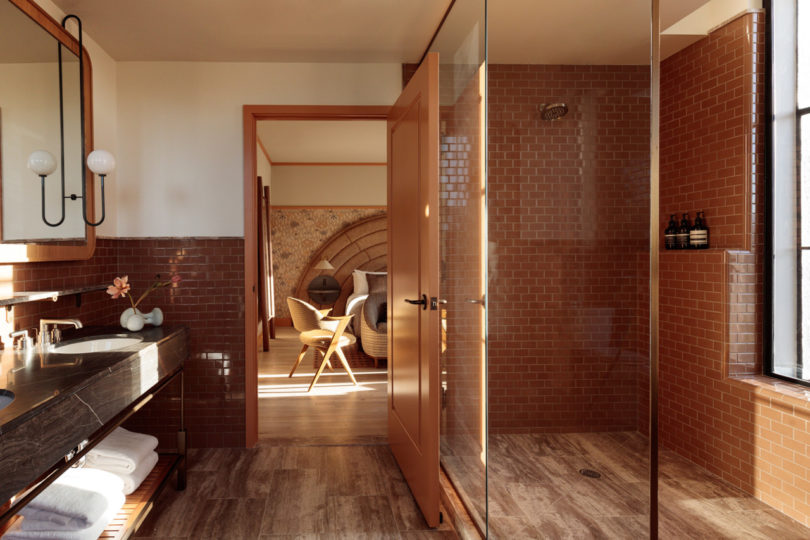 The guests rooms extract their shades from a wheat- and honey-colored palette to exude a warm and homey country vibe. In the bathroom, darker marble and copper tones create a more decadent, luxurious effect. 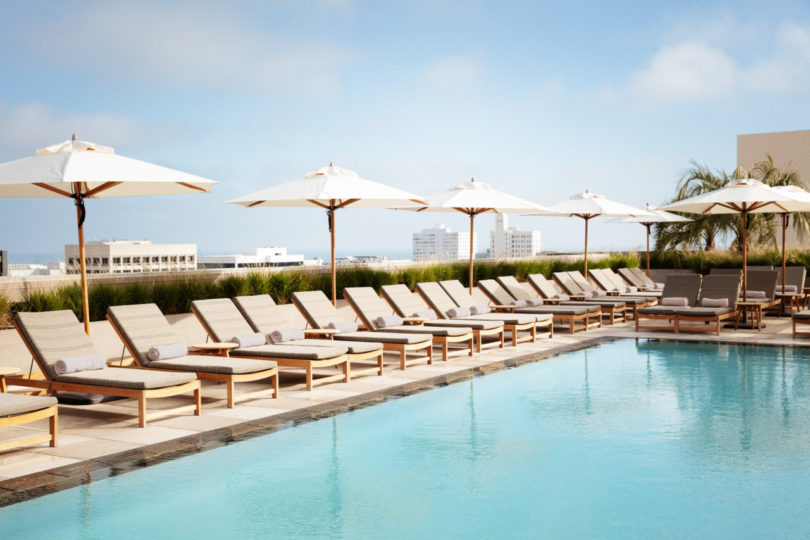 And if the water attracts you, the hotel also has a rooftop pool to take in the sun—after all, you are in California.