Get a glimpse Inside the Studios, a weekly IGTV series where our regional Fair Directors get taken on a personal Live tour around the workspaces and collections of The Other Art Fair exhibitors. Head to our IGTV to watch the interviews in full.

Ahead of The Other Art Fair Sydney this September, we speak to exhibitor Clinton Gorst about his otherworldly collage artworks. Inspired by old music magazines and records, Clinton began collaging at a young age to create birthday gifts for his close friends and family, unknowing of the career it would lead him to in later years. Clinton’s recent works are driven by crucial narratives such as green energy and the climate crisis, which we are delighted to feature at our upcoming Fair… 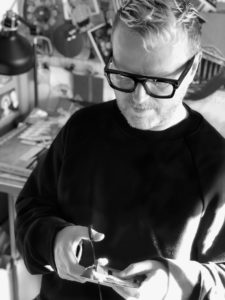 Tell us a little bit about yourself and your creative practice. What first led you to collaging?

People often ask me why did you choose collage, but I think collage chose me! From an early age I would cut out images from music magazines of my favourite artists and make covers for old 7” records that I had. It kind of grew from there, and I started making collage cards for birthday presents, and then eventually created standalone pictures that I started framing as gifts and for my walls. I was lucky to be surrounded by music and books growing up, and I had a curious mind to take what was around me and make something new from the materials I had.

Where did you source your materials from when you began collaging, and how has this evolved for the artwork you create today?

My first resource material was from something music orientated, like Smash Hits or No.1 magazines, but as I grew older I discovered pop culture bible The Face, which was a huge inspiration. This was the mid-90s and I moved to London from New Zealand when I was 21 which was a major culture-shock! My early collages were usually people orientated, derived from the fashion spreads or features, but as I visited more places I started collecting photobooks of cities and places which would become a life-long obsession. I started buying second hand books especially to cut out and remix. And today I’ve accumulated a huge book collection which take up half my studio. I also have trays with cut out pages sorted into categories like architecture, nature, or science. I try to be organised so I can find the right image quickly when I make my works. But if there is something specific I want in a work, that I know I don’t have, I will search second hand bookstores for the right subjects. I prefer books from the 50s-70s as the pictures and paper quality are the vintage vibe that I love. I hardly ever use new books as the paper quality is different, and also for copyright reasons. 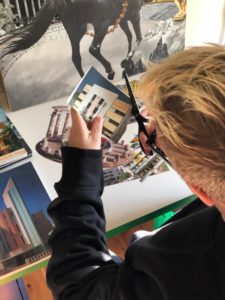 How did your education as a graphic designer aid your creative practice?

Going to design college gave me the tools to look beyond the visuals, and really opened my mind up to what you could create when telling a visual story. This is really important to me, in that my collages tell a story of their own, either by subject matter or what might be seen in the minor details. I’ve been fortunate that I can utilize my collage style in my design career, although this is more digital work. I differentiate my art from this however, as they are all analogue works, all hand-cut and assembled. My collages style is deliberately clean and has my own set of rules. For example, I camouflage blunt edges, or paper folds, with another cut-out as a layer on top, so the final result is as seamless as it can be. Larger works have dozens of pieces that are meticulously arranged and layered to form the final picture. Another point is in my design work, I usually work from client briefs, and as I do accept commissions with my collages, this can often push me into new areas, which is really great.

What are the major narratives that run through your artwork? Where did your fascination for architecture, new and old, originate?

I have many favourite subjects, often the starting point for a new work. For example, space-themed works, especially more on the scientific angle, or using ancient ruins, or wild lands to evoke a magical new world. But I’ve always loved architecture, and in the last few years this has grown to be a major element in my work. I was raised in Napier which is a celebrated Art-Deco town, so I guess that was the start of my architecture awareness. My favourite movements though, are brutalism and modernist – styles which originated from the 50s onwards, and which I’ve been collecting in resource material. I love placing odd buildings in a bizarre setting, like the surface of Mars, or floating on a cloud in space.

With collage, you have the power to create new worlds and surreal urban futures. What future will you be creating next, or have been creating recently?

One of my newest works is a large scale piece called Vegan Oasis, a futuristic geo-dome containing green energy while the outside world is uncertain with billowing smoke skies. I’ve also created a Climate Crisis series which I’ll be showing at The Other Art Fair in September. These are reverse-scale pieces that focus on wild-weather patterns, melting glaciers to drought. I wanted to show how precious the elements we take for granted are, and how we need to take care of the world around us.

Follow The Other Art Fair’s regular ‘Inside the Studio’ series on Instagram with Live talks between Fair Director’s and Fair Artists, and shop all Fair artists via the Online Studios