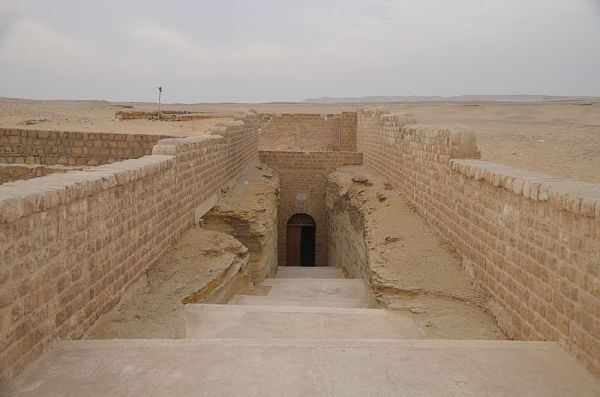 Saqqara is an ancient Egyptian burial ground just 20 miles south of Cairo that never received nearly as much attention as the grand pyramids of Luxor. Tombs at Saqqara had been raided for generations. In 1850, the director of Egypt’s Antiquities Service called it “a spectacle of utter devastation,” due to its ruinous condition. Nevertheless, archaeologists began exploring Saqqara, not realizing that it was much more extensive than it appeared. The further you dig, the more you find, and the further you go, the more pristine the burial conditions are.

One scorching day last fall, Mohammad Youssef, an archaeologist, clung to a rope inside a shaft that had been closed for more than 2,000 years. At the bottom, he shined his flashlight through a gap in the limestone wall and was greeted by a god’s gleaming eyes: a small, painted statue of the composite funerary deity Ptah-Sokar-Osiris, with a golden face and plumed crown. It was Youssef’s first glimpse of a large chamber that was guarded by a heap of figurines, carved wooden chests and piles of blackened linen. Inside, Youssef and his colleagues found signs that the people buried here had wealth and privilege: gilded masks, a finely carved falcon and a painted scarab beetle rolling the sun across the sky. Yet this was no luxurious family tomb, as might have been expected. Instead, the archaeologists were astonished to discover dozens of expensive coffins jammed together, piled to the ceiling as if in a warehouse. Beautifully painted, human-shaped boxes were stacked roughly on top of heavy limestone sarcophagi. Gilded coffins were packed into niches around the walls. The floor itself was covered in rags and bones.

This eerie chamber is one of several “megatombs,” as the archaeologists describe them, discovered last year at Saqqara, the sprawling necropolis that once served the nearby Egyptian capital of Memphis.

The Saqqara burials spanned 3,000 years, and are just beginning to reveal long-buried secrets. Read about the discoveries at Saqqara at Smithsonian.