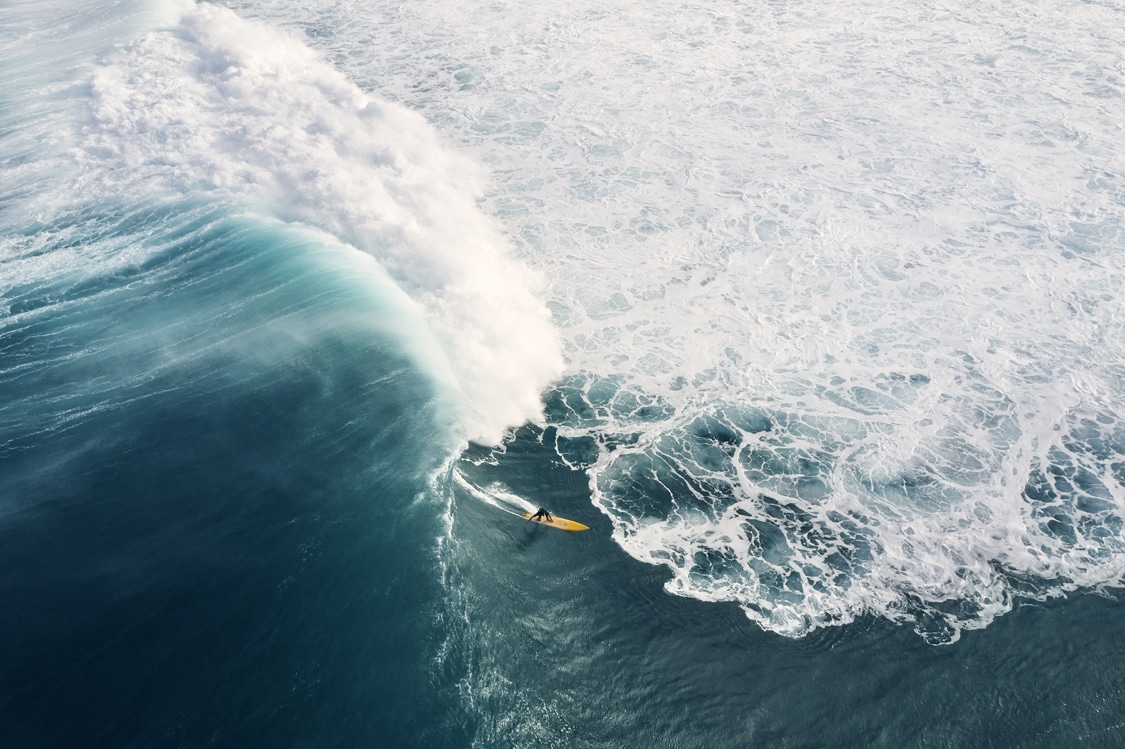 Photographer and filmmaker Drew Doggett is constantly seeking to reveal the details, textures, and forms of the natural world. In his latest series of aerial photos, titled Swell: Endless Blue, the talented creative captures the abstract patterns and compositions that emerge when surfers ride some of the world’s most colossal waves.

“When I set out to create the series Swell: Endless Blue, I wanted to highlight the patterns and the relationship between surfers and waves more than anything else,” says Doggett. “While the ocean’s unpredictability may seem like its predominant behavior, when you spend time watching waves you begin to notice patterns and shapes that may have not been initially apparent.”

Captured from an aerial perspective, Doggett’s stunning images reveal the abstract forms that the waves create as they swell and crash. Amidst vast blue ocean surfaces are surfers on surfboards that look like mere specks in comparison to the majestic setting. The surfers rhythmically weave in and out of the waves, creating a union between them and the water.

One particular pro surfer from the series is Hawaii-based Alana Blanchard. Along with the photos, Doggett and his team created a short film, titled The Escape, that expands on what it’s like to surf majestic ocean waves. Doggett explains, “For her, it is about being transported to that moment where time stands still and staying present is the only option.”

We recently caught up with Doggett to ask about the Swell: Endless Blue and The Escape film. Read on for My Modern Met’s exclusive interview. 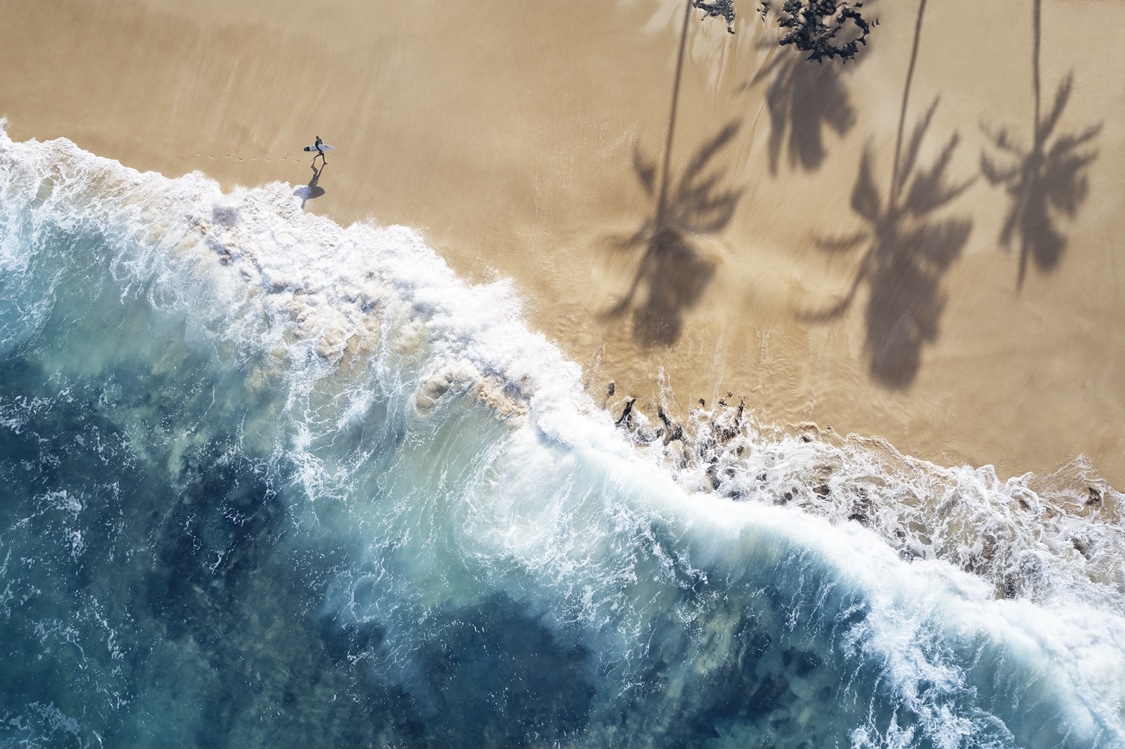 How did you get started with photography?

I got my start working in fashion alongside influential photographers like Steven Klein and Mark Seliger. This has greatly influenced the work I do today and I find myself always going back to what I learned in the studio. In terms of photography, this was, in many ways, my formal education.

What made you want to do a series on surfing?

Surfing is one of those activities that involves dedication and persistence as well as a certain understanding of mother nature that can only be learned through time. I have also been chronicling our interaction with the natural world since the beginning of my career. In 2014 I documented the incredible J-Class and 12-Meter racing yachts, so it felt like an organic decision to continue my study of our love affair with the open sea. When I first started taking aerial photographs, I had been experimenting with photographing waves as elements of design, and then when I added surfers into the mix it quickly became apparent that there was more to be told there. 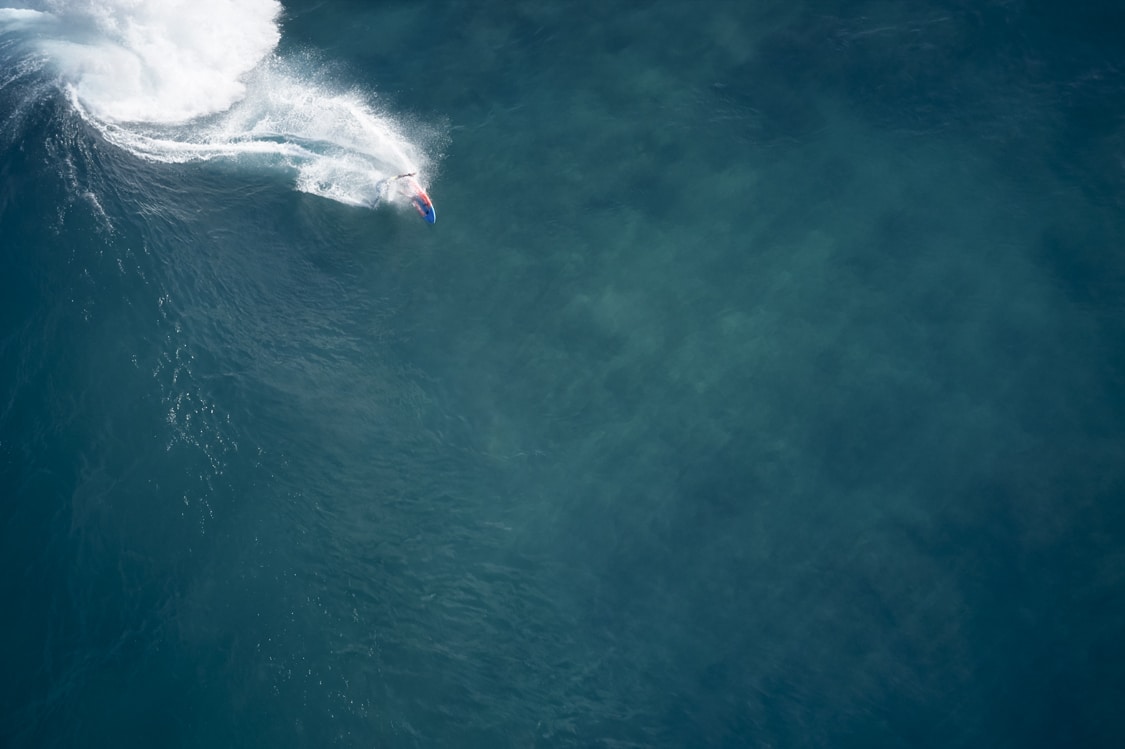 Do you feel you have a special connection with the ocean?

Ever since I was a child, the ocean has meant freedom and time spent with family and loved ones. I still have those associations and have even chosen to raise my kids around the water. I have yet to find anything as restorative as time spent near the ocean, and I think this is true for many. It makes sense that eventually, I would create work around something as liberating as surfing. 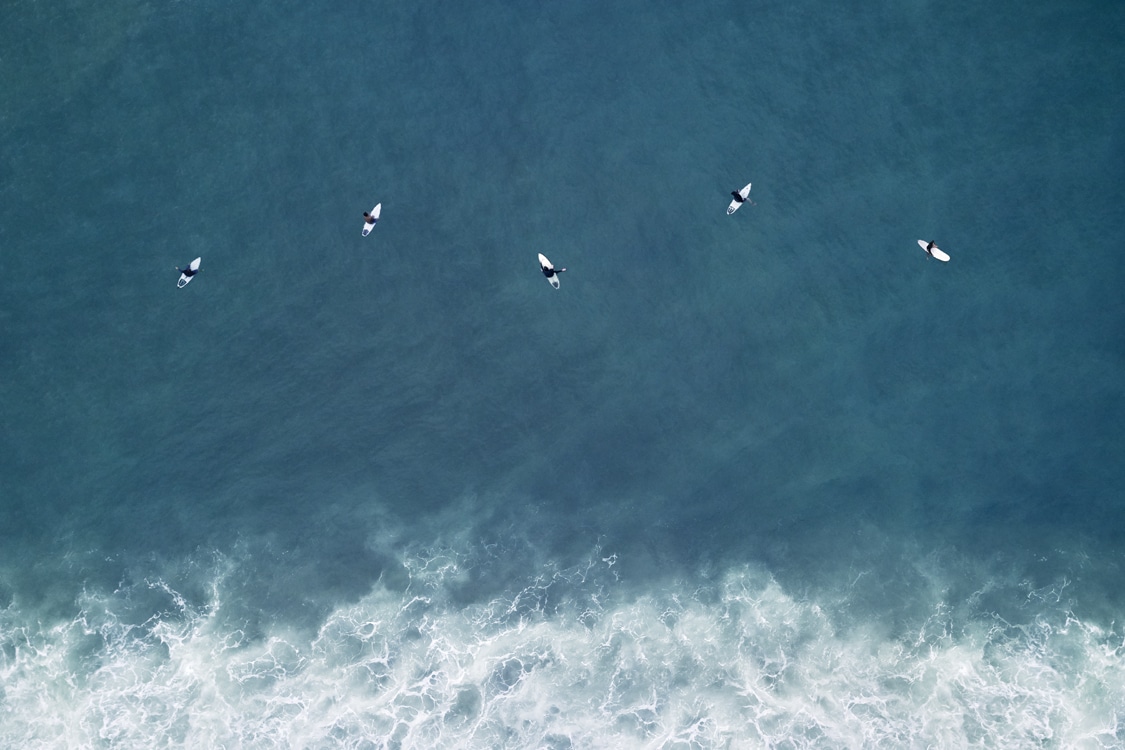 You have a great eye for texture and abstract compositions. Would you say these are important elements to your style?

In a fashion studio environment, you have to choose what you will extract from the subject using light and shadow; essentially you are drawing the eye towards something specific that you want to ensure the viewer sees. This attention to detail is something that I use throughout all of my series, whether when finding forms, bringing out textures, or creating abstract compositions from these elements. The stylistic tendencies of fashion that I use are what differentiates my work from other photographers making work about similar subject matter. 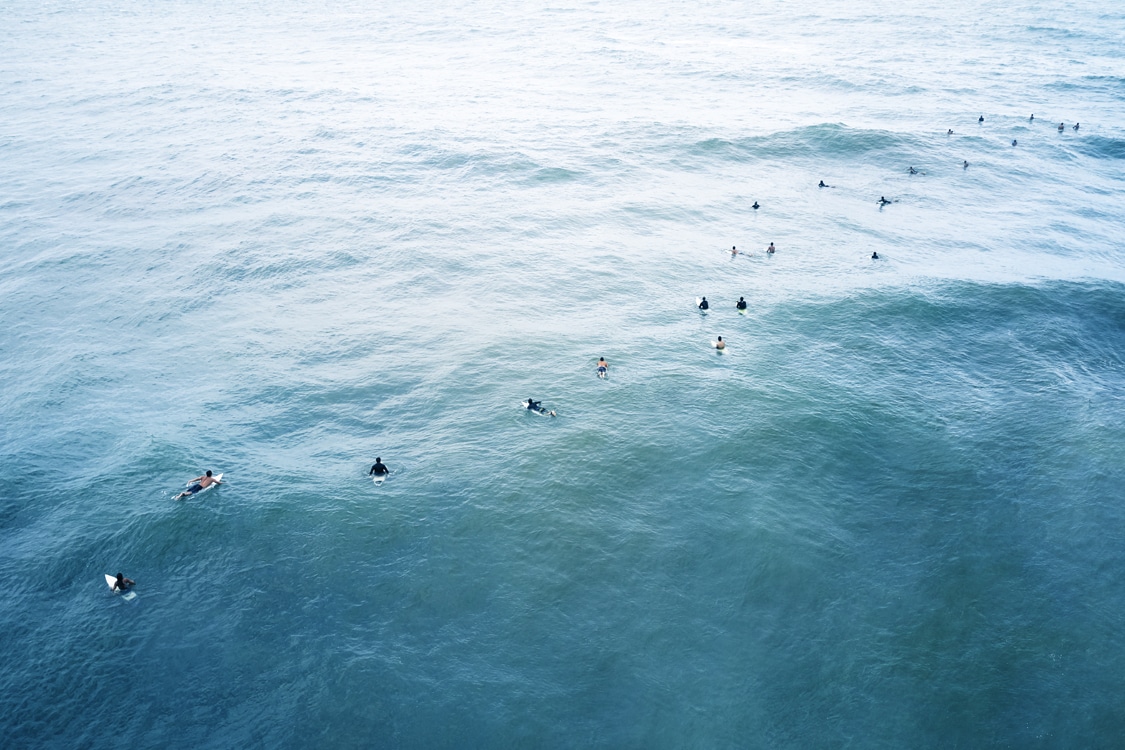 Why did you decide to shoot from an aerial perspective for your Swell: Endless Blue series?

A bird’s-eye view is one that can give you a new perspective on something you thought you understood already. I also found that from this perspective, surfing became a study in design and pattern that could only be seen as such through an aerial view. Surfing also became all the more incredible to me as a feat of bravery. The breaks outside of Oahu are huge and intimidating and the aerial perspective drives that point home.

Which aspect of this project did you find most challenging?

The most challenging aspect of making this series was the fluidity inherent in the ocean’s natural behavior. Just when I had found a pattern to focus on, the next moment it would be gone and lost forever. Also, the fast-paced nature of the sport made making this series about knowing instinctively when I should be ready to click the shutter. 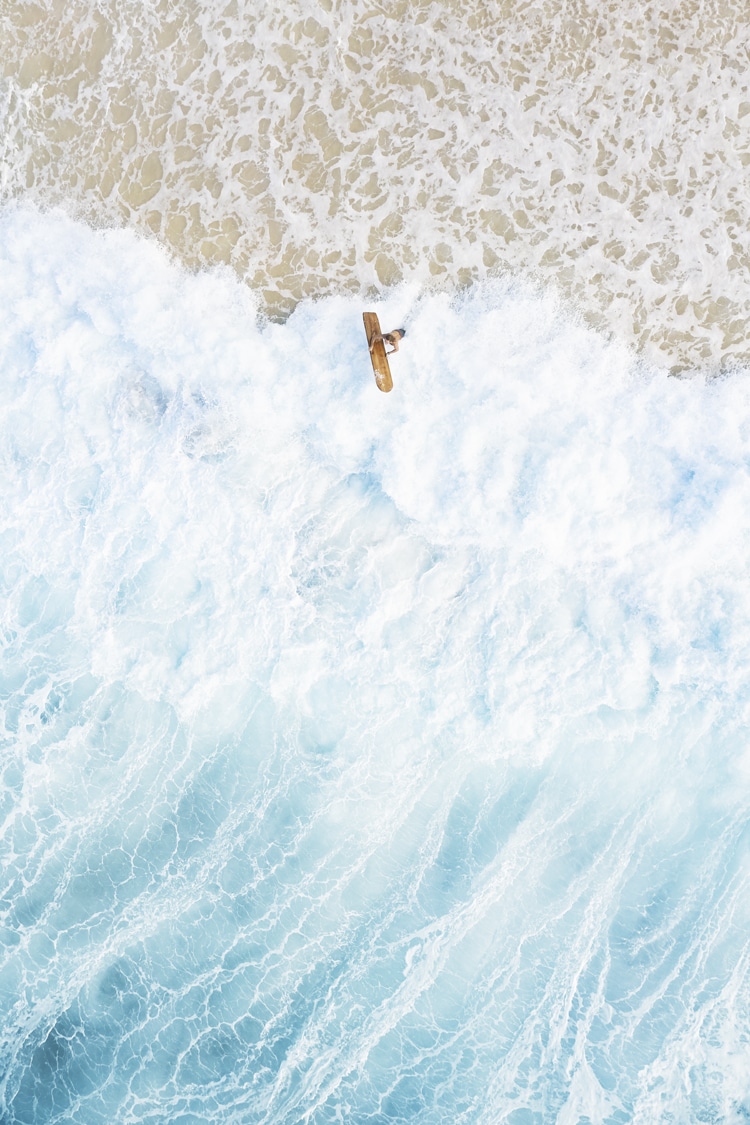 What was it like working with surfer Alana Blanchard?

We wanted the athlete we worked with on this film to be engaged with surfing in a unique way. After reading about Alana and then speaking with her a few times prior to ever discussing anything formal, it was clear that she was the perfect fit because for her, surfing is spiritual. Time spent on the water is a way she nourishes not just her body but her soul, and her enthusiasm for the sport and her home of Hawaii was contagious. We also respected her work ethic; Alana is not just an elite athlete but a model, advocate for a vegan lifestyle, creator of a YouTube show with her partner and fellow pro athlete Jack Freestone, and new mom. Working with her was a pleasure and a reminder that spending time with nature and family is so important for each and every one of us. 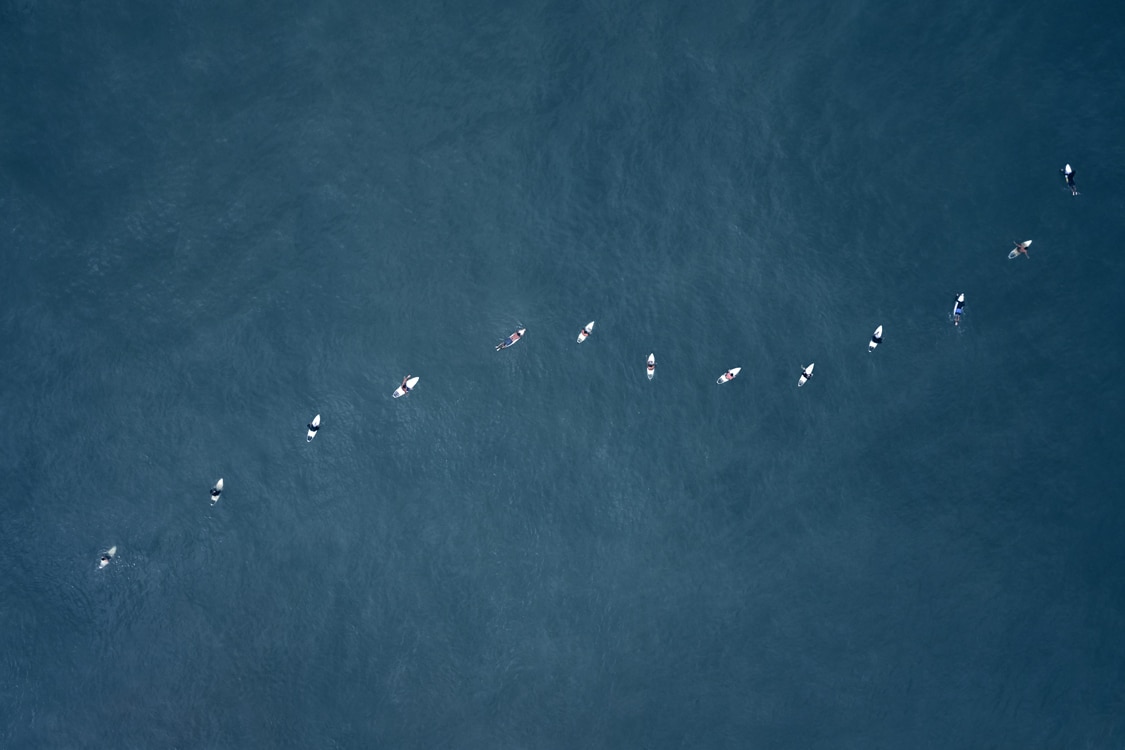 Can you tell us a bit about your day shooting “The Escape” video?

Each morning we would wake up and check the breaks to determine where to shoot. Alana grew up in Hawaii and was an incredible resource for locations, especially as the waves and weather can only be predicted up to a point. Alana would shoot with us for a few hours, paddling out over and over again to get the shot, and then run back to nurse and then to come back out and film again. One of our favorite shots from The Escape is at 2:31 where Alana is smiling from ear to ear. When we were talking to her prior to filming, she had mentioned that often times she sees footage of herself surfing and smiling, but she has no recollection of smiling. For her, it is a biological reaction the sport that has given her so much. That kind of energy and unbridled passion sums up our time filming with Alana. 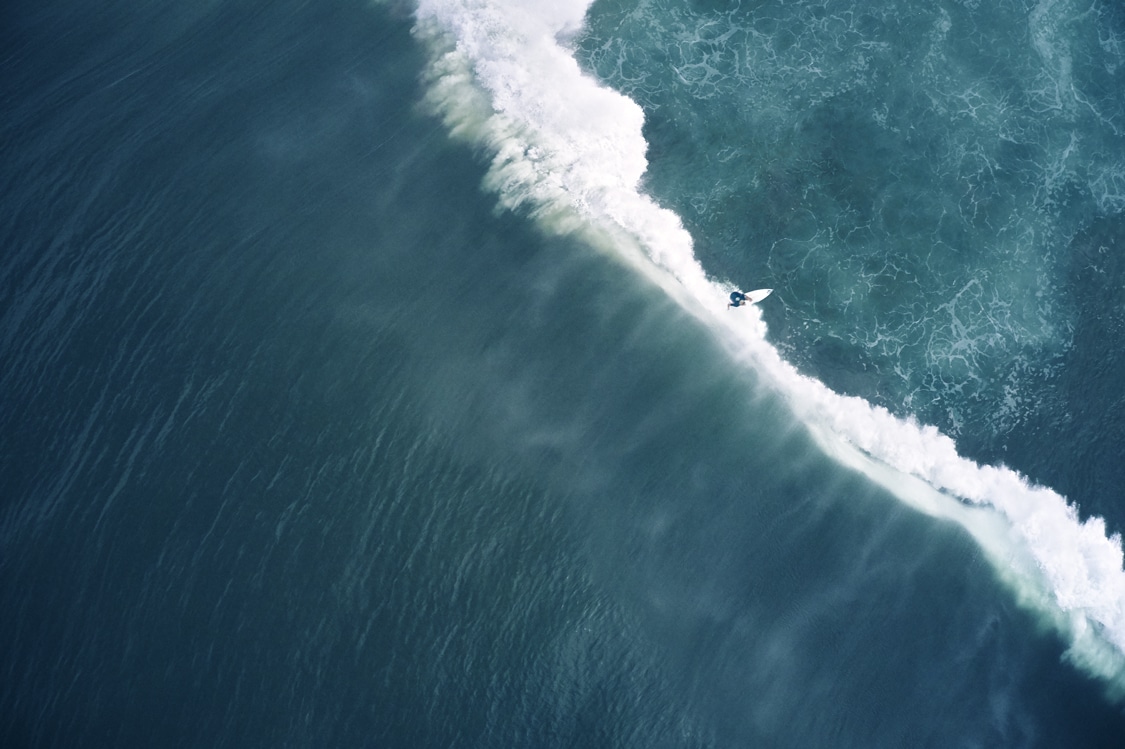 In the coming months, we will be releasing my first equestrian studio portraits. I was granted unique access to some of the world’s most elite show horses and I can’t wait to share the final images. 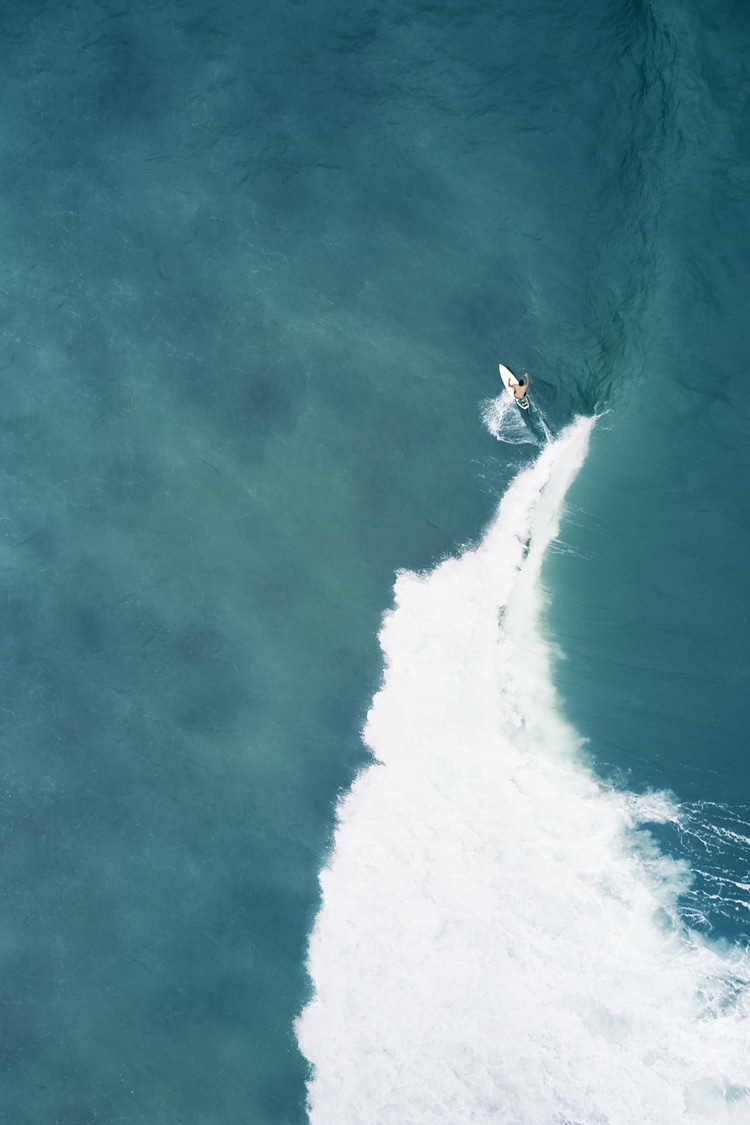 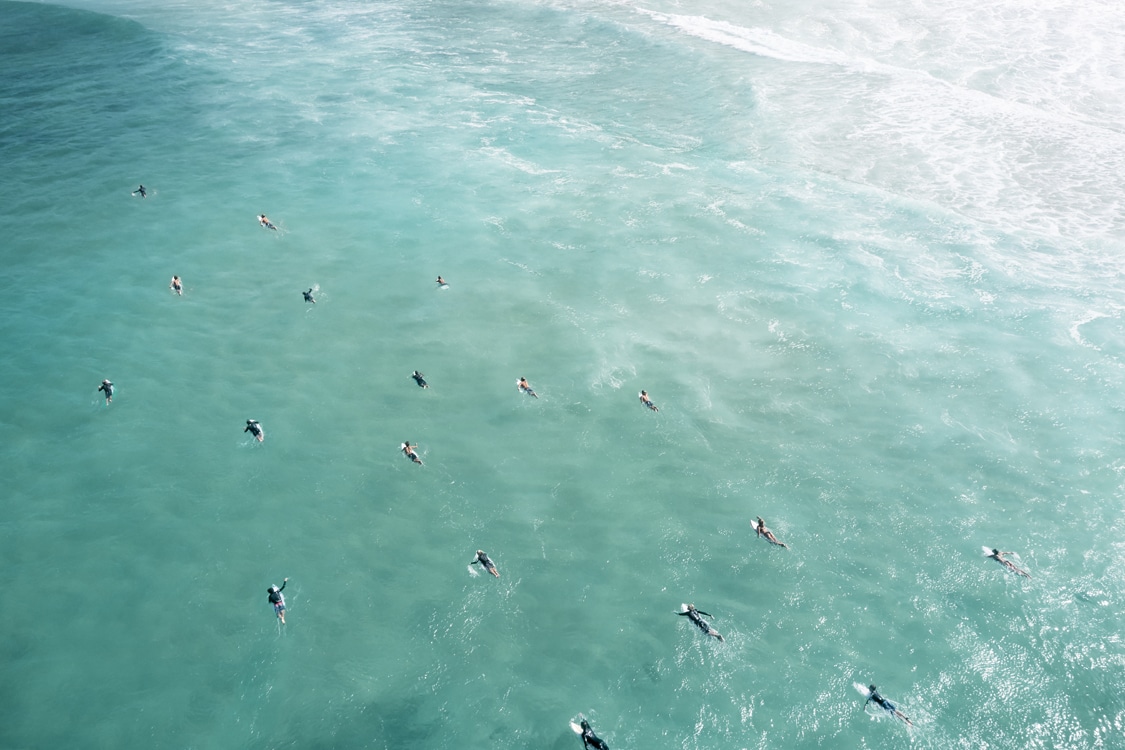 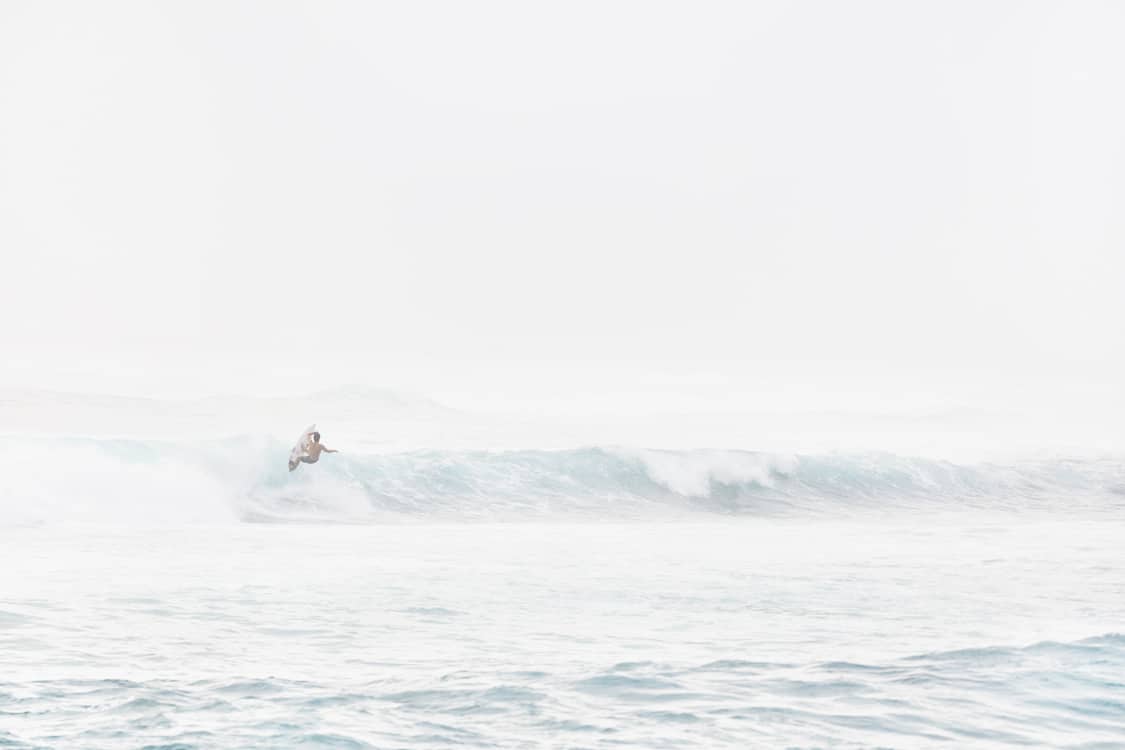 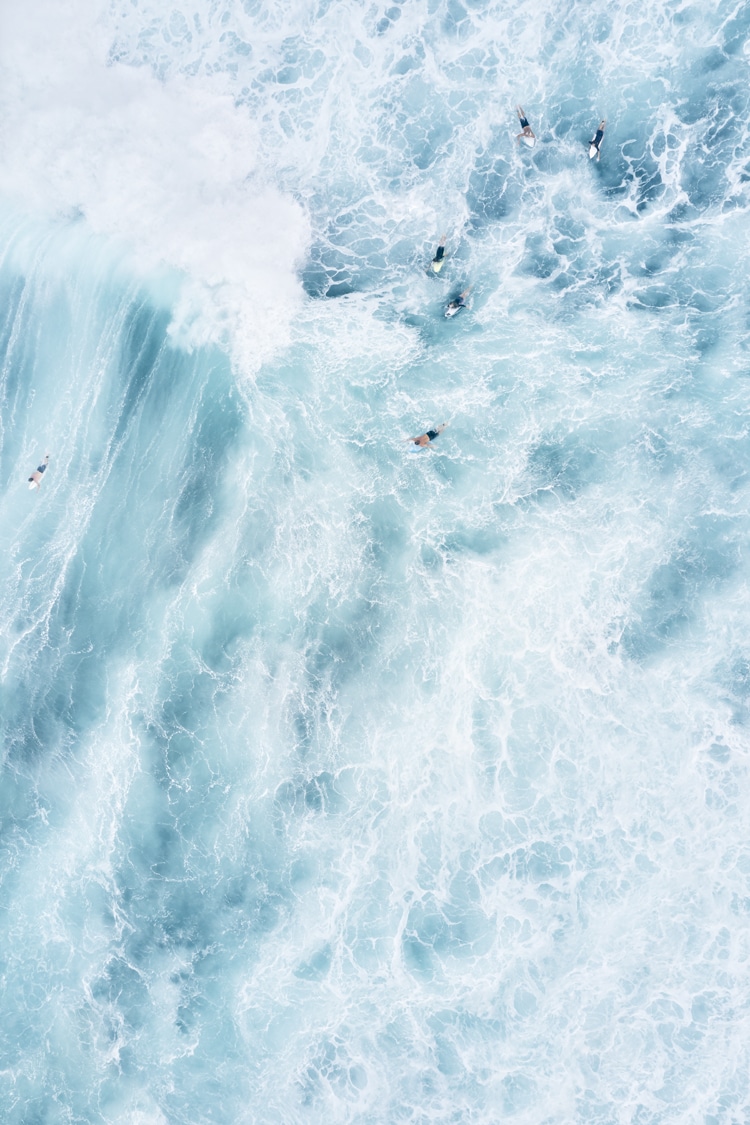 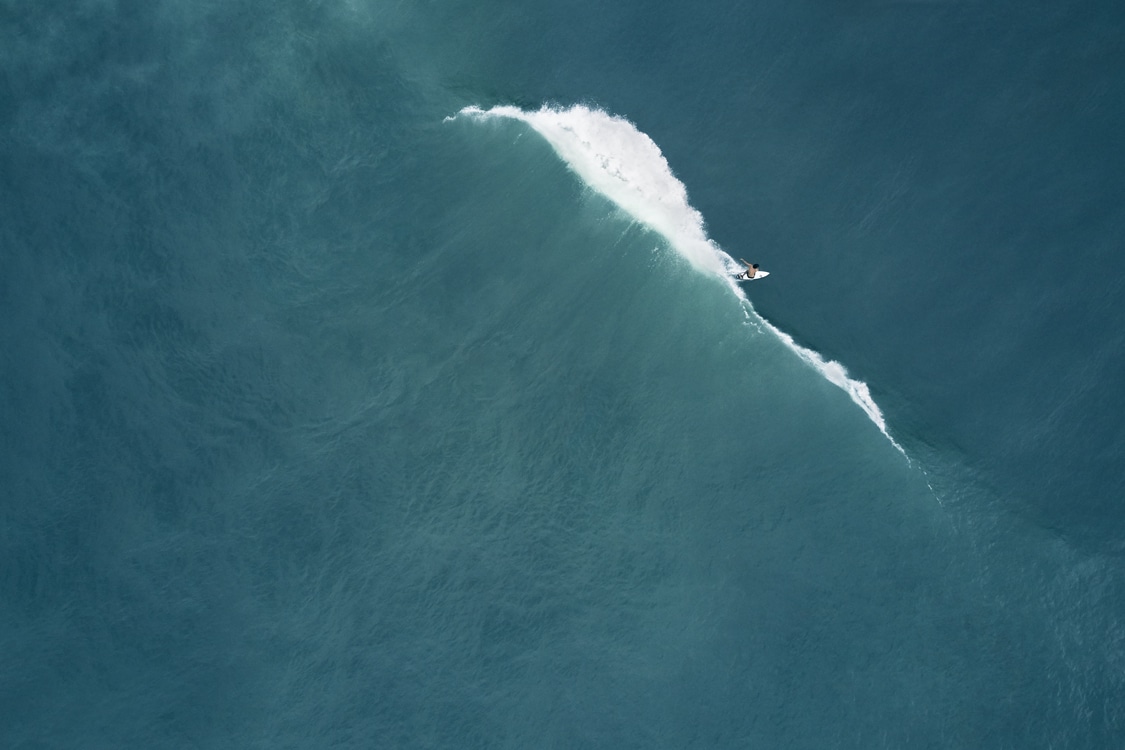 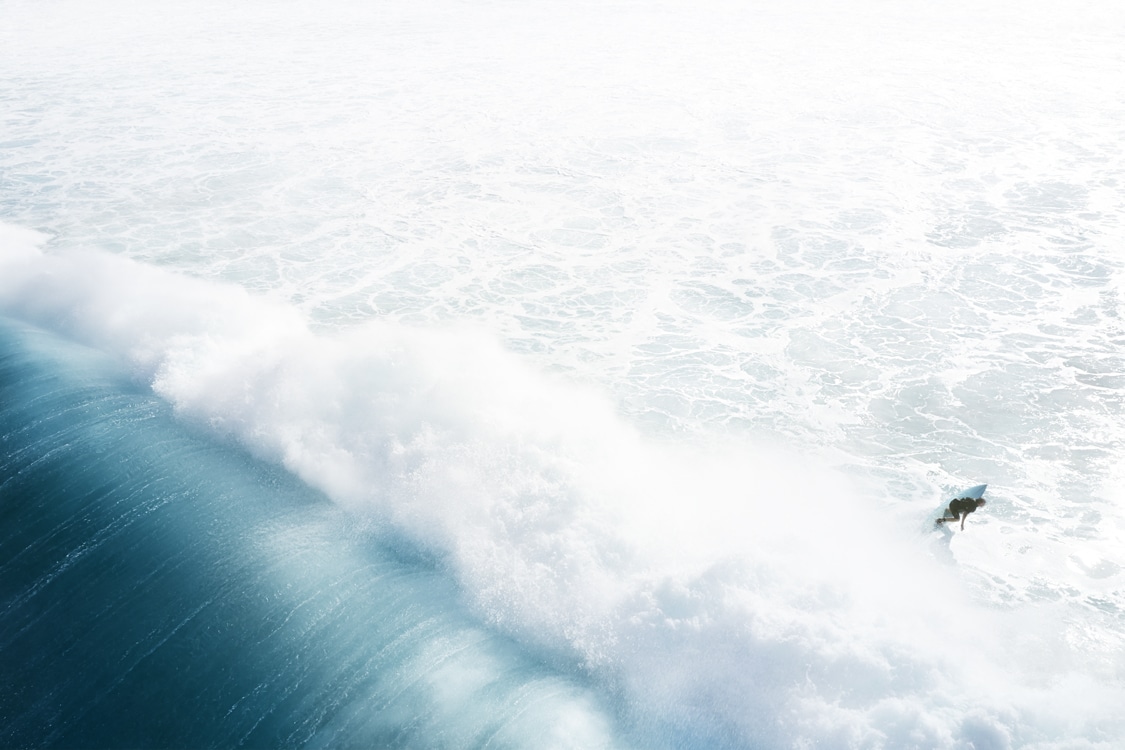 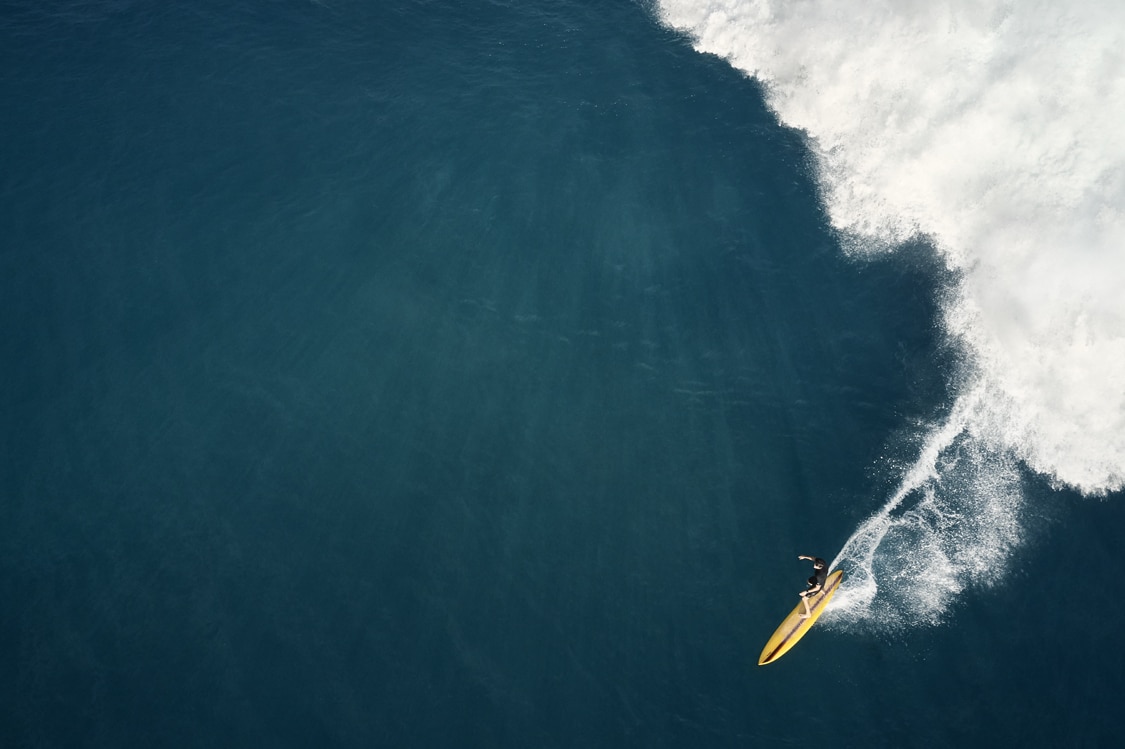 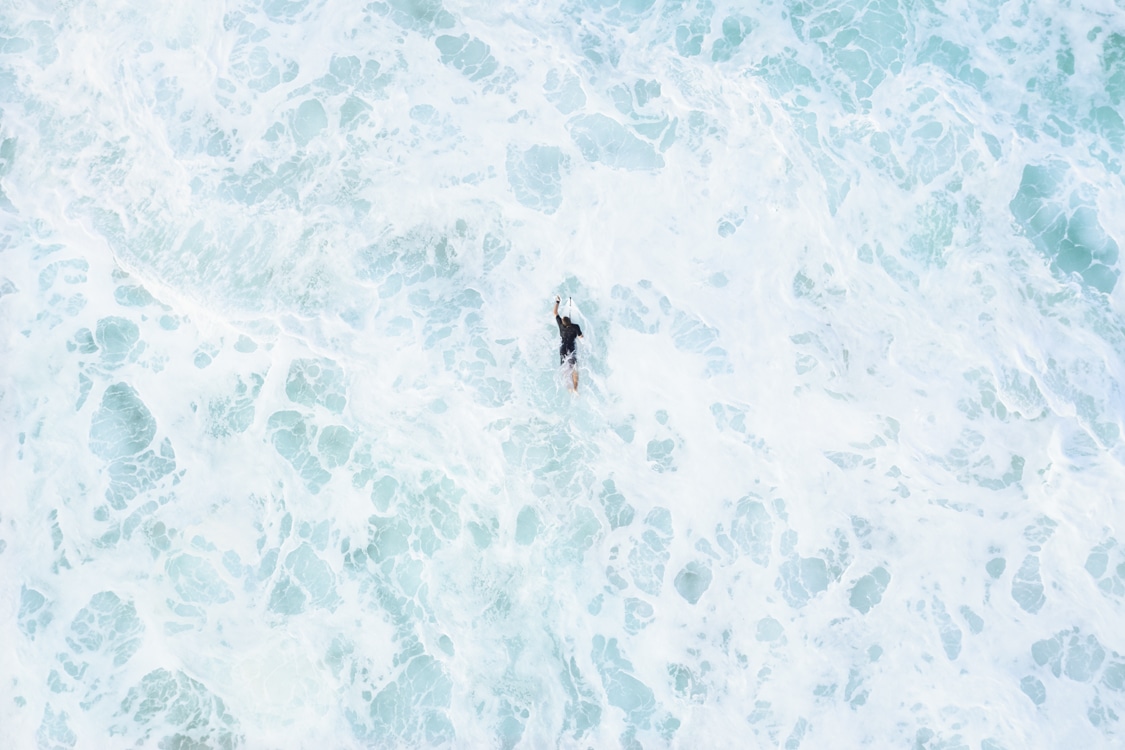 Breathtaking Photos of Ocean Waves Capture the Thrill of Surfing