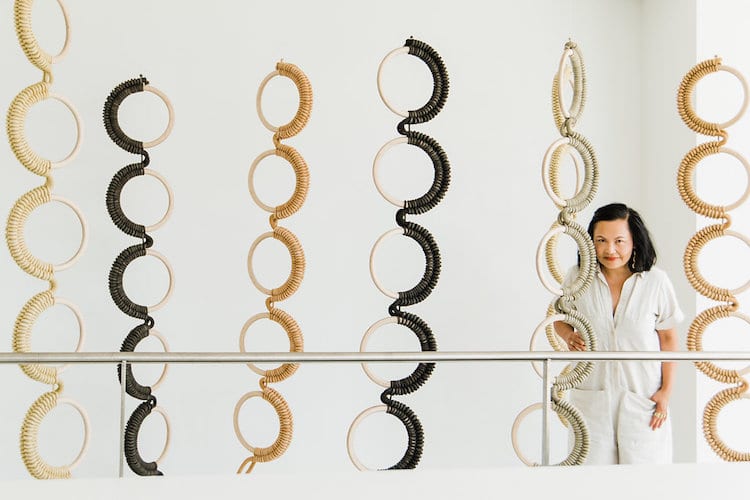 Knot tying has always been a key outdoor skill, but Chinese-American artist Windy Chien turns twisting ropes into a beautiful art form. Best known for her 2016 work, The Year Of Knots, Chien learned how to tie a new knot every day for 365 days. From mastering a complicated loop to perfecting obscure bends and hitches, this dexterous craft is now part of the artist’s daily rituals.

Chien was first introduced to knot tying as a child when her mother taught her how to macramé. She always held an interest growing up, but never found the time to pursue her creativity while working at her office job at Apple. After quitting her day job, Chien began to explore her love of knots and hasn’t stopped since. She tells My Modern Met, “My appetite for learning was enormous, and I wanted to learn them all.”

Since her initial The Year Of Knots series, Chien has been working on a number of exciting projects, including Ten Spinal Columns—an exhibition based on a type of sailor’s heaving line knot. At the end of 2018, Chien was artist in residence at the Local Language Art gallery in Oakland, California. Here she exhibited a series of creature-like splice knots that twist like “a biomorphic organism dividing and growing, consuming itself and others.” Chien then went on to complete a sculptural exhibition for National Geographic Society in Washington, DC. For this project she turned robes into “geometric abstractions of natural forms such as mountain peaks, valleys, and waves.” No matter what she’s working on, Chien currently has become a master of her unique art form, showing there’s no end to what she can do with a piece of rope.

We recently caught up with Chien to ask about her fascinating knot projects. Read on for our exclusive interview. 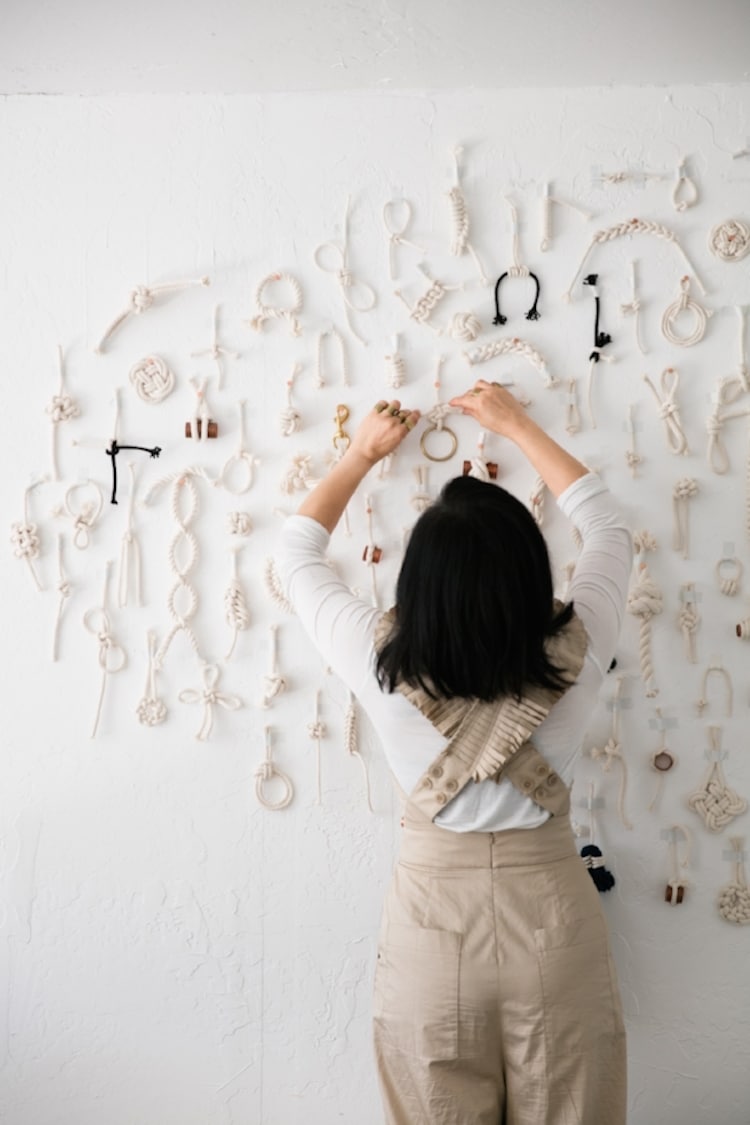 When did your fascination with knots begin?

My mom had taught me macramé in the 1970s, and I remember loving it, but we only did it once. As a young adult, I had collected knot tying books, but never even opened them up to make anything. So I felt an early strong attraction there, but actually learning knots felt daunting. It was only when I had quit my job at Apple to focus on my own creativity, for the first time in my life, that I took a macramé refresher workshop. Within five minutes, I fell back in love with the repetitive motion of knotting. It wasn’t until 2016, when I learned one knot every day of the calendar year, that I realized macramé knots are but a small subset of the much, much larger world of knotting. A world I couldn’t get enough of. My appetite for learning was enormous, and I wanted to learn them all. 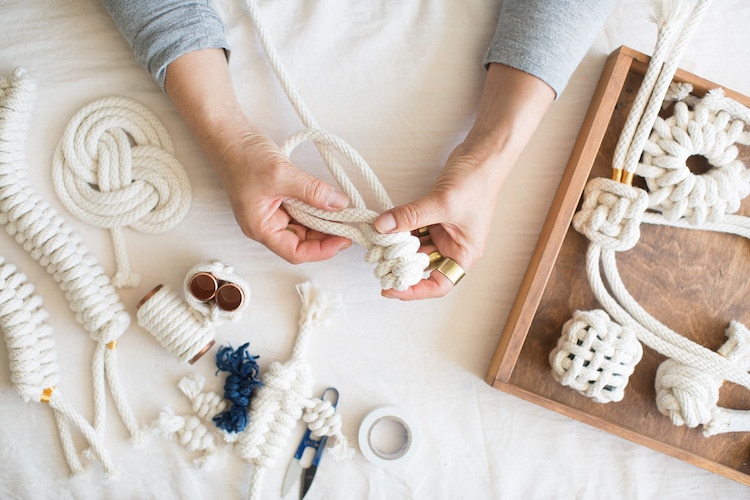 What did you enjoy most during the process of your The Year of Knots series?

EVERYTHING ABOUT IT. The entire experience was incredibly enriching, and it changed my life. I discuss all of it in detail in my upcoming book (The Year of Knots, Abrams, coming Fall 2019), but briefly – the knots were a history and cultural lesson, an entry to the state of flow, and my art school. Most importantly, the knots were a new language. Every new knot I’ve learned is like a letter in a new alphabet. Alphabets form words, and words communicate. So the knots were my new language, and via the experience of learning the language over the course of the year, I found my voice. All of my subsequent work has been based on the knots I learned during that year. 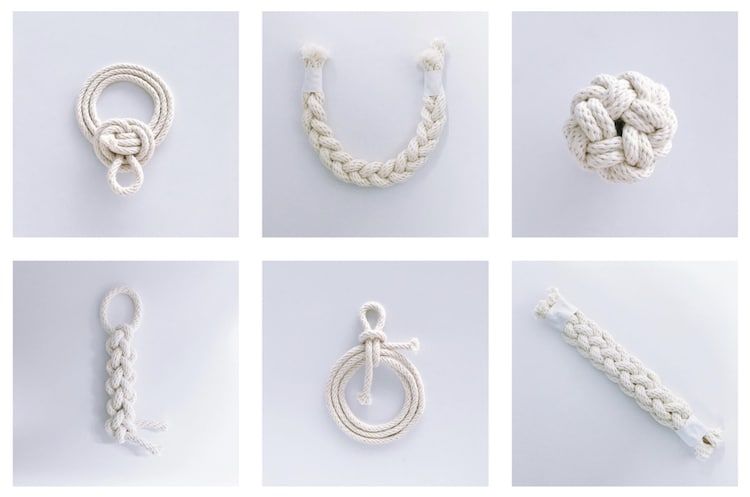 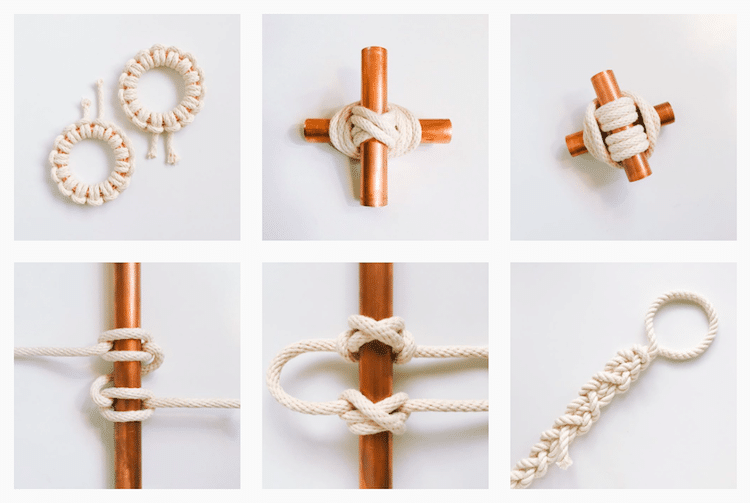 Are you influenced by any traditional textile crafts?

My work sits at the intersection of science, function, and aesthetics. I’m primarily interested in the knots as perfectly designed aesthetic objects, and in the journey of the line through the knots, and in that way they have more to do with engineering and graphic design than textile traditions.

That said, jacquard weaving has been rightly pointed out to be an early form of punch card computing, which is incredibly fascinating.

Do you have a favorite knot?

Don’t make me choose amongst my babies! But if I had to pick, it would be the family of button knots. Button knots are characterized by the fact that the line enters and exits the knot at the same spot, like a flower stem. The Star Knot is my favorite. When I first made it during the Year of Knots, I spent two hours trying to learn it from dusty old sailors’ knotting books, to no avail. I finally gave up and resorted to YouTube, where I finally learned it. Today, I make this beautifully complicated knot to relax! 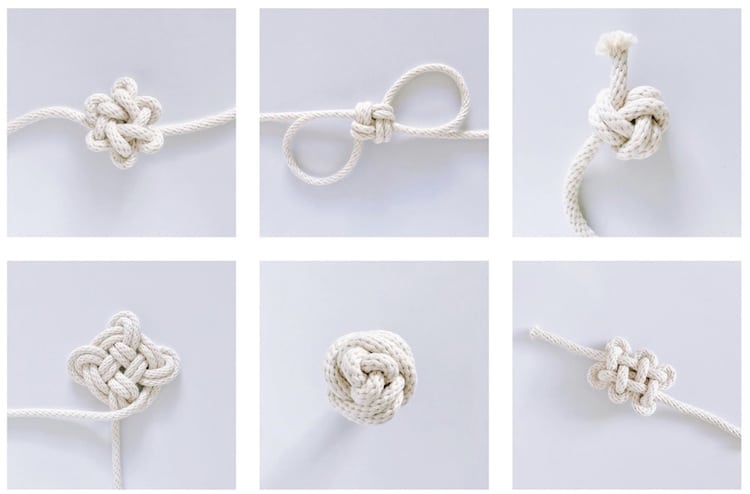 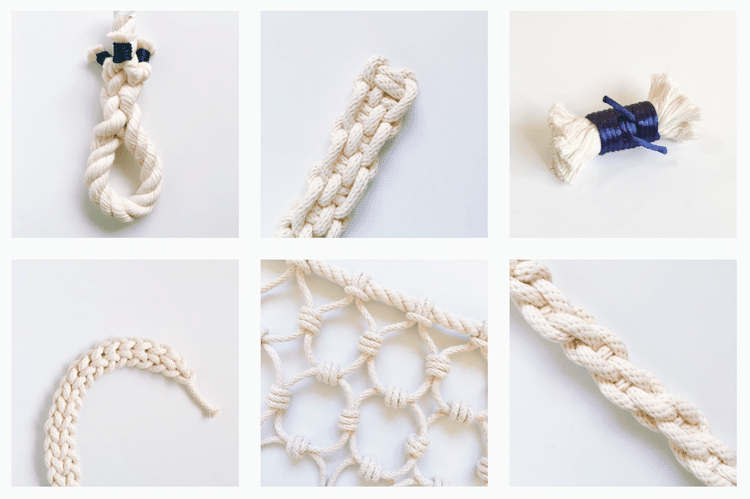 What does an average day in your studio involve?

I still start each day by learning a new knot. I’ll never run out; there are more than 4,000 documented, named knots, with a theoretically infinite number possible. It puts me into the state of flow. After that, I’m ready to continue working on commissioned pieces and to plan upcoming large scale installations. 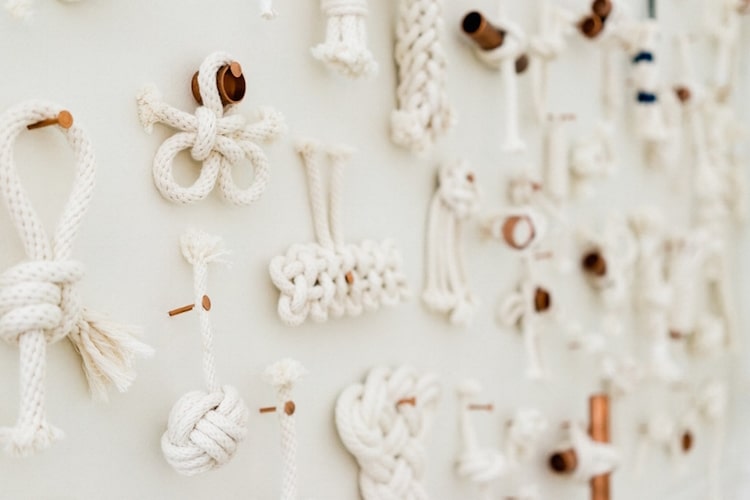 Can you describe the inspiration behind your Ten Spinal Columns installation at the College of Marin?

During the Year of Knots, I’d sometimes learn a knot and it would have such a life and vitality to it, that I knew an entire body of work could spring from it. Such is the case with the Spinal Columns. They are based on a type of heaving line knot, the knot sailors tie at the end of a line in order to throw rope from ship to shore. I typically only work in white or other natural colors, the better to emphasize what I find interesting about knots—the line—but in this case, we dyed the ropes using plants foraged from the college’s campus, whose land had once been an arboretum. It tied the piece back to the land in a meaningful way. 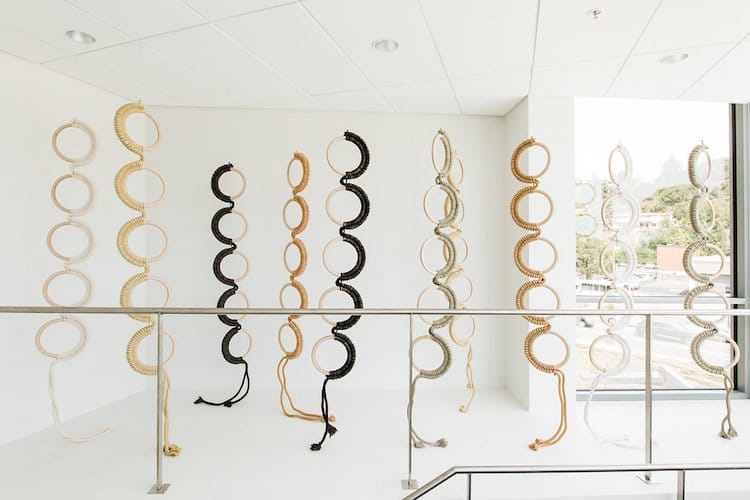 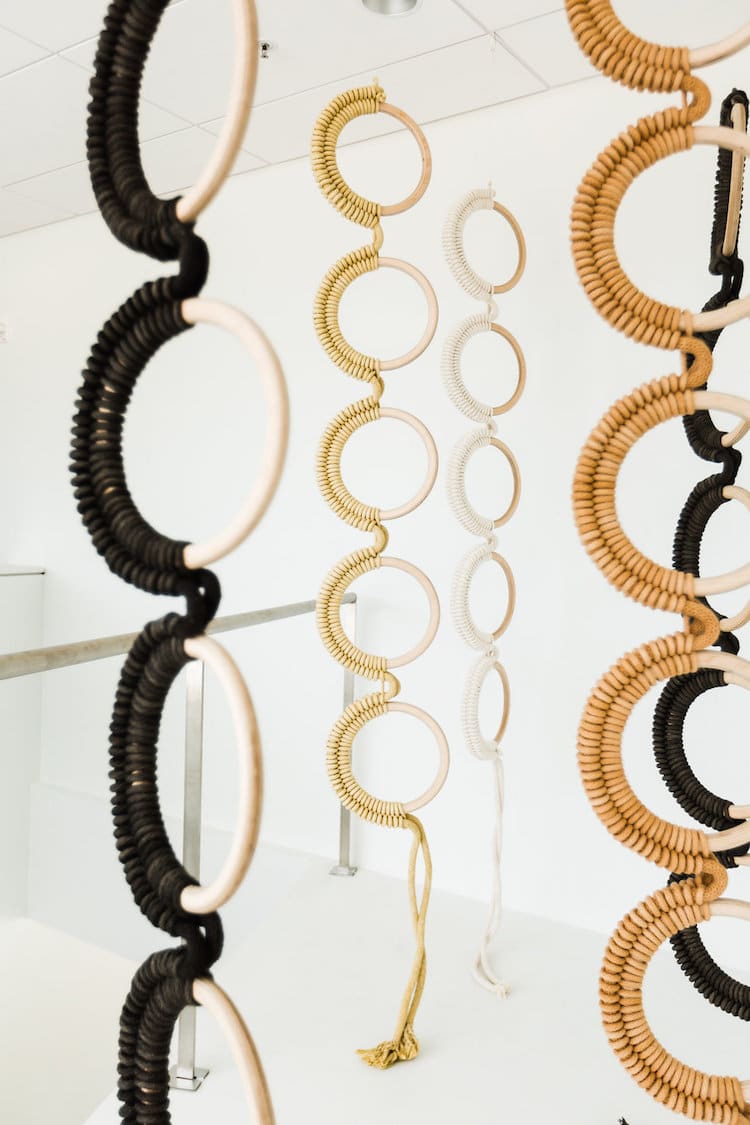 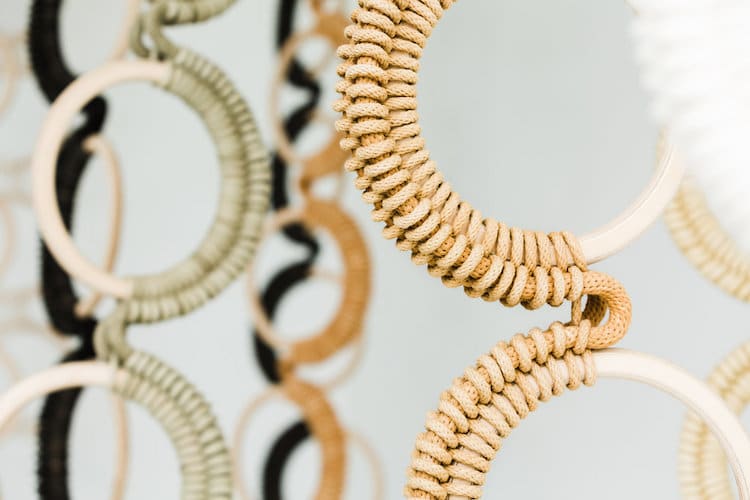 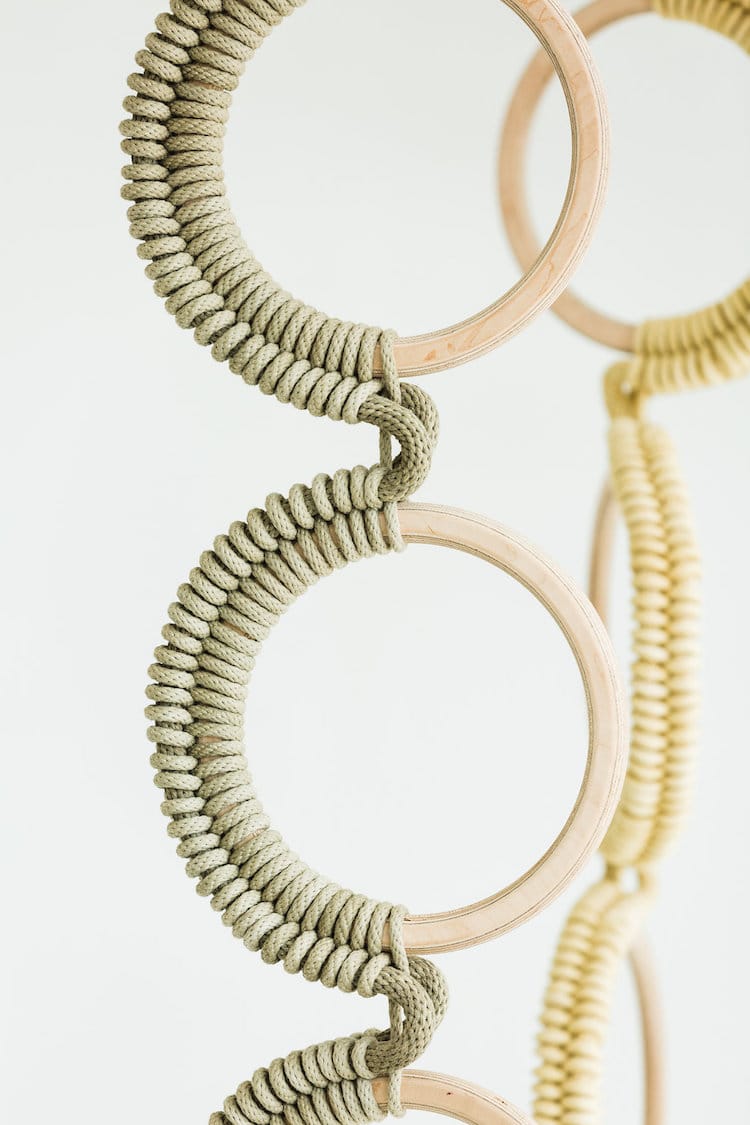 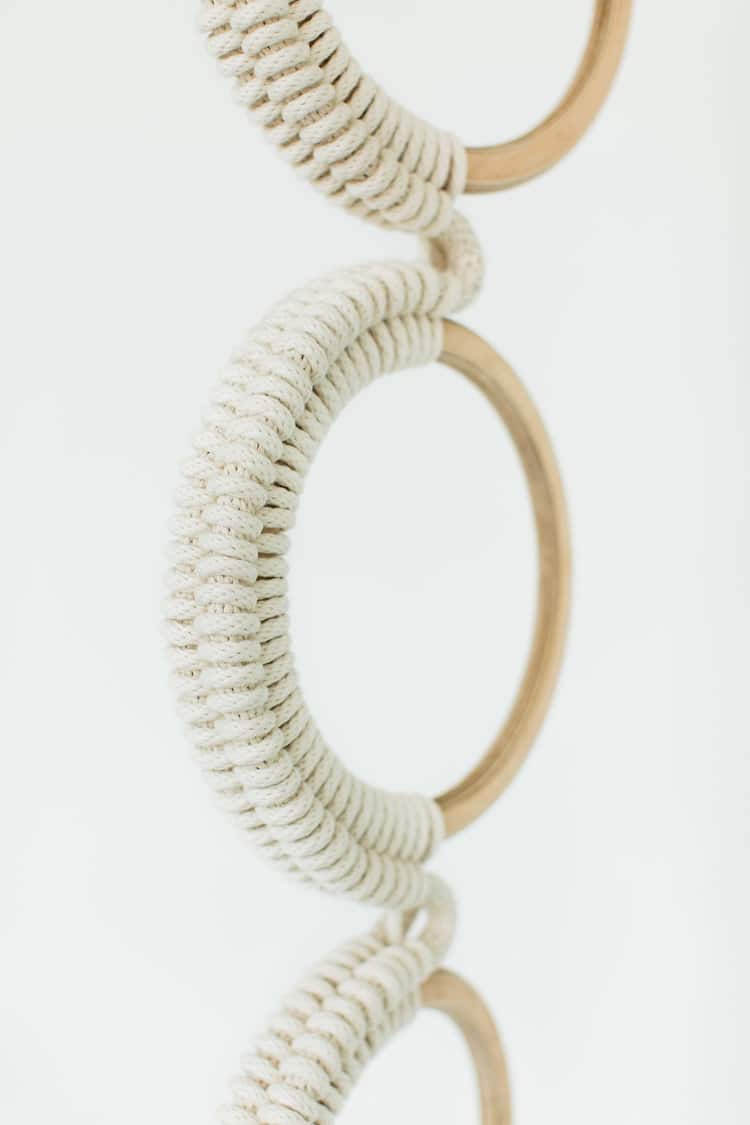 Can you tell us a bit about your recent Mutations show?

This was another case of going deep with a knot family I learned during the Year of Knots—splices. Splices are utterly fascinating. You unfurl the rope into 3 or 4 strands then marry them to another rope part, like the rope is a biomorphic organism dividing and growing, consuming itself and others. To me, these animal, fertile knots are palpably alive. 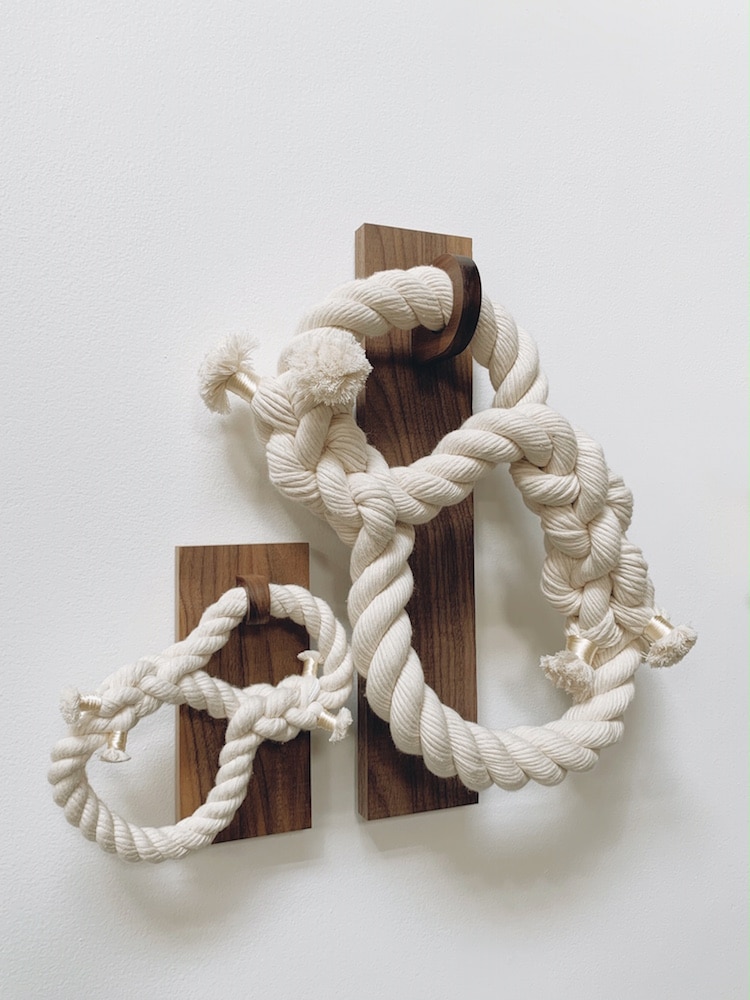 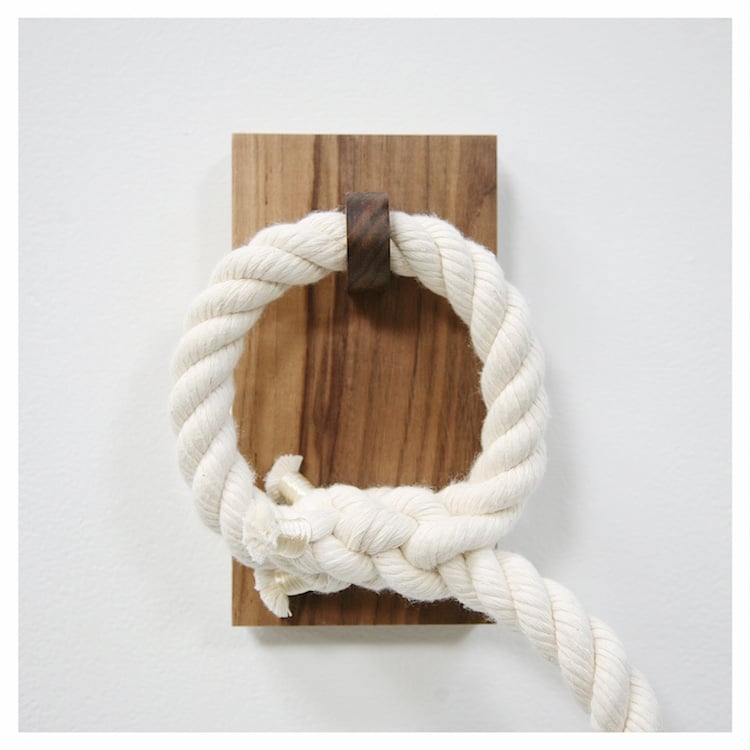 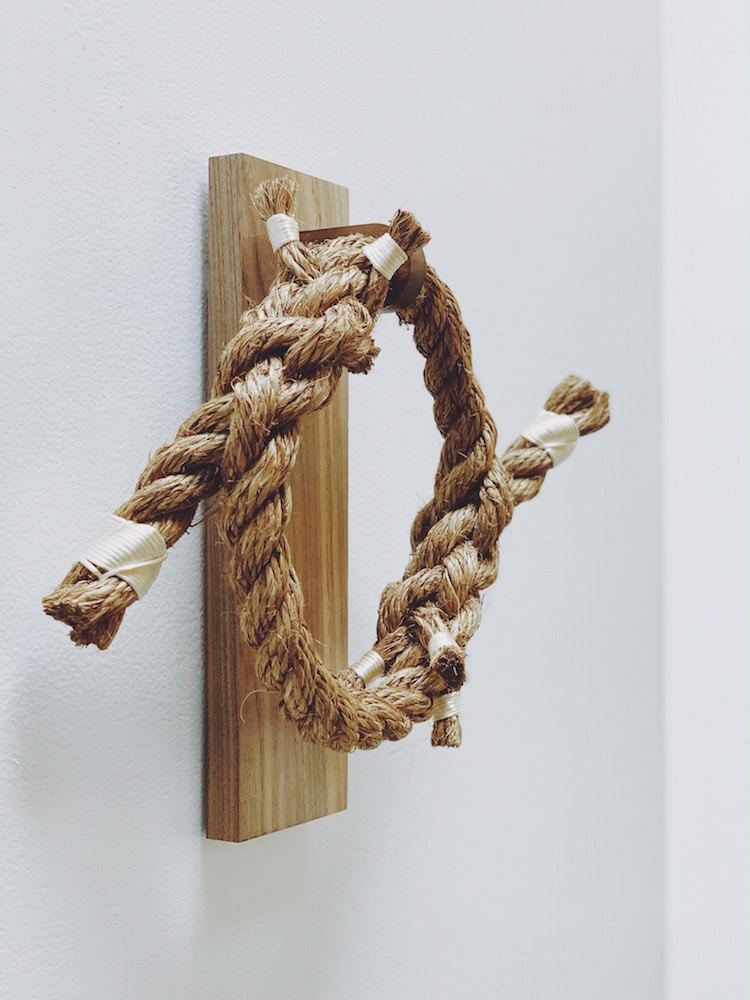 In December 2018, I completed a series of Quilted Planes for the National Geographic Society in Washington, DC. At 24’ x 6’ x 1’, they are 3D sculptures suspended from the ceiling so that one can interact with the changing kaleidoscopic vistas as one moves around and under them. The shapes are geometric abstractions of natural forms such as mountain peaks, valleys, and waves. They also resemble quilts, where each piece is made by a different person (in this case, my assistants) and the whole is constructed from disparate parts. And in a beautiful turn of events, these disparate parts were actual ropes used by some of NatGeo’s explorers. One of the ropes had been utilized in the second ever descent into an active volcano. These were precious materials I was honored to get to use. 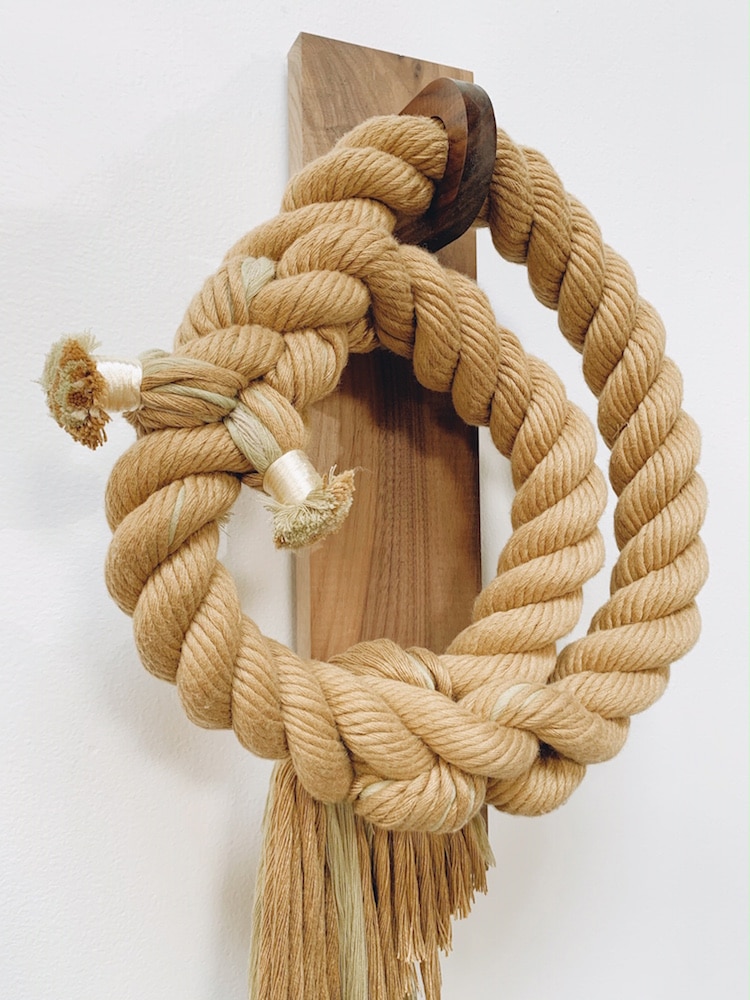 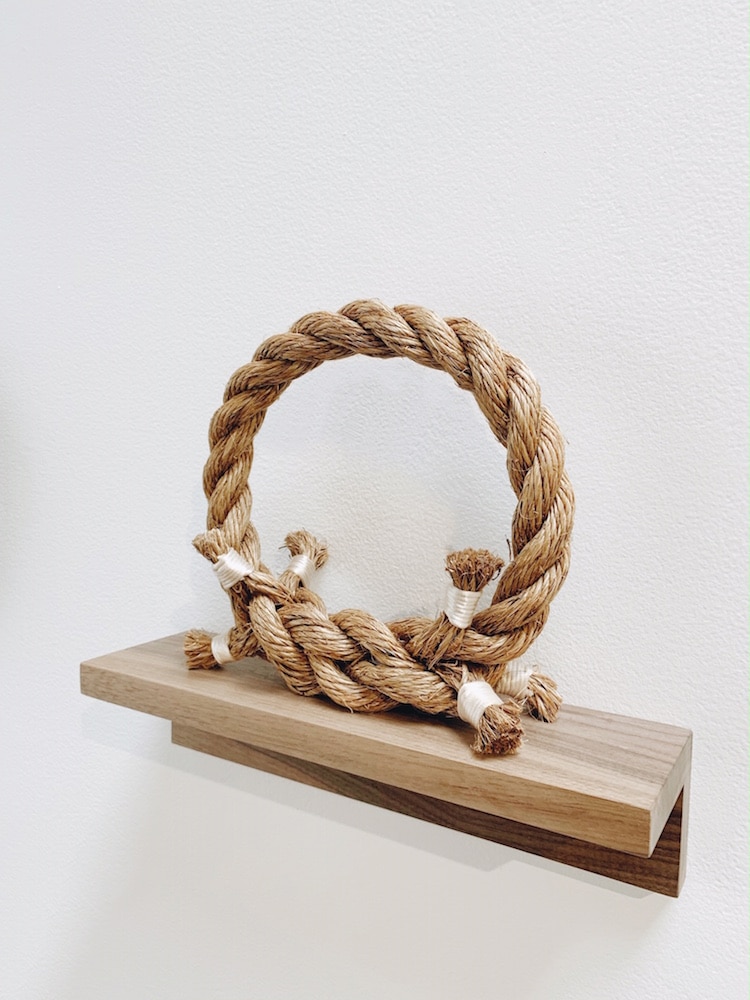 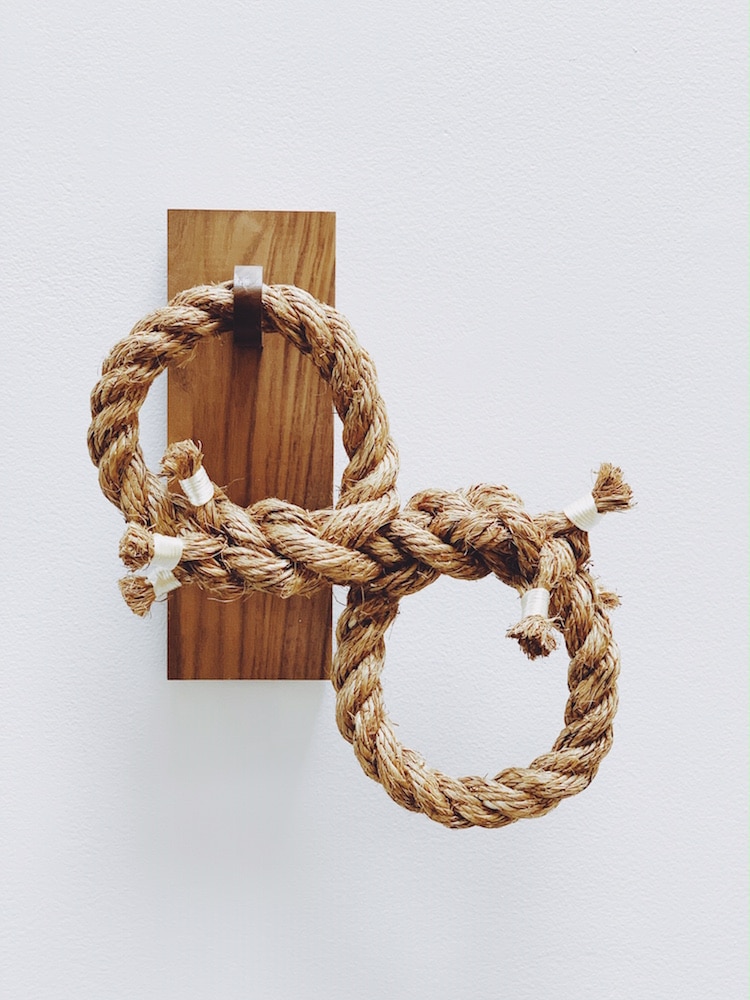 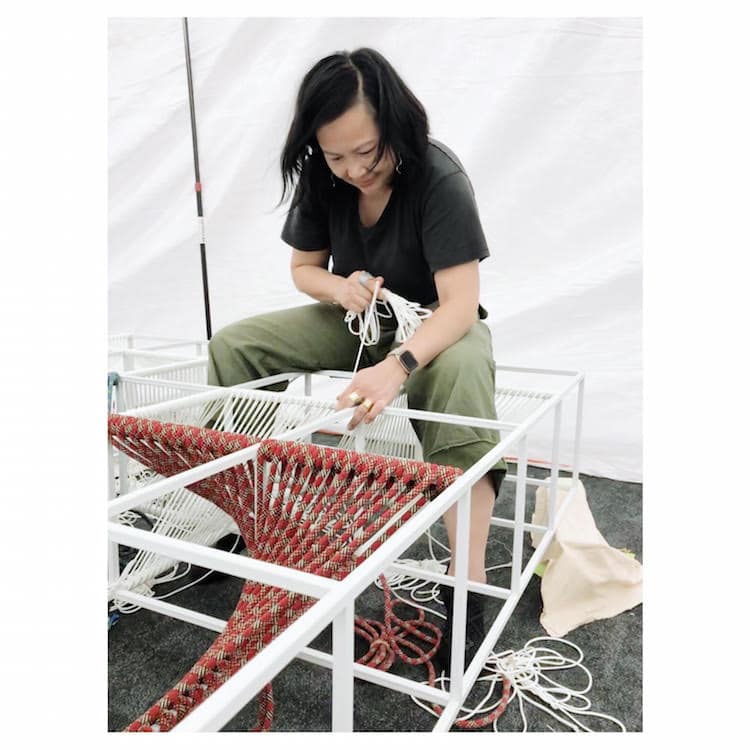 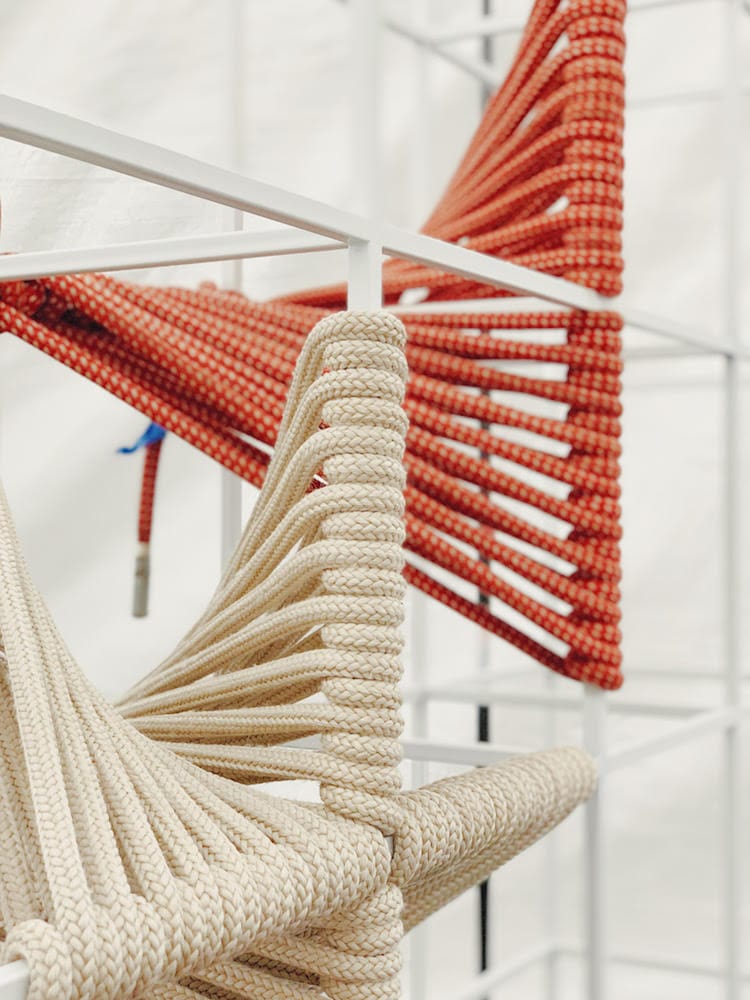 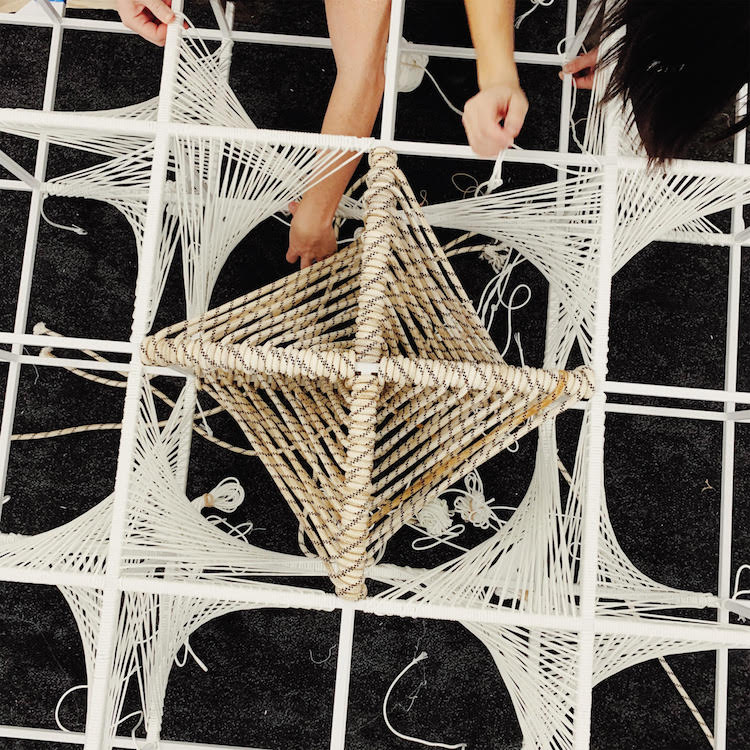 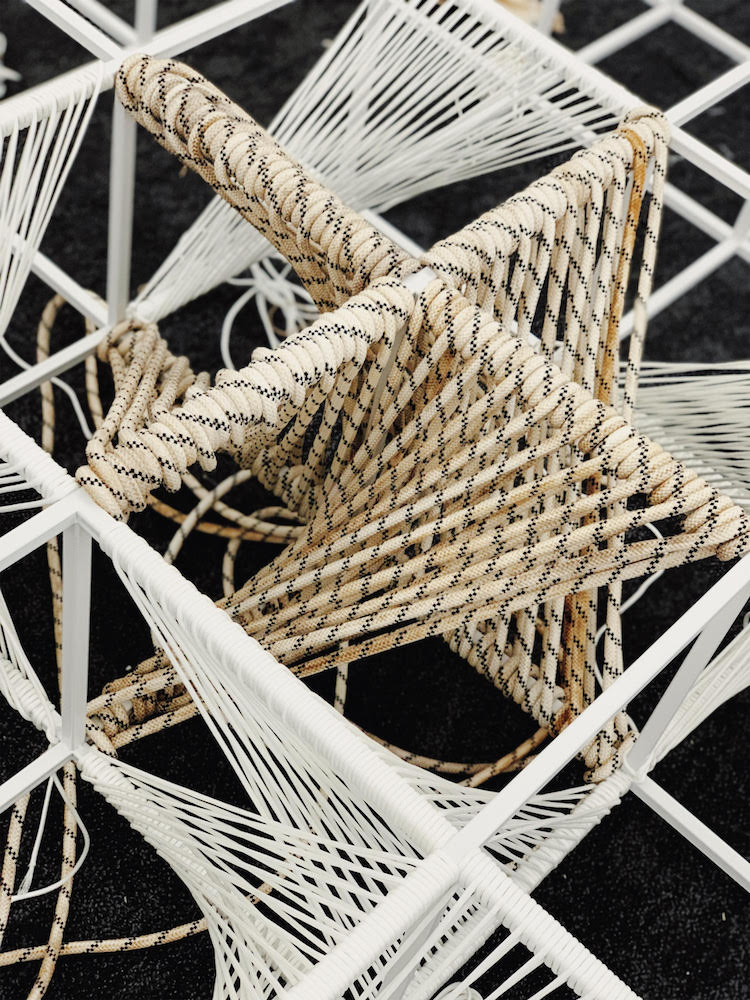 My Modern Met granted permission to use photos by Windy Chien.

Modern Macramé: How an Ancient Fiber Art Has Resurfaced as a Beautiful Craft

Best of 2018: 12 Breakthrough Makers Who Got the World Excited About Arts and Crafts

Artist Suspends 600,000 Tied Knots Over a Historic Plaza in Spain

8 Contemporary Artists Taking String Art to the Next Level