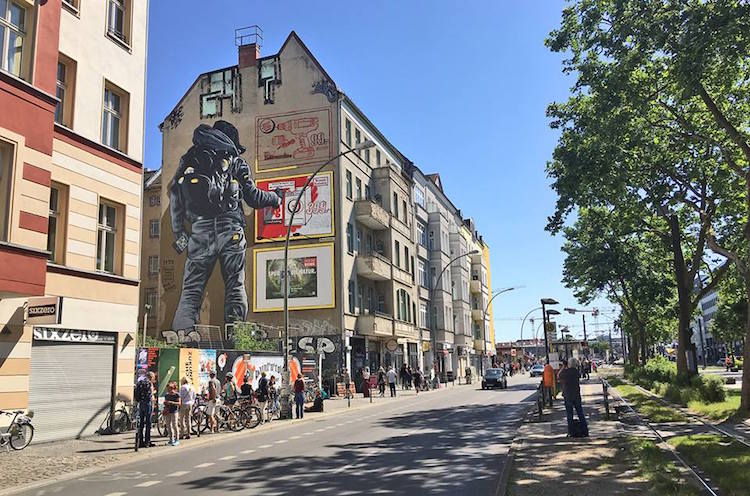 “There’s no such thing as bad publicity” Berlin, Germany.

Like many street artists, French artist MTO (real name Mateo) is something of a mystery. Over his 10+ year career, his identity has been kept a secret, but his body of work speaks for itself. MTO first started spraying in 2008 in Barcelona, when he was introduced to the art form by the TWE crew. While living in Berlin from 2006 to 2013, he earned his status as a respected graffiti artist among the street art scene for his larger-than-life, photorealistic mural portraits of various figures from pop culture. Since then, his style and concepts have evolved to respond to the digital age and each unique urban landscape he visits.

From hijacking Google Earth’s Street View to painting a “giant heart shape digital cannonball” crashing into a building in Ukraine, MTO’s most recent works explore the culture and political climate of cities around the world. Each project visualizes powerful messages that merge with and twist reality, giving urban spaces new meaning.

We had the rare opportunity to ask MTO about his background, past projects, and future plans. Read on for our exclusive interview. 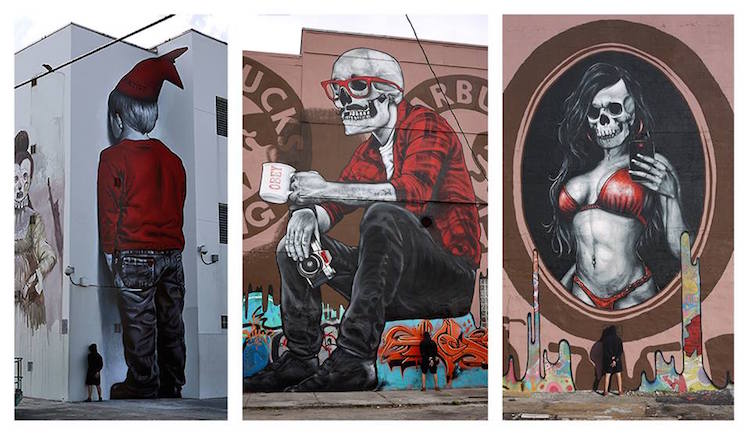 When did you first become interested in street art?

When I was a teenager I discovered art history and quickly had some interest for artists working outdoor like fluxus, dada, land art, etc which was then more described as “contextual art.” When I studied in art school I experimented a lot with outside activities and was surrounded by many other interesting students doing contemporary art in the streets or graffiti. It’s only years later that I first heard about the rising so called “street-art” scene.

Who in the street art scene do you respect the most?

Mostly guys that have something meaningful to say with their work and don’t hesitate to be clear about it. I would mention Blu, Banksy, Escif, icy & Sot, FraBiancoshock…just to name a few. Those are the first names to come to my mind. 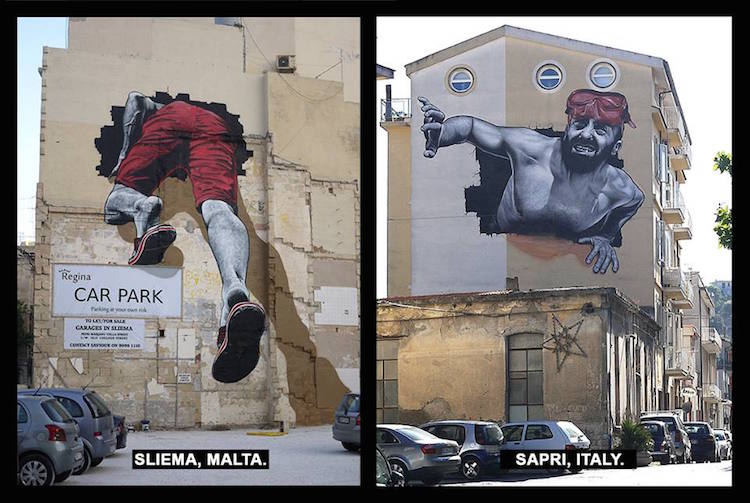 Your large-scale murals are impressively hyperrealistic. Were you ever classically trained in painting?

No I wasn’t; although I drew my whole life, and did photography and graphic design, which trains you to work with images. But I never painted before my mate Arone (TWE) put a can in my hand for the first time in 2008. I do appreciate the compliment but my work isn’t hyperrealistic. Any XXL figurative work, whoever painted it, becomes hyperrealistic because of the size of the surfaces and the impression it does on the viewer but in terms of painting technique it isn’t. To me, hyperrealism is painting that shows more detail than the eye could see from a correspondent distance/scale. And to be honest I don’t feel myself so much like a painter.

I don’t have much passion for the representation technique. I feel more like a free-hand printer for ideas I create with photos, Photoshop, etc…I’m more pushing my conceptual limits than technical ones. You can see the difference when you look at the work of guys that are actually real painters like Eron, Axel Void, Etam Cru, Onur & Wes. My absolute favorites are Zoer and Sebas Velascos. These guy’s work often leaves me speechless. The technique is on a completely other level. And they actually used to regularly paint together, that which looks like a Dragon Ball Z power fusion. Their collaborations are out of this world.

What is the significance of your black and white aesthetic? A lot of your pieces also have hints of vibrant red. Does this color have a particular importance to you?

That came from the fact that I got introduced very young to analog photography and film development by my father who’s a passionate amateur photographer. Black and white images and the red light of the development room.

How do you decide which people to pay homage to?

When I started ten years ago I spent the two first years of my career painting homage portraits dedicated to cultural productions. That only was a way to train to use a spray can as well as a way to introduce myself in the vibrant Berlin scene. However, that might also have been my biggest mistake because I gave my only long interview at that time, with no specific idea how things were going to turn for me. Consequently, even if I spent the next 8 years doing political and conceptual works, most people keep identifying me as a “celebrity sprayer” (which I hate) and living in Berlin (which I left 5 years ago). So it’s been 4-5 years at least that I didn’t pay homage to any person in particular (unless exceptional projects), but rather try to articulate concepts, sometimes on an illustrative way, which could include human figure, sometimes not. 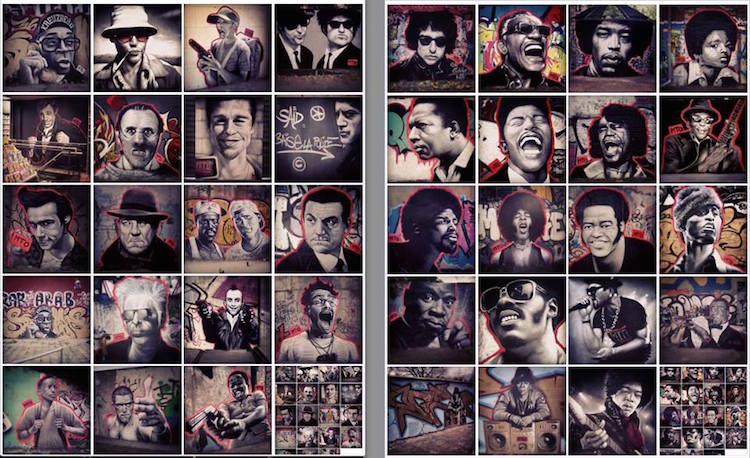 Can you describe your planning process for one of your murals?

I make as much research as I can on the locations. Then I take a few days on spot to observe the wall, speak with people, try to understand the local problematics, and find an angle that interests me. Then I turn it into a visual idea (it could be political, funny, poetic, absurd … ) and try to make a photo sketch with the material I have. Then I paint it.

For walls over 3 meters high I use some grid techniques. No projector: NEVER. I consider projector as cheating, but its a controversial topic. Some say a grid is cheating too but I don’t think so and I don’t care about anyone’s opinion on the topic. My technique matters less than the concepts anyway.

My goal is to connect my work with the place it is situated, for better or for worse. I find it very ignorant to come to a foreign country and just stick the last graphic variation of your work without paying attention to where it is and what it means to place it there. It is a colonialist attitude such as living in a foreign country and not try to learn the language. That’s actually ok for the original graffiti process (colonise the world with your logo), but as soon as you ask for permission or get sponsored to paint, then it is not graffiti anymore and I think you have the responsibility to use your space of expression to not just show yourself and speak about nothing…But hey! That’s just me!

How would someone recognize your pieces on the street? How would you describe their main characteristics?

For a long time, it has been gray-scale characters with some touch of red color. But It’s been now a few years that I started to challenge my own style by trying various approaches in the work. Such as the Tactical Media various series where I play with the concept of tagging as a media. For the Honest Glitches series where I created visual disruptions that mimic hackings inside the Google digital earth. For my first self sponsored solo show I created Cold blood, a series of black on red drawings under glass. I produce short videos to explain each work in one minute max on the Instagram page. So the work isn’t so much identified instantly by its aesthetic as it previously was. I’m evolving and searching for new things. 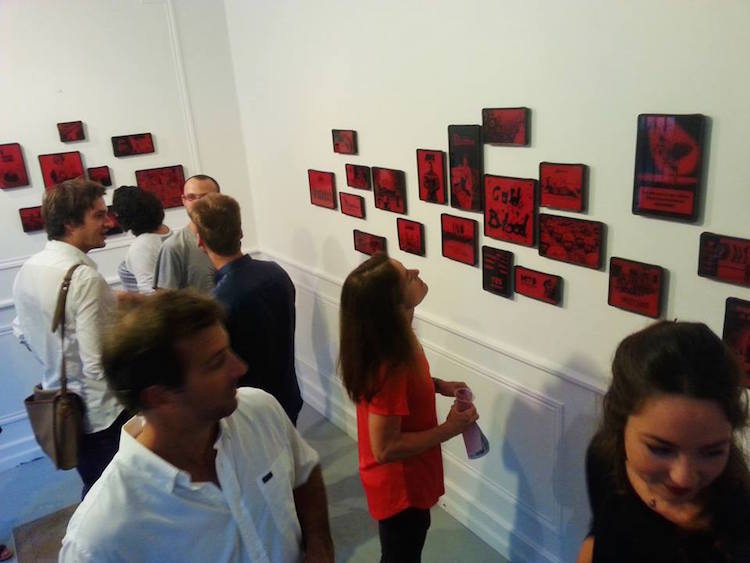 (continued) For instance, for a few years I’ve been exploring the use of simulacrum in my work. The very first time was in 2012 when I painted that giant guy destroying a house in Rennes, France. Between the character and the wall there is a layer of fake destroyed bricks that match in size and colors with the real bricks of the building. The simple elements are the layer that connect the reality of my character with the actual reality and makes your brain believe that there is a real interaction between the two. So it goes from a zoomed character represented on a wall to the idea of giant persona standing in front of you. This is what simulacrum is. A representation of reality to simulate its presence.

This layer is more and more present in my murals over the years to connect the (often) surrealistic ideas I represent with the reality where I paint. 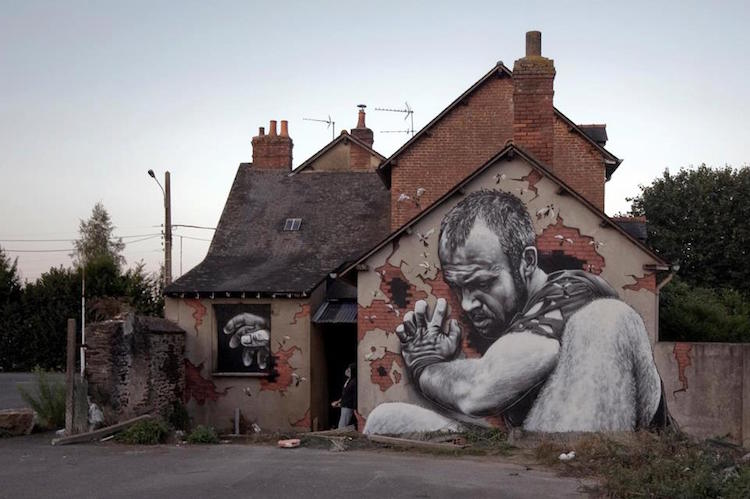 Next up: MTO’s most recent projects.

The post Interview: Clever Street Artist Uses Graffiti to Respond to the Digital Age appeared first on My Modern Met.