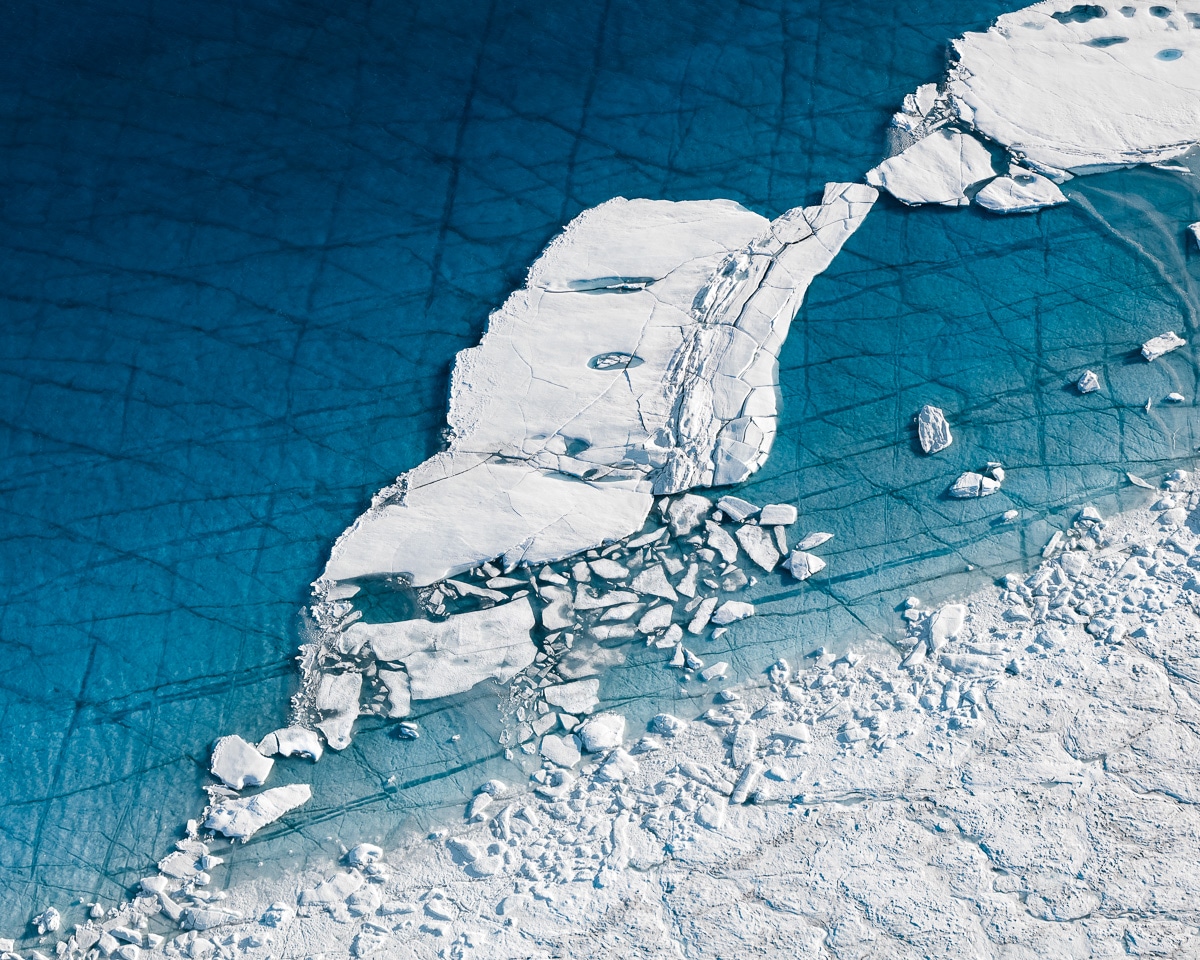 Aerial photographer Tom Hegen has dedicated his career to exposing how man has shaped the environment, and not always for the best. From engineered salt ponds to industrial tulip fields, these habitats are at once beautiful and frightening when one reflects on the consequences. It’s these consequences that are the focus of Hegen’s new series, titled two°celsius, which sees him taking flight over the Greenland Ice Sheet.

This vast body of ice, which covers about 80% of Greenland’s surface, is vulnerable to climate change and is already beginning to melt. Scientists predict that a 2 degree Celsius rise would completely melt Greenland’s ice, which would cause a global sea level rise of 24 feet (7.2 meters). With so much being said about the dangers of the Earth’s temperatures rising by 2 degrees Celsius, Hegen set out to get a first-hand look at the impact of mankind’s industrialization.

The resulting photos are deceivingly beautiful until one realizes that the turquoise that increasingly invades the photographs is only present due to rising temperatures and melting ice. Flipping from a nearly white, icy environment to a completely blue surface is a shocking reminder that global warming isn’t an abstract concept of the future, but a concrete reality of today.

We recently spoke with Hegen about his firsthand experience in Greenland and why he feels so strongly about using his art to raise awareness about how humans are shaping the environment. Read on for our exclusive interview. 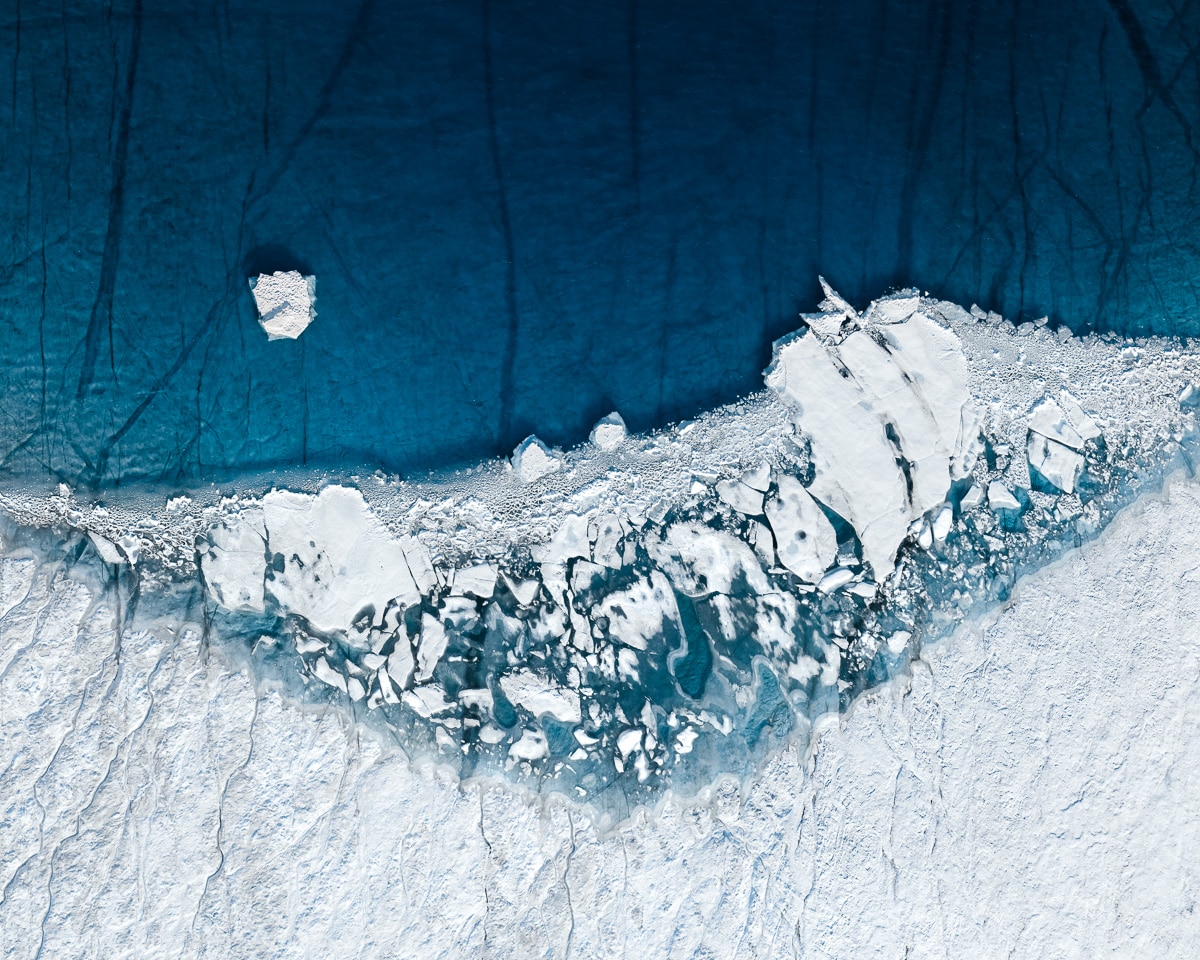 Two°celsius isn’t your first foray into photography that discusses the environmental impact of man. When did you begin focusing your photography practice in this direction?

It all started when I visited an exhibition back in 2015 about the suggested term Anthropocene. It’s a proposed term by a board of scientists for a new human area. Scientists around the world are recognizing that we as humans have such a strong impact on the geological, ecological, and atmospheric processes on earth that we have become the most impacting force on our planet. I wanted to access this topic with my own visual language and to start drawing attention to environmentally relevant issues to hopefully inspire people and to make a difference to our planet. 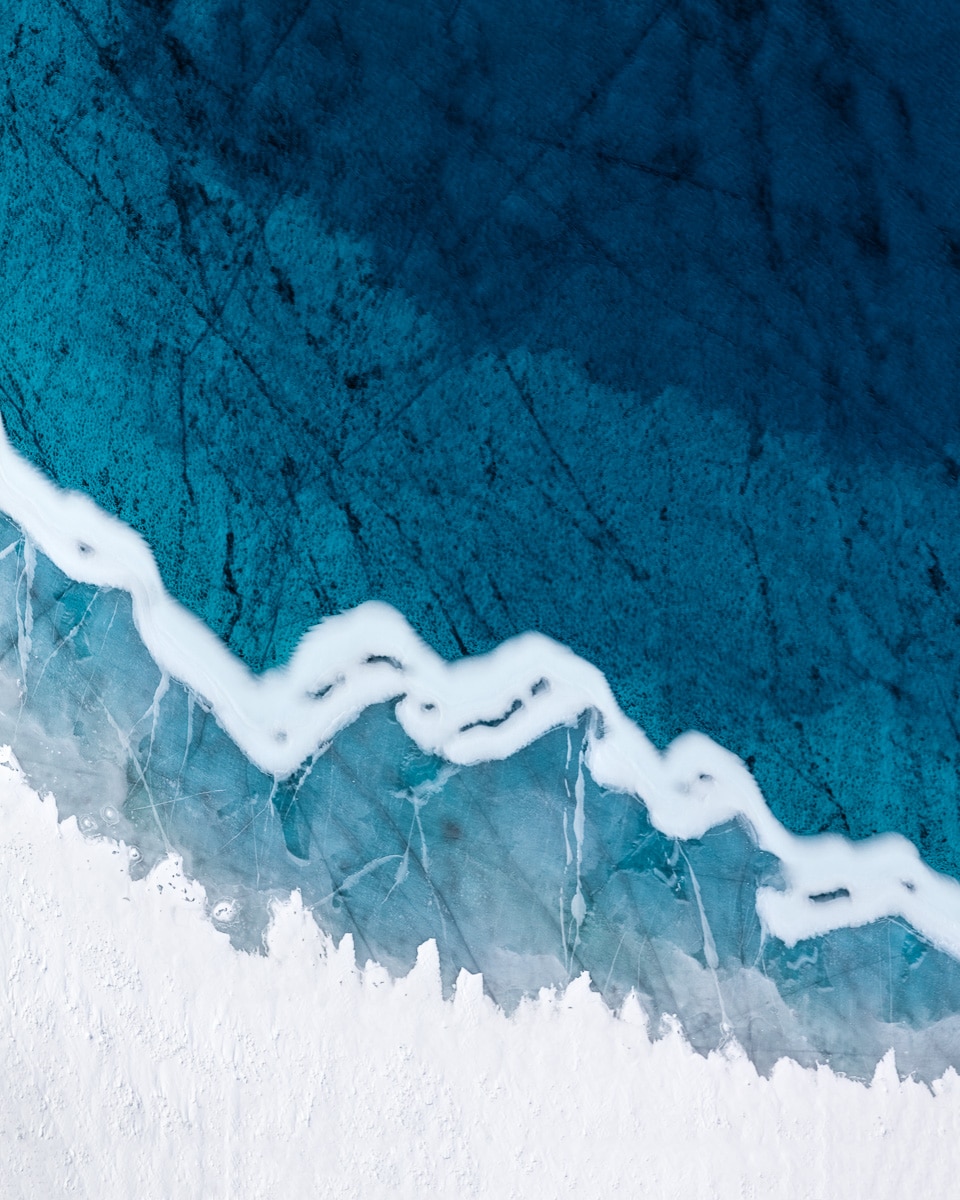 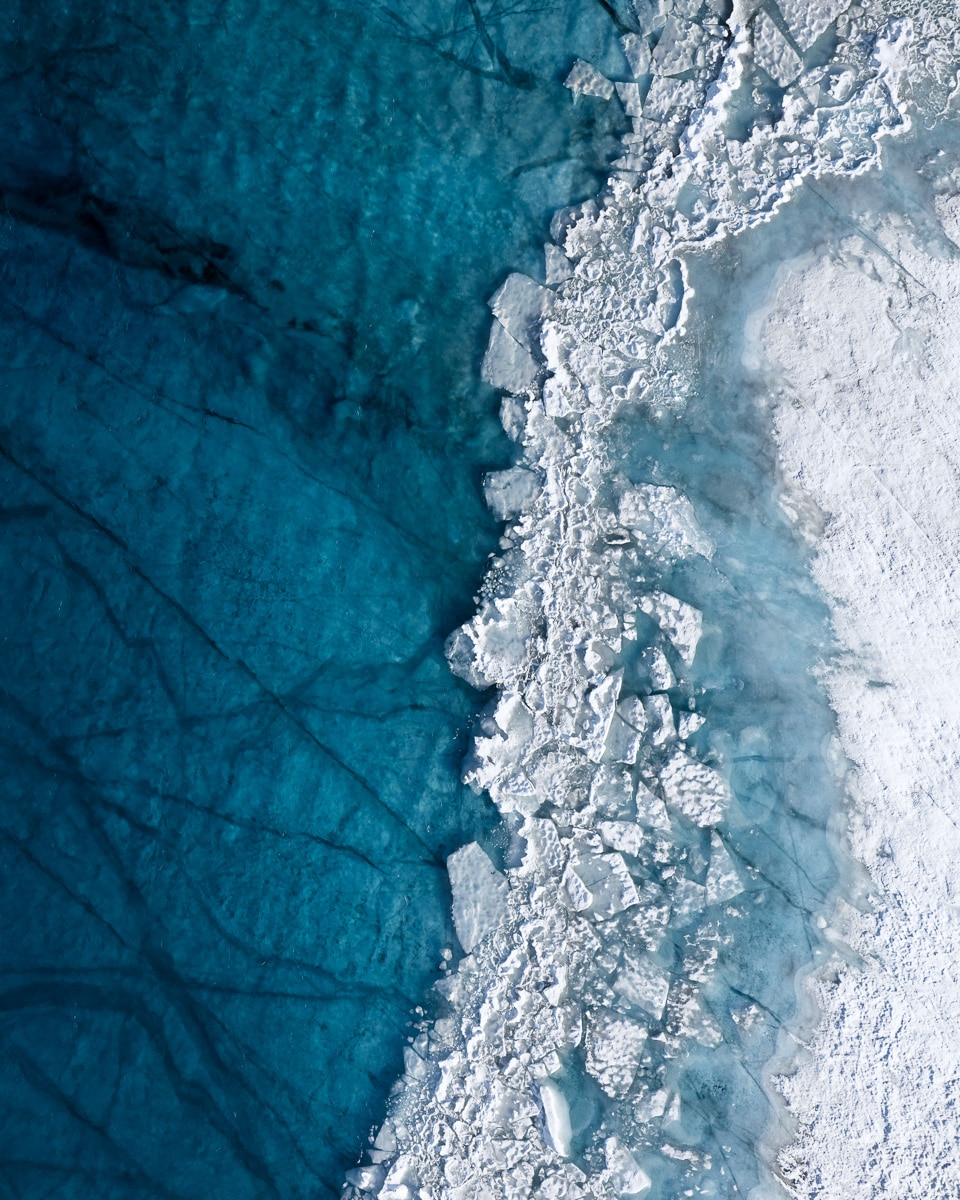 Why is aerial photography, specifically, the perfect way to express yourself as a storyteller?

Aerial photography provides one specific advantage: an overview. It simply enables us to see things that wouldn’t be visible from the ground. A forest for example. From the ground, it may look like pristine nature. Once you change the perspective and get an overview, you actually recognize that every single tree is planted on a grid system to make it easier for the cutting machines to go through the aisles. Aerial photography enables me to show subjects in connection to their environment and on a much larger scale. 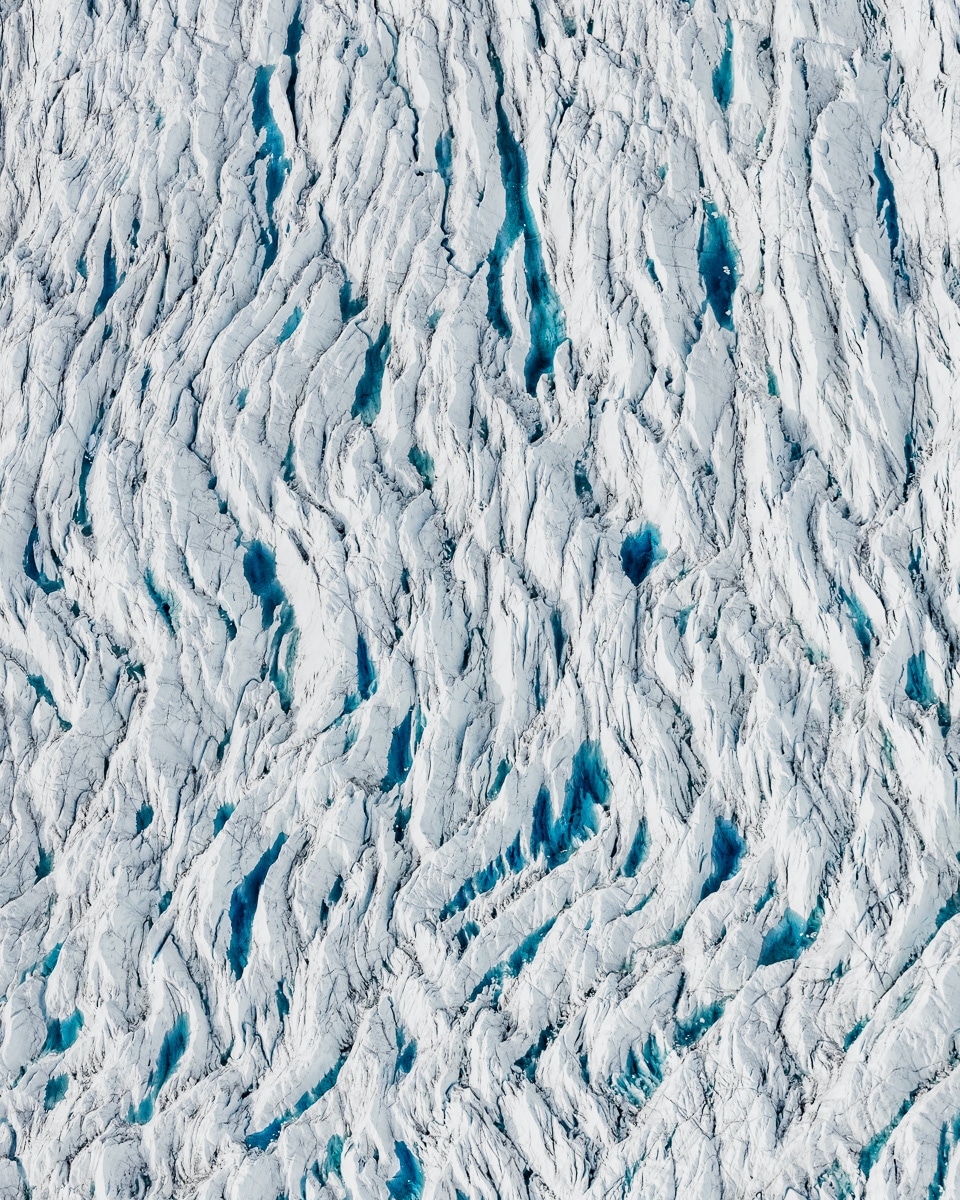 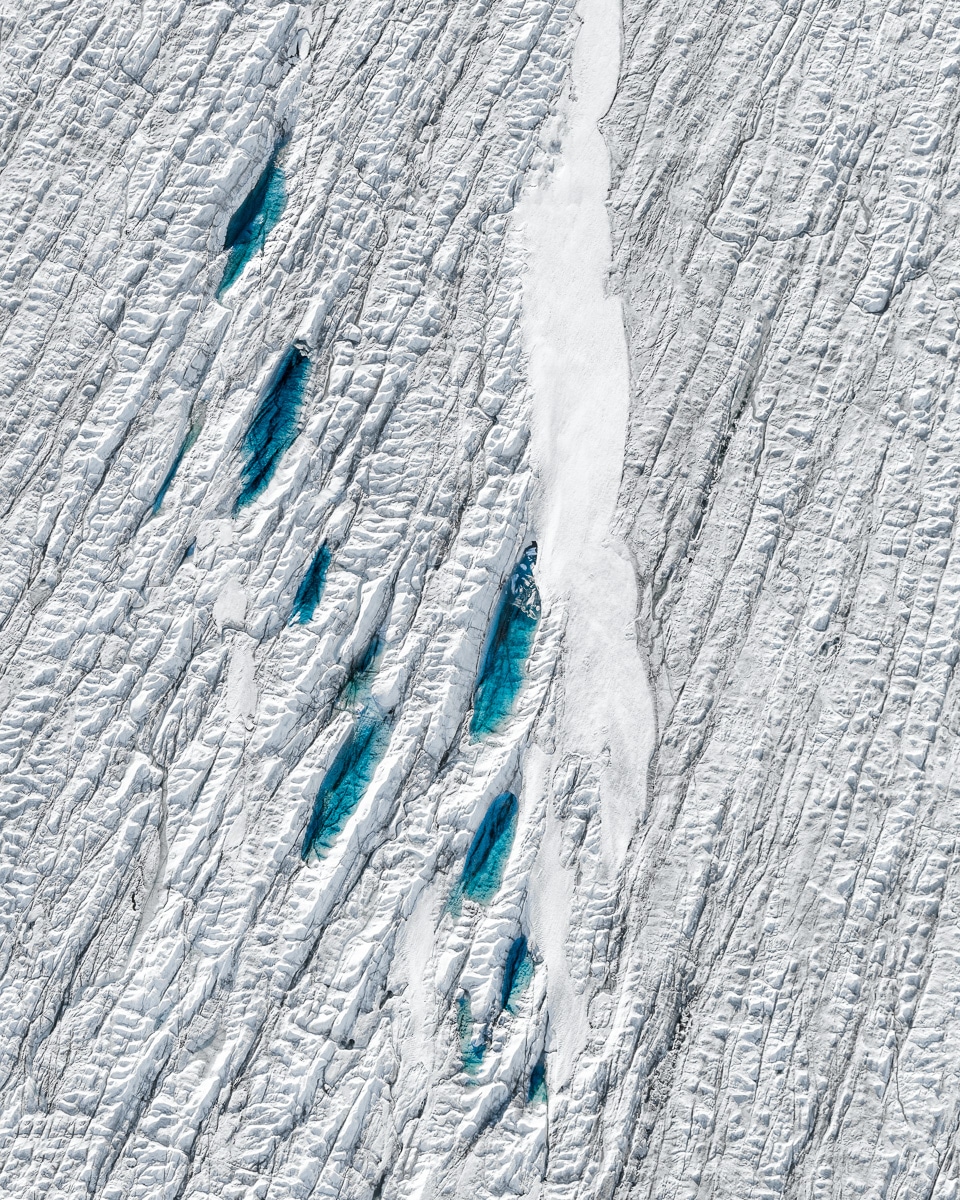 What inspired the series?

James Balog’s documentary Chasing Ice shows the effects of global warming on some of the remotest places on our planet. He also focuses on melting glaciers in the Arctic. The melting of the Arctic ice sheet is a place where climate change gets visible at first glance. 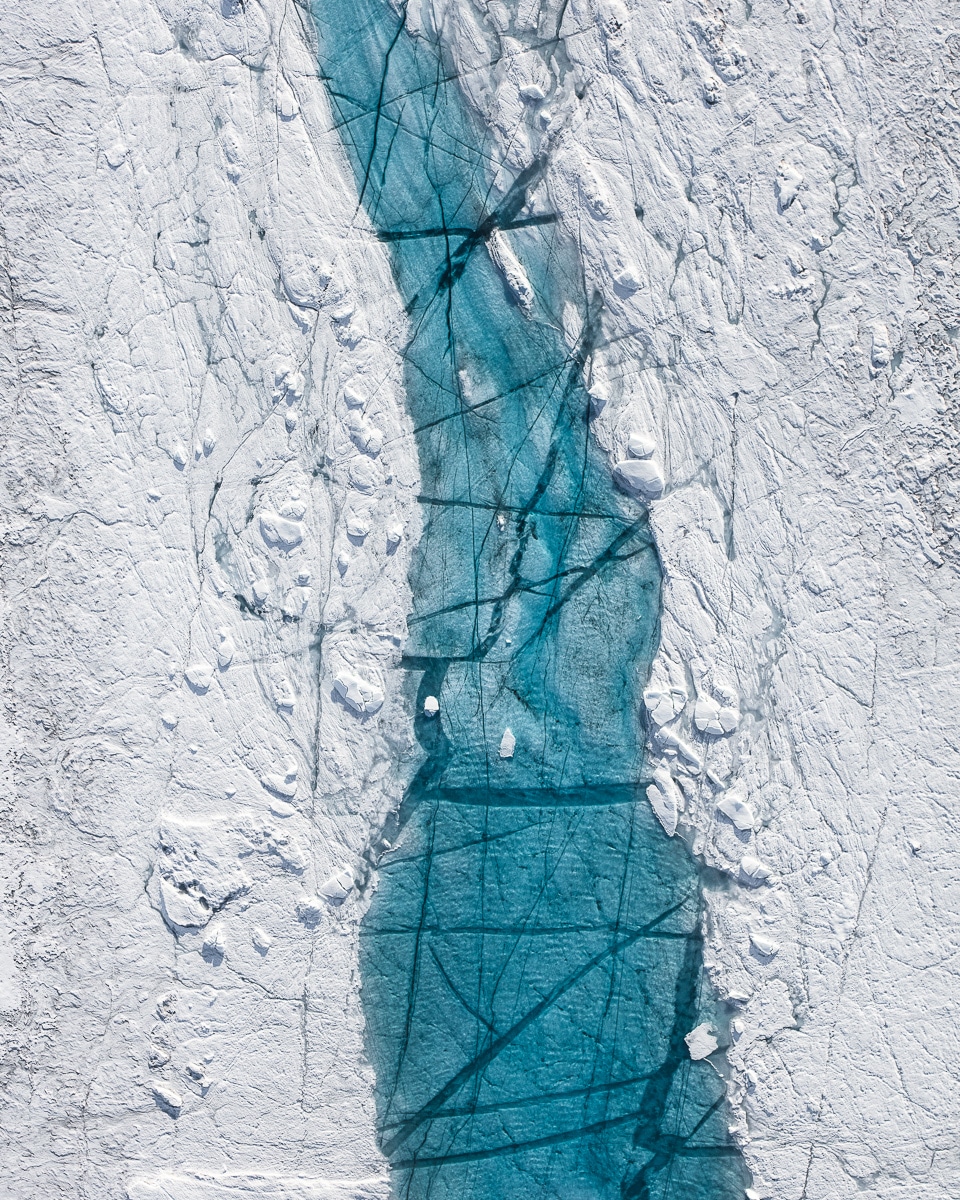 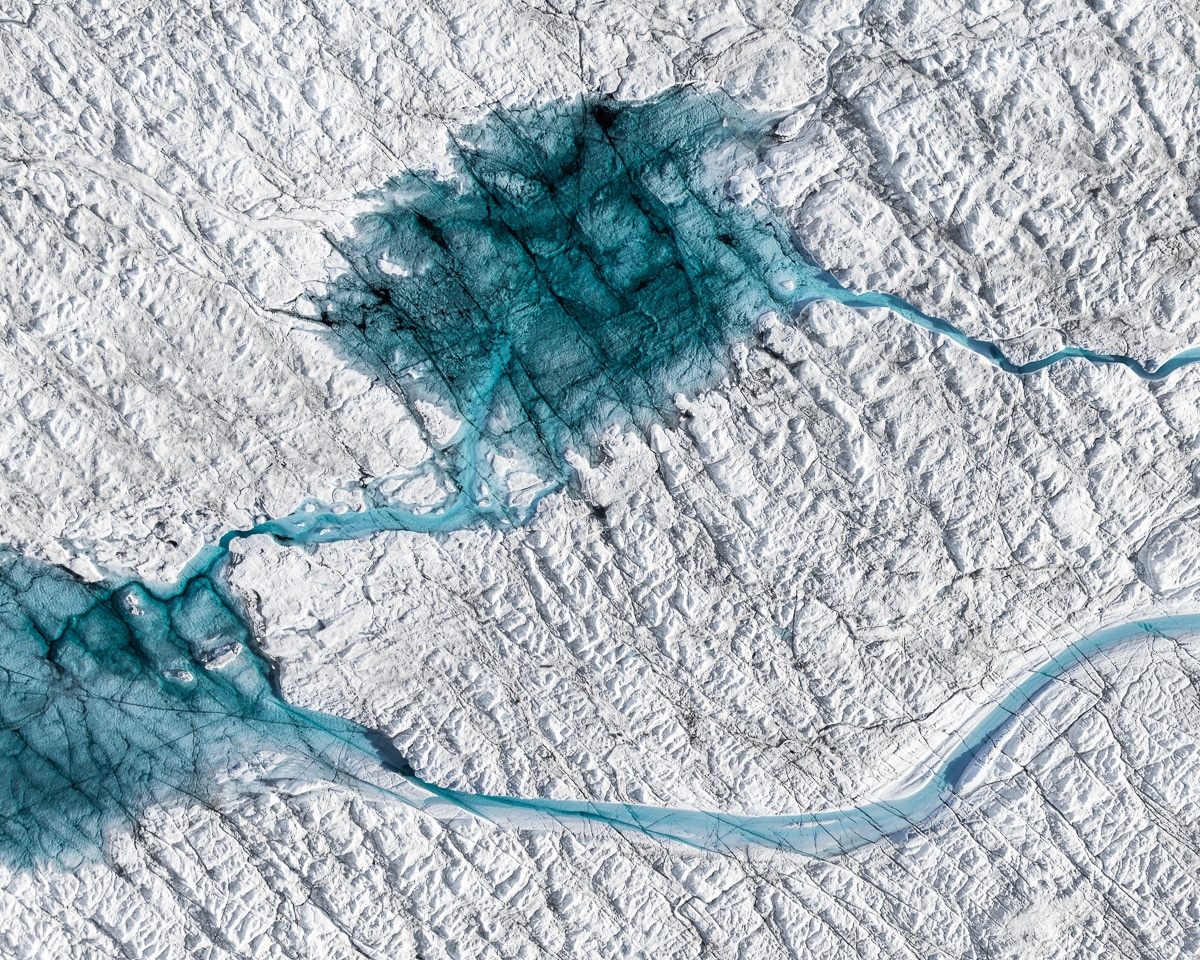 Why specifically Greenland for this series?

Greenland, and the Arctic, is the fastest warming place on this planet, providing the first indication of how climate change is having an impact on the earth eco-system. For the past couple of years, scientists have also started recognizing the effects of global warming in Antarctica, not in the same way that the Arctic is affected. 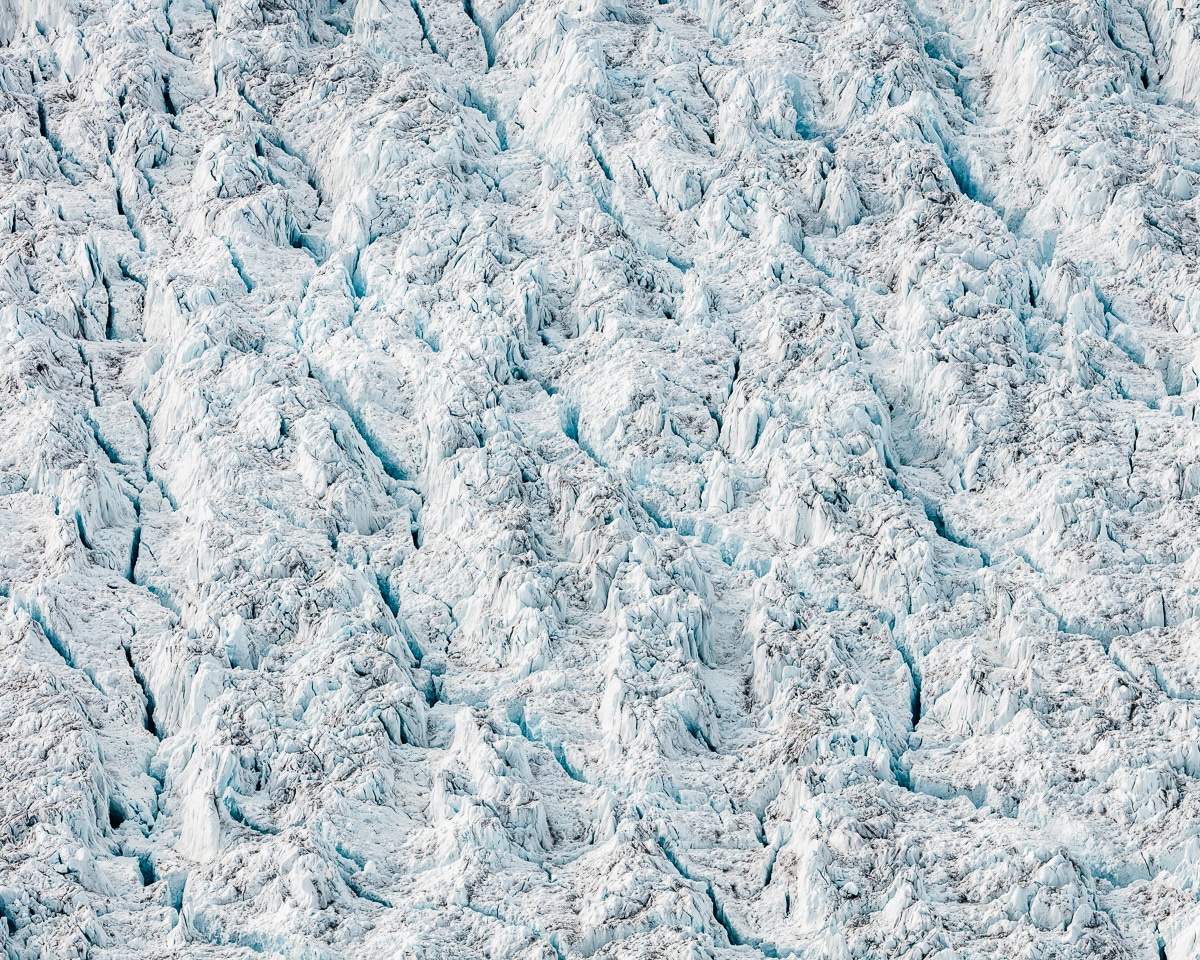 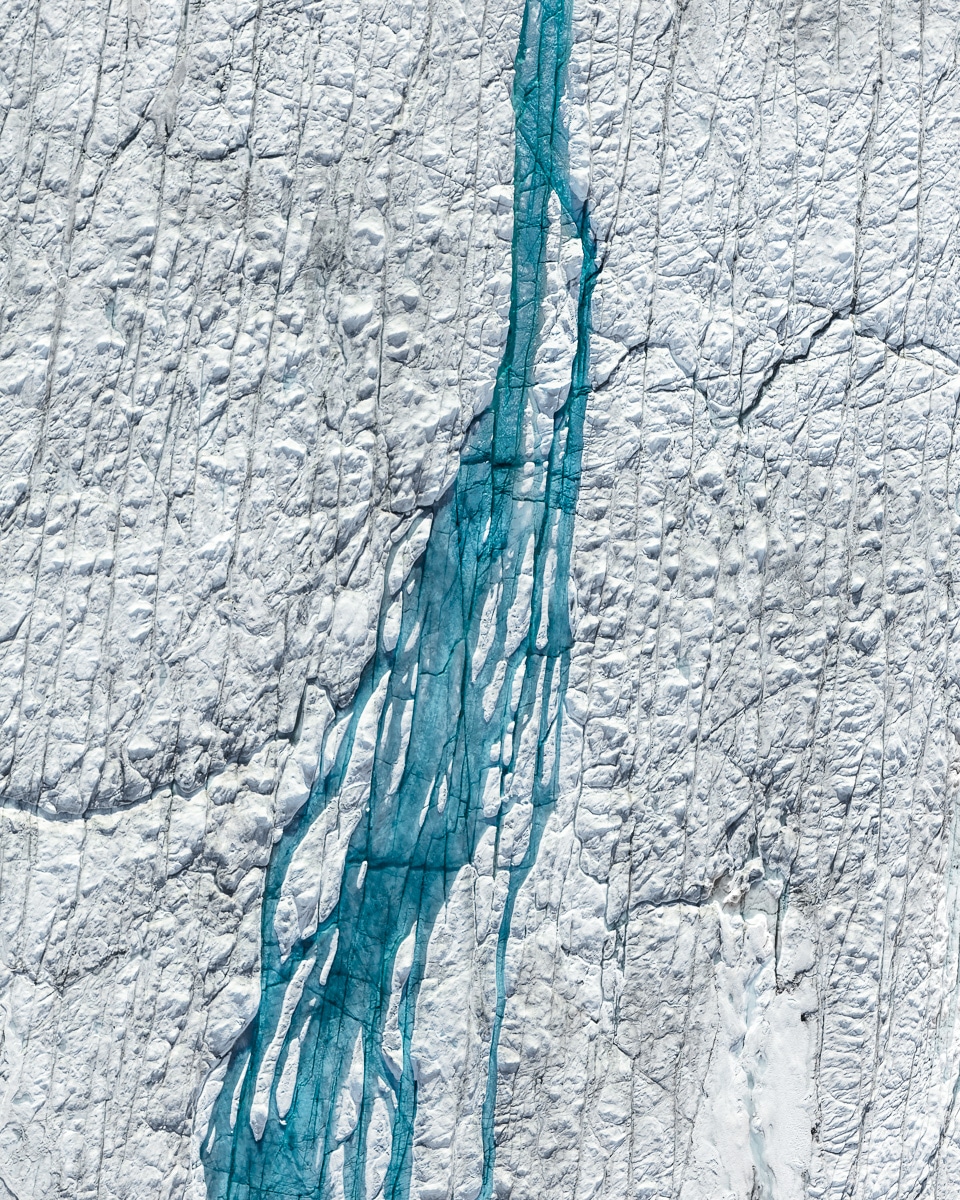 When you arrived, were the environmental conditions what you expected?

For this project, I did several flights over the Greenland Ice Sheet. To understand the dimensions, it covers an area seven times the size of the United Kingdom and is in parts more than 3,000 meters [9,800 feet] thick. The melting on the ice sheet happens during the summer months between June and September. I spent two weeks in the Arctic, mainly staying in a tent. I was surprised by the mild conditions they have well above the northern polar circle.

When flying over the Ice Sheet, you would expect a massive chunk of ice. For sure, it is like that but its surface is more like Swiss cheese, covered with thousands of seasonal rivers and lakes on the surface through which meltwater is able to flow over the ice, enter into the ice, and then downstream into the ocean. Also during the summer months, when no fresh snow is added to the Ice Sheet, it looks quite dirty with a lot of dust and ash on it, making the structure even more visible. 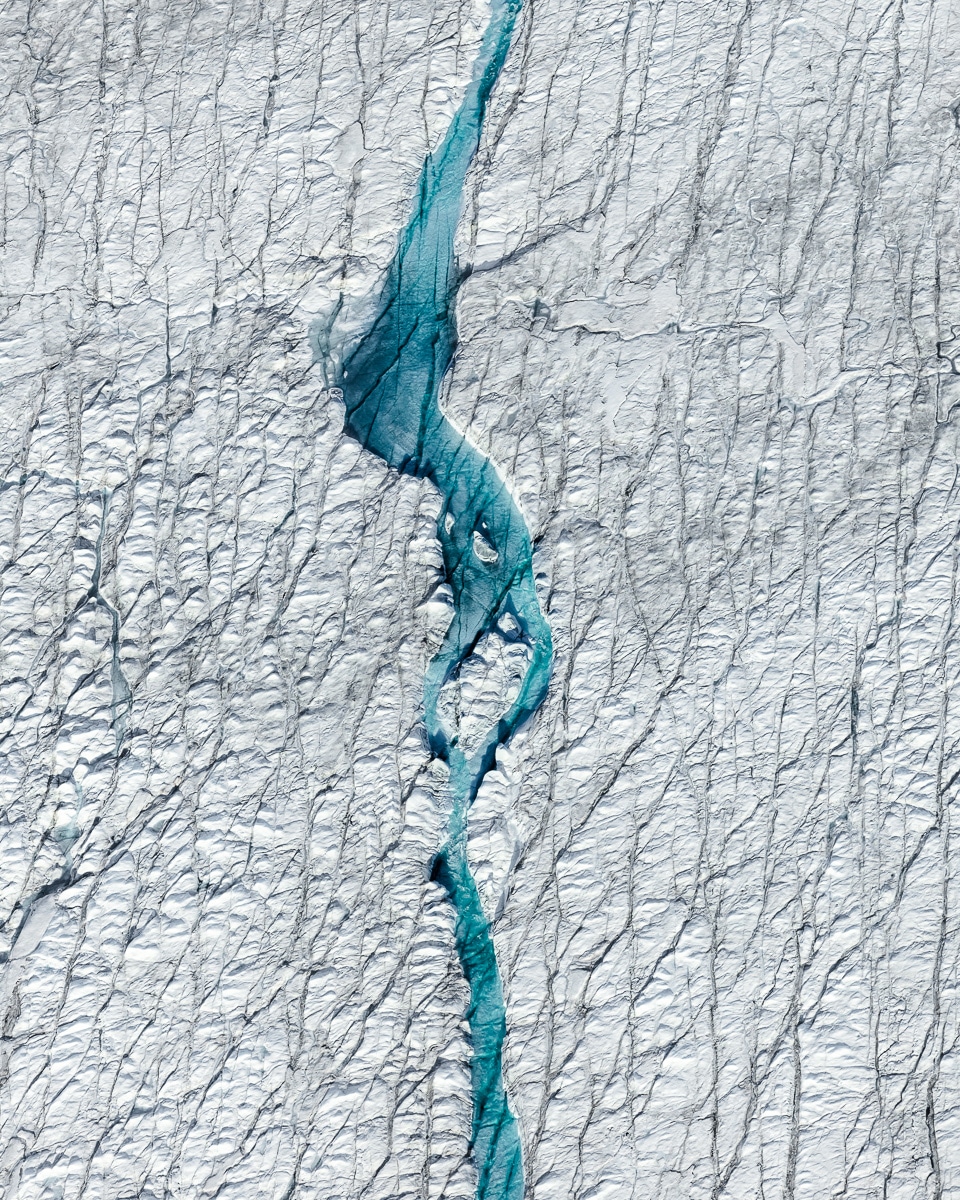 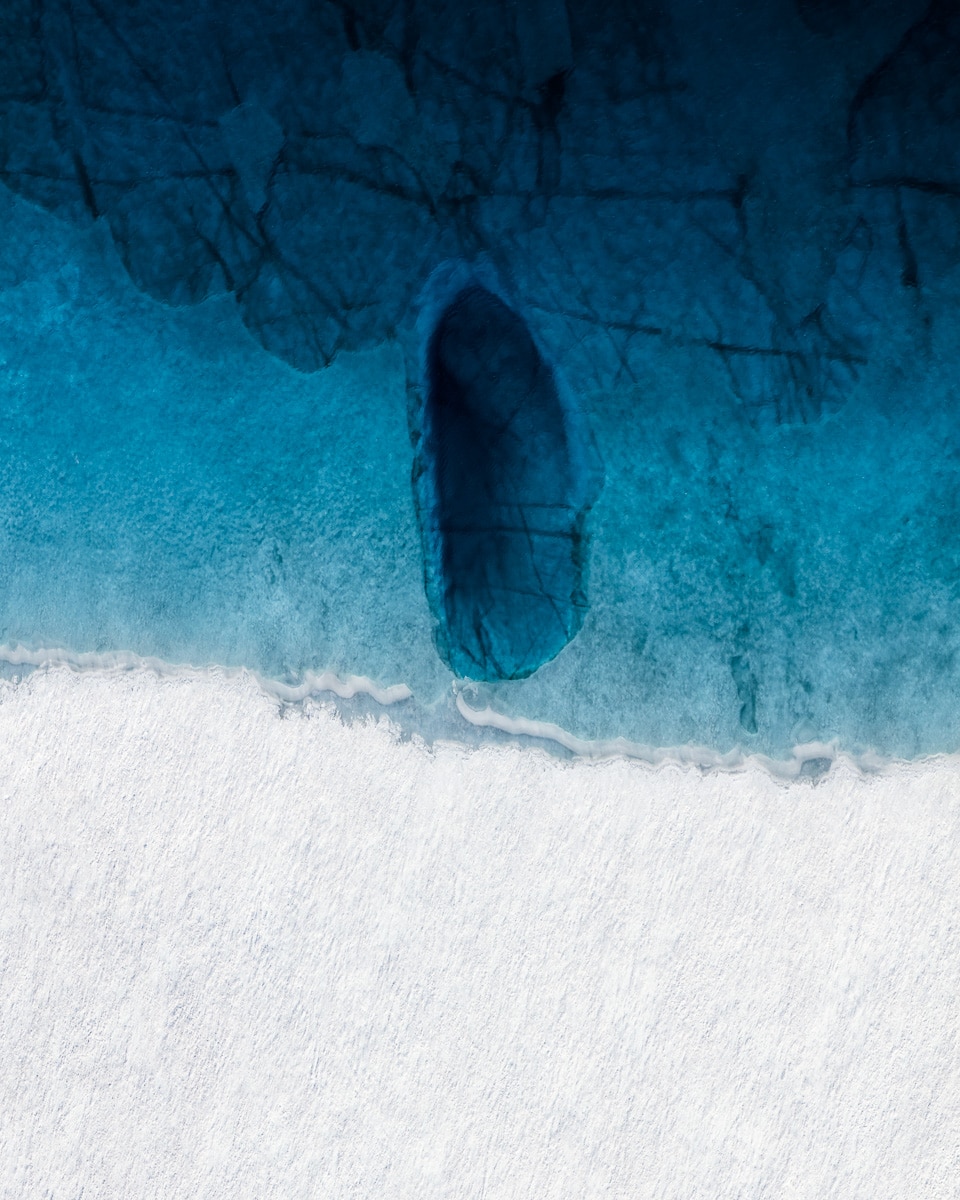 The UN recently issued a climate change report that the Paris Agreement’s pledge to keep things within 2°C actually isn’t good enough. What are your thoughts based on your observations?

Absolutely! The lower we can hold this number, the better it would be for our environment and for our next generations. The only thing is, average surface temperatures across the globe have already risen to one degrees Celsius since the pre-industrial time in 1880, halfway to the threshold.

Unfortunately, time is running and even if we would achieve zero emission tomorrow, temperatures would rise due to the long-term effects of CO2 emissions. Some climate models predict that global temperatures will rise up to 4.5 degrees Celsius by 2100. So every decimal counts, and it is on us to understand the complex effects of our impact on the earth. The Paris Climate Agreement actually says “keeping global average temperature WELL BELOW two degrees Celsius.” 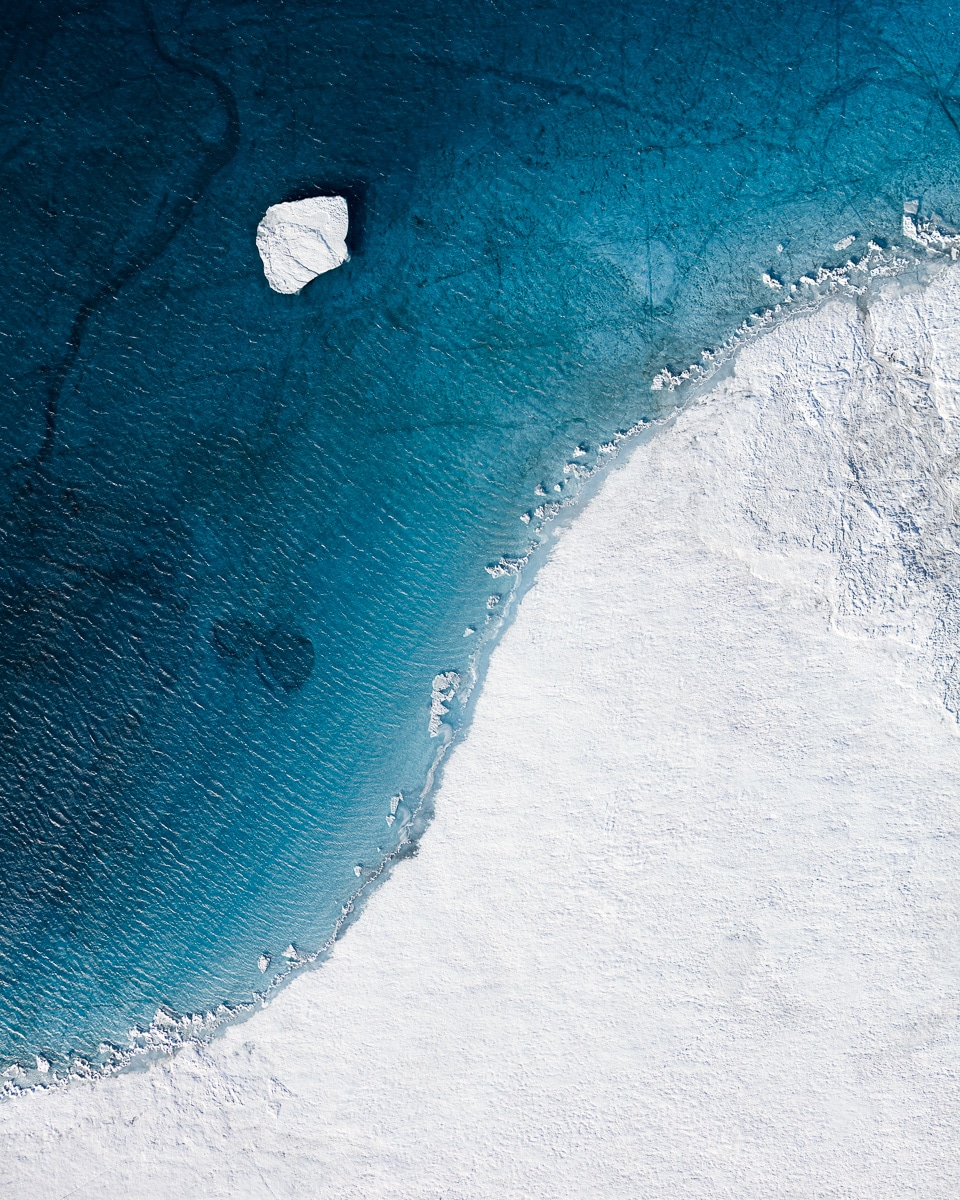 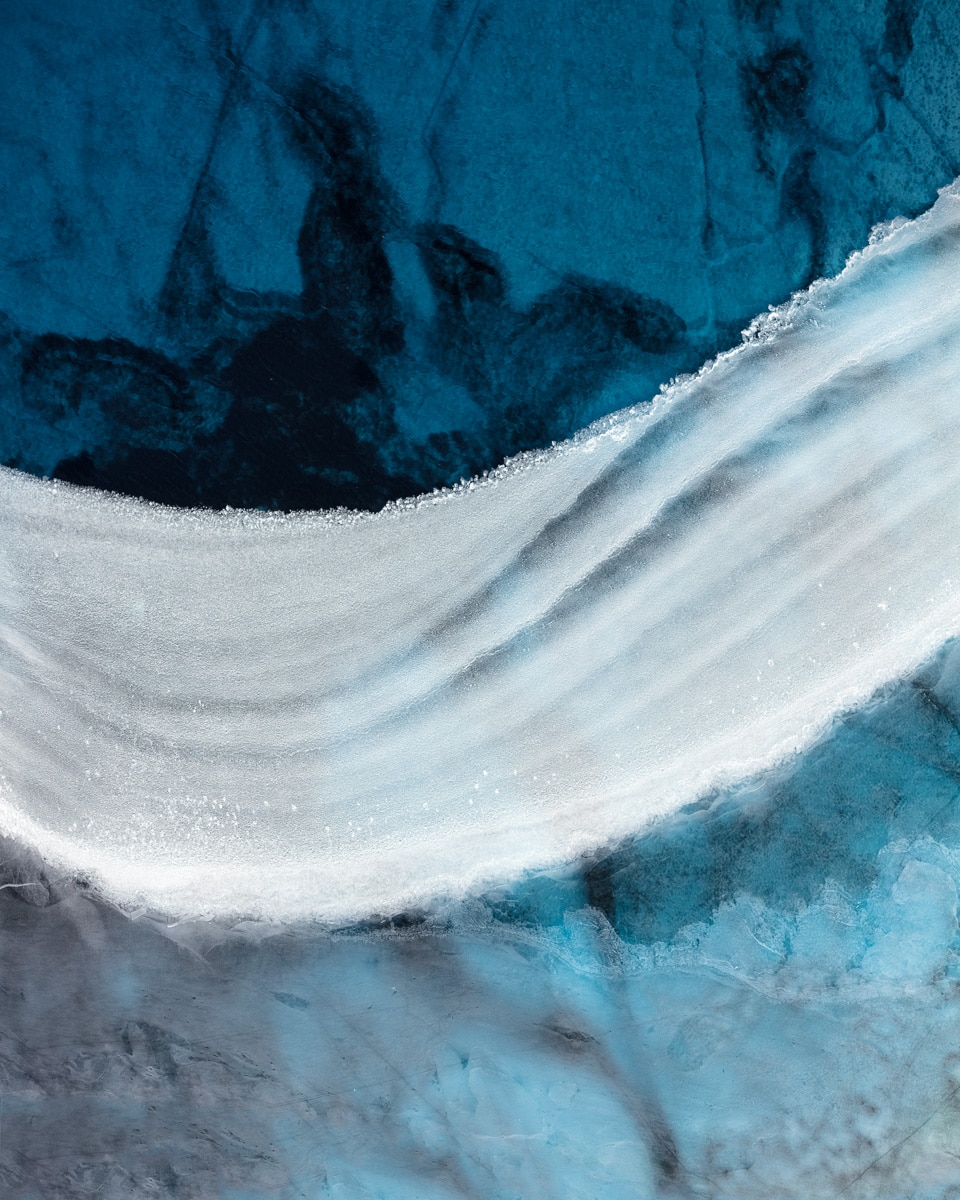 Why do you feel it’s important, as an artist, to use your work to bring light to these environmental issues?

We need to show the problems that affect our planet in a way that nobody can deny. A picture is a sort of proof of concept and cannot be ignored. I think it’s important to use your tools to inspire people and to hopefully make a little difference in the world. 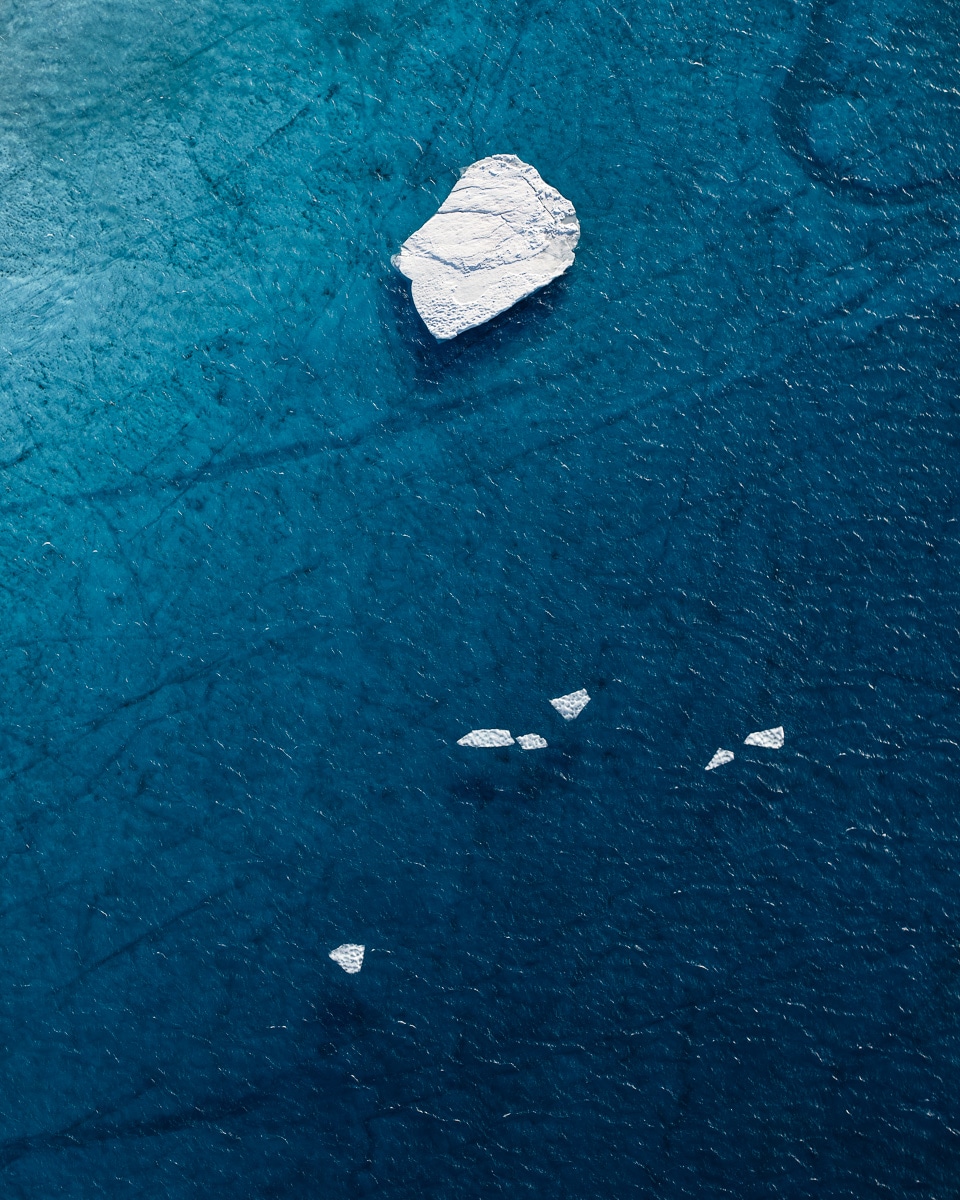 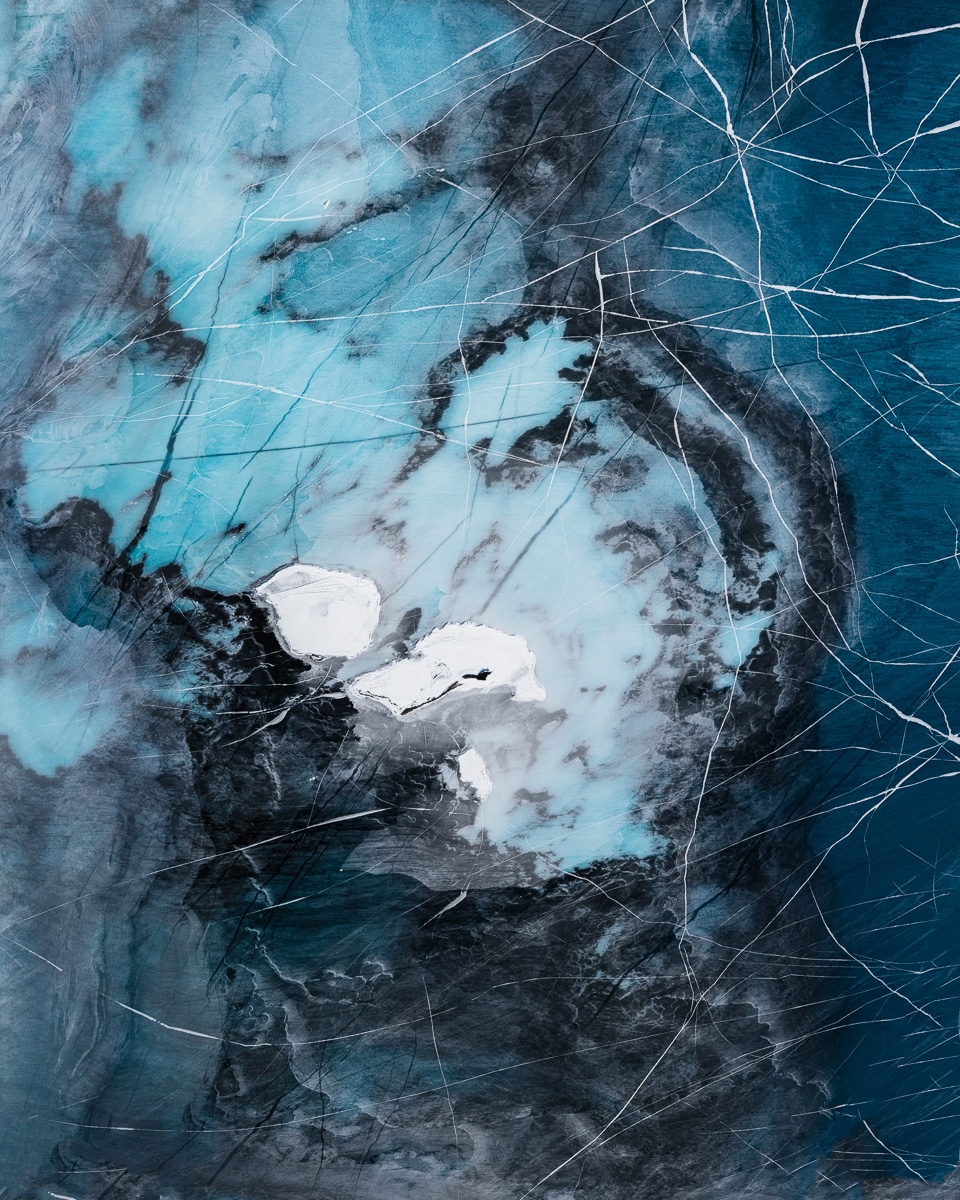 What do you think the biggest misconception most people have about global warming is?

It is the existential threat of the problem itself. It’s a kind of paradox but global warming is such a complex issue, that it is too big to realize it. We lack the imagination about what a world in 200 years would look like. 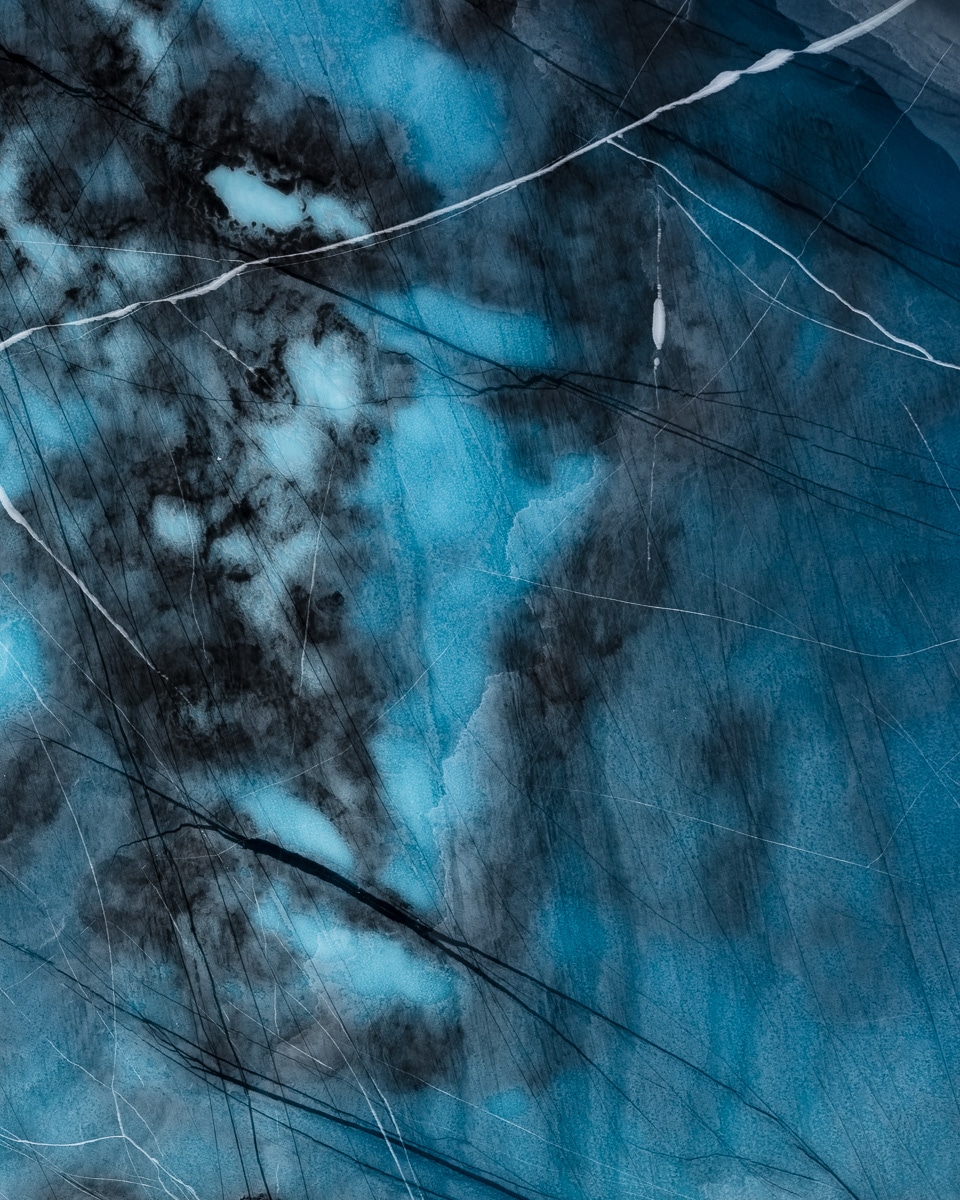 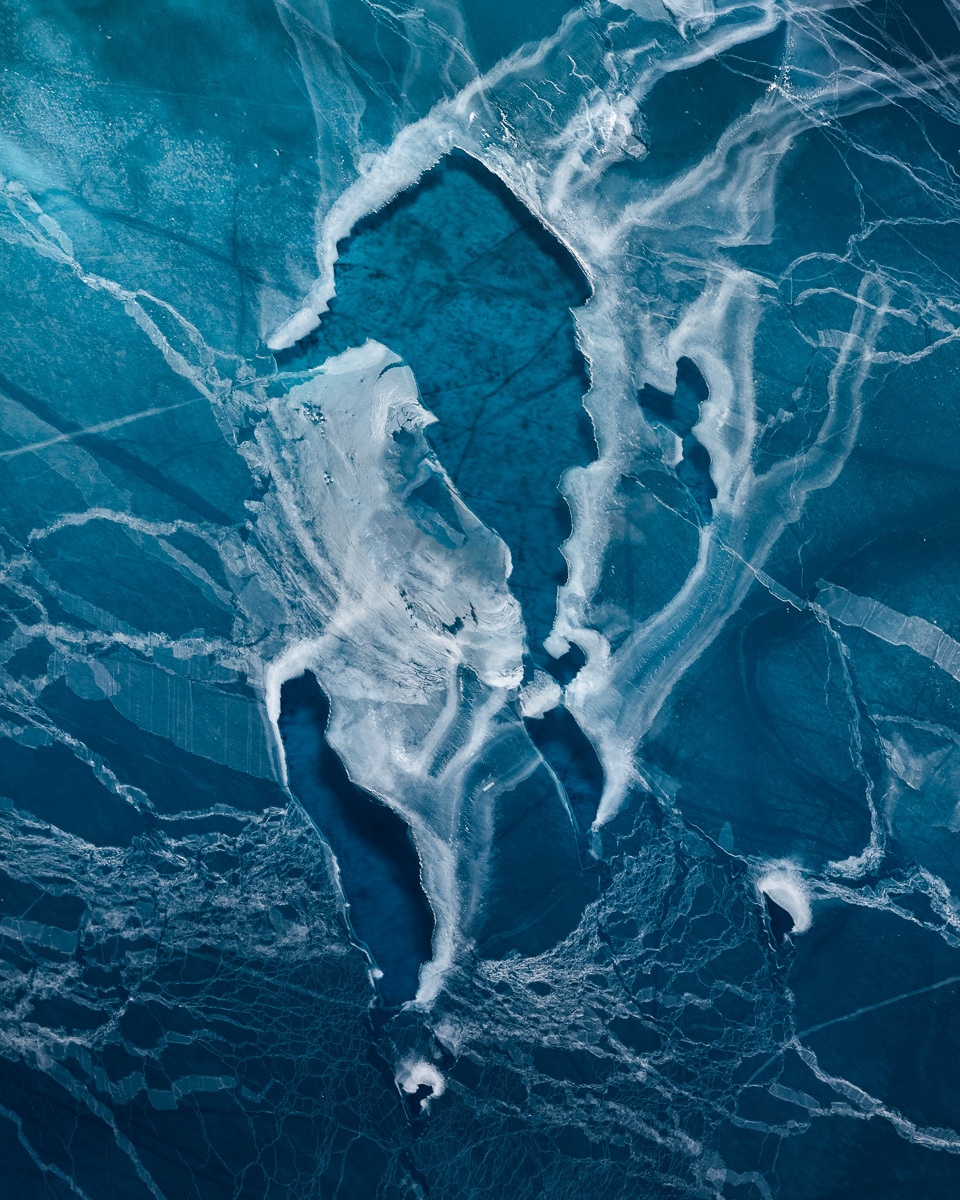 What do you hope the public takes away from the work?

Climate change is not a game of numbers scientists play because they are bored. It might be a slow process in our understanding of time, but it is happening right in front of our eyes.

I keep focusing on the relationship between man and nature. Recently, I found another very important topic to talk about and will hopefully do a project about this next year.

My Modern Met granted permission to use photos by Tom Hegen.

Breathtaking Beauty of Glaciers Illuminated by LED Drones at Night