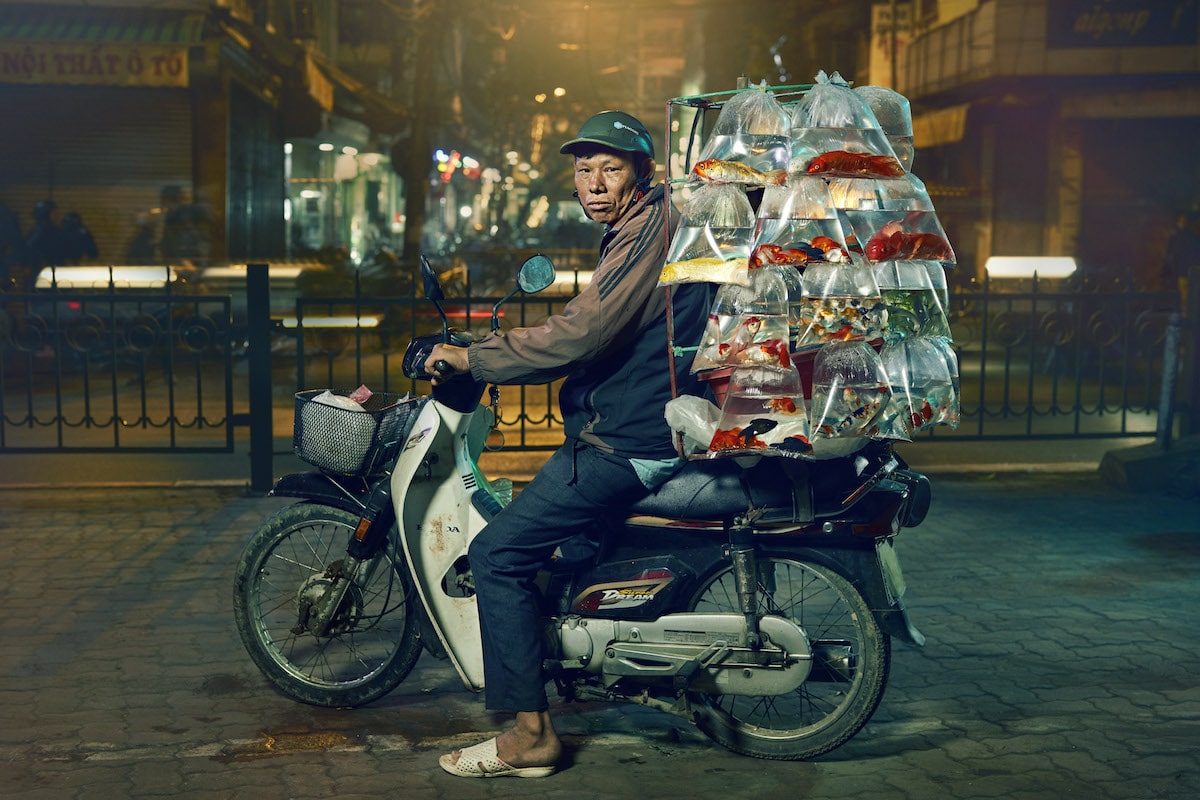 If you’ve ever been to Southeast Asia, you know that motorcycles (or scooters) are the transport of choice for many locals. In dense cities such as Hanoi, the narrow streets are usually clogged with them, and there’s always the low hum of engines in the air. The 2-wheelers are perfect for zipping around from one spot to the next, but they’re also surprisingly useful for transporting cargo.

Intrigued by the scooter culture in Hanoi, London-based photographer Jon Enoch captures the vast and unusual motorbike loads across the Vietnamese city. “When I first traveled around Southeast Asia, 15 years ago, the number of motorbikes and mopeds just astounded me,” says Enoch. “Initially, that level of traffic that never stops is overwhelming to the senses—you wonder how you’ll ever manage to cross a road. I began to be fascinated by the drivers and deliveries.”

Enoch describes Hanoi’s motorbikes as the “workhorse of the city” and his photos are testament to that. From mountains of ice bags to stacks of precariously balanced eggs in boxes, the talented photographer’s photos reveal just how savvy the locals can be with the little space their scooters provide. In one image, a man transports multiple bags of live fish, and in another a vendor carries a mass of children’s toy footballs.

Hanoi has a population of 7.6 million, and the amount of scooters almost matches that at around 5 million. Since almost every person in the city owns one, there are serious air pollution problems. It’s so bad in fact, that in 2017 the government announced that they would ban motorbikes and scooters by 2030 to ease congestion. Although this is good news for the environment, the upcoming law is bound to have an effect on the many locals whose livelihoods’ depends on scooters.

We recently caught up with Enoch to ask about his experience capturing the motorbike drivers of Hanoi. Read on for My Modern Met’s exclusive interview. 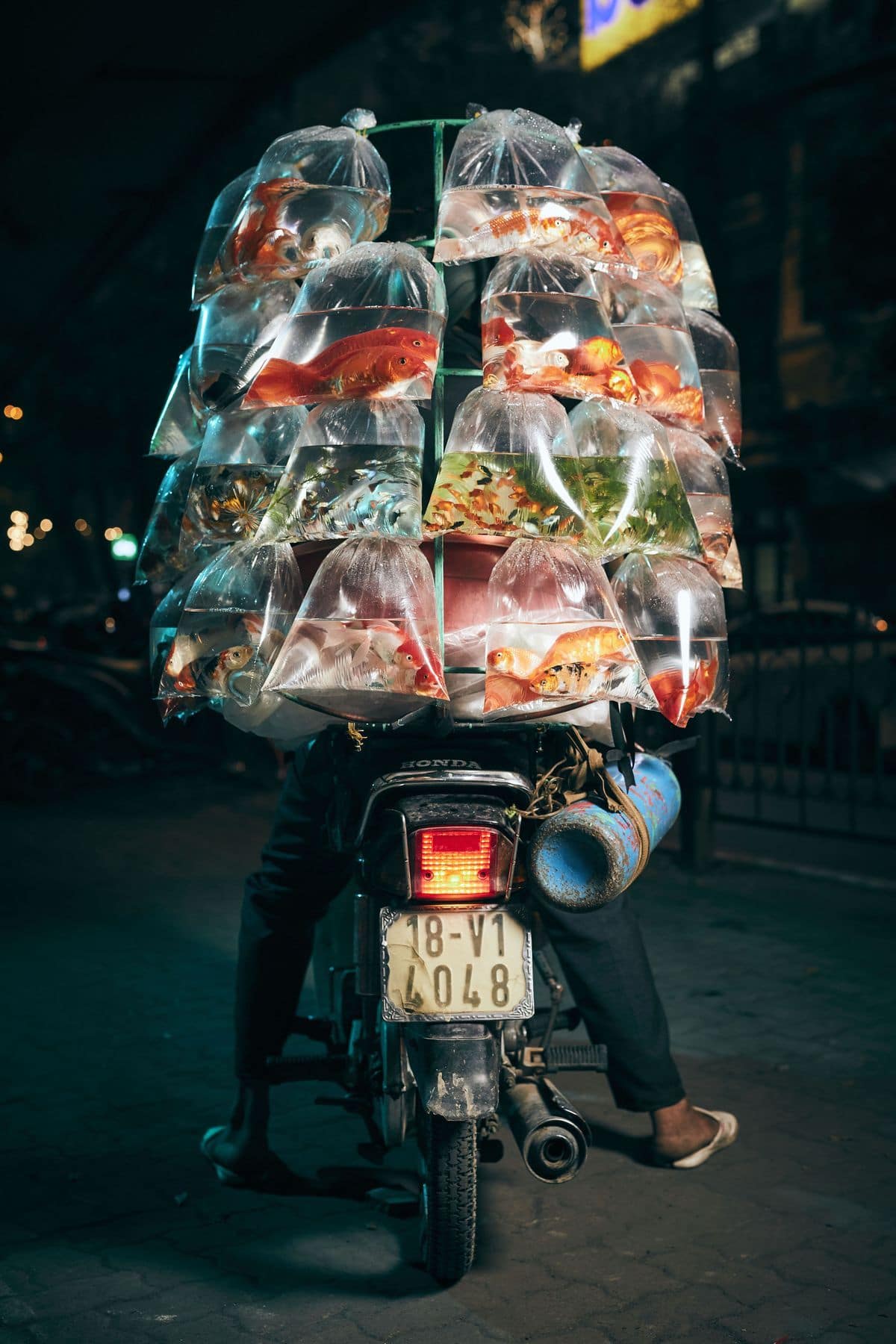 Can you describe your first visit to Hanoi?

My first visit to Hanoi was actually to shoot this project although I have travelled around Southeast Asia pretty extensively beforehand. It was an odd visit as we were doing night shoots so we would sleep for the large part of the day and pretty much stayed on London time. It was a very nocturnal visit! 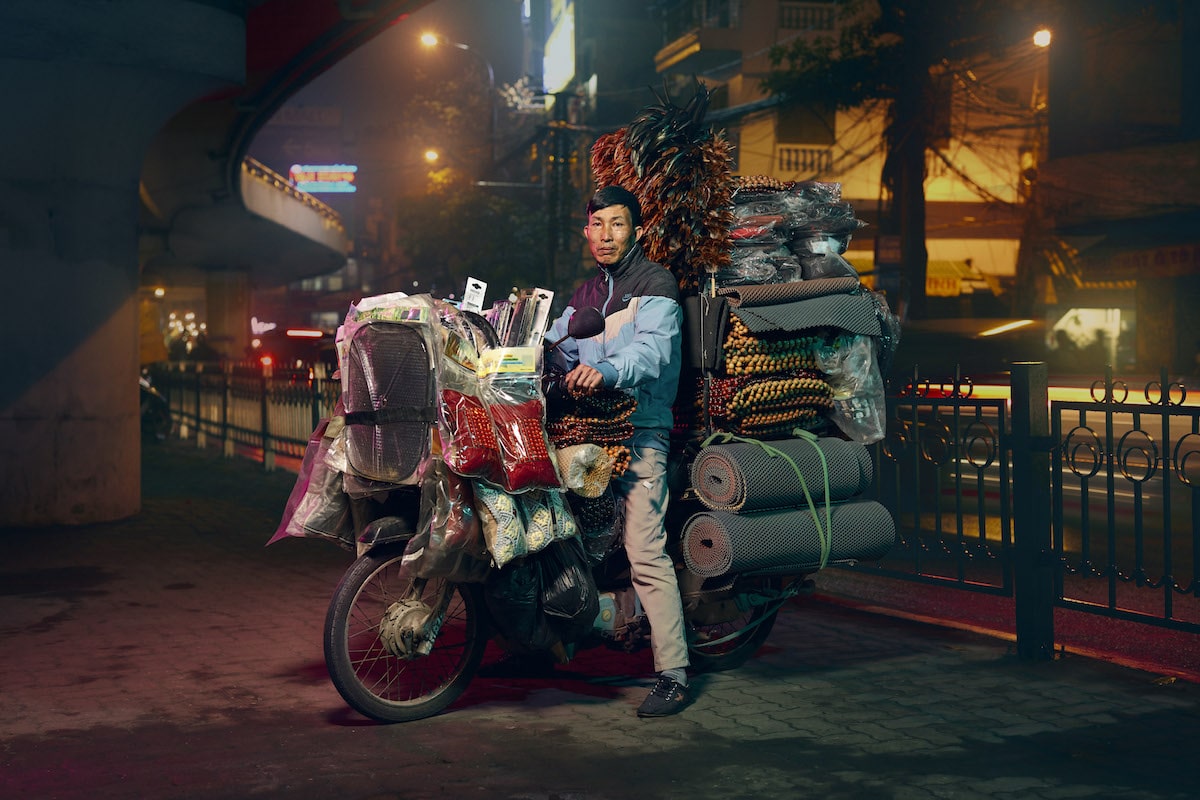 How do the locals usually react when you ask to take their photo?

With bemusement mostly. They are obviously used to seeing bikes like this on a daily basis so the subjects were a bit baffled as to why we were interested and passersby are quite used to tourists and cameras so we were pretty much left alone.

What’s the strangest thing you’ve seen packed onto a scooter?

I don’t think there is any end to how strange it can get. One of the funny things about the project is that we would be set up about to shoot someone—and then someone else would ride past with an even odder load. You can always take strange to the next level. There were a few things I saw that got away. The weight on the ice bike was unbelievable—I have no idea how he managed to ride it. 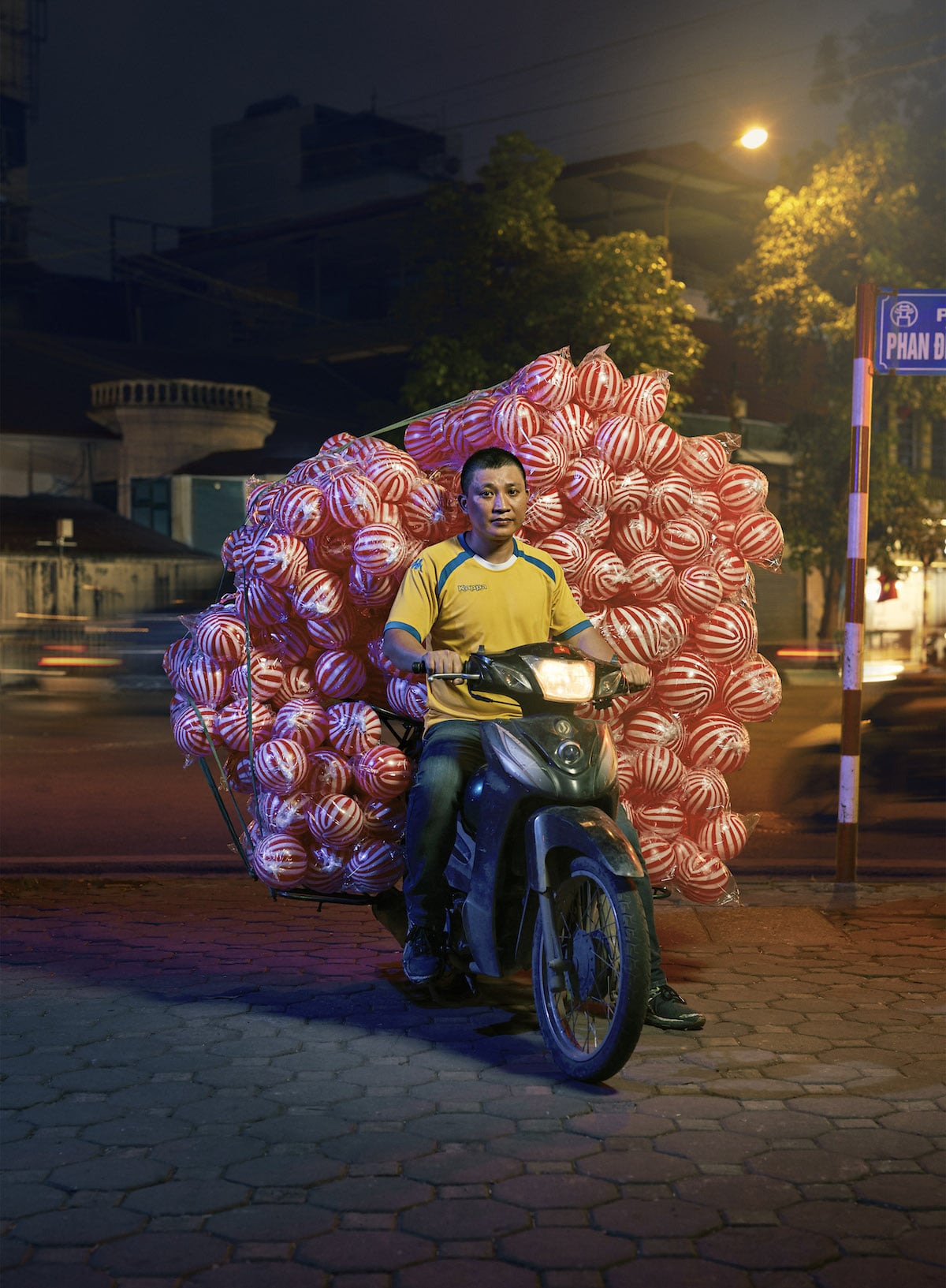 It has been announced that motorbikes will be banned in the city by 2030 in an attempt to combat pollution and traffic jams. How to you think this will affect the local way of life?

You can certainly see a change coming. Cars and mini vans are getting more popular and more common on the streets. Don’t get me wrong, the bike is still the undisputed king but for the transportation of goods at least change is certainly occurring.

Is there a reason you chose to shoot this series at night?

Partly out of practicality—Hanoi is a very busy place. And the more interesting locations like the old city are incredibly tight in terms of space. So it was partly to allow us to be able to work around the subjects safely. Partly it was because this is when the delivery guys are actually out delivering—much like in the west, stores refill overnight and in the early hours. It was also because I wanted some control over the light. Shooting in the middle of the day with the harsh sunlight would have been problematic and I thought there would be a beauty to using the mixed light of the night. 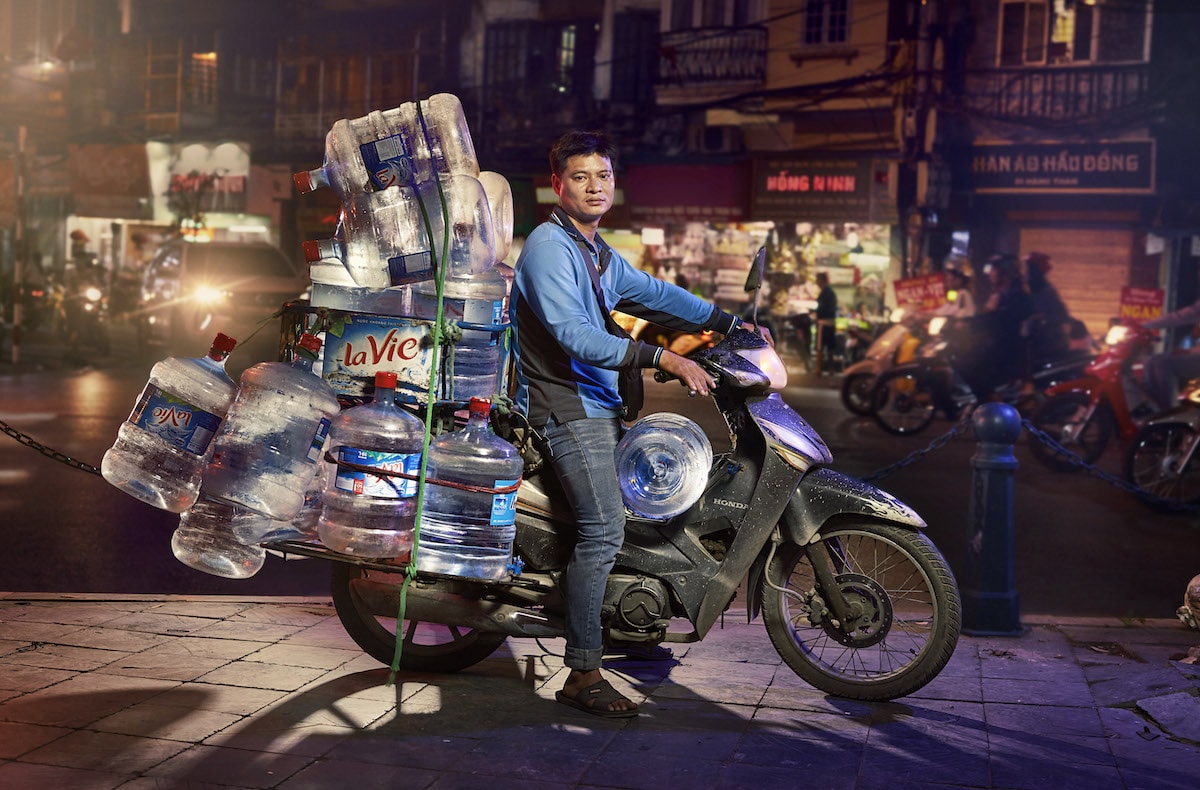 Do you have any tips for someone who wants to take up street photography?

The simplest and best piece of advice is probably “if you don’t ask you don’t get.” If you see someone and you want to pose them up and take their picture, you have to go for it. What’s the worst that can happen?

Do you have other exciting projects coming up?

My commercial practice working in the advertising and lifestyle field keeps me busy but I try to shoot a few personal works like this at least a couple of times a year. I have a few ideas that are swirling around; it’s an interesting time when you are deciding what to do next. 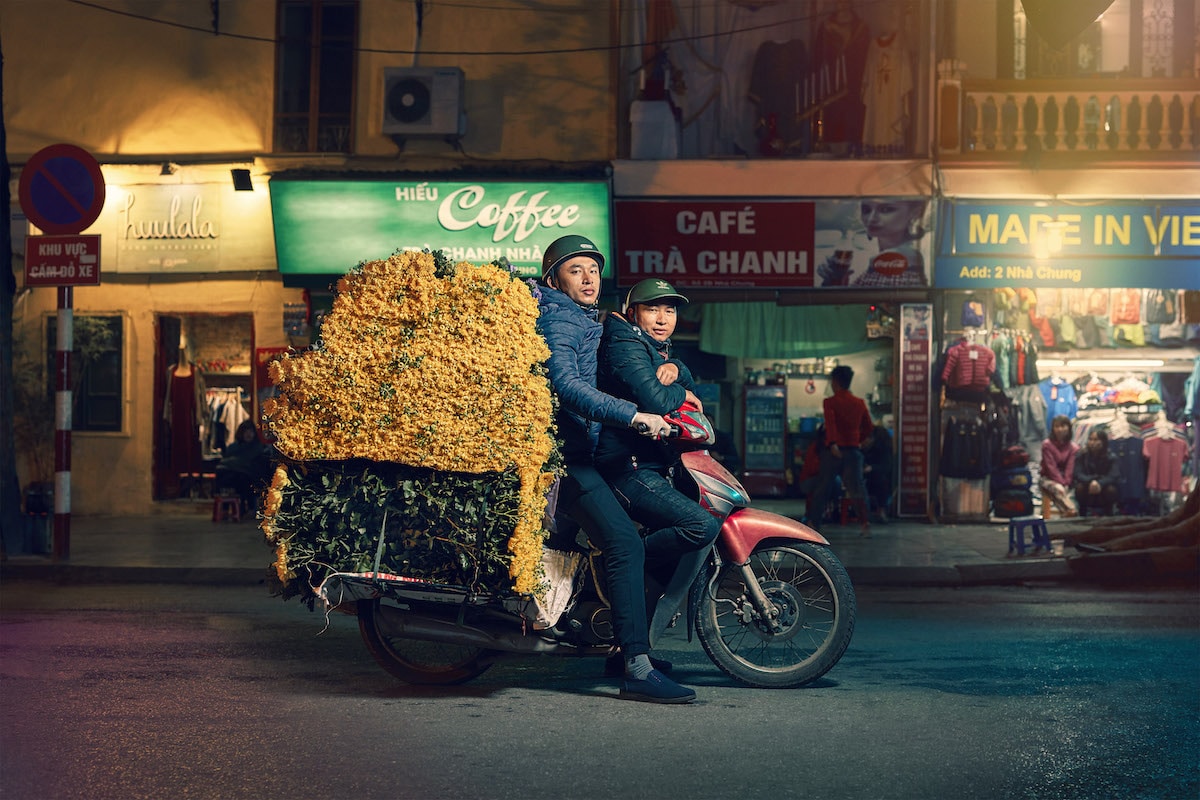 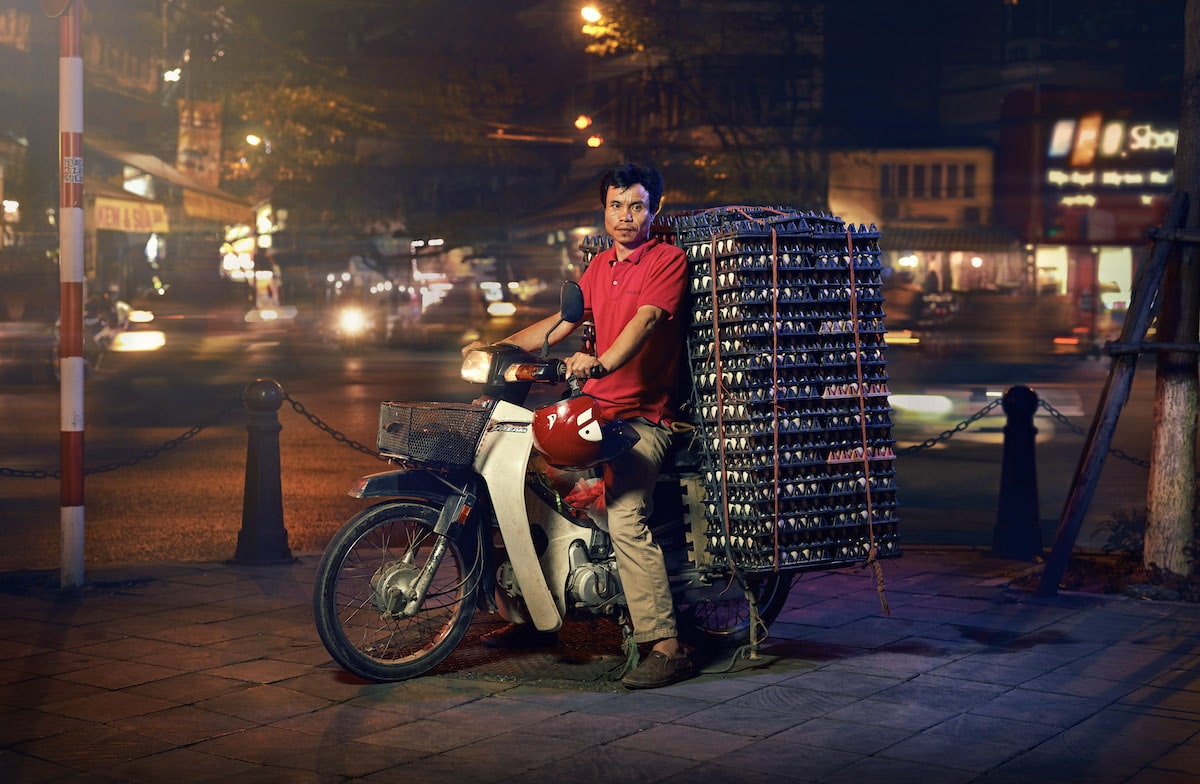 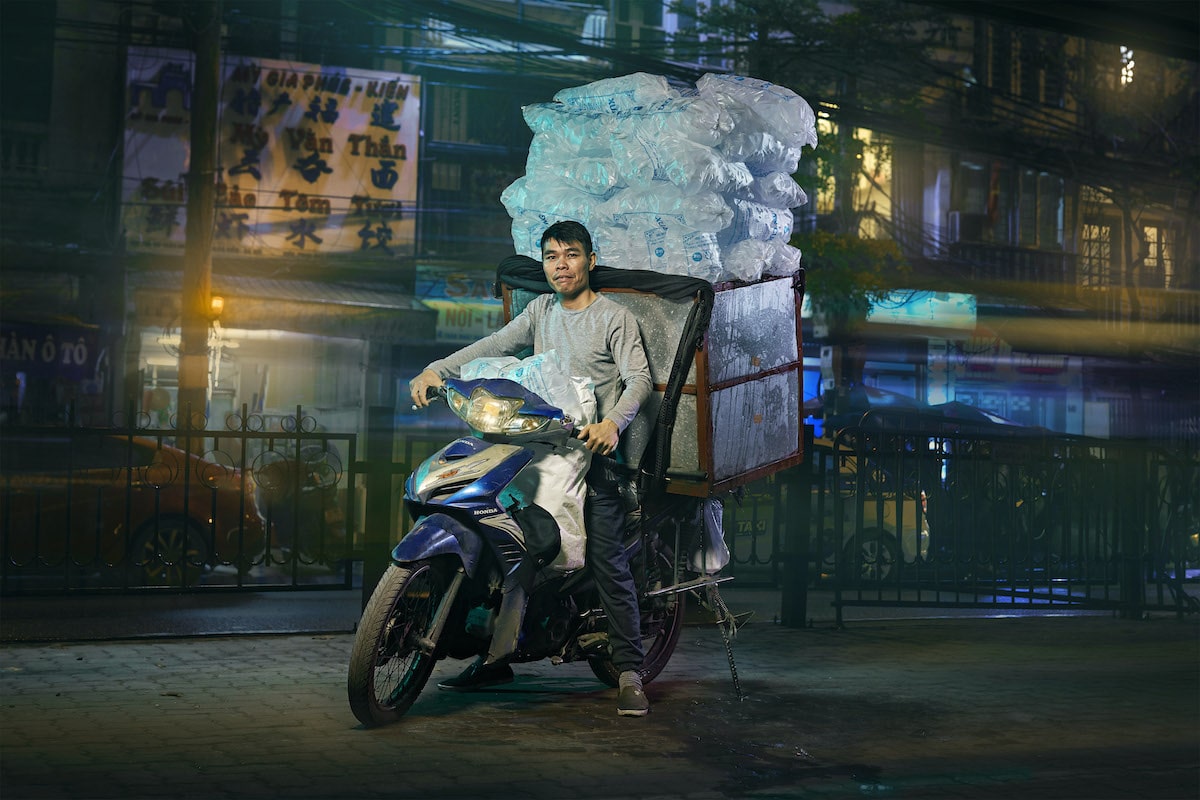 Remarkable Photos of One Man’s Journey Across Northern Vietnam

The post Interview: Street Portraits of the Incredible Cargo People Carry on Motorbikes in Hanoi appeared first on My Modern Met.