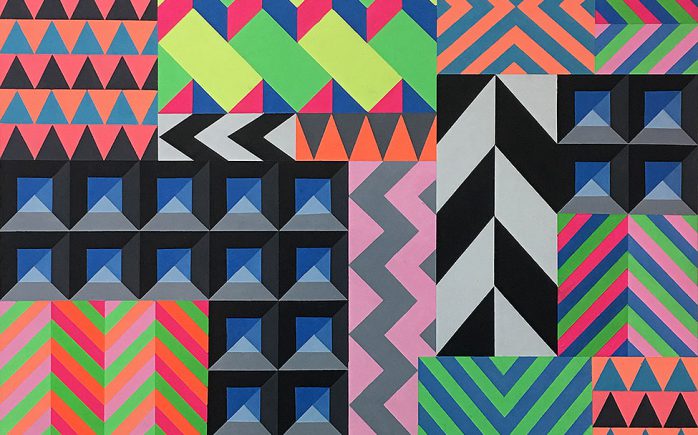 Art historian Hector Campbell recently sat down with British artist and gallerist Carl Cashman to discuss the creation of his distinctive artistic style, his early artistic influences, love of collecting, and the frustrations he felt as an artist which led to the founding of Semi Skimmed Gallery, whose second group exhibition opens at BSMT Space in Dalston, London on September 6th, and runs until Sept 12th.

Hector Campbell (HC): You’ve become renowned for your geometric optical art, particularly since you coined the word ‘Neometry’ in reference to your use of neon paint. How long have you been developing this style? And, when did you first decide to experiment with op-art?

Carl Cashman (CC): I’ve been a fan of op-art since back at school when, aged 12/13, our art teacher had us working on a project based on the work of MC Escher. As I had always been half decent at math too, it felt like a fun way of making art. Back then though, the only art we ever really saw in person was at the Tate or the National Gallery during school trips. At that stage, becoming an artist wasn’t something I ever thought I could do, I presumed you had to be super-rich, and that the massive museums were the only place to show your work.

More recently I regained my interest in geometry after starting to collect art. Being unable to afford a Barry Mcgee painting, I decided to make my own and called them ‘Mgmee’…I know, clever, eh? I continued painting, my style evolved and I was invited to exhibit at Breeze Block Gallery in Portland by Sven Davis, who was their curator at the time. Before I knew it, I had a sold-out solo exhibition there, and even had the CEO of Nike, Mark Parker, purchasing a chunk of the show. It all happened really quickly and looking back now, I definitely took it all for granted. I never really appreciated that that wasn’t how every show will go unless you really do put the effort in.

HC: After training in Fine Art at university, you began painting on the streets as an output for your creativity. What was it that attracted you to street art/graffiti?

CC: I’d always loved seeing graffiti as a kid, my dad and I used to go to watch Charlton Athletic play, and on the train up would see loads of tags by people like FUME and TOX. After a friend’s brother moved back from London, he properly introduced us all to graffiti, and like most kids that doodle on things, we created our own aliases.

A few years later, during college trips to the Tate Modern, we would see some of the earliest Banksy works such as the Bankside collaboration with Ben Eine. That was my first introduction to street art, it had humour and felt more like the comics we read as kids, more accessible. I made my first stencilled artworks in the early 00’s but never sold any. 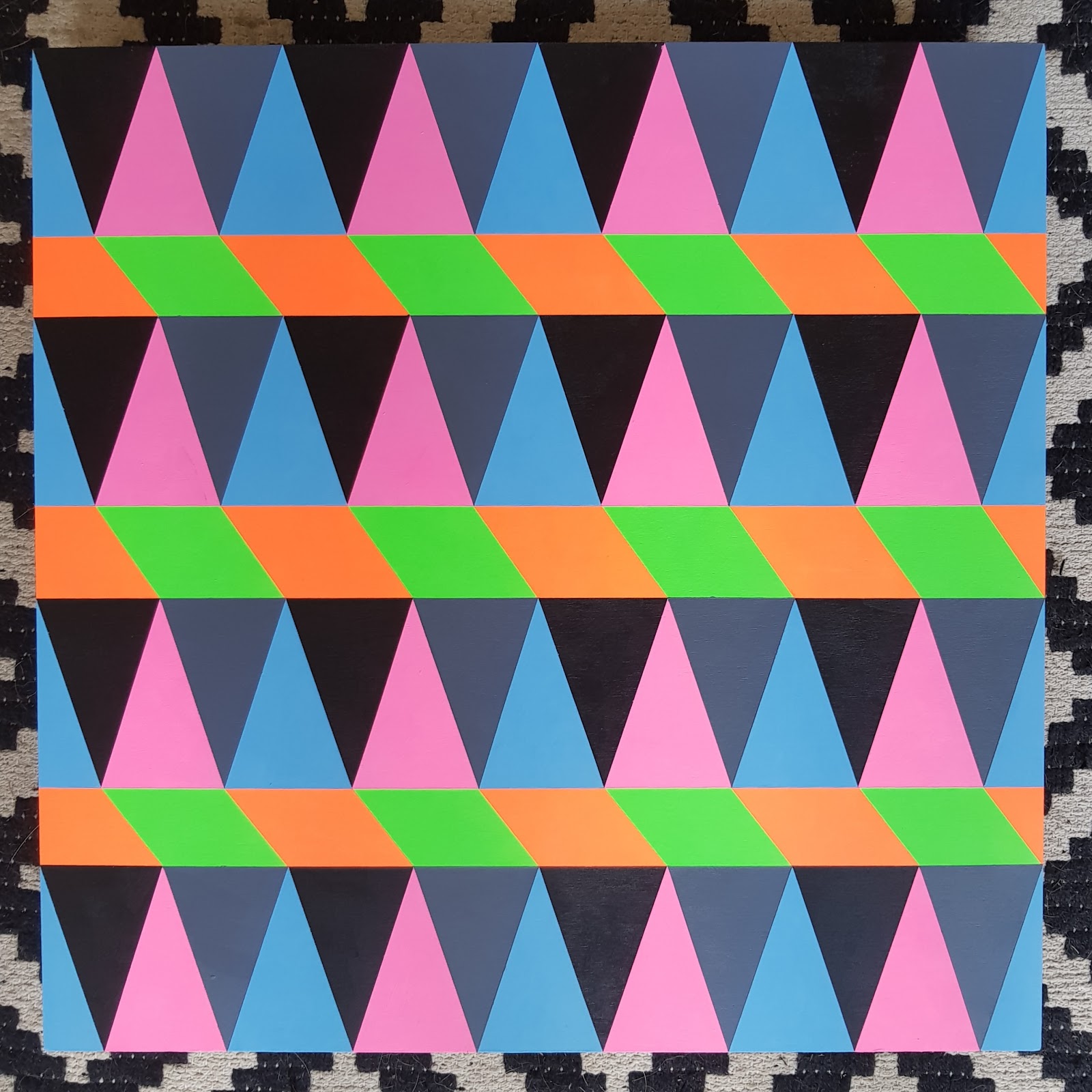 HC: You have cited M.C. Escher and Bridget Riley as influences, as well as pioneering urban artists such as Barry McGee and Steve ‘ESPO’ Powers. Do you maintain an interest in art history as well as contemporary art? Are you an art collector yourself?

CC: I love to travel and get a lot of inspiration from architecture. I managed to go to Palestine three times this year and discovered lots of beautiful mosaics, lots of traditional tiled patterns in buildings such as the Church of the Nativity and Hisham’s Palace, an Islamic archaeological site near Jericho which dates back to the 8th century. Moorish design is also one of my main sources of inspiration.

I’m a huge fan of having other people’s work on the walls and first began collecting art while at university, in the early Pictures On Walls days when you could pay £175 for a Banksy print.
Over the years lots of works have come and gone due to living costs and travelling, but I still try to maintain a strong collection. Amongst others, we have works by KAWS, Grayson Perry, Paul Insect, Lucy Sparrow, Stanley Donwood and my pride and joy, a Barry Mcgee drawing.

HC: You’ve talked before about your love of draughtsmanship, often eschewing the use of computers and technology. Is that still something you believe in? And how does that affect and impact your work?

CC: It’s still primarily how I work, although I do sometimes wonder if that hinders my development. My logic has always been that if I’m on a plane that crashed on a desert island, I still want to be able to make my work in the same way, although I’m not sure how many rolls of masking tape I’d be able to gather from the island. 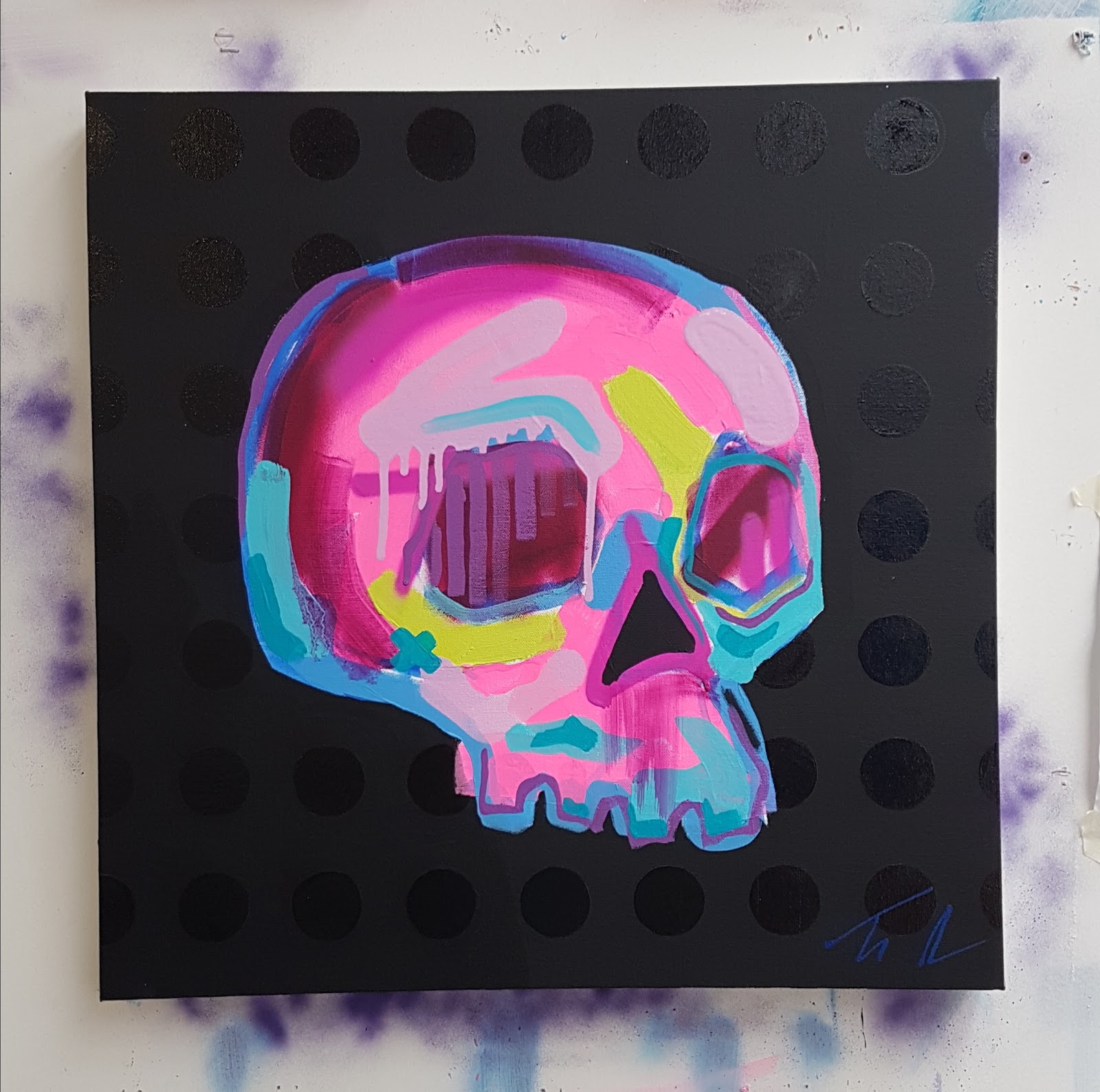 HC: After success curating the art for Gottwood Festival, as well as a group exhibition ‘The Acid House’ in October of 2017, you set-up Semi Skimmed Gallery earlier this year. How did you become interested in curation, and then setting up your own gallery?

CC: Like many artists, I often had the experience, especially at festivals, of feeling like the decor is an afterthought. A festival may advertise itself as including ‘live painting’ or ‘street art’, but more often than not you have to pay your own way, arriving and having to join the queue for a ladder, or wait three days for lighting enabling you to work at night. Gottwood offered a great platform to artists, treating everyone the same. Therefore, we were able to offer artists a decent rate, with travel, materials and food all provided for. When you add to that the fact it’s located in a beautiful part of the UK, we had a chance to get some great artists involved.

Setting up Semi Skimmed felt like a natural progression from that. One benefit of spending many summers in fields painting for free is that you get to meet artists that you would never have normally crossed paths with, idols that I would never have dreamed of hanging their work on my walls, let alone becoming friends with and being able to offer help and advice going forward.

HC: Semi Skimmed Gallery, which had its debut group exhibition at Jealous Gallery in April, aims to provide a better experience for exhibiting artists. Can you explain more about your gallery model?

CC: I was sick and tired of being contacted by galleries that want to charge a fee to have your jpeg looked at, spaces you’ve never heard of that want half of a sale for listing your images on their online shop, often not even to have your work displayed in a physical space.

The idea behind our gallery is that, as you say, we aim to make the exhibiting experience better and easier for the artists involved. The name Semi Skimmed comes from the idea of ‘skimming’ off less of the profit. With us, an artist will keep 60% of sales made during the exhibitions physical run, which then increases to 70% of sales made a month or more after the show. Therefore, it’s in our interest to promote the artists involved and push for sales, we don’t want to use any artist’s work as filler for an online store. 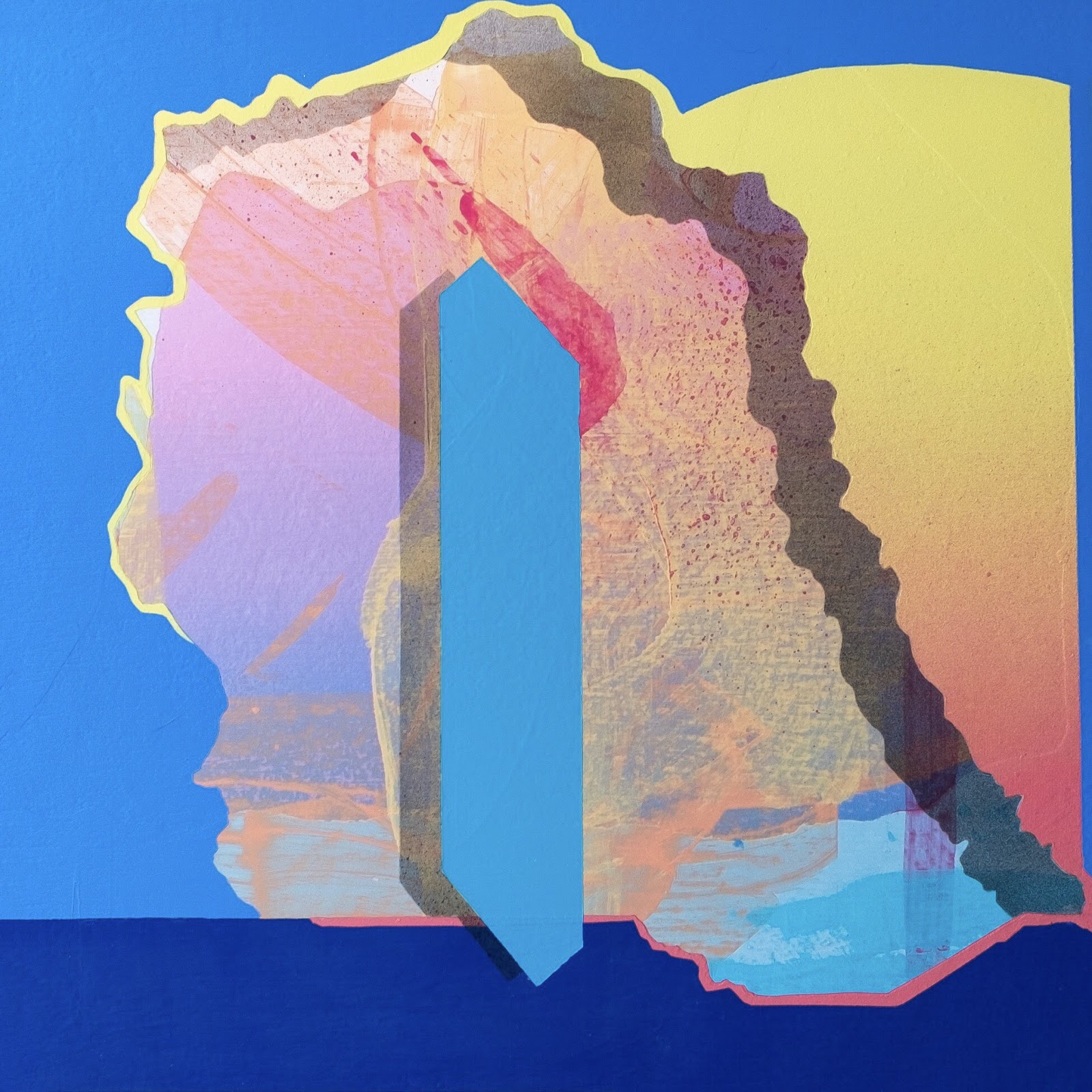 HC: For the next Semi Skimmed exhibition, at BSMT Space between the 6th and 12th of September, you have gathered an international roster of contemporary artists, could you talk us through some of the exhibiting artists?

CC: I’m always blown away when artists agree to exhibit with us, bearing in mind I started this journey as a fan for most of these people, and I do sometimes struggle with meeting my idols. For this next show, we have a great list of artists and once again a wide variety of styles. I don’t want to become the gallery that only shows ‘X’ style of work, it’s not how we ourselves collect art, so I guess that’s reflected in the artists we work with.

To name but a few we have Benjamin Murphy, who makes painstakingly intricate artworks built up with thousands of tiny pieces of electrical tape. He’ll regularly spend a week cutting and placing mm sized pieces to create the texture of bedding or curtains in the background of a piece.

Tim Fowler is an artist I first met through working at Shangri La, Glastonbury. His distinctive colour palette has become a trademark of sorts and his popularity is ever increasing, it’s great to have him involved at this relatively early stage.

Rachel Strum’s abstract style first caught my eye a couple of years ago. I wanted a piece for my personal collection long before Semi Skimmed started, so it’s an honour to both introduce her to UK collectors and have her participate in our shows.

Finally, we have Super Future Kid, whose work I often say is ‘The Cabbage Patch Kids on acid.’ I’m not sure what else to add to that but it’s great to have her on board for this show and more of the events we have planned for the future. 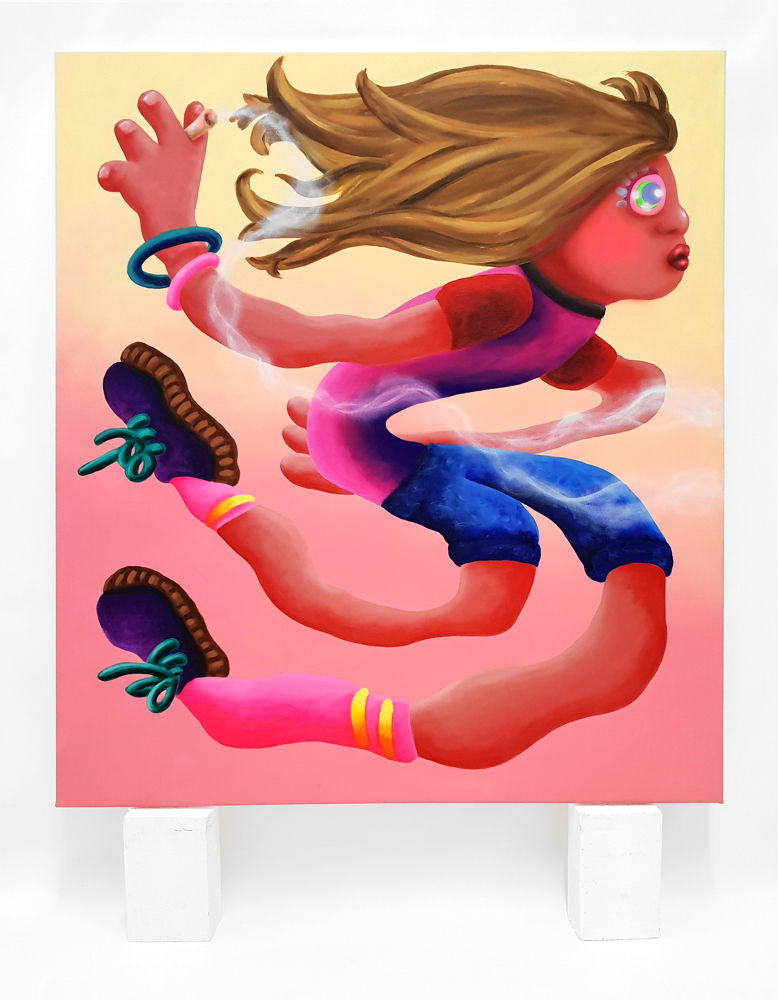 HC: What are the future plans for Semi Skimmed, more pop-up exhibitions, print releases? Would you ever open a permanent gallery space?

CC: We have many more shows planned, with something even pencilled in for early December, twelve days of Christmas type event with daily releases. We also have a warehouse booked for next May, that will be our biggest event to date and the first to not use an existing gallery as the venue.

For 2019, we have also pencilled in four group shows and a solo exhibition. We plan to introduce print releases next year as well and have an amazing screen printer lined up. It’s just about finding the right edition to release as we don’t want to produce folder fillers, cheap prints that never get hung.

Currently, the three-year plan is to have a physical space of our own, but I don’t want that to come at the expense of being able to fund events. For the same cost as permanent rent and business rates we would be able to hold ten pop-up shows, so that balance is something we will continuously reevaluate at as Semi Skimmed evolves. 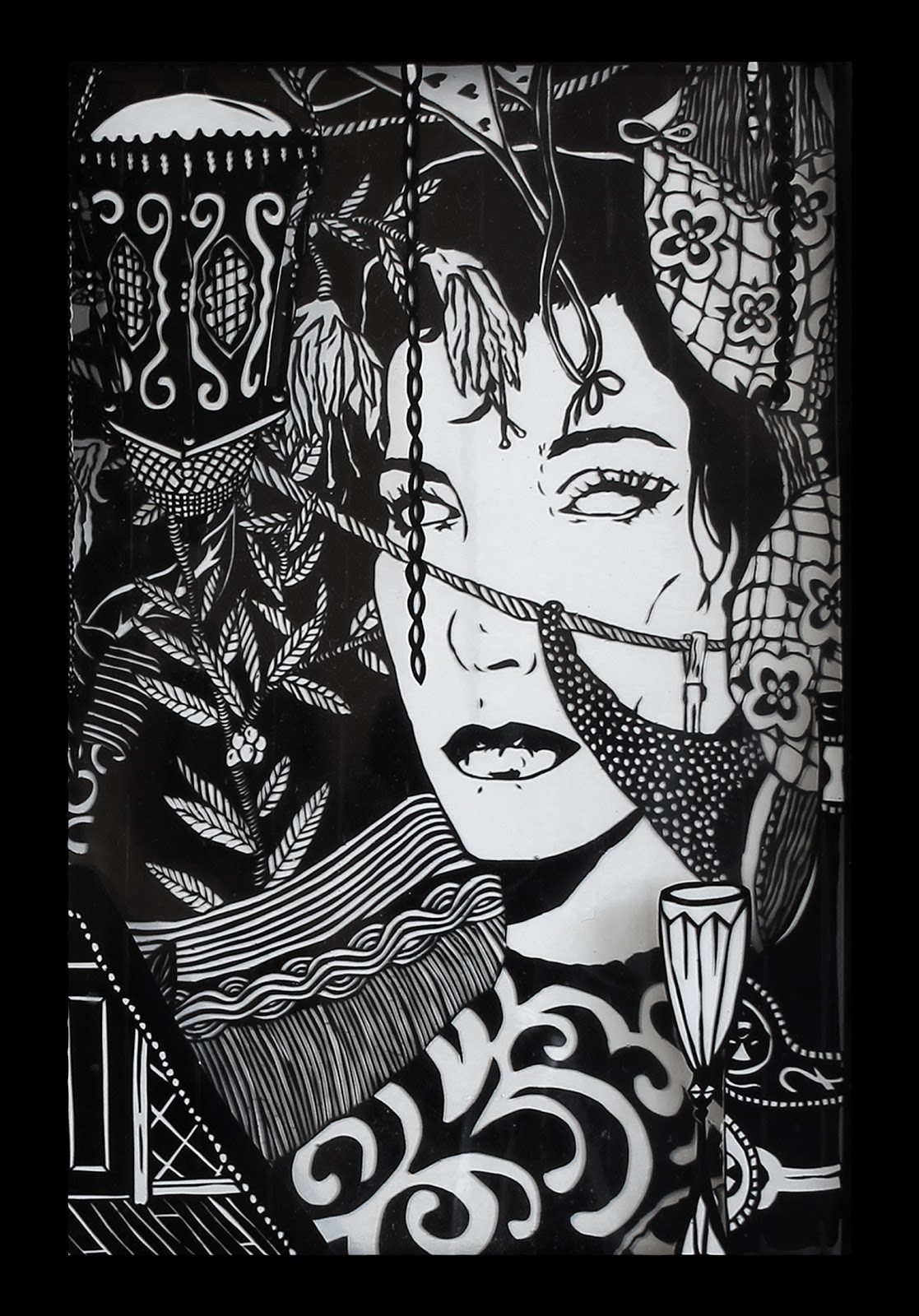 HC: Finally, having yourself exhibited widely around the world, including the aforementioned sell-out exhibition, ‘Every Time I Close My Eyes, All I See Is This’, at Breeze Block Gallery in Portland, OR (covered), as well as solo exhibitions at Galleri Geo (Norway, covered), Moosey Art (Norwich, UK, covered) and Prescription Art (Brighton, UK, covered), how do you plan to balance your own artistic career alongside the running of Semi Skimmed?

CC: I think it’s actually going to help long-term. For now, the running of Semi Skimmed has slowed down my output, but although I have less offers for work coming in, the ones that do are ‘bigger’ opportunities. For a while I used to accept every invite that came my way, which definitely led to a watering down of my output, quantity over quality in some cases. It also meant I did most of my development in public, forgetting to self-edit perhaps as much as I should have.

I now mainly exhibit with Thinkspace gallery. I’ve had some mental health and drug issues over the last few years so it’s great when people stick by you and don’t go quiet when you’re struggling. I have a solo show with them booked in for 2020, so I’m mainly regaining my momentum, working towards that while showing work in their group shows such as the POW! WOW! and SCOPE franchises.