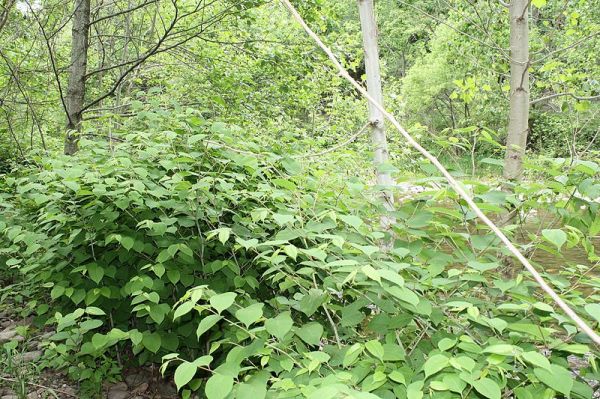 The invasive plant kudzu was introduced to the US from Japan at an international exposition, and we’ve been making jokes about it in the South ever since. It grows uncontrollably in the summer and covers any property that isn’t mowed or otherwise tended. Japanese knotweed was also brought from Japan to an exhibition and then was found to be terribly invasive in climates too cool for kudzu. But knotweed is harder to control and does a lot more damage.

Along streams and rivers, knotweed grows into a wall that hides the water. Along roads, its arching canes can make it hard to see around bends. In Bronx River Forest, knotweed once grew so thick that driving along its paths was “like being in a knotweed carwash,” New York City conservation manager Michael Mendez told me. “There were people living in the knotweed,” he recalled. It was a good place to hide.

Knotweed can grow through cracks in cement, between floorboards, and out from the joints in a stone wall. “You can see it everywhere, along the roadside, in every city,” said Jatinder Aulakh, an assistant weed scientist at the Connecticut Agricultural Experiment Station. In the landscapes it has infested, it is impossible to imagine what was there before—and harder still to foresee a future without it. “There is no insect, pest, or disease in the United States,” Aulakh said, “that can keep it in check.”

You can cut it, pull it, and dig it up, but all it takes is a tiny piece of the root remaining to propagate into another plant. Knotweed is so hard to kill that its presence will affect property values. Read about the spread of Japanese knotweed at Slate. -via Boing Boing