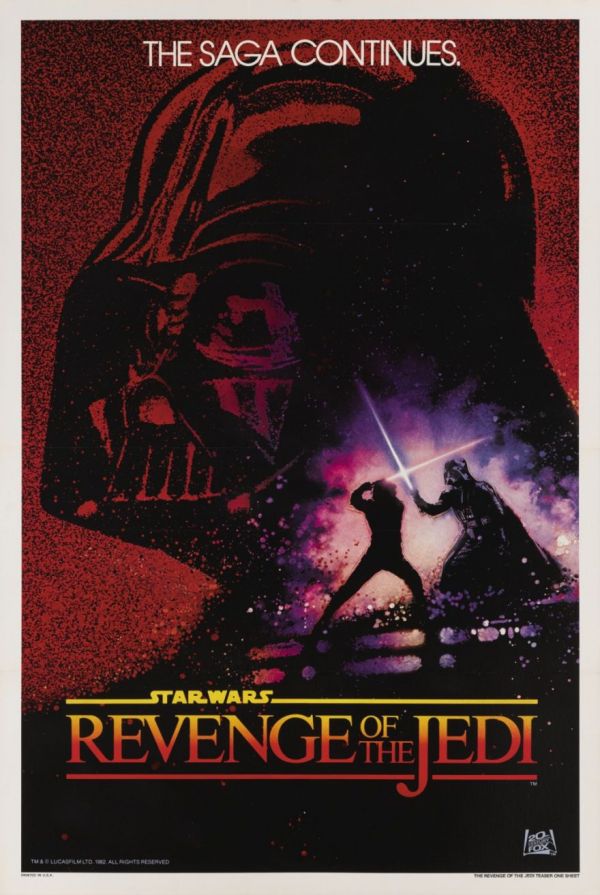 An official movie poster for the Star Wars film Revenge of the Jedi is going up for auction. Hey, wait a minute- there was never a movie named Revenge of the Jedi! And that explains why this poster is rare. It was issued ahead of the 1983 film Return of the Jedi. Wikipedia has the story.

The original teaser trailer for the film carried the name Revenge of the Jedi.[30] In December 1982, Lucas decided that “Revenge” was not appropriate as Jedi should not seek revenge and returned to his original title. By that time thousands of “Revenge” teaser posters (with artwork by Drew Struzan) had been printed and distributed. Lucasfilm stopped the shipping of the posters and sold the remaining stock of 6,800 posters to Star Wars fan club members for $9.50.

Of course, the Sith were not at all above seeking revenge, so the title was recycled for the 2005 film Revenge of the Sith. Anyhow, the poster is expected to bring somewhere from $1800 to $3200. Since it’s being sold by Sotheby’s, you’ll have to pay in pounds. -via Boing Boing