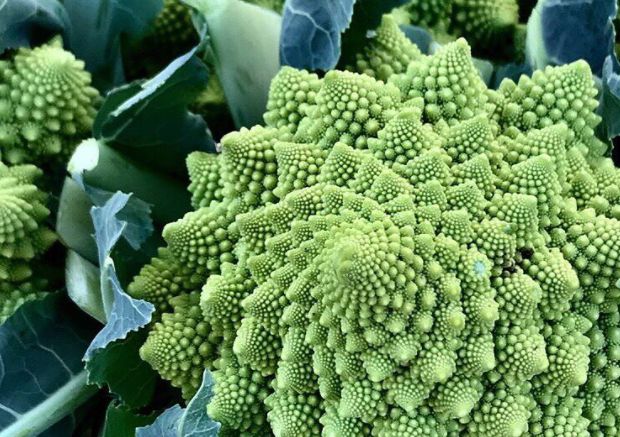 Beauty is subjective, of course. You might look at Romanesco, a vegetable that looks like the prettier cousin of broccoli and cauliflower with its geometric patterns. Romanesco, also known as Roman cauliflower, has a flowering head that grows in a naturally occurring fractal, as 10Best details:

For those of you who slept through that week of math class, fractals are geometric figures or curves that repeat themselves at progressively smaller and smaller scale, even as each piece maintains the same form as the whole. If you can’t quite wrap your rusty mind around that high school concept, just take a peek at the twisty, spiny protrusions of a Romanesco, which spin off into logarithmic Fibonacci spirals.

Romanesco’s season in the sun is quite brief. Because it’s grown in a few key parts of the world – namely Italy and part of the eastern United States – a select, lucky few are treated to multiple Romanesco seasons.

And speaking of enjoyment, you might be wondering what it tastes like. Romanesco is described as possessing a somewhat earthy taste that meshes elegantly with other flavors like garlic, white wine and even chili peppers. Like broccoli, Romanesco can be eaten raw, but also holds up well under various cooking methods like stir frying or roasting in an oven. As the florets heat up, they can become surprisingly sweet, making Romanesco a perfect addition to curries and other spicy dishes.