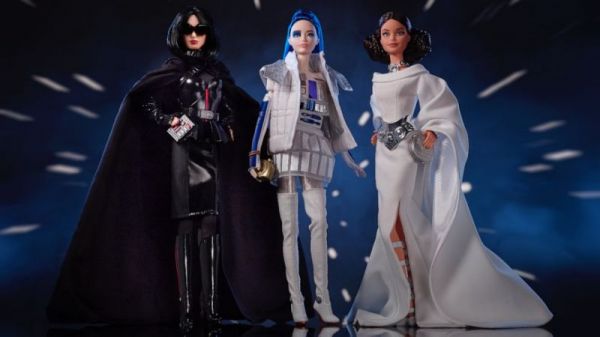 Star Wars movies are released in December in order to sell toys. And they are starting to be rolled out for the year’s film, Star Wars: The Rise of Skywalker. Mattel, in collaboration with Lucasfilm, has announced Star Wars™ X Barbie®, a series of Barbie dolls dressed in classic Star Wars fashion. Only one is a somewhat faithful rendering of a character: Princess Leia, in her white dress from A New Hope. The others are styled as Darth Vader and R2D2, although they are female fashion dolls. The dolls were designed by Robert Best, who discusses his creations at the Barbie blog. The Barbies will ship in November, and can be pre-ordered now at $100 each. Between the 1977 imagery and the price, one would not expect Santa Claus to leave these out for children.  -via Geeks Are Sexy