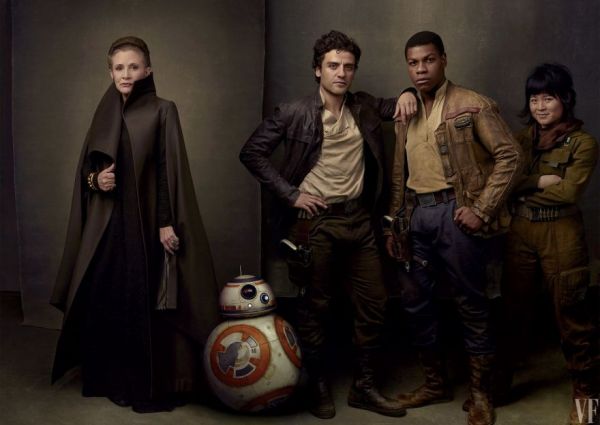 If you’ve been itching to see the next Star Wars movie, you’ll have to wait until December. But that doesn’t mean there’s no Star Wars now. Vanity Fair talked to the cast and crew about The Last Jedi, as well as writer and director Rian Johnson. There’s a lot of information here, ranging from the overall moviemaking system to specifics about The Last Jedi.

Part of what makes Lucasfilm’s new system work is that [producer Kathleen] Kennedy has set up a formidable support structure for her filmmakers. Upon her arrival, she put together a story department at Lucasfilm’s San Francisco headquarters, overseen by Kiri Hart, a development executive and former screenwriter she has long worked with. The story group, which numbers 11 people, maintains the narrative continuity and integrity of all the Star Wars properties that exist across various platforms: animation, video games, novels, comic books, and, most important, movies. “The whole team reads each draft of the screenplay as it evolves,” Hart explained to me, “and we try, as much as we can, to smooth out anything that isn’t connecting.”

What the story group does not do, Hart said, is impose plot-point mandates on the filmmakers. Johnson told me he was surprised at how much leeway he was given to cook up the action of Episode VIII from scratch. “The pre-set was Episode VII, and that was kind of it,” he said. If anything, Johnson wanted more give-and-take with the Lucasfilm team, so he moved up to San Francisco for about six weeks during his writing process, taking an office two doors down from Hart’s and meeting with the full group twice a week.

Among Johnson’s inventions for The Last Jedi are three significant new figures: a “shady character” of unclear allegiances, played by Benicio Del Toro, who goes unnamed in the film but is called DJ by the filmmakers (“You’ll see—there’s a reason why we call him DJ,” Johnson said); a prominent officer in the Resistance named Vice Admiral Holdo, played by Laura Dern; and a maintenance worker for the Resistance named Rose Tico, who is played by a young actress named Kelly Marie Tran (and who is the sister of Paige, the character I witnessed in the scene with Poe Dameron). Tran’s is the largest new part, and her plotline involves a mission behind enemy lines with Boyega’s Finn, the stormtrooper turned Resistance warrior.

We also learn about Carrie Fisher’s expanded role in the new movie, and the how her death affected the rest of the cast. The article is accompanied by gorgeous photographs by Annie Leibowitz. See it all at Vanity Fair. -via Digg

This Runescape Gamer Lost His Lawsuit Battle To Get Unmuted

Why Are We Always Hungry?

How Did Science Fiction Imagined The 2020s?

Do You Want To Live In A Fungi Home?