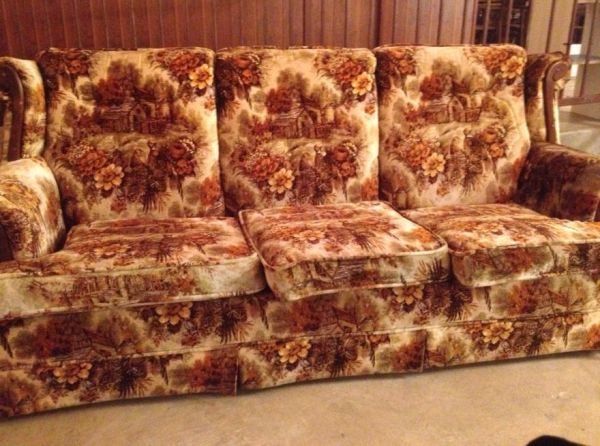 There are generally three ways you are familiar with the couch pictured. Maybe you sat on one while watching TV in the 1970s. Maybe your parents or grandparents still have it in their home because why should they change a perfectly good couch? Or maybe you -or someone you know- wouldn’t have a couch at all if grandma hadn’t decided to finally get rid of a perfectly good couch. This couch has even been made into a meme because it is so ubiquitous in elderly people’s homes.

“This couch is a hat tip to Early American or Colonial Revival décor, which was massively popular through most of the 20th century—married to an indestructible, essentially plastic Space Age fabric, which our grandparents would have found appealing because our grandparents didn’t tend to redecorate constantly,” Kueber explains. “They had one sofa. They bought their furniture on a layaway, and by the time they found enough money for a sofa, they wanted it to last forever. So the good news was that fabric was going to last forever—but the bad news was that fabric was going to last forever.

“I say that in a loving way: They got the fashionable look of the day, which was this novelty print on their sofa, and it was made from a fabric that had all the modern qualities that one would want. So, hooray! I’m sure it was a big day when that sofa came home.”

The first iteration of Colonial Revival originated around 1876, when Victorians were celebrating the United States centennial, and the throwback interior style—which sought to shed the frilly excesses of cluttered Victorian neo-Rococo fashion—remained popular up to 1940. It branched off into two larger design subsets: 18th-Century Colonial Revival and Early American. The former embraced the stately, symmetrical style seen in the homes of the Founding Father elite—the exteriors defined by red brick, white shutters, and maybe symmetric neo-Classical columns; the white-walled interiors a combination of elegant, scrolling Georgian and Neo-Classical upholstered wood furnishings and gold-trimmed mirrors. Early American is more about the hard-working pilgrims, farmers, and pioneers in their log cabins and farmhouses with heavy, simple wood furniture.

The Grandma Couch doesn’t exactly fit either of those styles, but it was quite popular to accompany the dark wood paneling and the TV that was too big to lift in a home furnished 50 years ago. Read the history of the Grandma Couch and the home decor that went with it at Collectors Weekly, and don’t miss the gallery of pictures at the end that will take you back in time.