We feel utterly fantastic when we do something kind for someone else. Human beings are hardwired for being social and altruistic, so giving someone a gift often feels like we’ve received one as well. In short—generosity is greatly valued around the world. However, when it comes to money, things can get very messy. Some people take advantage of others’ kindness, generosity, and sense of duty.

One such situation happened to redditor u/thesocialmediadetox, who saw a very different side of her friends when they went out to dinner to celebrate one of their birthdays. The OP shared in a post on r/povertyfinances how the three of them bailed on her, leaving her to foot the huge bill. It was equal to the post author’s entire budget for the week.

It’s an absolutely horrible position to find yourself in, especially when money is tight, you’ve got a family to take care of, it’s your first girls’ night out, and the food was sub-par. Scroll down for the entire story in the redditor’s own words, dear Pandas. Let us know what you think and share what you would’ve done if you were in her shoes.

Bored Panda reached out to pie artist and food expert Jessica Leigh Clark-Bojin, the author of ‘Pies Are Awesome: The Definitive Pie Art Book: Step-by-Step Designs for All Occasions,’ for a chat about ‘going Dutch’ at fancy restaurants, whether it’s possible to salvage friendships after your ‘friends’ bail on you, and she also gave some tips on ‘pinching grocery pennies’ when you’ve had unexpected expenses and have a family to feed.

Birthdays are supposed to be happy occasions. But tensions can rise when the bill finally arrives 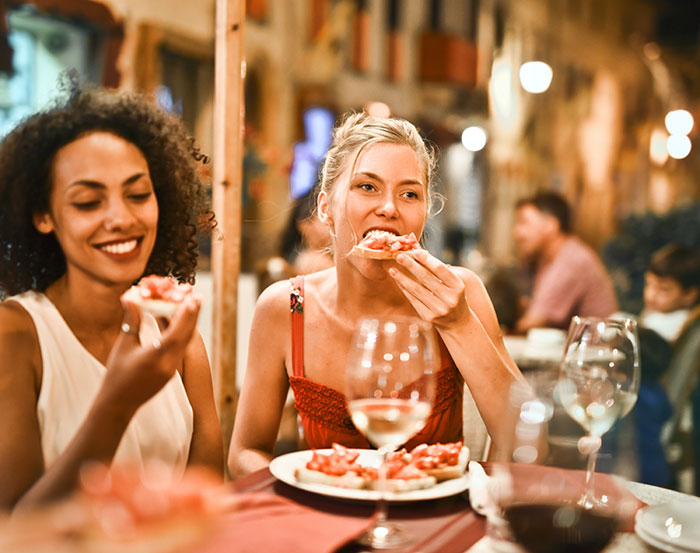 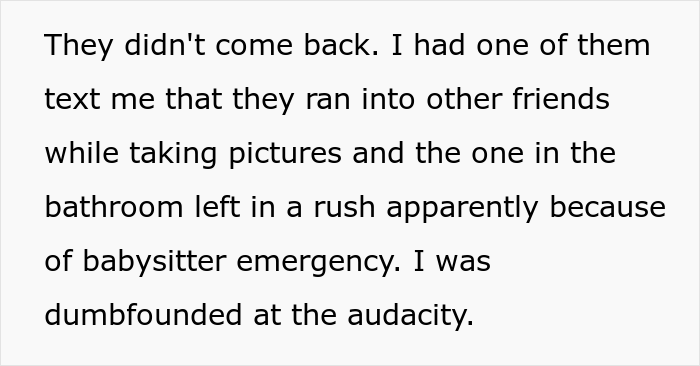 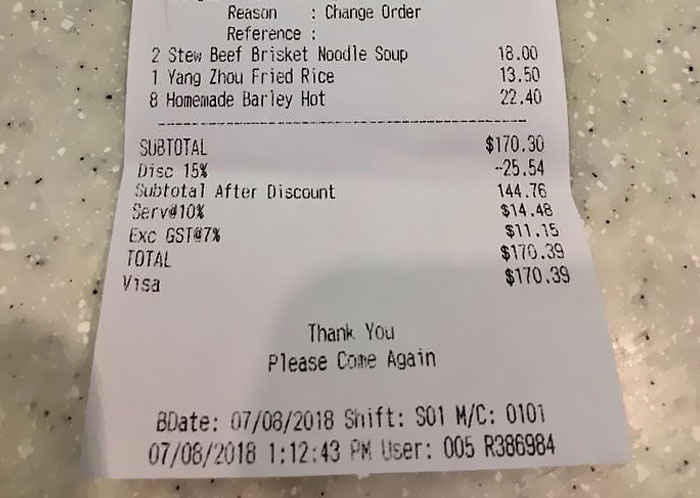 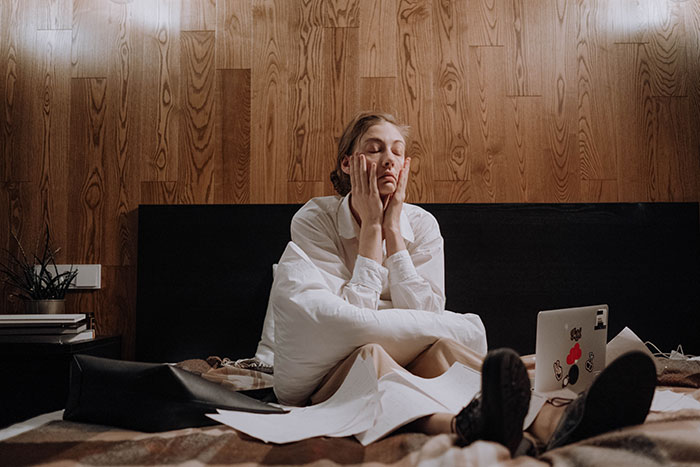 “There are two possible scenarios at play in a situation where a group of friends bail and leave one friend to foot the bill alone: a) they are under a misapprehension that the friend they left to pay has substantially more money than they do, and would therefore not find it a hardship, or b) they know their friend is as skint as they are, and they are just being jerks,” pie artist and food expert Jessica, @thepieous, told Bored Panda.

“If the former is the case, I would say it may be possible to repair the friendship after a frank conversation about the misunderstanding, followed by an earnest apology AND payment of their cut of the bill. If the latter is the case… well. You may need to look at surrounding yourself with a nicer caliber of people!” she pointed out that, in some cases, a change of friends may be in order.

“In most people’s friend groups (unless you and all your friends have a last name of Kardashian or Jenner), there is an understanding that everyone pays their own way for meals. If one friend has a sudden windfall, they may opt to treat the whole group, but in these instances, that is made explicit upfront. If money is a concern for you, there is absolutely no harm in confirming up front that everyone will be going Dutch, or letting the server know that you will be on seperate bills up front,” Jessica explained the etiquette at restaurants.

“And speaking of finding new friends… maybe you could take the opportunity to find some new friends who appreciate fiscal responsibility and band together on some of these budget-saving grocery strategies that leverage the power of numbers to get the best deals?” the baking and food expert told Bored Panda that buying groceries in bulk and then freezing them together with your family, friends, or neighbors can help you save quite a bit of money.

That way, you take advantage of bulk discounts. Meanwhile, if you happen to have any friends who are able to buy from restaurant suppliers or they’re part of a co-op, they can help you save even more money on food. Pie artist Jessica noted that you can definitely freeze food to eat later without sacrificing its nutritional value… so long as you avoid freezer burn. That means making sure that you pack the food properly.

Families who are feeling financial pressure can also opt to go meatless in order to balance their grocery budgets. Red meat is very expensive, so having a few meatless days every week can really help cut back on the cost of feeding your family, so long as you find alternate sources of protein.

A quick and inexpensive meal that you can make for the entire family is a stir-fry, using cheap and seasonal local ingredients. Opt for rice, a bit of soy sauce, some herbs grown either in your garden or neighborhood, and throw in some discounted vegetables and protein into the mix. The veggies you cook don’t have to look pretty to taste good. Have a chat with your local grocer if they have any ‘damaged’ or ‘ugly’ vegetables that you can buy at a huge discount (or even get for free). And voilà, you’ve got yourself a well-fed family.

The author of the thread, redditor u/thesocialmediadetox was absolutely destroyed by what happened with her (supposed) friends.

“I don’t go out to eat. This was supposed to be a treat. My first girls’ night out. Now I’m sitting here trying to figure out how to make my existing groceries last longer because I’m out $100 I didn’t expect to be,” the OP wrote, pointing out just how bad the entire situation was for her. “I’m a mix of disappointment and just anguish. I didn’t even enjoy my dinner because I kept thinking the food was mediocre for the price.”

The author of the post was completely shattered. She shared a few more thoughts in the comments 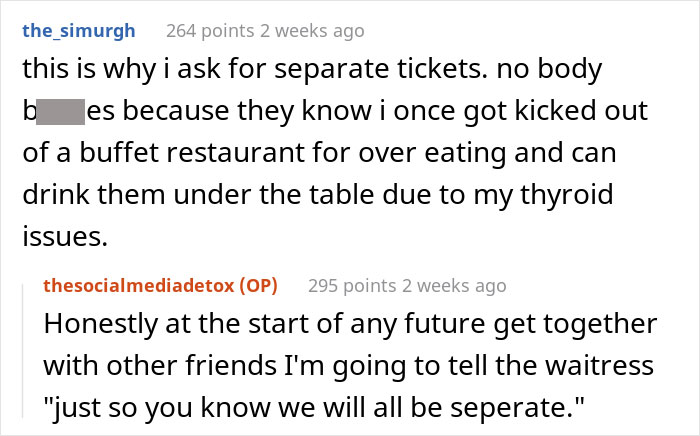 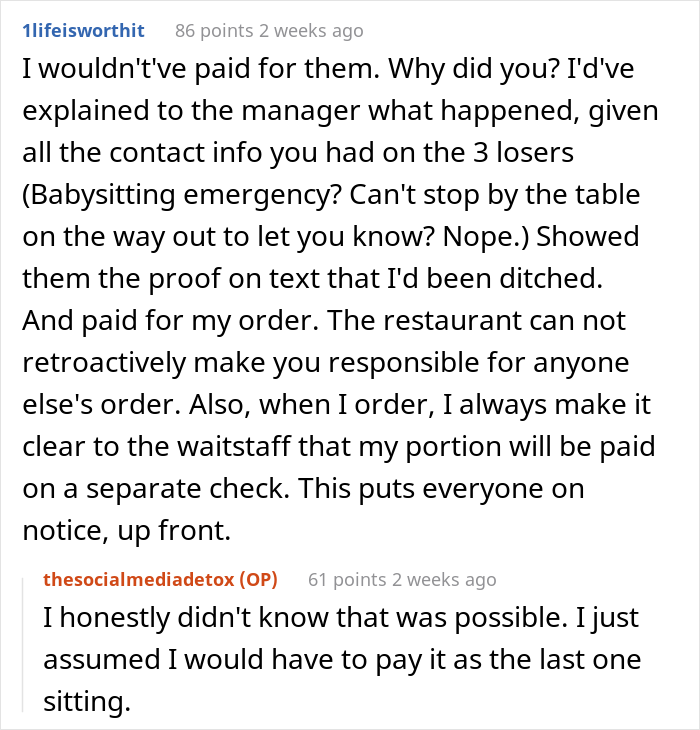 With soaring food costs, sky-high rent prices, and expensive fuel, pretty much everyone’s feeling the strain, no matter where they live. For instance, in the 19 countries that use the euro, inflation has risen from 9.9% in September to a whopping 10.7% in October. CNN reports that energy prices rose to nearly 42% year-over year; meanwhile, the cost of food increased by over 13%. To compare, annual inflation in the United States is currently around 8.2%.

In the UK, the price of budget food items in supermarkets rose by 17%, according to The Guardian. The price of cooking oil alone soared by 65%. Annual inflation is at 10.1%, the worst it’s ever been in the past 40 years. In short, everyone’s feeling their wallets getting lighter and is forced to find ways to adapt. Some are choosing to cut back and are reevaluating what they spend their hard-earned cash on. Others are looking for ways to increase their wages or looking for side gigs.

Eventually, the global economy will bounce back. Though it’s unclear when, and how much hardship people will have to go through until that time. But worse than all of the data about inflation is realizing that your friends probably aren’t actually all that friendly. It’s a tough thing to stomach… though it’s a situation that many of you Pandas have probably been in at least once in your lives. The sudden realization that someone you trusted is untrustworthy is shocking.

Previously, Bored Panda spoke to Suzanne Degges-White, a Licensed Counselor, Professor, and Chair at the Department of Counseling and Higher Education at Northern Illinois University, about authentic and superficial friendships.

“Friendships are built on trust and mutual respect, so if you don’t feel in your gut that this is what a person is offering to you in the relationship, they aren’t a true friend. Also, friends recognize that the ‘giving and taking’ in friendships needs to be balanced over time,” she explained to Bored Panda.

“Friends who talk about us behind our back, aren’t there for us when our lives are crashing and we need someone to talk to, or aren’t there for us when we want to celebrate our successes—those friendships don’t reflect authentic deep friendship. When a friend takes advantage of us or lets us down repeatedly, then it is time to re-think whether this is a relationship that is worth the risk,” the professor said.

“Real friends are those people who are going to be there for you whether life is going beautifully for you or life has tanked and you feel like you’re in over your head. Friendships are about emotional and instrumental support—it’s a totally mutual, voluntary, reciprocal relationship. Therefore, we can all decide what we want to put into a friendship.”

The internet was absolutely appalled by how the OP’s friends treated her. Here’s what they had to say about it all 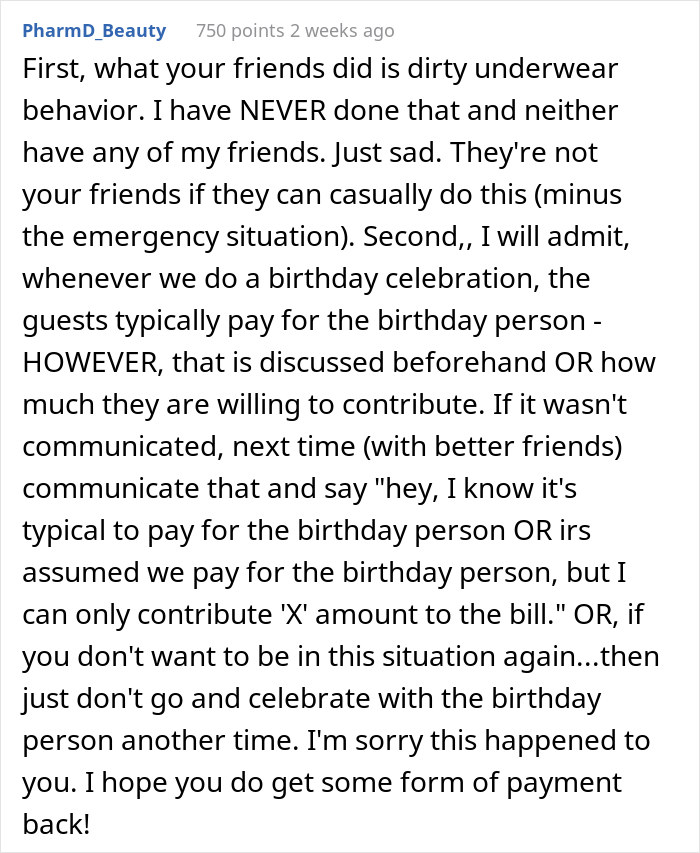 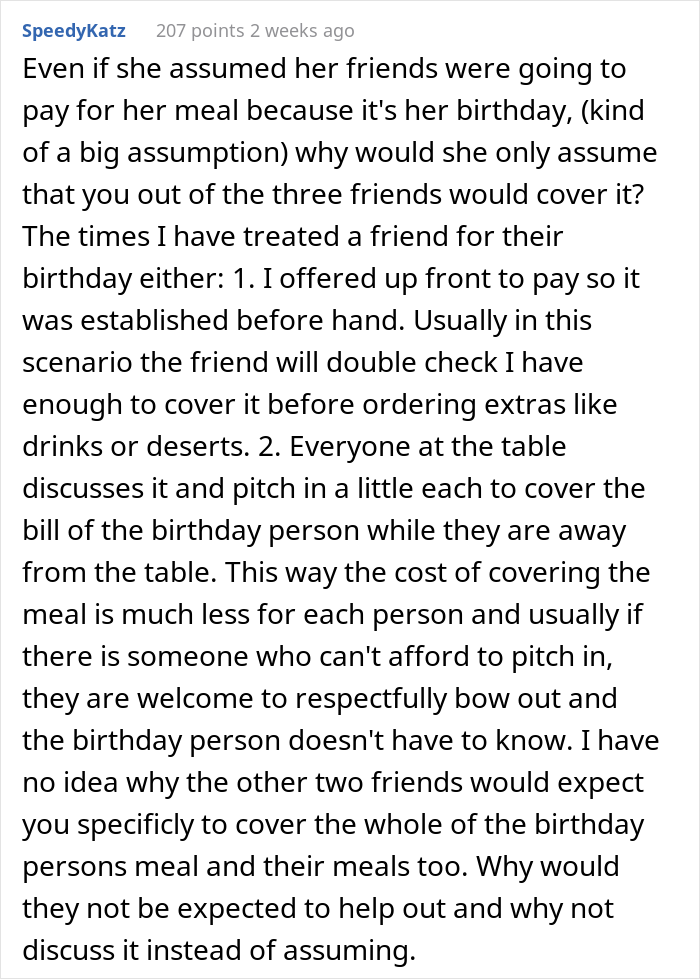 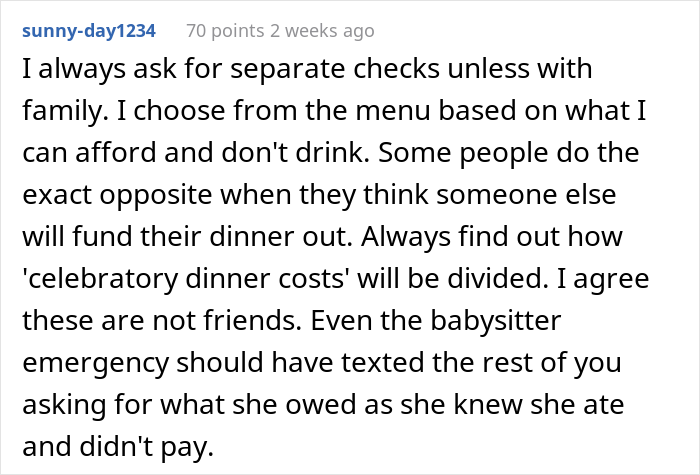 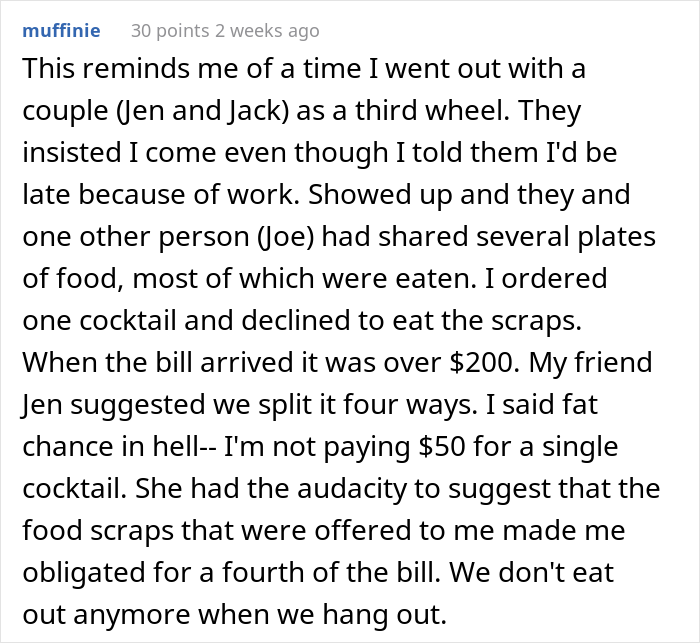 The post “It Was My Entire Weekly Budget”: Woman Shares How Her “Friends” Bailed On Her And Left Her With A Huge Bill first appeared on Bored Panda.