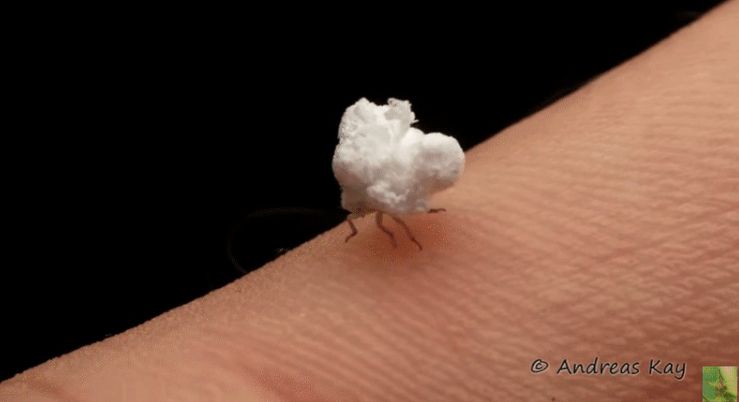 Just kidding, it’s not. It does look like one, though. Late physicist, biologist, and photographer Andreas Kay documented this odd creature during his time in Ecuador. The insect, a flatid planthopper nymph, looks like a walking piece of popcorn. Kay first shared the  video of the strange creature in May 2019, where the tiny insect is seen scurrying across his fingertip:

This is no ordinary bug, though—it looks like a tiny cloud or a piece of popcorn resting on little insect legs. There’s a reason for this strange appearance. The insect—which can be found in the Amazon rainforest—is covered with waxy white filaments for protection.

The unusual bug is one of roughly 12,500 known planthopper species on Earth.

Planthoppers are insects that closely resemble plants that grow in their own environments. As their name suggests, planthoppers are able to “hop” around from A to B. Kay doesn’t capture this movement in the video, but we’re sure the insect would look just like a popping kernel.