Natalia Cano told BuzzFeed that she got COVID from working at her local grocery store in January. “I felt really sick, but it was nothing extreme,” she said. “It didn’t feel like I was going to have any serious complications.”

But a few weeks after Natalia recovered from COVID, her sense of smell and taste started sending her strange signals.

The symptoms that Natalia now has to live with are due to a condition called parosmia. “If you have [it], you may experience a loss of scent intensity, meaning you can’t detect the full range of the scents around you,” Healthline explains. “People who have it can detect an odor that’s present — but the scent smells ‘wrong’ to them. For example, the pleasant odor of freshly baked bread might smell overpowering and rotten instead of subtle and sweet.”

Eventually, Natalia decided to share what she was going through on TikTok. “I don’t think anyone understands how much this affects your daily life. It’s not just that foods taste rotten, it’s that it tastes like garbage. It tastes like sewage. Gasoline, even,” she says in the clip. “It was affecting me so much that I developed gastritis, where every single meal, I was throwing up bile.”

Meet Natalia Cano, a 20-year-old who tested positive for COVID ten months ago 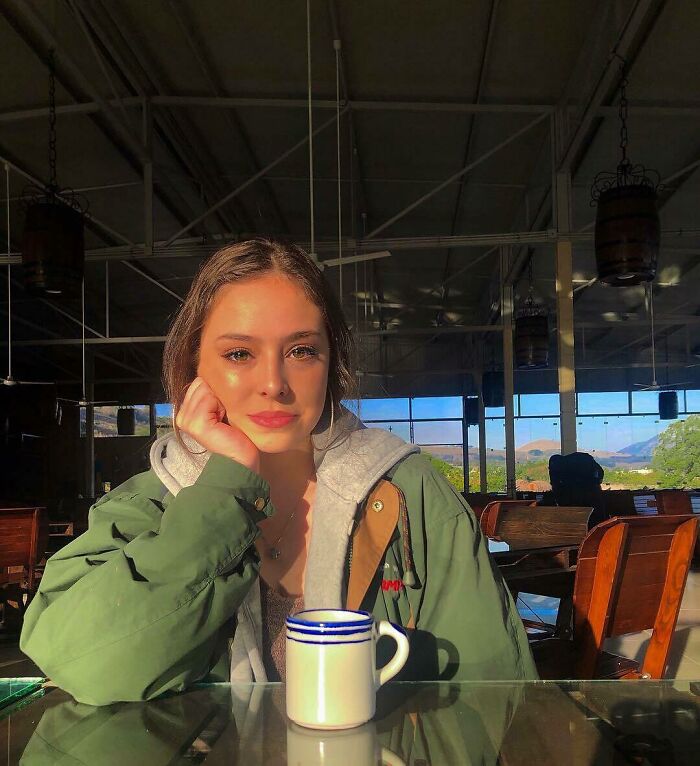 After more than 13 million people have viewed the, as many as 70,000 have flooded its comment section with a wide variety of advice, supportive comments, and (unfortunately) accusations that she’s just being overly dramatic, Cano told Mashable. “There’s just been a ton of unsolicited health advice… To me, it kind of goes to show how little information there is about this, and how people are just doing and saying and trying whatever to see what sticks,” she said. 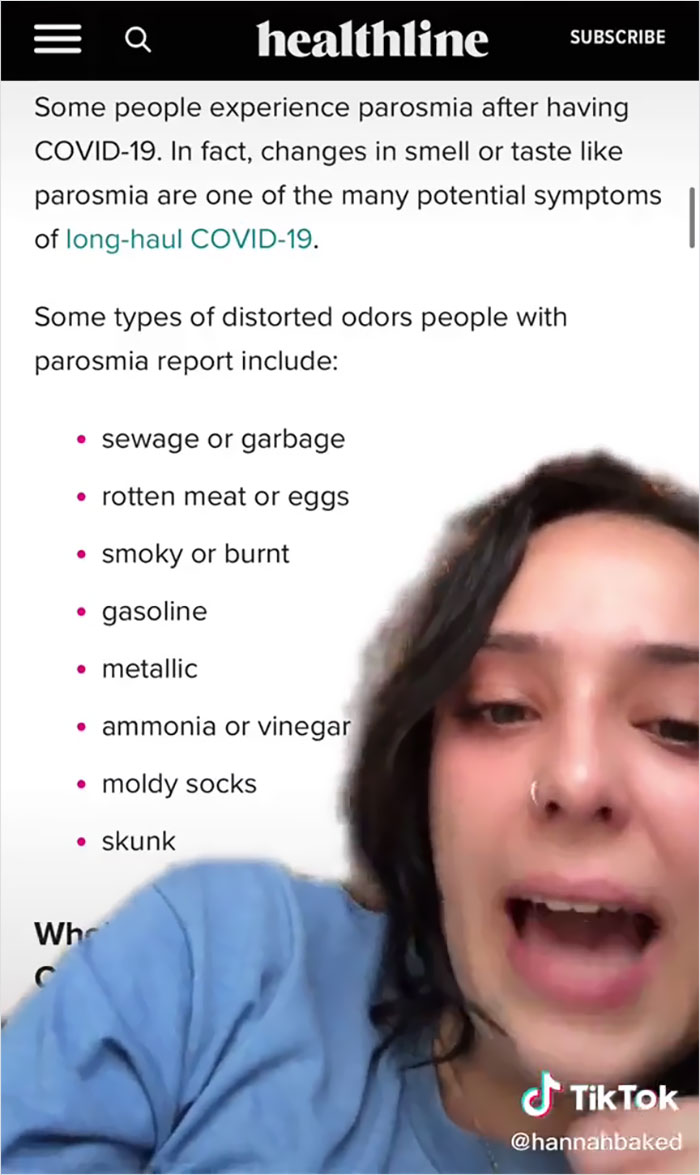 Parosmia is a known and studied subject in the medical world. It can be caused by many different things like traumatic brain injuries, viral infections, or even cancer treatments. The scary part is that it can’t always be fully cured.

When it comes to parosmia in COVID cases, scientists are still trying to figure out what exactly causes it and how long it lasts, which usually varies from a few weeks to months. 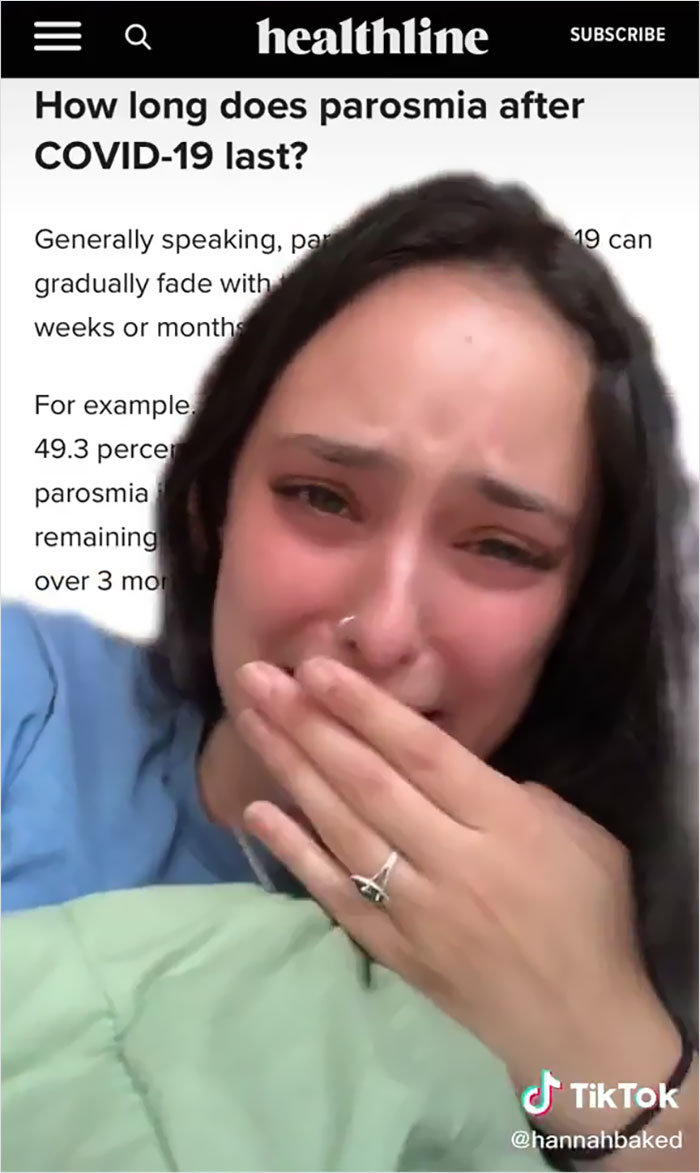 According to data published just a couple of weeks ago in the Journal of the American Medical Association (JAMA), at least 170,000 people are living with COVID-19 olfactory dysfunction (also known as COD), which is a general term for lost or distorted smell after a COVID-19 infection.

And that’s just the lowest end of the estimate. As many as 1.6 million people could be living with a damaged sense of smell and taste. As we reach the two-year mark of the pandemic, medical institutions and researchers are devoting more research time to the long-term effects of COVID-19, a variety of conditions arising after COVID infection often referred to as long COVID or long hauler COVID.

How long it takes to recover from COVID-19 is different for everyone.

Some people feel better in a few days or weeks and most will make a full recovery within 12 weeks. But for others, symptoms can last even longer.

The chances of having long-term symptoms do not seem to be linked to how ill you are when you first get COVID-19. That means people who had mild symptoms at first can still have long-term problems. 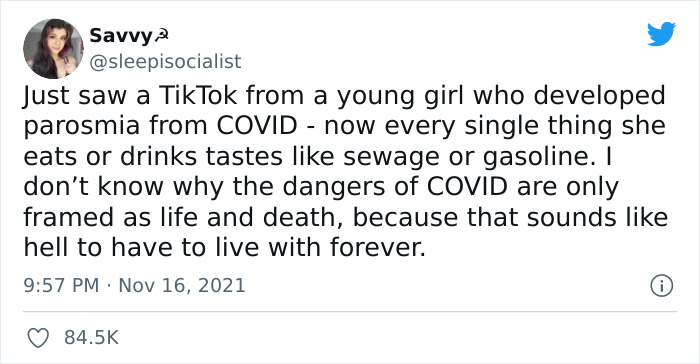 There are many more symptoms you can have after a COVID-19 infection. The common ones include:

Here’s the video. Long COVID is no joke that terrifies me just as much as dying. pic.twitter.com/b3P5kOi4St

Natalia said she and her family were, for the most part, extremely careful about COVID health protocols, but unfortunately that didn’t stop her from contracting it. She quarantined for two weeks and recovered soon after. The woman didn’t experience parosmia until a few months later, though, which seems to be common among the other people she’s spoken to. The symptoms emerged randomly, and she started noticing it as she drank the water from her college dorm room tap. Now, Cano can barely maintain a healthy weight. Her condition made her lose 30 pounds and has even passed out.

“It is literally torture every single time I eat something, and I’m so terrified of food. I’ve never been a picky eater in my entire life,” Cano said. “I have zero food security, because it’s not even that I can’t find anything that tastes good to me. It’s that the taste itself also changes on a month to month basis.” At one point, Natalia was throwing up bile every day and had excruciating stomach pains. Her mom now sends her care packages of Cliff bars, something high in protein that she can get down, and she can eat a few, ever-changing safe foods. At the time, those include pulled pork and pineapple.

Natalia battled chronic illnesses all her life, and parosmia is just as bad as those past experiences. And it’s not just eating — she can’t tolerate the smell of her favorite beauty products or even brush her teeth without feeling overwhelmed, often having to wear a mask to stifle scents in her own bedroom. Her favorite childhood smells, like tree leaves in the fall and fresh snow, have changed, too. “A lot of people take their masks off as they’re walking to class, because they don’t really need it, and I’ll have one or two masks on because the smell of fall air is garbage now — like even air smells bad.”

Her symptoms are yet another reminder why we need to fight COVID-19 not just in ICUs but on the streets as well. From social distancing and personal hygiene to getting vaccinated, we all need to do our part to get rid of this virus once and for all. 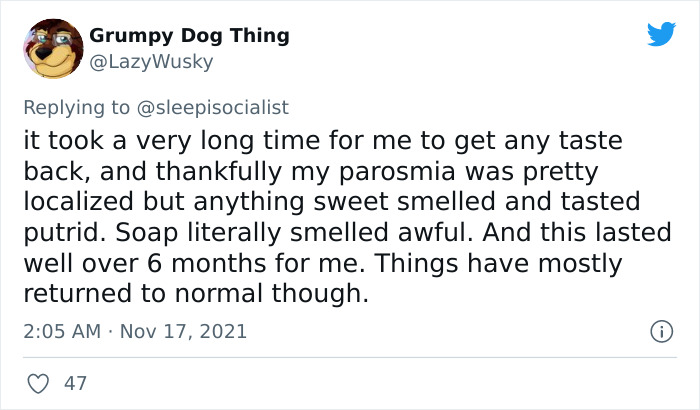 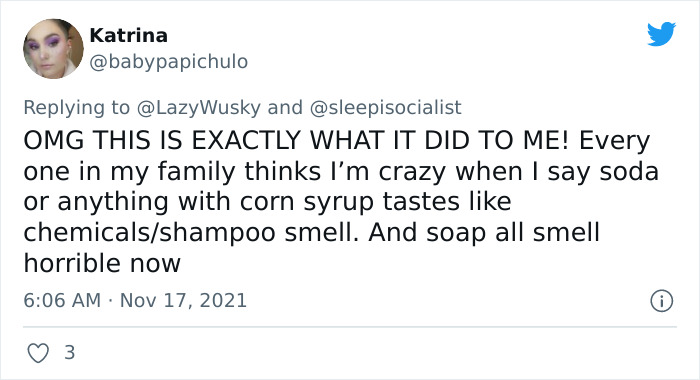 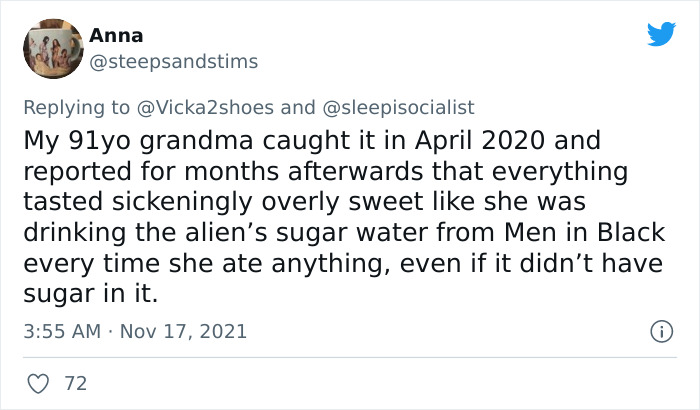 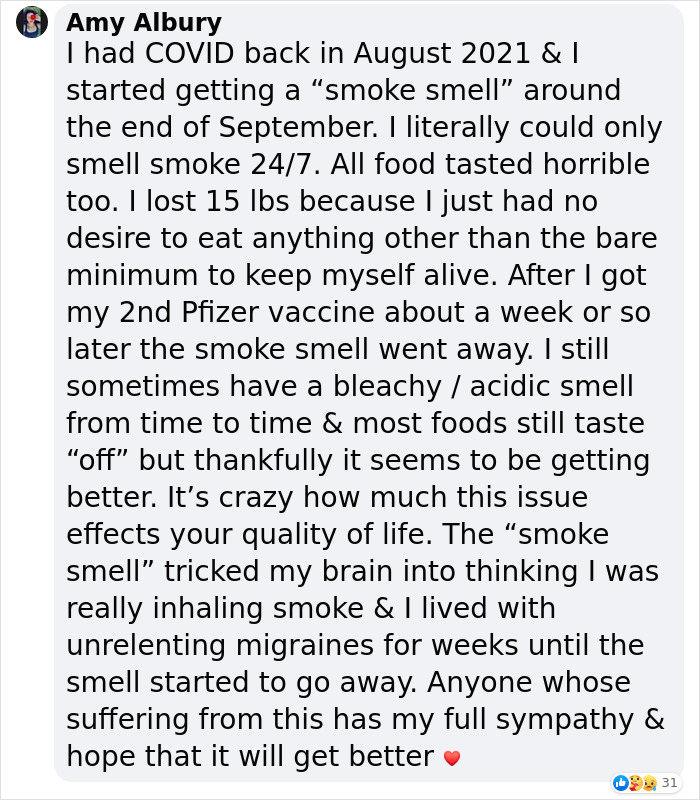 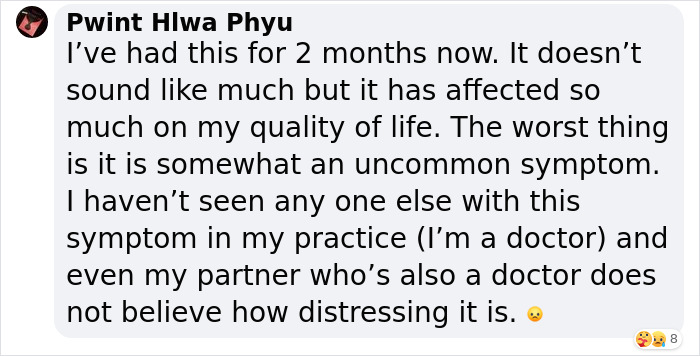 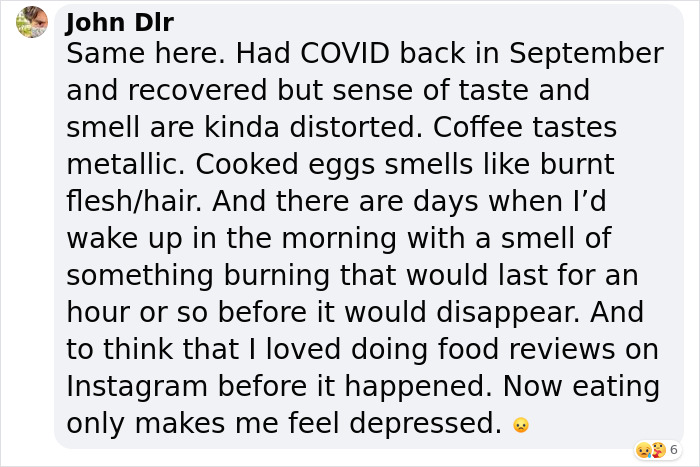 The post “It’s Garbage And Sewage:” 20-Year-Old Who Had COVID Opens Up About The Way It Completely Ruined Her Sense Of Taste And Smell first appeared on Bored Panda.

‘There Is No Cat In This Image’: 54 Pics Of Very Well-Hidden Cats

Woman Sends Her Boyfriend A Pic Of Her Hairy Legs To Have A Laugh, Doesn’t Expect He Would Respond By Shaming Her