Tim from Marketing must be really proud of himself today (spoiler: not an actual Tim).

A company has recently come under fire for… well… doing a lot of things that are just wrong. But the tl;dr version of it is that it decided to decorate its physical office using ghosts. Ghosts of actual people who used to work there. Before every single one of them were laid off.

If this does not scream tone-deaf, then I don’t know what does. So, let’s unwrap this whole deal really quickly.

Halloween is supposed to be a fun occasion with a little bit of spook here and there, but this company went full-on dark with their decor 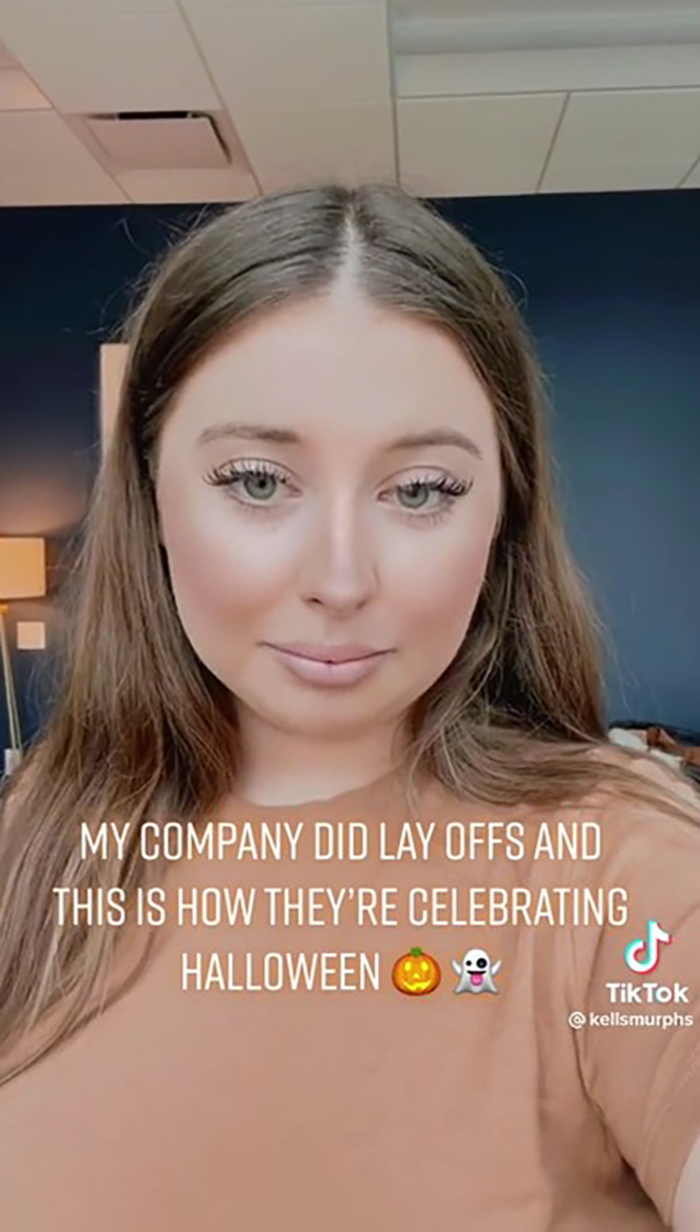 So, a video has surfaced on the r/AntiWork subreddit with the caption “Ghosts of employees past”. Originally, it was posted on TikTok by user Kelly Murphy (@kellsmurphs), as seen in the watermark. However, only stitches of the video now exist as the original poster has since then removed the video from her TikTok channel.

Some speculate that the video was removed to avoid any trouble that might come the company’s way. But we all know how the internet works and what goes on there more or less stays up there forever. Even more so if it goes viral. Which it did. But more on that later. 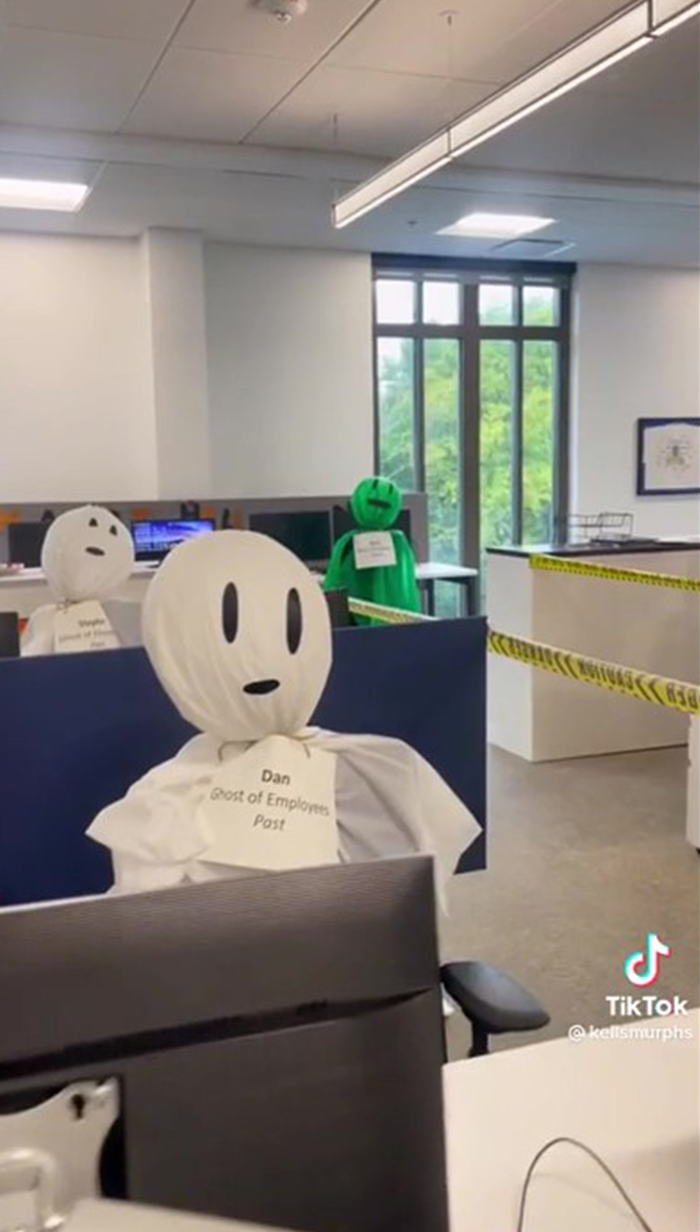 The video features the original poster, Kelly, explaining that her company (company name was not disclosed) recently did some layoffs, and then showing how they decided to celebrate Halloween in light of them. She then proceeds to show a bunch of workspaces populated by “ghosts” sitting in front of computers.

All would have been fine and dandy if not for the “name tags” plastered on each ghost, indicating names of former employees—the same ones who were laid off—and jokingly (surely in bad taste) pointing out that each one is a “ghost of employees past”.

The actual names of people who were laid off were featured on the ghosts, which folks online found in poor taste, whether it was a joke or not 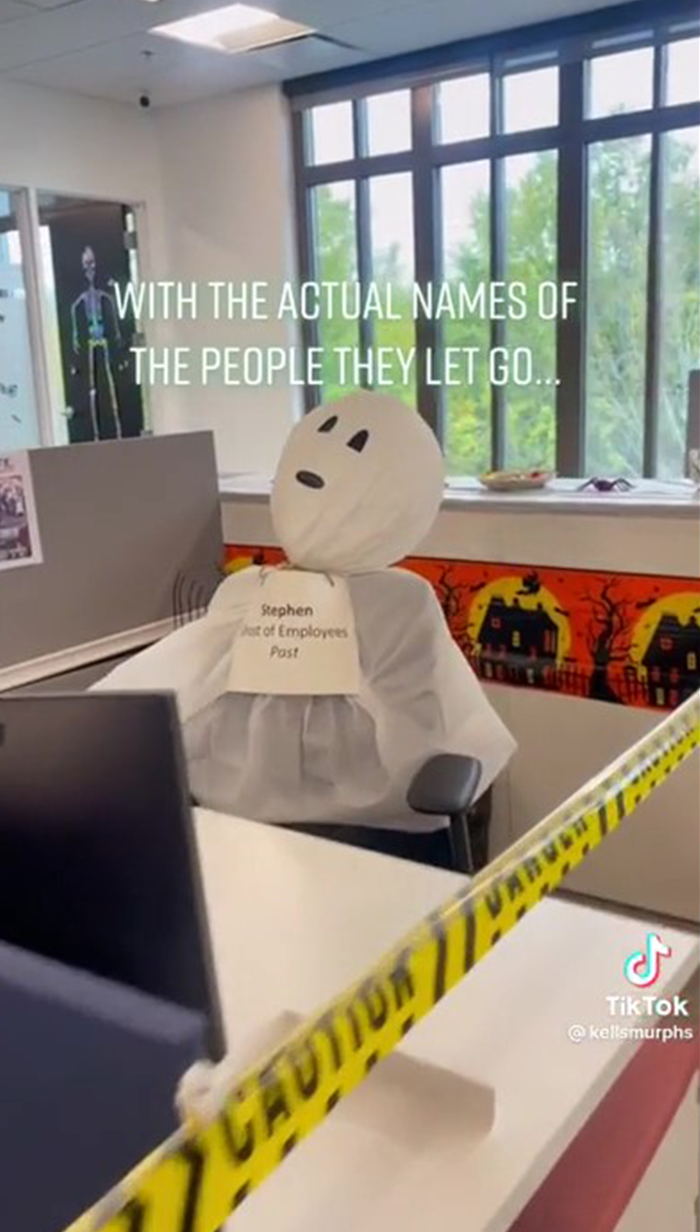 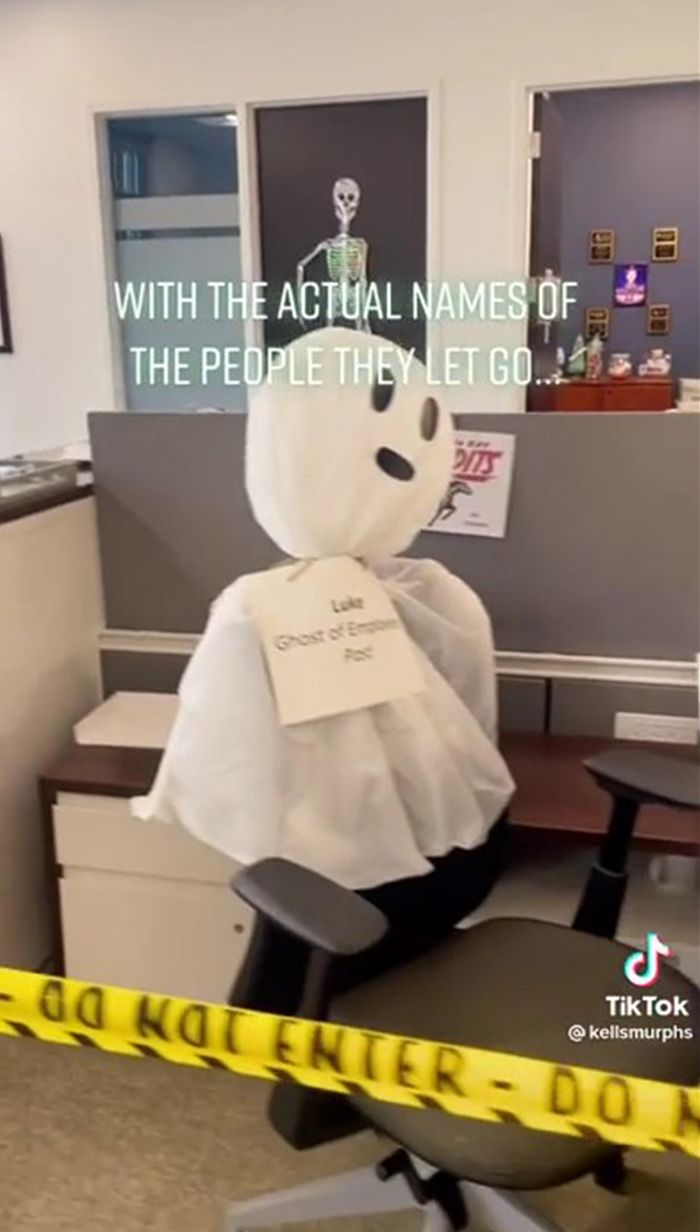 Now, if you don’t see what the big deal here is, I’ll let career coach Eve of Admin & Eve explain why this is wrong on multiple levels (as seen in her stitch): “This video perfectly sums up every single point I’ve ever made. First, it’s the layoffs where companies have absolutely no repercussions for ruining people’s lives—people who have built that company—and of course, it’s the joke. It’s the ghosts on the desks of the people who they laid off. You know, somebody who was laid off considered the person who thought of that joke to be a friend. This is why we don’t make friends at work.”

She continued: “Then it’s the joke itself. We are absolute punching bags and hysterical spectacles to companies. They don’t see us as people. They see us as a funny little ghost in a chair on Halloween. This video is exactly why the movement against corporate America and why quiet quitting should be prevalent right now.”

The original video is currently removed, but it lives on in the r/AntiWork subreddit where folks had a lot to say

And once the original video hit the relevant spaces on the internet, folks were reacting in pretty much the same way. Many pointed out that once it becomes known what company this is, it will be an absolute PR nightmare, and were wondering how this even managed to go through everyone involved and nobody thought this was a bad idea.

Some have, however, speculated that this could have been a clever way of stirring up some trouble for the company as a piece of critique for the management responsible for layoffs—a way of protest of sorts. Whatever the case, most agreed that this was messed up whichever way you spin it.

The original video has been removed by OP, so no virality metrics available there, but it was picked up by numerous people in the form of stitches, and the repost on Reddit got nearly 8,000 upvotes and a couple of Reddit awards. This is besides some online news media outlets picking the story up. You can check out the repost on Reddit here.

But before you go, share with us your thoughts on the issue! Or maybe share some of your “bad jokes” stories experienced at the workplace in the comment section below!

The post “It’s Gonna Take A Lot Of Pizza Parties To Fix This”: Company Called Out After Decorating Its Office With “Ghosts” Of Past Employees Who Were Laid Off first appeared on Bored Panda.