It’s natural for moms to want the best for their kids. And it’s equally natural to forget oneself and to start crossing boundaries with kids for that very reason. And it’s even more equally natural to forget oneself period and slowly but surely become a hypocrite in the eyes of the kid. So, natural, sure, but is it justified, that’s for folks to say.

And say they did. The Am I The A-Hole community has been discussing a story that covered all of these aspects. A woman approached the subreddit with her story of how her mom kept referring to her as a “sugar baby” because of her rich boyfriend, yet she ended up becoming a “sugar baby” as well, but couldn’t accept it when her daughter pointed that out.

It’s natural for moms to be protective of their daughters, but it can get out of hand if they’re not careful 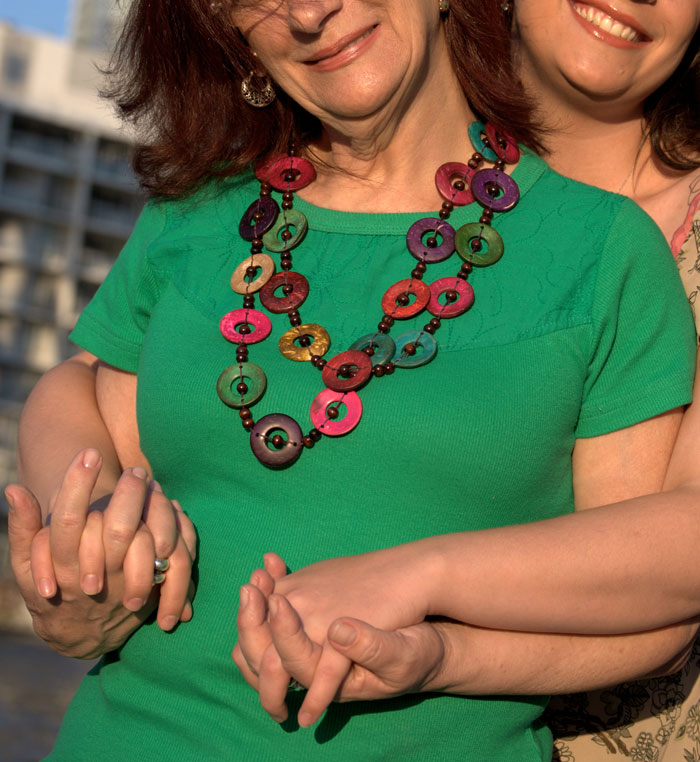 The story goes that OP’s (22-year-old female) mother (37-year-old female) got pregnant at a very young age—the math says at around 15 years of age—and the dad was never really in the picture with OP growing up. But the mom is said to have always been very hard working, ensuring her own independence, and proud of it.

And there’s nothing wrong with being proud of your hard work. Except when it goes to your head. You see, OP has a long-time boyfriend who comes from a well-off family. That and him showering OP with gifts was an immediate red flag for the mother. 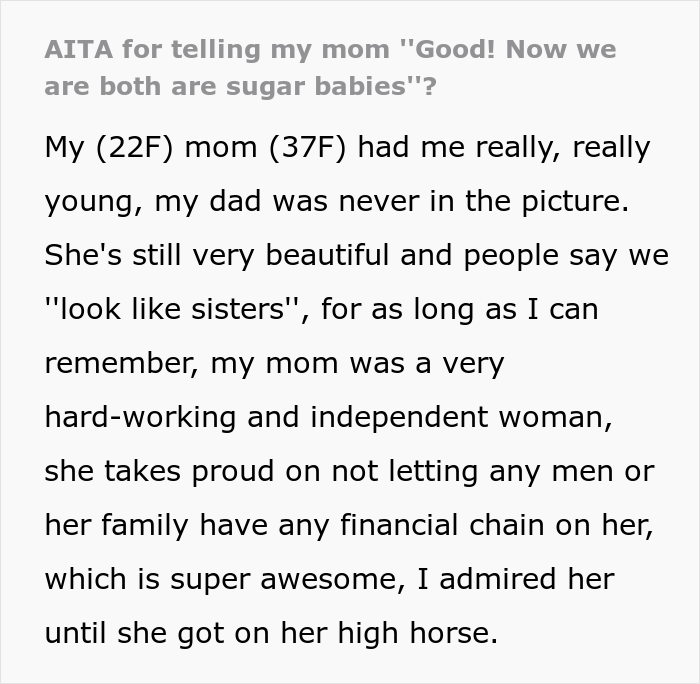 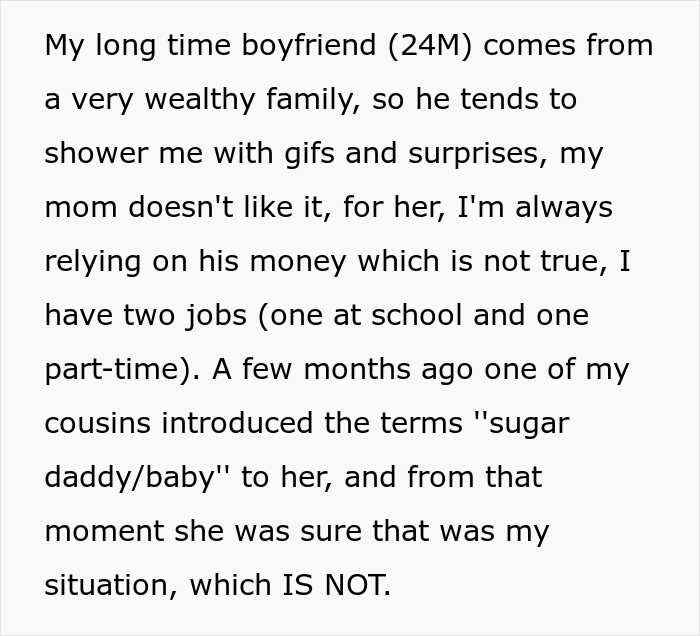 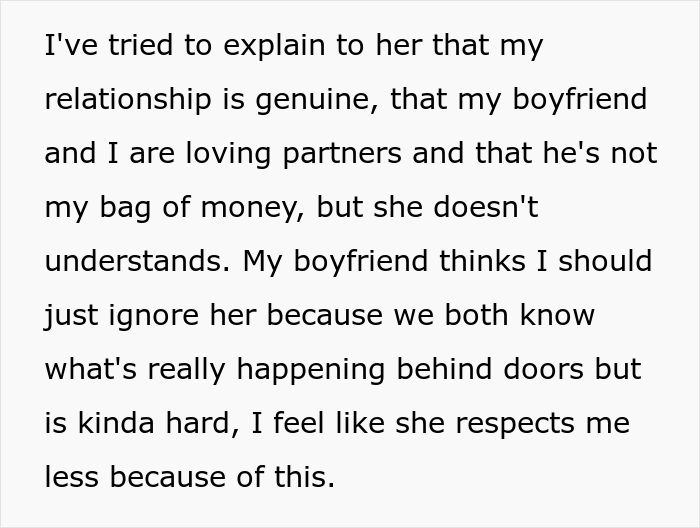 This in turn led to the mom learning the term “sugar baby” and since then she has put a name to this situation, which is not the case, according to OP. She made several attempts at explaining herself and how the relationship is genuine, but the mother’s personal experience and sense of security seemingly don’t allow her to be at ease about it.

OP’s boyfriend has suggested ignoring this, but it is hard, as it feels like the mother is losing respect for the daughter, and the daughter has always admired the mother’s independence and hard work. 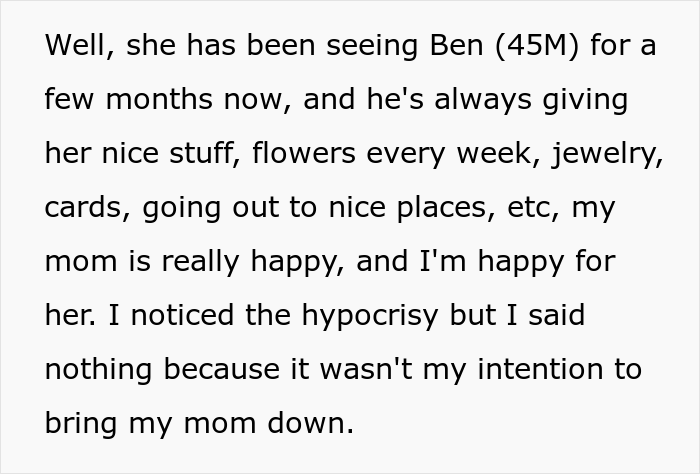 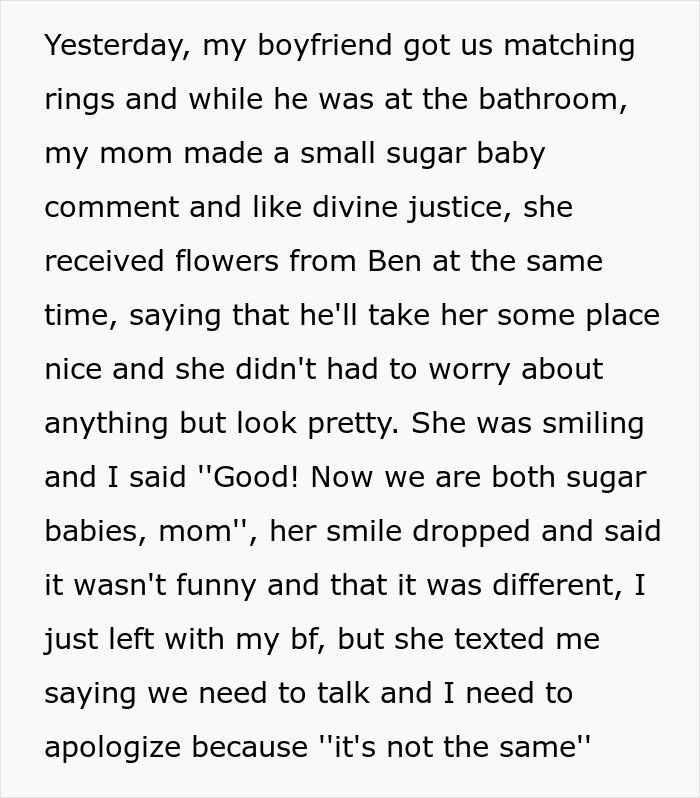 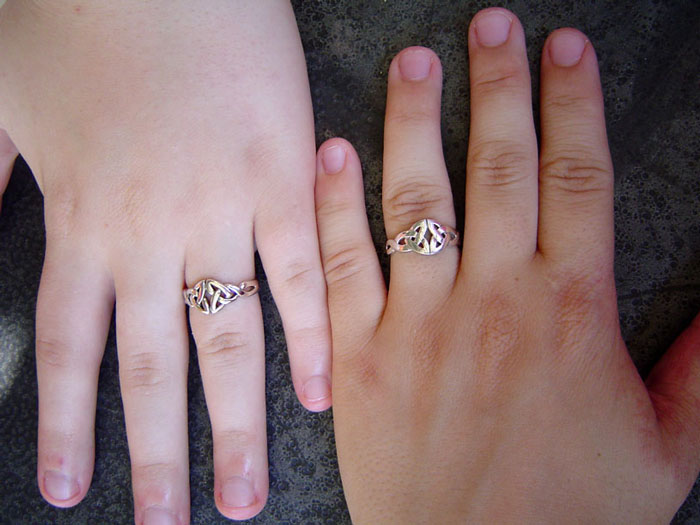 Until one day when OP found out about mom’s new boyfriend, 45-year-old Ben. All’s fine and dandy, but it turns out Ben’s often sending her nice stuff, like weekly flowers, cards, even jewelry, and taking her out to nice places. While OP is very happy for her mom, she can’t shake off the feeling of hypocrisy.

Well, it all culminated in OP getting matching rings from her beloved boyfriend and a subsequent comment from the mother about the whole “sugar baby” thing. But the universe was onto it and Ben’s flowers arrived, along with an invitation to a fancy restaurant, just in time for some immediate karmic justice.

Smiling, OP pointed out that they’re now both sugar babies. Mom’s flowery smile turned upside down. “It wasn’t funny, that was different,” she said. When OP left with her boyfriend, she got a text from her mom saying the two of them will have to have a talk, elaborating that OP will have to apologize because “it’s not the same.”

The AITA community ruled that OP, the daughter, was not wrong in being snarky and calling out her mother’s hypocrisy 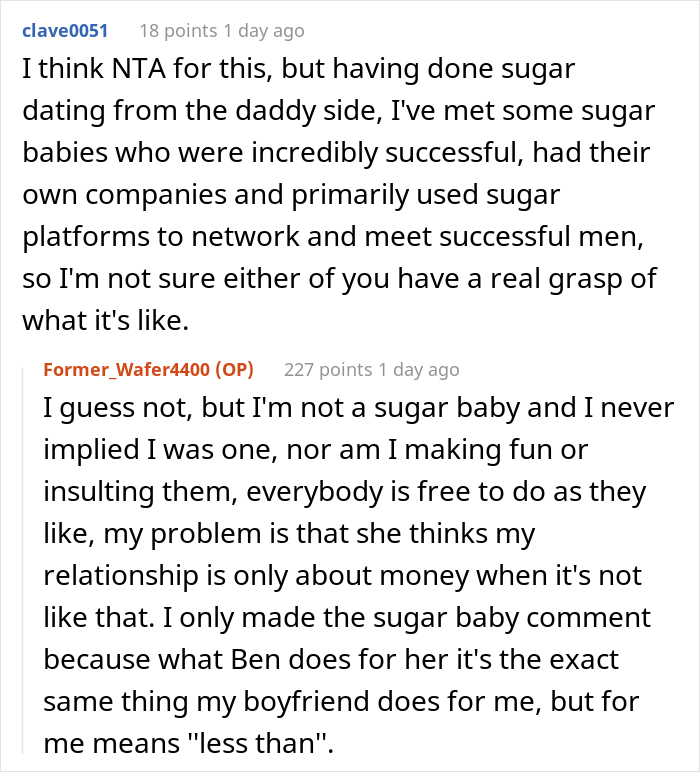 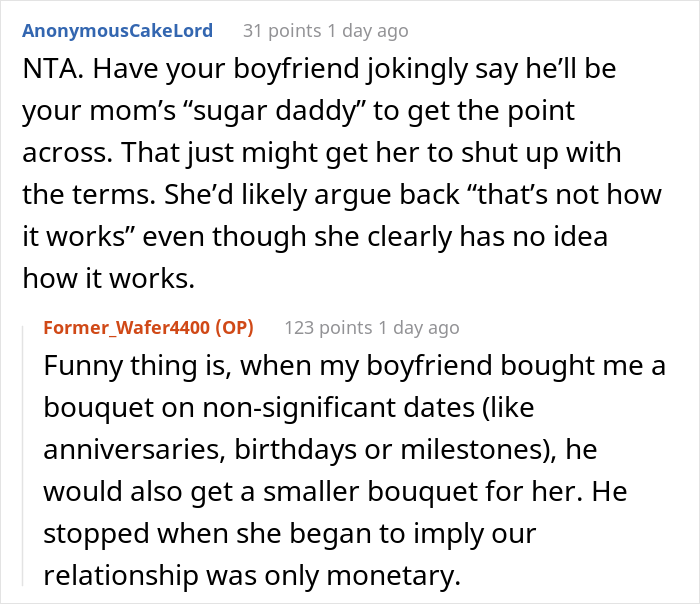 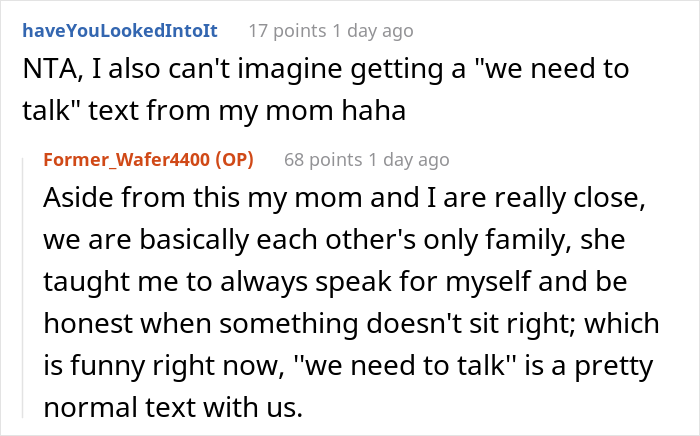 But the AITA community was having none of it. The top comment gave an explanation on why it’s not the same: “You’re right, it’s not the same. I was just trying to make a point. You, on the other hand, have repeatedly disrespected my boyfriend and my relationship, and I’m still waiting for my apology.” Needless to say, that was an NTA ruling. 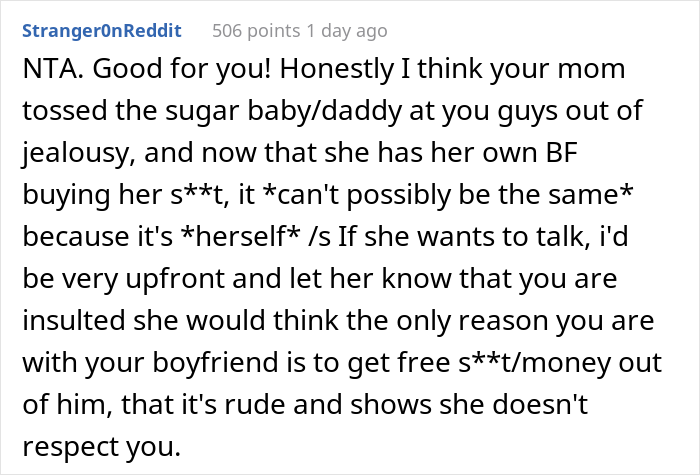 But in all seriousness, folks said that what she did was very much the same—just that she did not want to admit it. Some speculated that it might have been out of jealousy, while others pointed their fingers at competitiveness. Whatever the case, many suggested going ahead with the talk and hearing her out.

Some have given her the benefit of the doubt, explaining that she does seem to be, at heart, looking out for what’s best for her daughter. She worked hard and she understands the dangers of this situation. It still didn’t stop people from giving the NTA treatment, but at least they saw the other side. 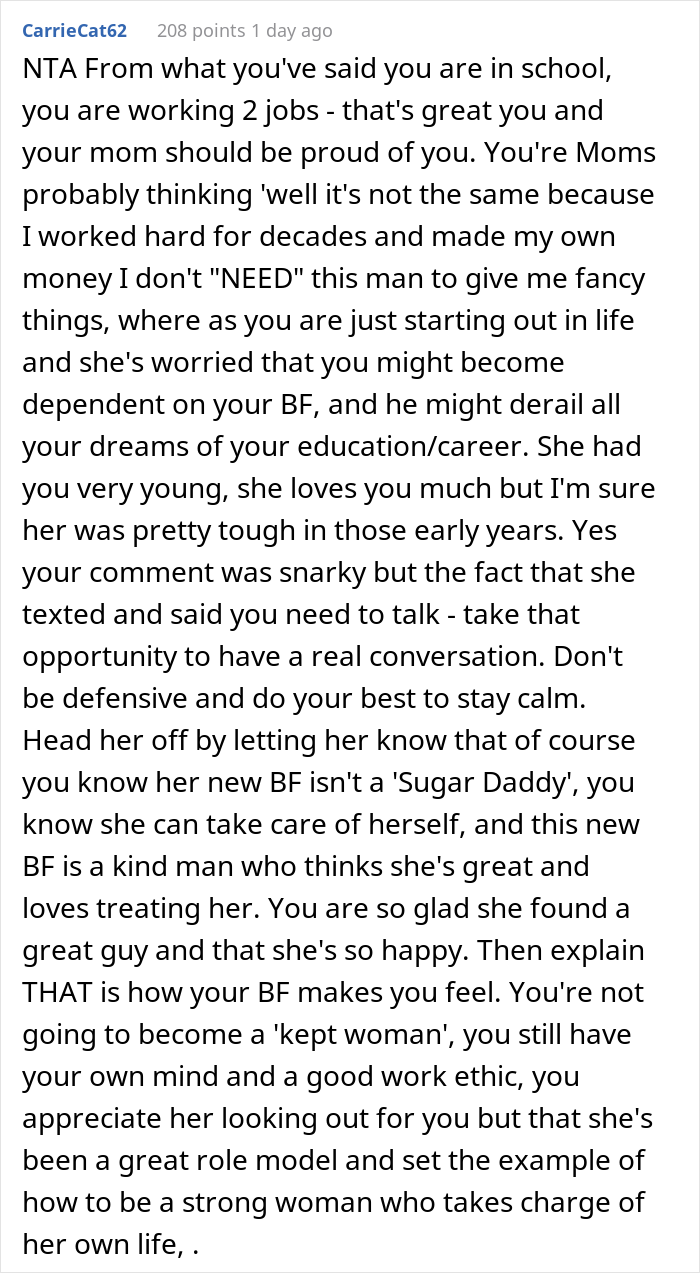 You can check out the post in context right here, or if you need more indirect conflict in your life, you can go for this, this or even this article to sate that appetite.

But before you go, tell us your thoughts on this whole situation in the comment section below!

The post “It’s Not The Same”: Mom Livid Daughter Called Her A “Sugar Baby” Despite Showing The Same Behaviors Herself first appeared on Bored Panda.