Respect your neighbors and, hopefully, they will return the gesture. Sounds pretty reasonable, right? Believe it or not, real life is a bit more complicated than that. People living in the same area often fall out for a variety of reasons, from arguments about late-night noise to disputes about parking etiquette. And the latter scenario stands right at the center of a story posted on the ‘Petty Revenge’ online group.

Nine days ago, Redditor xiinya opened up about an encounter with an entitled neighbor in the complex where she lives and the sweet payback that followed. The “male Karen,” as she called him in the post, decided to stir up some drama after the user briefly turned into one area in the underground garage to back her car into another. “[He] starts honking at me for being in ‘his spot’, telling me that ‘I can’t park there,’” she wrote.

Instead of letting his rude behavior pass without any consequences, the user had an epiphany while she was getting on the elevator. Below, you can read how the woman took matters into her own hands, as well as some of the reactions from the ‘Petty Revenge’ community. Then judge for yourself whether this little act of retaliation was the right choice, and be sure to share your thoughts with us in the comments!

Recently, one resident encountered an entitled “male Karen” in their underground garage who yelled at her for parking in “his spot” 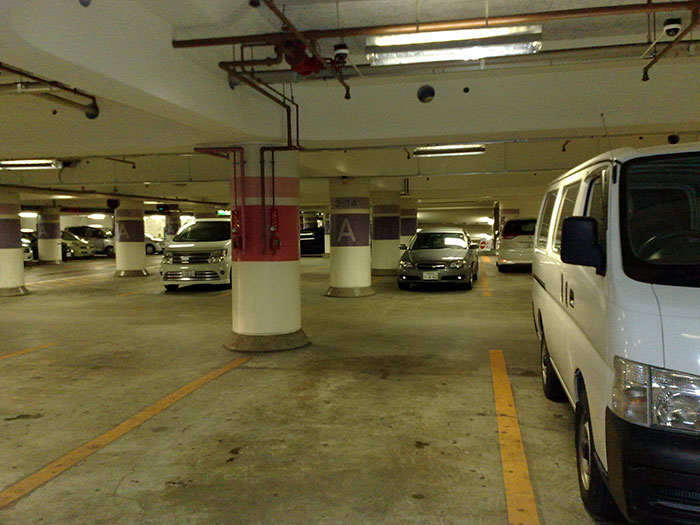 Instead of ignoring his rude behavior, she decided to pull off a petty act of revenge 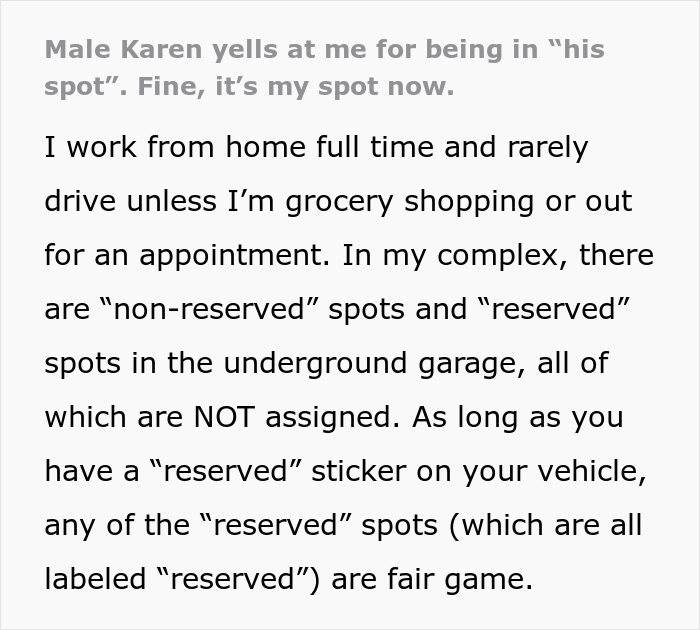 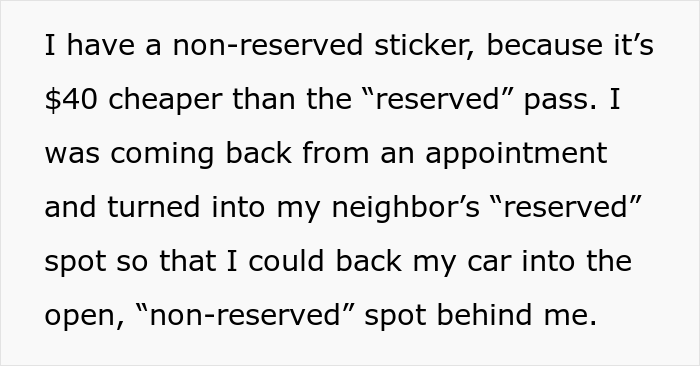 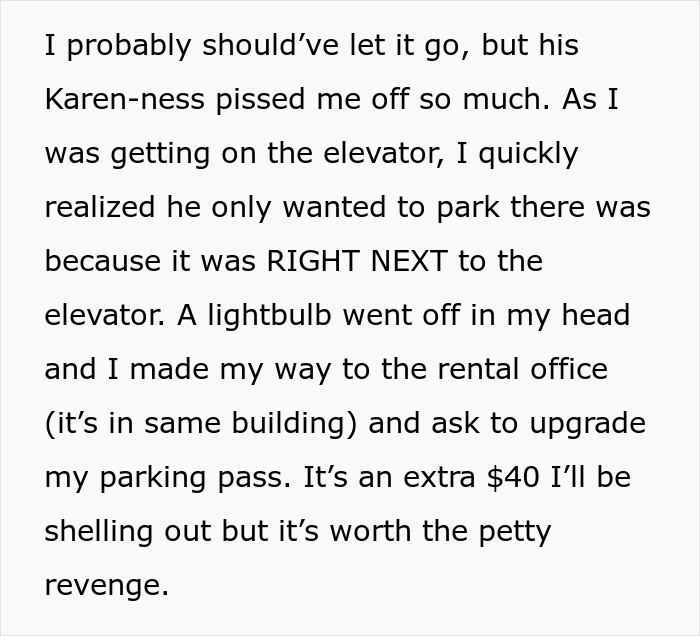 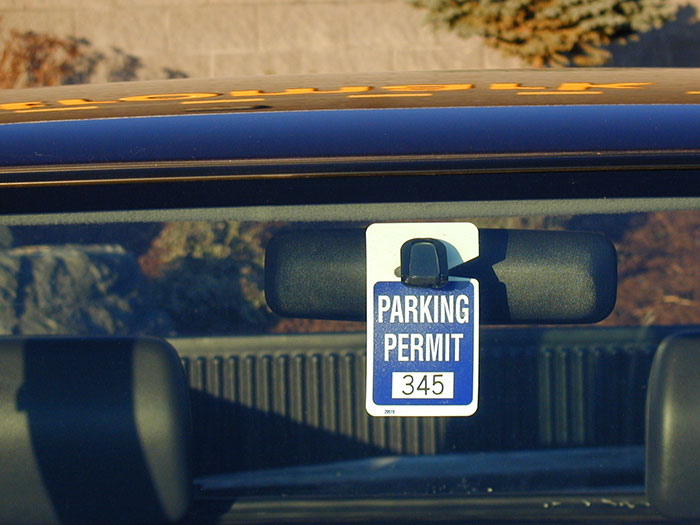 As the user xiinya experienced firsthand, we never get to pick the people living around us. All we can do is hope we’re surrounded by reasonable folks who won’t infringe on our right to enjoy peace and quiet. Or at least won’t make our lives more complicated than they already are. But being neighborly means something quite different for everyone: some people want to create long-lasting friendships, others prefer to keep their lifestyle to themselves, and there’s a whole other category of people who set out to behave in the rudest and most annoying ways.

Interestingly, a study funded by Homes.com called “Do Americans Love Their Neighbors?” showed that apparently, they do not. The friendly neighborhood concept that seems to be engraved in our minds is becoming a thing of the past. Only 18% of the US citizens surveyed revealed they had spoken to their neighbors that day, and a tenth said they never even had a real conversation with the person living next door to them. Moreover, there’s a generational gap with younger people being less likely to strike up close relationships with their neighbors.

When it comes to arguments, one out of ten participants revealed they were bickering over parking spaces with people next door at some point in their lives, making parking the second biggest problem between neighbors. While most people (18%) find themselves in conflicts regarding noise, other common complaints were about kids (9%), pets (9%), damage to their properties (7%), and arguments about property boundaries (7%).

So it looks like people living in close proximity to us can swiftly make our lives either more pleasant or challenging. And since fiery disputes can happen even in the calmest neighborhoods, we should become better at navigating them and finding healthy solutions to our problems. We previously reached out to a licensed clinical psychologist, Dr. Jesse Matthews, to learn more about coping with entitled neighbors and how best to react to their actions.

“We will all encounter people who want to take advantage of us or use us for some reason at some point in our life,” he told Bored Panda. “It’s important to notice these patterns of behavior and to act accordingly.”

He explained that arguments often arise because someone violates our ability to enjoy our lifestyle. “Typical conflicts relate to people making noise, say late at night, while neighbors are trying to sleep; one household keeping up with their house or lawn and neighbors not; or one household being social and having people over frequently and neighbors not liking it, either due to the noise, traffic on their street, and so on,” Dr. Matthews said.

“Beyond that, however, there are neighbors who are jealous of others, who don’t like people for various reasons, or some other things they are doing might bother them,” he continued. “It could be a matter of them not minding their own business, which we see a lot of these days with so many ‘Karen’ videos online.”

To find a way out of these neighborly arguments, we need to learn how to handle these situations as well as we can. “It’s important to be respectful of your neighbors so everyone can live peacefully, but you also need to distinguish between what are valid complaints and what is just someone not minding their own business.”

“If a conflict arises, you should always try to be tactful and respectful, trying your best to keep any problems to a minimum. But you may also need to be assertive and set or hold boundaries with neighbors. If you believe they are asking too much or concerning themselves with something they shouldn’t, don’t be afraid to let them know. And the more you can resolve conflicts on your own the better,” Dr. Matthews concluded.

Redditors appreciated the level of pettiness in the story, here’s what they had to say 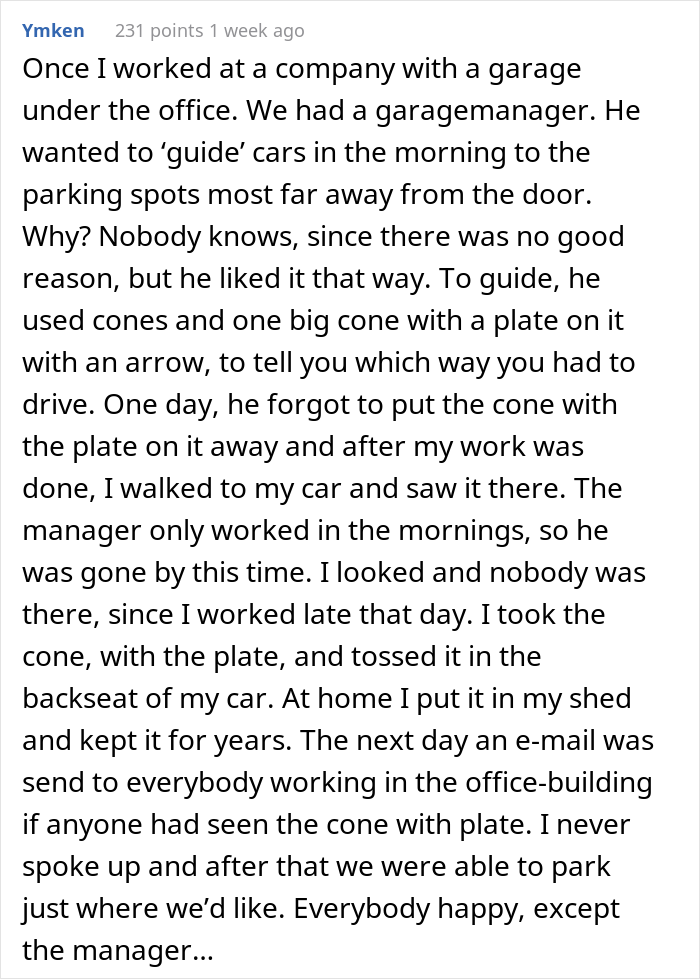 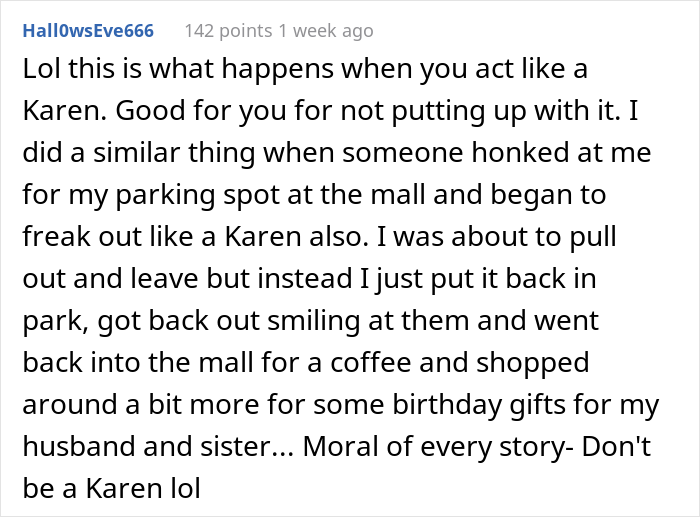 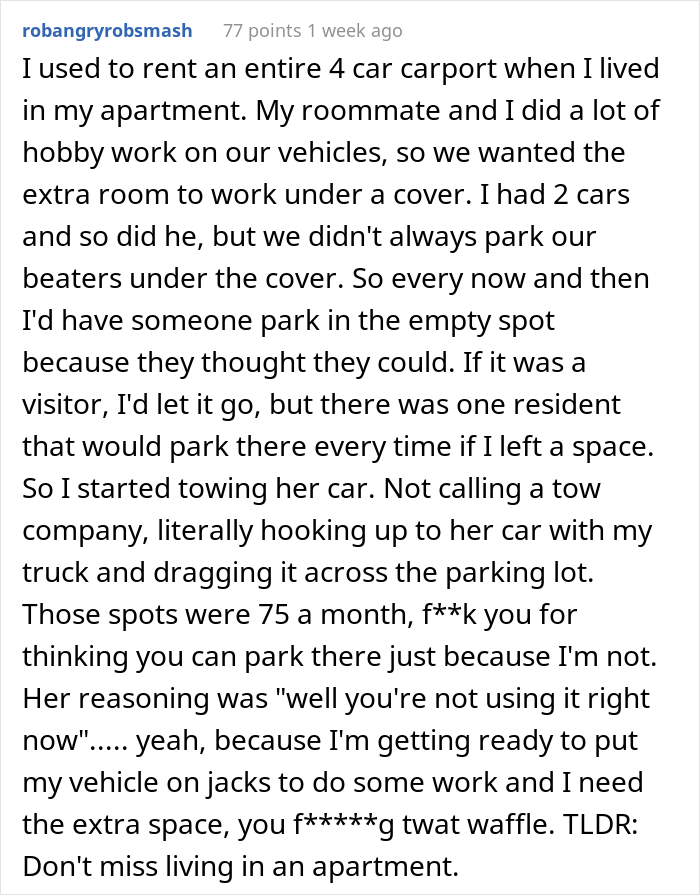 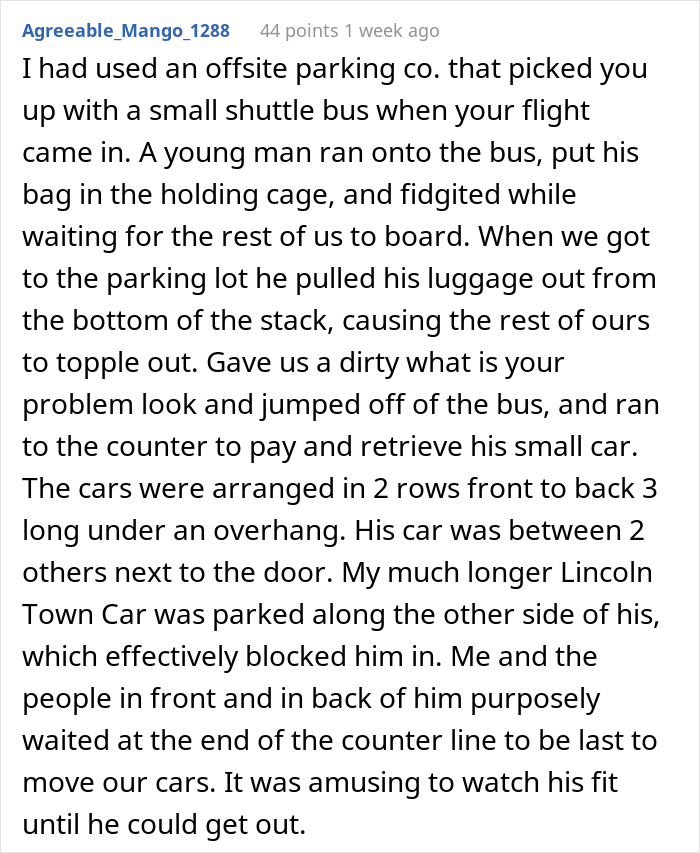 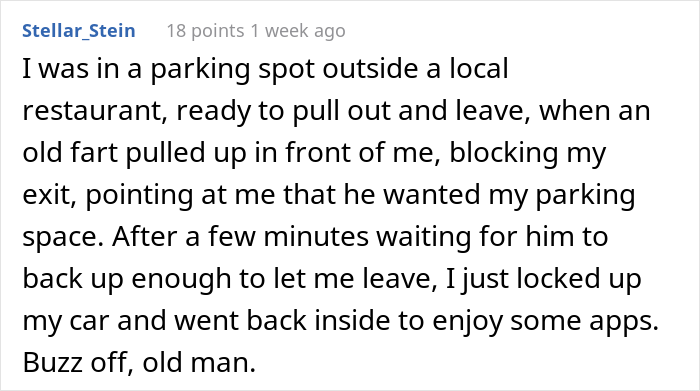 The post “It’s Worth The Petty Revenge”: Person Gets Back At Their Entitled Neighbor By Shelling Out An Extra To Take Away His Parking Spot first appeared on Bored Panda.

Woman Leaves Work To Go Home Because Of High Fever, Her Boss Bangs On Her Door And Calls The Cops