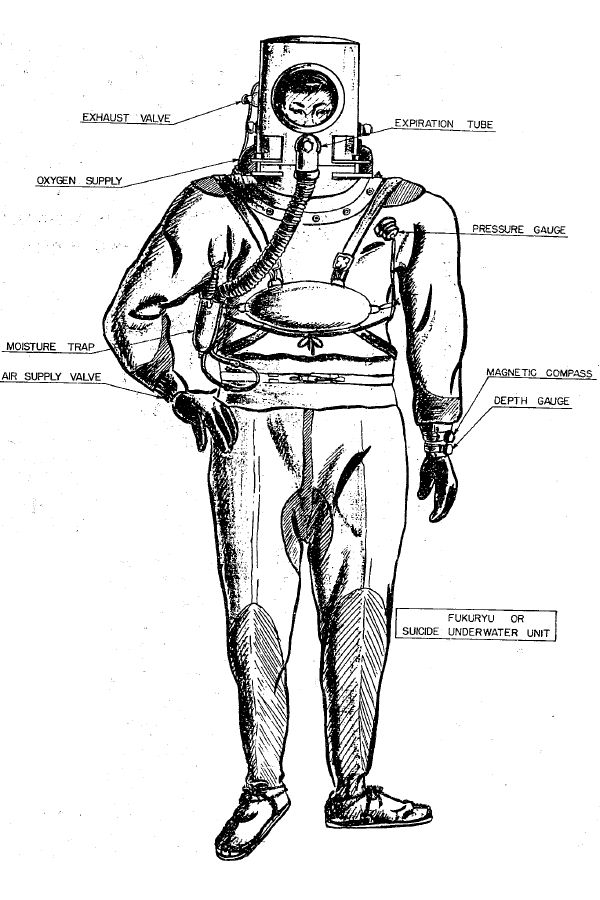 You are, no doubt, familiar with kamikaze, the Japanese pilots who flew explosive-laden planes directly into Allied warships in World War II. The suicide missions came about because the Japanese military was fairly desperate by 1944. But they weren’t limited to aircraft. Kamikaze missions also used trucks, motorboats, submarines, and even pedestrians. But the weirdest were the Fukuryu, or kamikaze frogmen.

The Fukuryu, or “crouching dragons,” were first conceived in late 1944 by Captain Kiichi Shintani at the Yokosuka Naval Base Anti-submarine School. With an American invasion expected within a year, Shintani feared that the Navy’s plan to use suicide torpedoes and motor boats to sink incoming landing craft would be inadequate given the critically low supply of men and materials needed to construct such craft. Instead, he proposed using an army of divers who would live underwater for weeks at the expected landing sites and emerge at night to attack incoming ships directly. While the Japanese Navy had used surface swimmers or Kaiyu to attack ships around the island of Peleliu, Shintani’s scheme would require far more sophisticated equipment and tactics. But as with the aerial Kamikaze, the doctrine of “one man – one ship” proved extremely attractive to the Japanese High Command, and in November 1944 feasibility studies and training began at Yokoska and Kawatana under the direction of Lieutenant Masayuki Sasano.

The Fukuryu were equipped with a specialized diving suit made of rubberized canvas with a steel helmet and a simple rebreather system. 3.5 litres of oxygen were stored in two tanks on the diver’s back, the carbon dioxide from their breath being scrubbed out by a canister of Sodium Hydroxide. With 9 kg of lead for ballast, the suit allowed a diver to walk along the ocean floor at a depth of around 5-7 metres for up to 8 hours, a special liquid food even being developed to sustain them underwater. In the lead-up to an invasion the Fukuryu would live in special underwater bunkers from which they could emerge undetected to attack enemy ships.

The reasons we never heard much about the Fukuryu are the same reasons that the Japanese military was desperate by 1944. Read about the suicide divers at Today I Found Out.