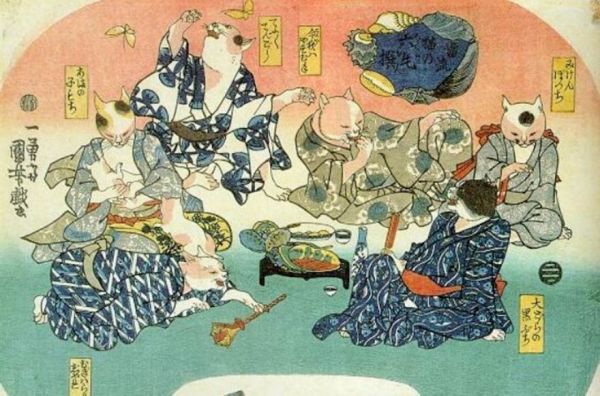 There’s no doubt that Japan, as a whole, loves cats. That’s where we see Hello Kitty, Maneki Neko, cat cafes, cat shrines, and young girls wearing cat ears without a special occasion. The earliest written account of a cat in Japan was from the Emperor Uda, who wrote about a gift of a cat in 889 CE, where he proclaims “I am convinced it is superior to all other cats.” But cats are also demons, shapeshifters, and tricksters, taking up lots of space in Japanese folklore.

Japan has long held a folk belief that when things live too long, they manifest magical powers. There are many old stories explaining why this is true of foxes, tanuki, snakes, and even chairs. However, cats seem to be somewhat unique in the myriad powers they can manifest—and their multitude of forms. Perhaps this is because they are not indigenous to Japan. Whereas Japanese society evolved alongside foxes and tanukis, cats possess that aura of coming from outside the known world. Combine that with cats’ natural mysterious nature, their ability to stretch to seemingly unnatural proportions, how they can walk without a sound, and their glowing eyes that change shape in the night, and it’s the perfect recipe for a magical animal.

The first known appearance of a supernatural cat in Japan arrived in the 12th century. According to reports, a massive, man-eating, two-tailed cat dubbed the nekomata stalked the woods of what is now the Nara prefecture. The former capital of Japan, Nara was surrounded by mountains and forests. Hunters and woodsman regularly entered these forests around the city for trade. They knew the common dangers; but this brute monster was far beyond what they expected to encounter. According to local newspapers of the time, several died in the jaws of the nekomata. Massive and powerful, they were more like two-tailed tigers than the pampered pets of Emperor Uda. In fact, the nekomata may have actually been a tiger. There’s speculation today that the nekomata legends sprang from an escaped tiger brought over from China, possibly as part of a menagerie, or it was some other animal ravaged by rabies.

Read a history of Japan’s magical folklore cats at Smithsonian.