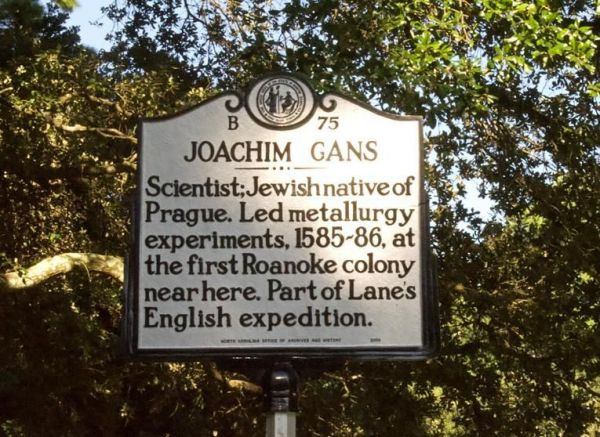 A new historical marker went up last month in eastern North Carolina, commemorating the first documented practicing Jewish person to set foot in North America. Joachim Gans arrived in the New World as part of the first Roanoke Colony, an experiment conceived and supported (although not well) by Sir Walter Raleigh.

How did a German-speaking Jew end up in the first English colony in the Americas? Gans grew up in 16th-century Prague, then the center of innovation in mining and metallurgy. England was still a relatively poor and backward European country, desperate for help in extracting copper and tin. Growing tensions with the Spanish Empire would soon would lead to war, and the English needed cannon to arm their merchant ships and navy. Jews had been banned since 1290, but a courtier of Elizabeth I secured Gans a kind of Tudor H-1B visa. Soon after, Sir Walter Raleigh sought a credible scientist to join England’s first venture to colonize the Americas on what is now the North Carolina coast. In Gans, Raleigh saw the perfect candidate for the specialized job of sourcing and analyzing metals.

Gans arrived on Roanoke Island in 1585, along with a motley crew of more than 100 men that included French, Portuguese, Belgian, Irish and Scottish men as well as English soldiers and merchants. The Prague Jew, who made no secret of his religious background, quickly constructed a state-of-the-art chemistry lab outfitted with Bavarian crucibles and a high-temperature furnace. He tested metals brought to him by local Algonquian-speaking tribes and tramped through the swamps in search of mineral deposits. Though he failed to find gold, , as Raleigh had hoped, there is evidence he isolated iron, silver, and copper in his experiments. That was promising news for an England eager to access metal deposits.

Gans returned to England with the other colonists in 1586, and was not part of the famous Lost Colony of Roanoke that arrived in 1587. However, there is a sad coda to his story that you’ll learn in an article about Joachim Gans (and historical markers) at Smithsonian.