Upon leaving school, not many people find themselves at a crossroads with career signs pointing to either priest, architect, stockbroker or furniture designer. But then again, John Makepeace doesn’t easily fall into a single category. I’ve gotten to know John over the past few months whilst helping craft one of his latest commissions, and what became clear is that he’s somewhat a combination of all these professions.

Forging his career as a furniture designer over the past 60 years, Makepeace has been fascinated with exploring structure and the science of material, much like an architect. He’s also collaborated on the construction innovative buildings. He’s been an entrepreneur, developing his business, designing production furniture before moving into one-of-a-kind commissioned work for clients around the world. He’s raised significant investment over the years and taken big risks—perhaps most notably in launching and running an innovative furniture making school in the mid 70s called Parnham. Plus, he’s almost as quiet as a church mouse. But when we sit down in his kitchen over a cup of tea to talk, although softly spoken, John remains much like his work: Deliberate, precise and often surprising:

You’ve been designing furniture for over half a century. What is it about chairs, tables and storage that continues to keep your creative fire burning after all these years? 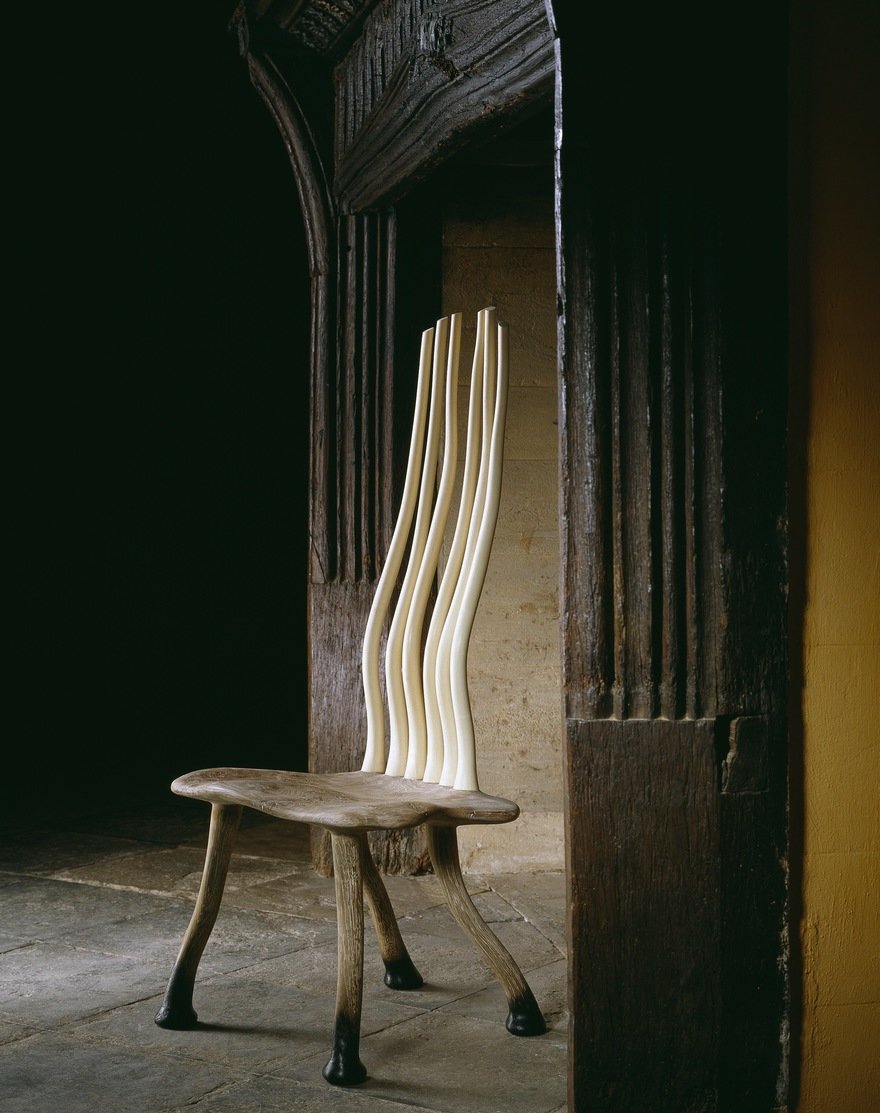 I think it’s partially the intimacy of our relationship with objects we use on a daily basis. And the fact that normally furniture is somewhat compromised, but the desire to try and produce something that’s free from that compromise is endlessly exciting. And I love the concept that furniture design uses all our capacity, from our physical ability for actually making, and the whole relationship of choosing a tree that’s standing in a woodland, to actually seeing that object being used. And then seeing it perhaps five, ten, twenty years later and seeing how that piece has blossomed in use. 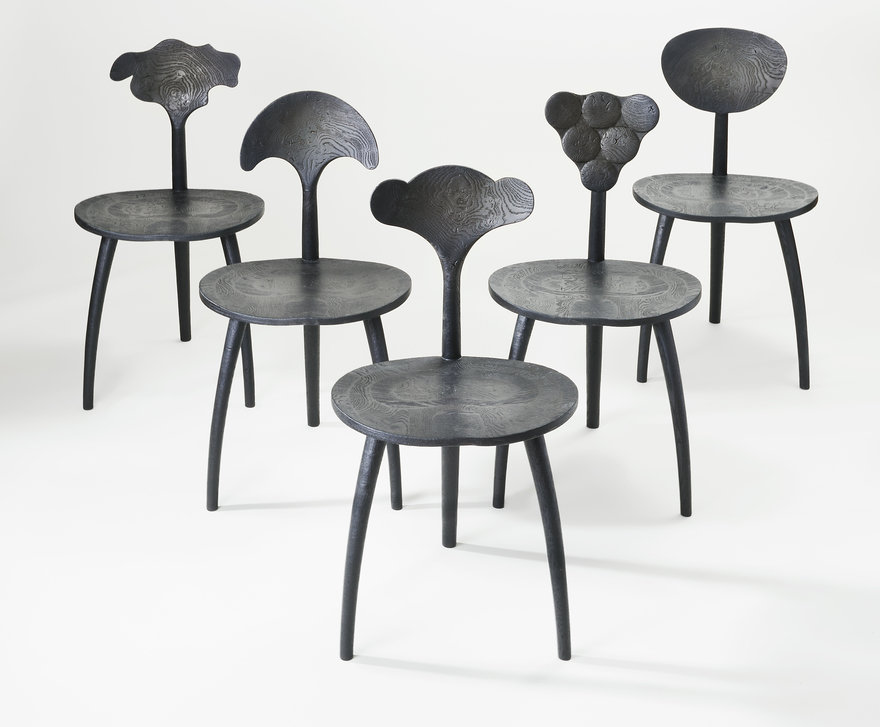 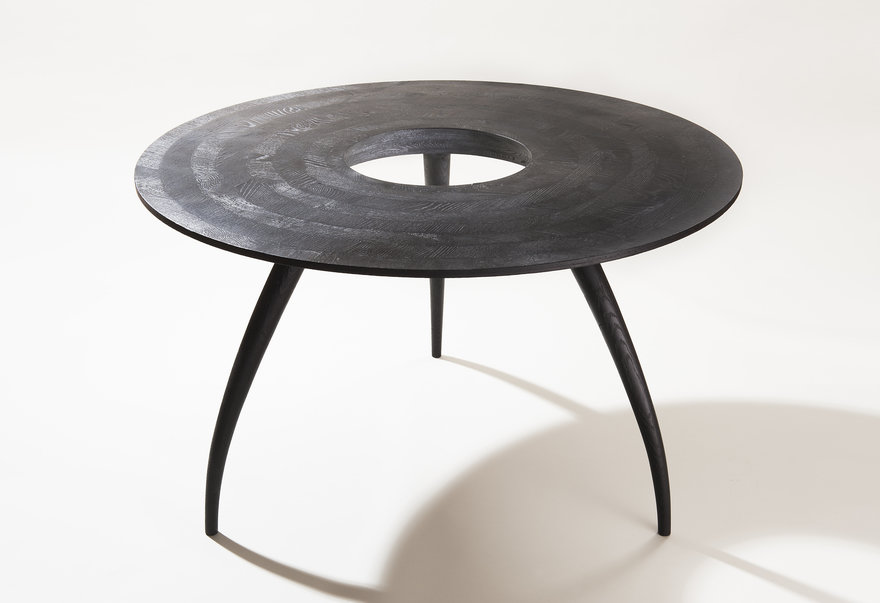 Where do you now look for inspiration?

To me the most exciting territory is the science that one needs to attach to the art. And access to the science is quite hard, because there’s so little research commissioned into wood as a structural material. It’s the specific nature of the properties of timber that need very focussed research.

So do you feel designers working today were armed with greater scientific understanding of the material properties and potential of wood, and could open up greater design opportunities as a result?

Yes it’s both their positive properties but also the negative properties. Timber is not terribly good at junctions. And we all know about the boring dovetails and mortices and tenons, and I avoid them like the plague because they are so dated. But actually there are whole new ways of doing it, and so we laminate and we make connections with steel, and resin, and all sorts of things that free us from that linear nature of timber that can actually be translated and transformed.

You only use native British hardwoods now. How did you arrive at that decision?

When I started out I wanted to use the most luxurious materials I could find. And as I came to know a little more about forestry it dawned on me really that one should be using material from our own environment rather than bringing timber from the four corners of the Earth. And so if we want trees in the landscape, then the logic is that we give them a life beyond their own life. 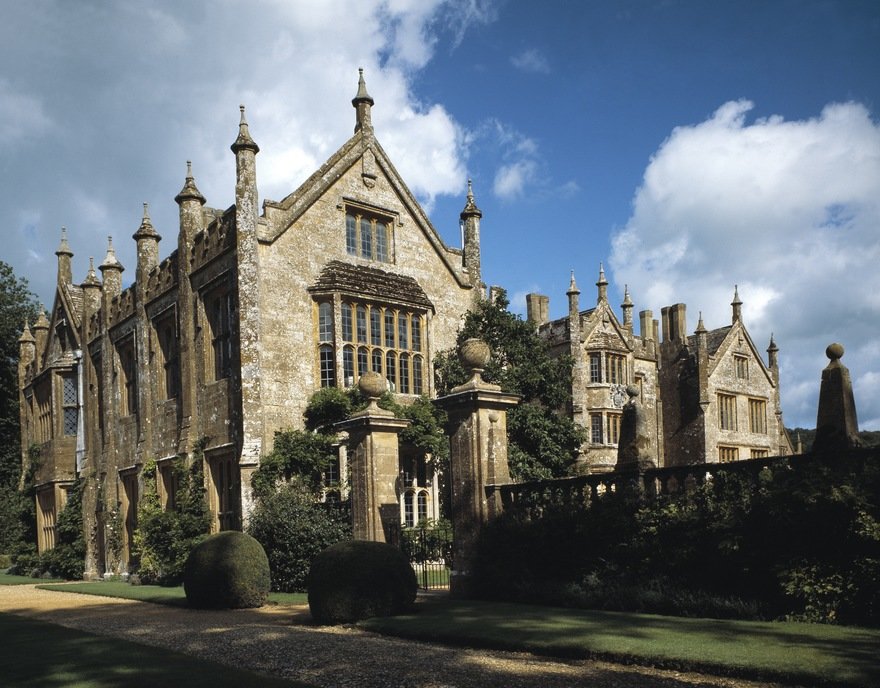 Parnham College (1977-2001) produced a raft of global design talent, including industrial designer Konstantin Grcic. It was an intensive 2-year course where students lived above the workshop and where they lived and breathed design, making and business. Are there any places out there like Parnham any more?

No, not really. I’ve had various people talk to me since Parnham saying they would like to do something, and none of them have done it yet.
I think what was extraordinary at Parnham was that having announced the course, there was an immediate response by professional people who recognised the whole logic of that idea. So right from the start there was a very good quality of applications. 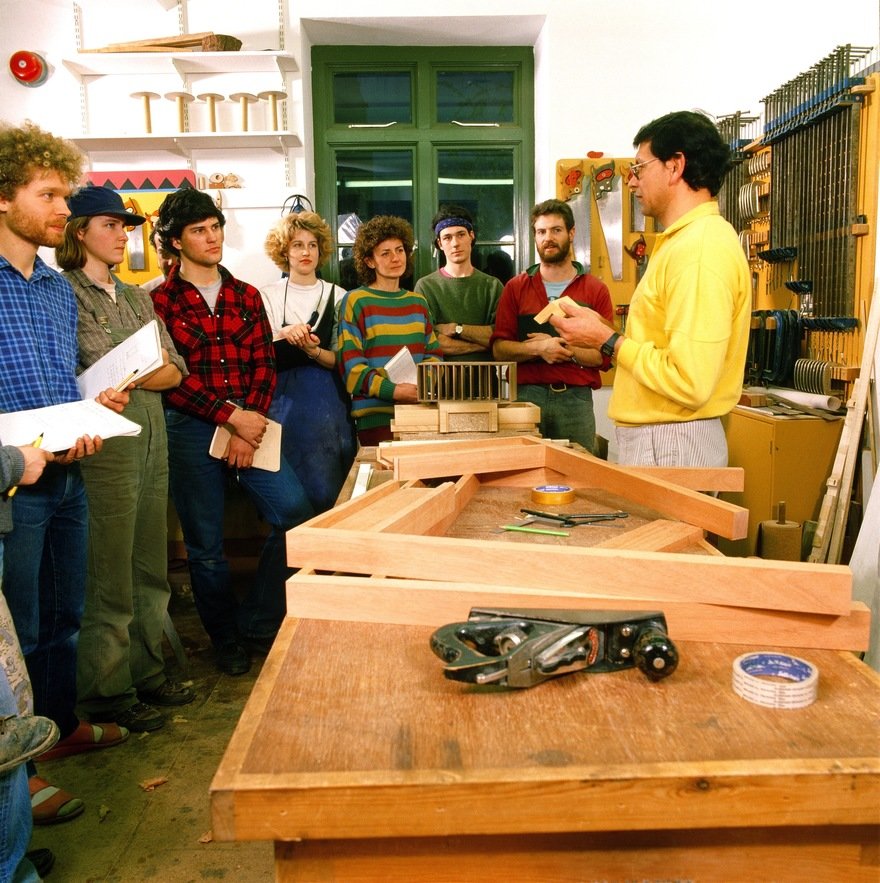 It seems to me education should be about opening up potential. Training to a large degree is about learning how to do something. And that to me seems to be a convergent approach. And what Parnham was attempting to do was blend the two of those, so that people were able to think more in the abstract than most makers.

But it came to a point, having done it for 25 years I was flagging a bit, because I was not only running the programme, I was running a business, and raising money which was probably the largest consumer of my time – in the first place to get Parnham off the ground and then subsequently to develop Hooke Park. And it was really time to hand over to somebody else, but unfortunately the person who took it on couldn’t hack it, so the trustees decided to amalgamate with the Architectural Association. 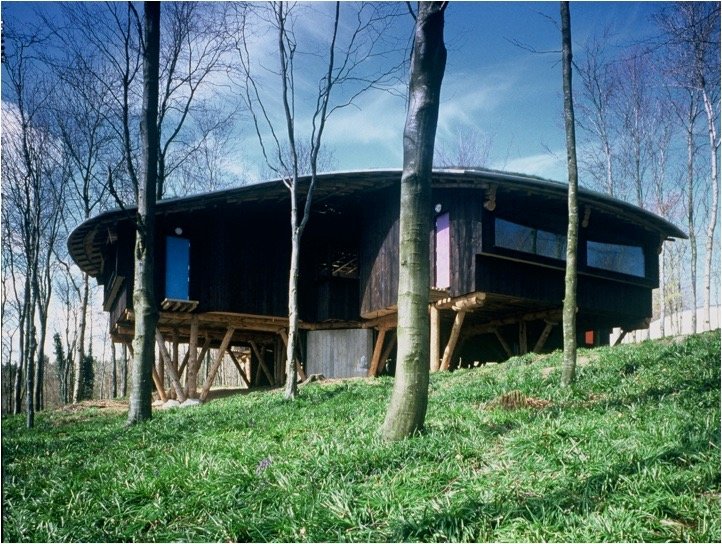 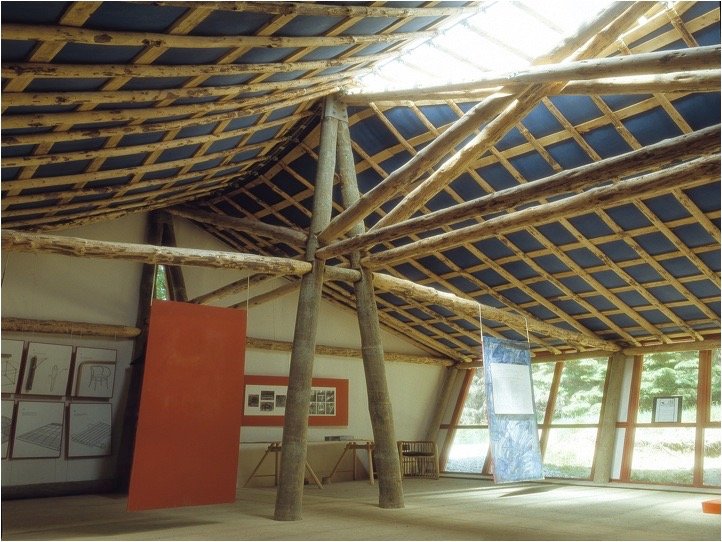 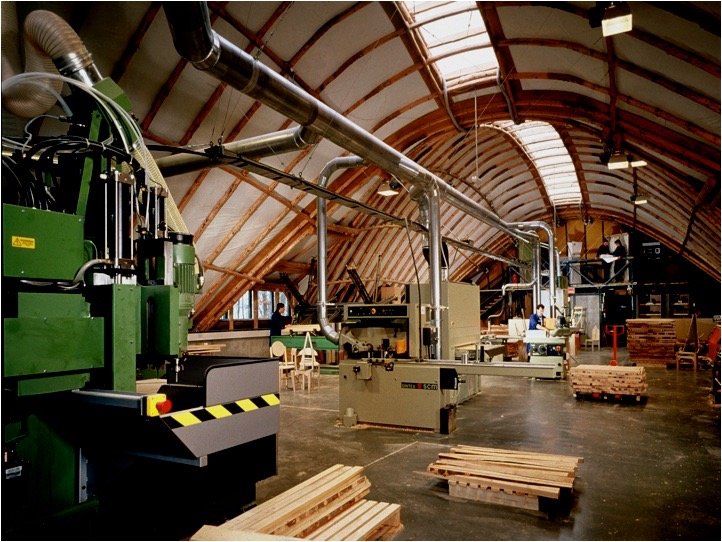 Can you tell me about Hooke Park and the Architectural Association?

It’s a 350 acre forest in Dorset, England, which as director of the trust we purchased with the view to establishing a new campus within the woodland. It’s now the practical base for the Architectural Association, a wonderful international school of architecture. And that was logical because we could bring so many good architects on the site. And so they were really excited by the whole idea that it could become a place for young architects, building new buildings.

In our age of ever advancing digital design tools and machines, what role and benefits are there to being taught and retaining fine hand-making skills? Will digital and mechanisation ever entirely rule the world of making?
What I see happening is there’s a kind of mythical notion of hand work being superior. And in psychology terms there is some benefit in people mastering a process, mastering tools and handling them, but I think it’s closer to a psychologists tool rather than necessity.

The very fact that we now design digitally, we can see things from three dimensions, that has fundamentally changed the way we think. Because we can do it, we do it. And for me that’s really wonderful to be able to create objects that are free within space, because we can move the material as we want to. In CAD, but also in the physical making, because we’re prepared to understand how we can bend timber in three dimensions and we can assemble things into patterns and whatever forms we want. That is quite different from anything that came before. And so my suspicion is that once we have a generation of people who are really capable in CAD they will become even more creative than we’ve ever been in the past. 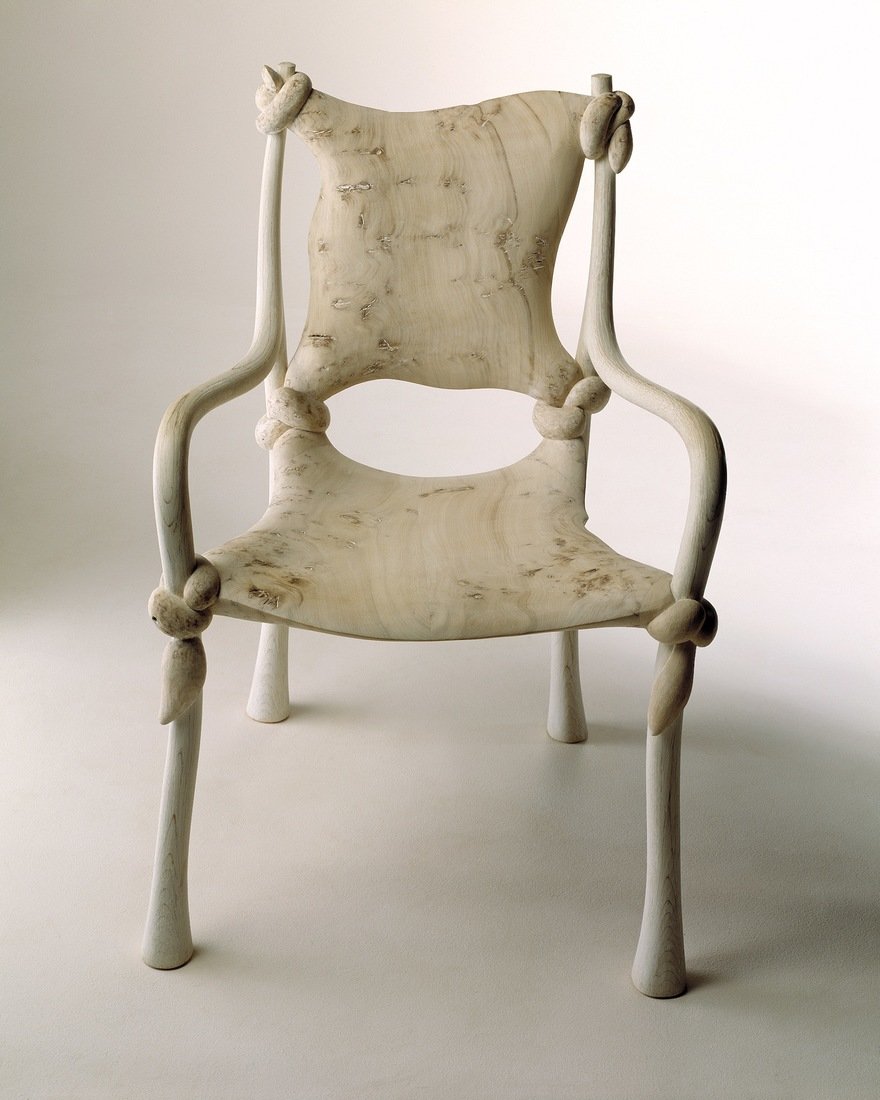 There have been some incredibly strong furniture design identities emerge from different parts of the world. Particularly when it comes to furniture. Take Japan, or the UK with its Windsor and Welsh stick chair tradition for example. But the most obvious being Scandinavia, or Danish design. What is it about Danish Design and the mid-century designers that continues to capture people’s imagination?

It takes a long time for a change to aesthetic to be accepted, so when Danish furniture was at its peak in the 50s and 60s it was quite novel. But of course what was very beautiful about it was that they learned from many cultures, and there is a very strong correlation between Danish furniture and Chinese traditions. So they were drawing on an aesthetic that was very solidly grounded, and they were prepared to go to more trouble than most manufacturers in the way they shaped components in a way that related to humanity. In the same way that the cabinet makers of China had done over previous centuries. And it certainly struck an international market, and it was substantial enough to reach out across the world. 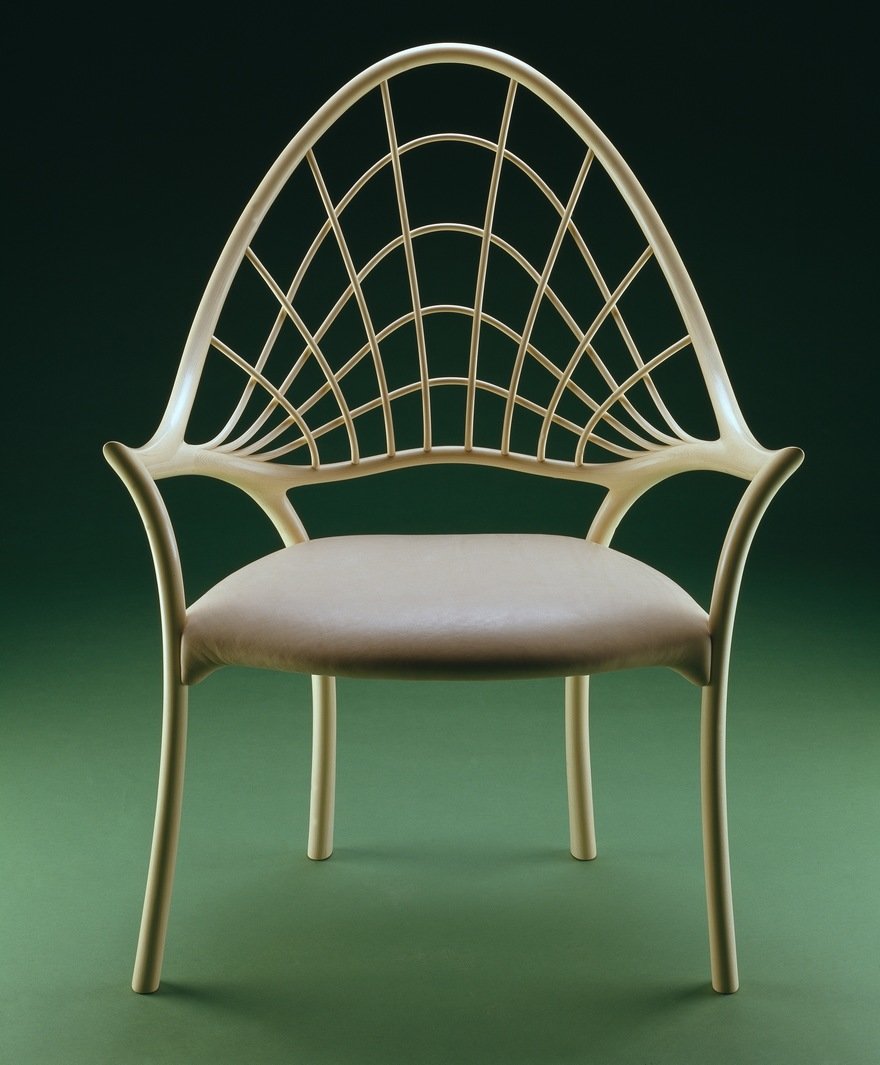 Do you have a particular movement of furniture that you’re drawn to? Or a country (other than Denmark) that you feel has produced some really interesting work of the past?

I do love some periods of Chinese furniture of the Ming Dynasty era. Their cabinets and particularly their tables, because I can see the way the makers were thinking about how to use the material better. Their chairs were beautiful but I think less acceptable in contemporary terms. 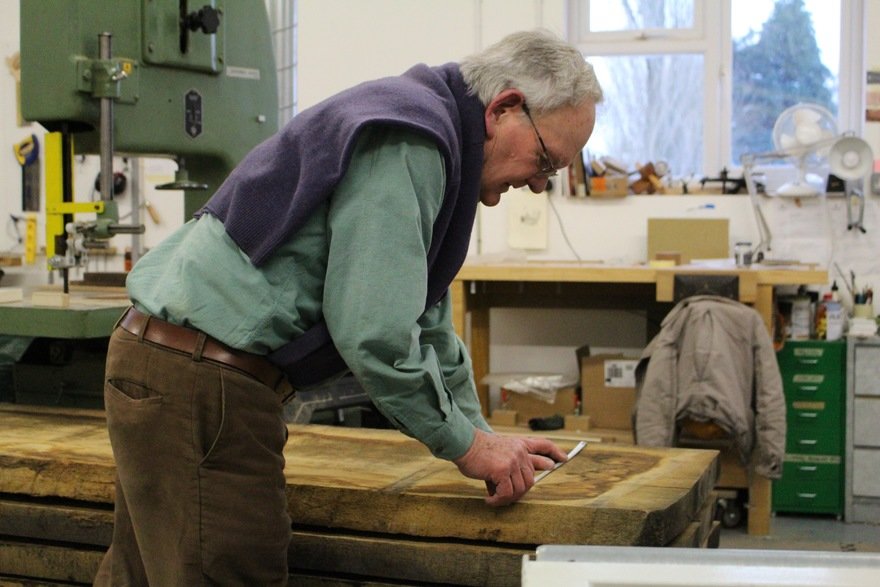 Who are the designers that have had the most impact on you, or who’s work you admire?

Thomas Hope [1769–1831]. That was really gutsy. Hugely bold items, which were inventive and seemed to have a sculptural quality that I admire. And then I suppose people like Eames. I mean I think we’re all probably disciples of Eames. I think their use of aluminum and that range of chairs they developed is hard to beat. I love the work of Joe Columbo. That was very inspirational. Very sculptural but mostly in synthetic materials.

In terms of buildings, I love the fact that the engineering in architecture is making itself apparent, and that would leap onto things like the Gherkin building in London.

And then people like Frank Gehry and his more sculptural forms. A lot of that innovation really evolved because the architects were talking to engineers and it’s that cross disciplinary point at which invention often occurs. People working in a single discipline often seem to be constrained by it, and the second discipline is what provides the release.

Is there a chair that you look at and think, “I wish I’d designed that”?

The Aluminium Chair by Eames would be one obviously.

Who do you think is the most exciting UK-based designer working today?

Thomas Heatherwick is amazing, but I guess that’s commonplace. He’s been doing some furniture. You might’ve come across an extending table, which was a beautiful piece of engineering. It moves from a circle to an ellipse, and it becomes slatted as an ellipse.

What will the furniture of the future look like?

Well there’s less of it. Our buildings are providing more and more of what we need, and of course it would make sense for builders to develop forms of housing that are more complete in terms of furniture being a part of it. There’s so much built-in furniture now, which means storage furniture is almost non existent.

I think soft furnishing seems to have a distinct place in people’s lives, which is likely to continue, although hopefully in more interesting forms. In terms of hard furniture, I think it’s going to be statement pieces. So in a building that is largely anonymous in terms of storage, people will actually want some items that are special. And they may well be more sculptural, and a lot of synthetics are going to enable a much greater sculptural quality within furniture. 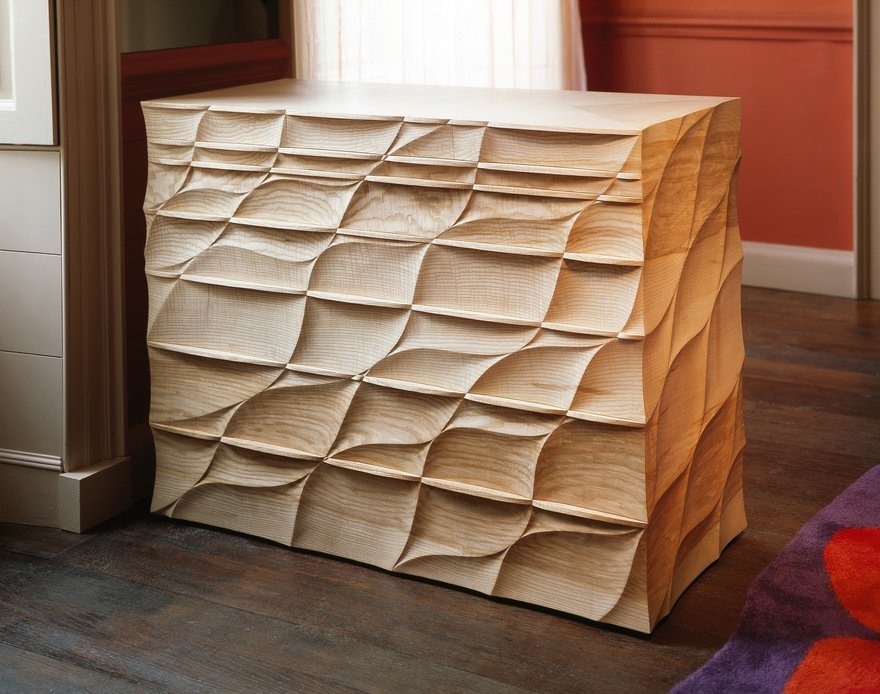 What do you think is the biggest challenge facing new designers in today’s world?

People seem to be less interested in objects than experiences. And that’s a big shift in the market. And so it’s relatively few people who are thinking in terms of having the very best. There’s often a kind of acceptance of good enough.
Design is a about communication. And a certain amount of communication that is run of the mill if fine, but actually in a world where there is more communication you do need to be able to shout and to stand out of line, because that’s actually a raison d’être for an individual. We don’t want to sublimate our identity, so to me it’s really important that there’s an integrity to yourself, whatever that might amount to.