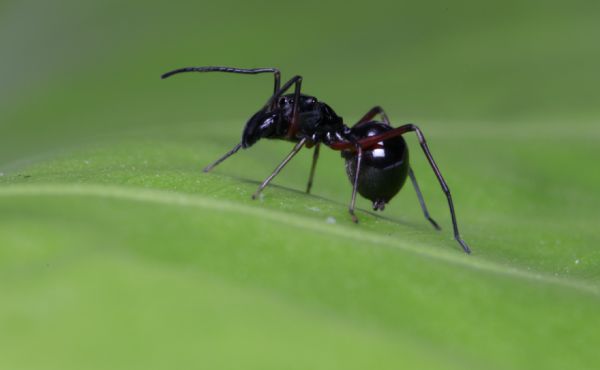 Spiders are not mammals. They’re not even vertebrates. Yet one species of jumping spider nurses its young with protein-rich secretions comparable to milk until they reach adulthood. Meet Toxeus magnus, a jumping spider that mimics the appearance of an ant, and which displays a suspiciously mammalian method of raising spiderlings.

Zhanqi Chen, a postdoc at the Chinese Academy of Sciences’s Center for Integrative Conservation, and his colleagues began to investigate parental behavior in T. magnus after noticing that the spiders’ breeding nests consisted of either several adults or a single adult female and her young—an observation that suggested that the mothers engaged in long-term care. Upon further investigation, the researchers made a puzzling finding: Baby spiders steadily grew bigger despite never leaving their nests, and their mothers did not appear to be bringing them any food.

There were several potential explanations for where the offsprings’ nutrition came from, Chen says, such as trophic eggs (unfertilized eggs stockpiled for food) or regurgitation (when a parent vomits up food they ate to feed its young). But the team’s observations led them to another, unexpected possibility. While recording data on the growing spiders’ body sizes one evening, Chen spotted some spiderlings attached to their mother’s body—it looked to him just like a mammal latching on to its mother’s breast. “I had many hypotheses, but this one was not included,” Chen tells The Scientist. “At that point, I was so excited, I couldn’t sleep.”

Analysis showed that the milk contains fat, sugar, and four times the protein of cow’s milk. One’s immediate thoughts go to the possibility of seeing spider milk in stores, next to the almond milk and goat’s milk. However, that would take a lot of spiders, and the world’s tiniest milking machines. Read more about the discovery at The Scientist. -via Metafilter