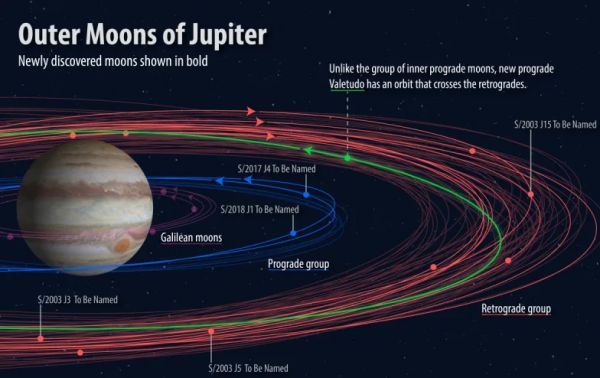 Jupiter has 79 moons that we know of. Twelve of them were just discovered in 2017. So the team who had the naming rights, led by Scott Sheppard from the Carnegie Institution for Science, put the task of naming five of them to an internet contest. You can imagine what they came up with. But this was no poll; they asked for suggestions, and there are rules.

“There are many rules when it comes to how we name moons,” explained Sheppard in a Carnegie Science press release. “Most notably, Jovian naming conventions require its many moons to be named after characters from Greek and Roman mythology who were either descendants or consorts of Zeus, or Jupiter.”

Other restrictions included a maximum of 16 characters per name, and final letters had to correspond to the moon’s direction of orbit (i.e. moons in retrograde orbit must end with an “e” and moons in prograde must end with an “a.”). Proposed names could not include an offensive word in any language or culture, or commemorate living persons, among many other restrictions.

Still, Moony McMoonface was a very popular suggestion. The names that were selected in the end are Pandia, Ersa, Eirene, Philophrosyne, and Eupheme. Find out what each of those names mean at Gizmodo.