How hard is it to be a celebrity? Anyone will tell you that it’s not easy at all, because you actually lose any opportunity to live a normal life, just go shopping, walk the dog, or fill up the car without being recognized and having to sign autographs, take selfies together with fans and more.

There is a famous story about how, before the premiere of Friends’ pilot episode, the showrunners invited the six starring actors to Las Vegas so that they could enjoy anonymity one last time. A quarter of a century has passed since then, social networks and TikTok have appeared, and now everything has become even more complicated.

Just look at this story by user u/aitarudecelebrity in the AITA Reddit community, which has already gained 17.3K upvotes and nearly 5K different comments in less than a day. No, the author of the original post is not a celebrity tired of fan attention. The author is a fan herself, or, to be absolutely precise, a devoted fan’s mother. 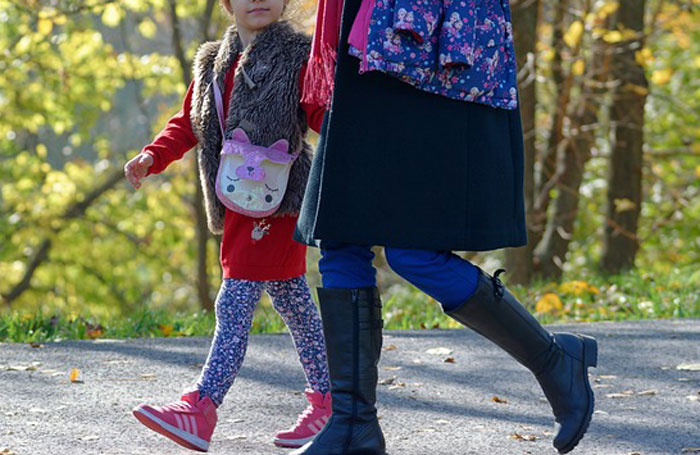 So, the Original Poster and her daughter were on vacation one day in an area where many rich and famous people show up frequently, and in the late afternoon, entering one store, they ran into a celebrity who, by coincidence, was the OP’s daughter’s real idol. 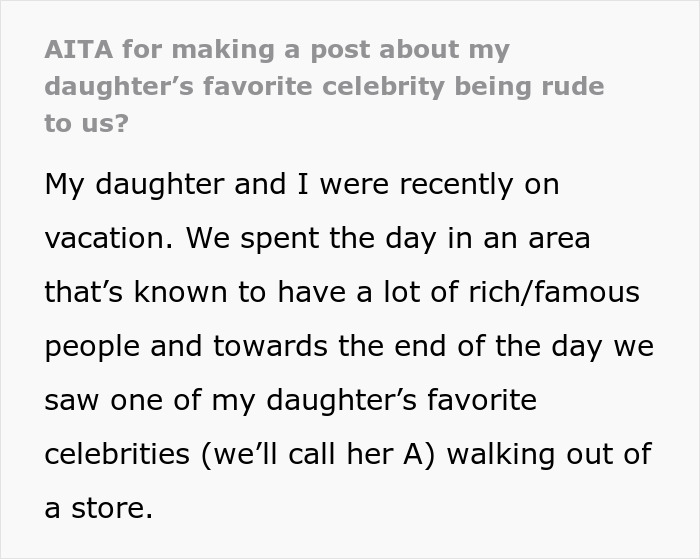 The daughter tried to take a joint picture, but was turned away by security as the celeb was busy with her own daughter’s birthday

Of course, it would have been a sin not to take advantage of this unique opportunity, and the daughter ran to the store to take a picture with the star. However, it wasn’t meant to be – the celeb’s security didn’t let anyone through, explaining that the star’s daughter had a birthday and mom just wanted to focus on it without being distracted by fans. 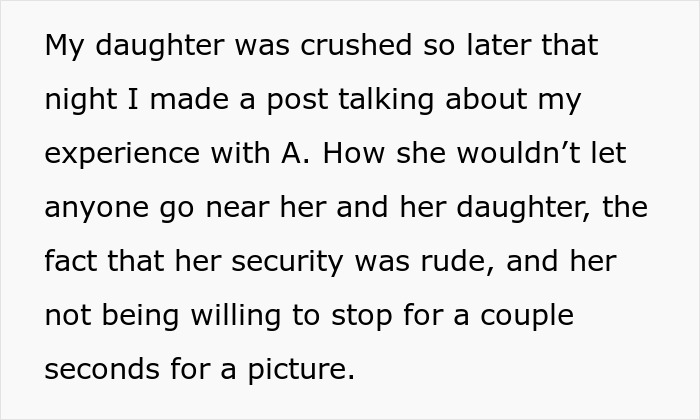 Of course, the OP’s daughter was upset, because she has long been a devoted fan of this star. She tried again to get through to her idol, but was turned away again. As a result, mother and daughter had to just leave, completely upset. We can all agree, such a chance comes up almost once in a lifetime – and it’s a shame to miss it through no fault of your own! 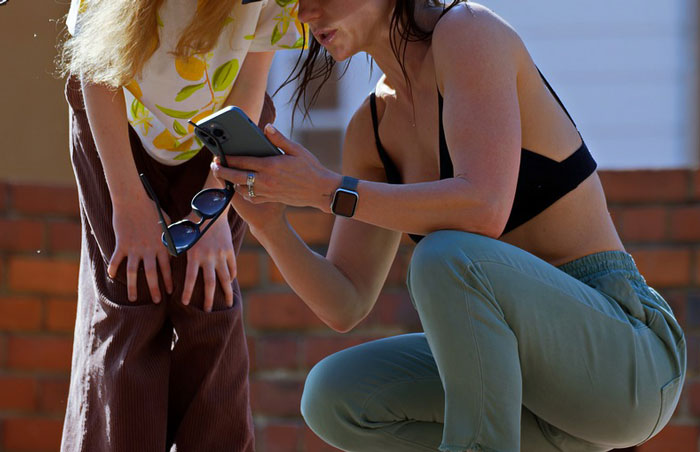 However, the story does not end there – you could even say it begins. And all because the OP, outraged that her daughter did not manage to break through to a celeb, could not find anything better than to write an angry post on social networks that very evening, criticizing her daughter’s idol herself for not wanting to stop even for a couple of seconds for a joint photo, and her security, who was allegedly “too rude”.

According to the mother, of course, the daughter’s birthday is very important, but a 1-minute interaction with a fan, as the OP believes, isn’t going to ruin her day and if it does, “that girl needs to learn that the world doesn’t revolve around her”. In any case, according to the author of the post, the celebrity was simply obliged to take a picture with her devoted fan, because she wouldn’t be where she is without her fans. 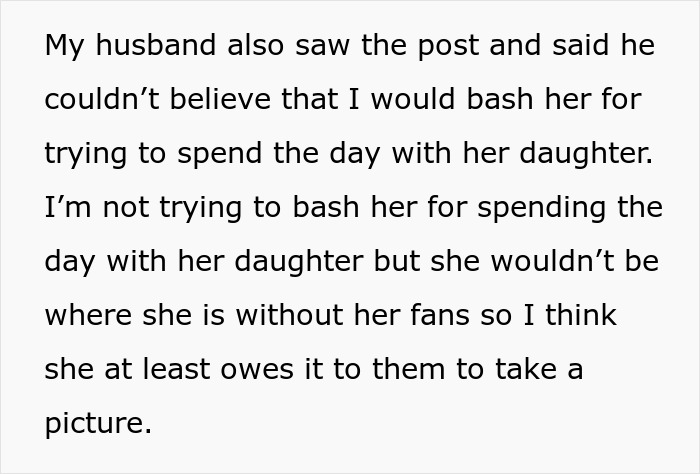 Be that as it may, the commenters criticized the mom herself heavily and even her own husband told her she crossed the line

However, the reaction to the post was not at all what the OP expected. Instead of showing sympathy and criticizing the “callous” celebrity, commenters started roasting the woman herself, calling her entitled for expecting the celeb to interrupt her daughter’s birthday for everyone that wants a picture. Moreover, even the OP’s husband told her that she was completely wrong to take it online and bash a celeb for just trying to behave like a good mom. 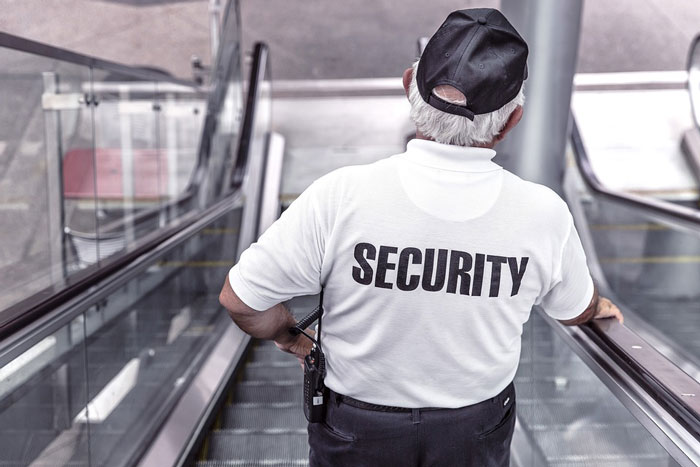 People in the comments roasted the mom as well, calling her entitled

If the author of the post expected any sympathy in the comments from the AITA community, then she did not receive it there either. People replied that they certainly understand her daughter’s disappointment, but famous people are still people. And if you give a minute to each fan who wants to take a picture or get an autograph, then you end up with another autograph session instead of time spent with your own child. 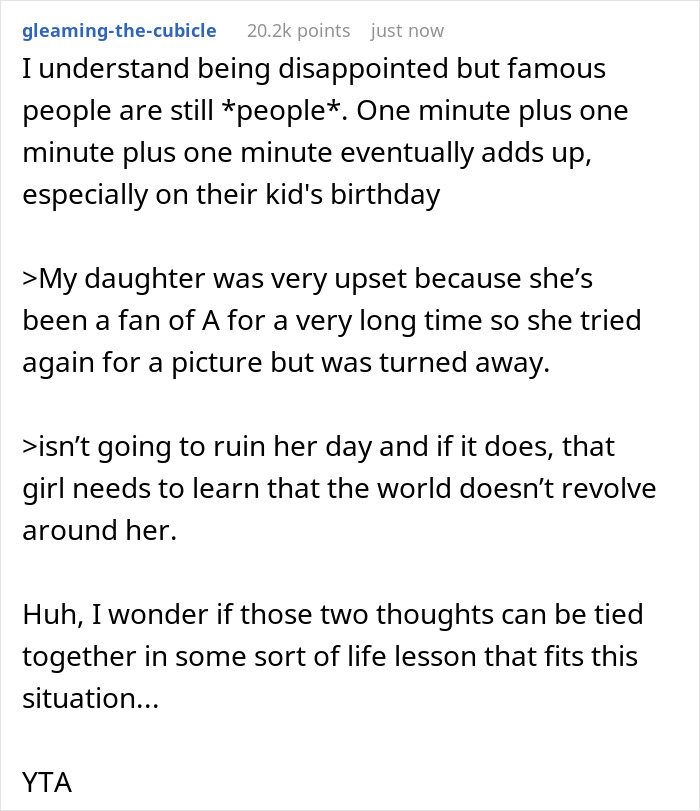 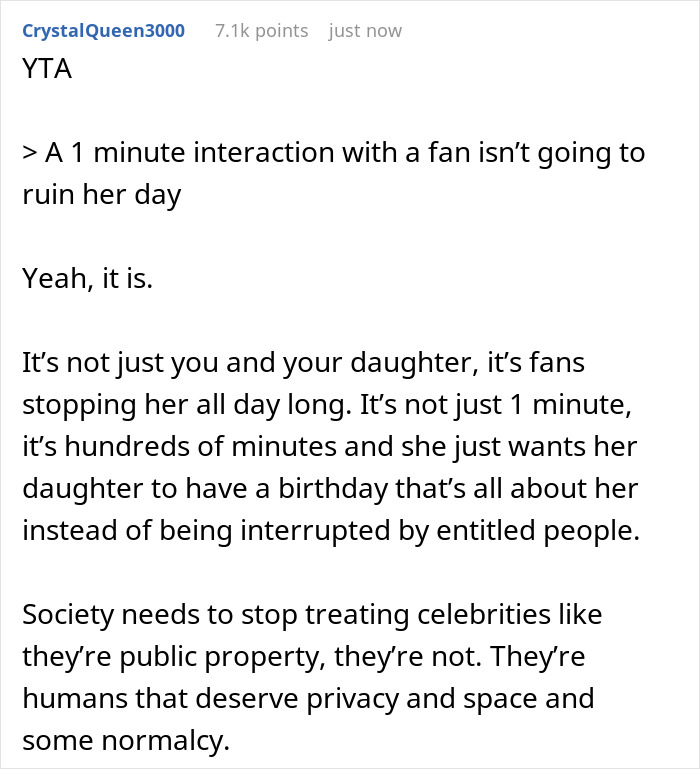 Moreover, the commenters were also outraged by the choice of phrases in which the OP expressed her indignation. If a celeb, as the author of the post writes, “needs to learn the whole world doesn’t revolve around her”, yet the OP expects her to stop celebrating her daughter’s birthday just so the author’s kid can get a photo – it might be the OP herself who needs to learn the same simple thing. 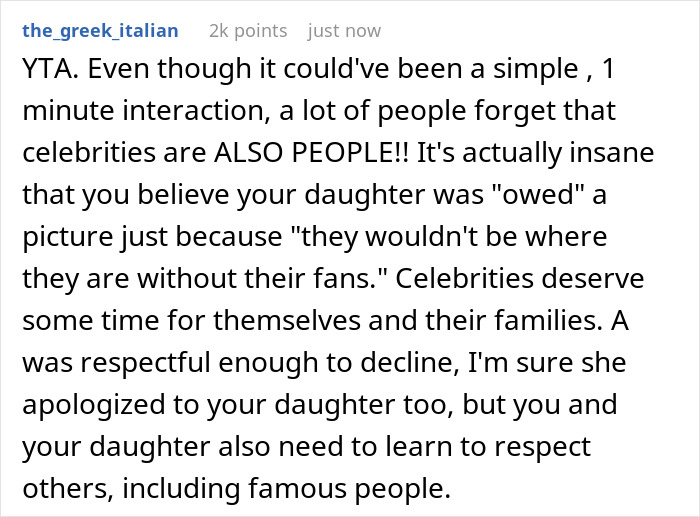 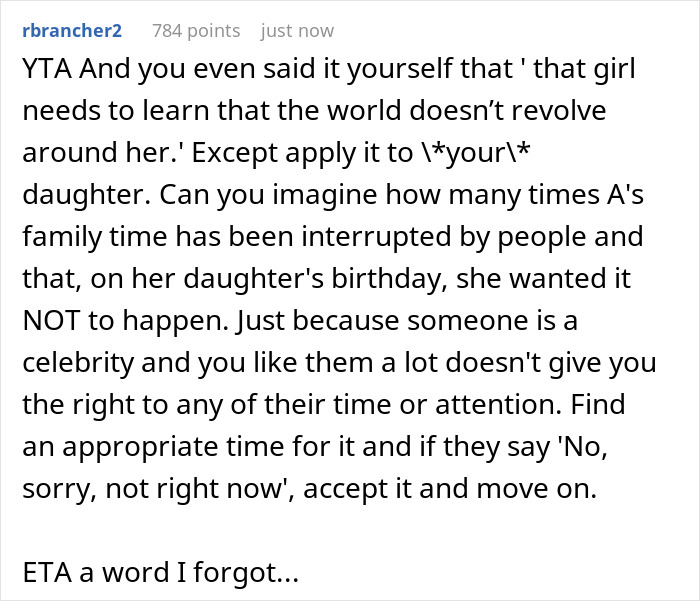 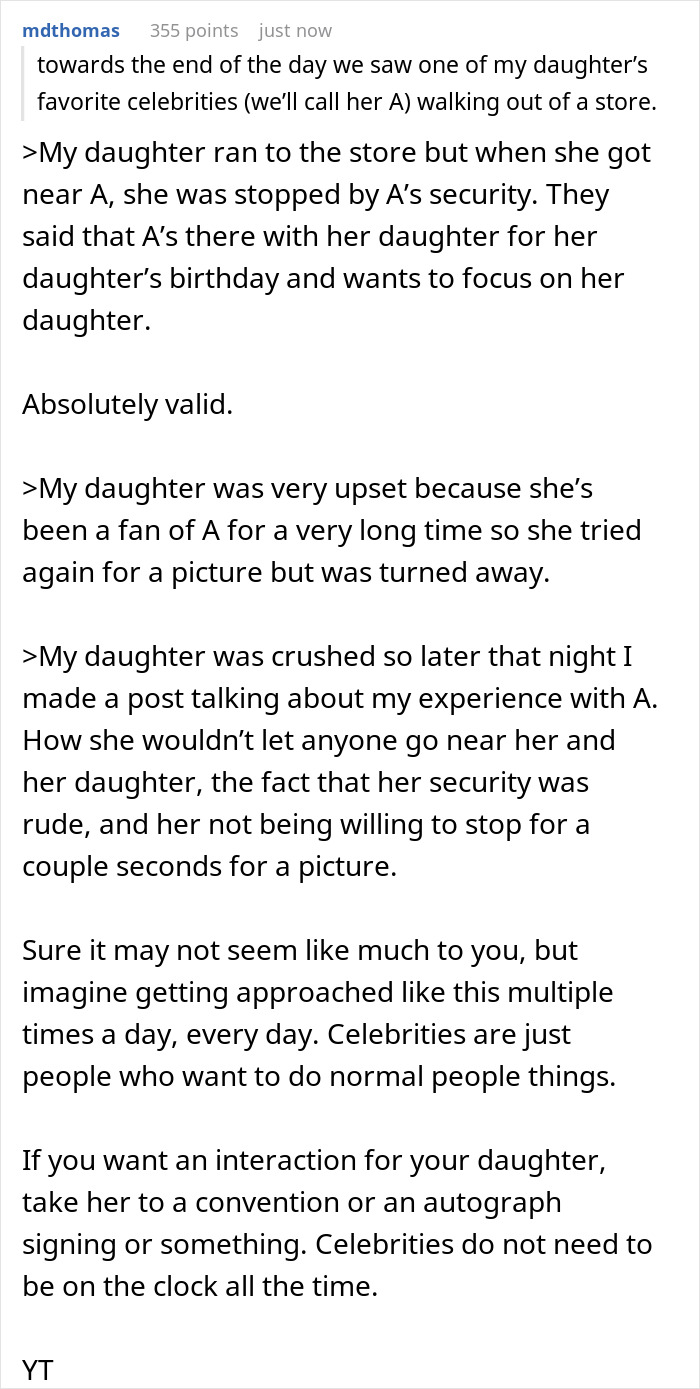 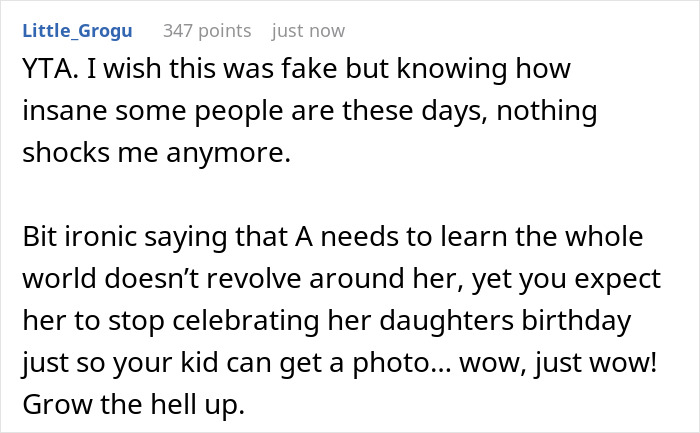 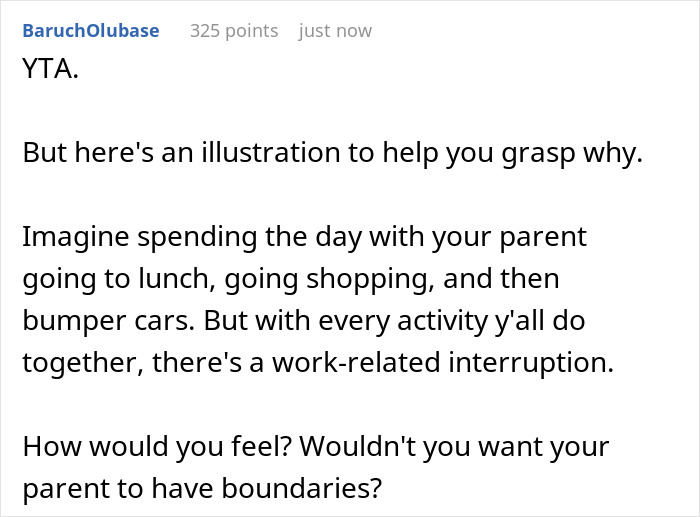 We suppose that you have already formed your own opinion about this particular story, so please feel free to leave your comments below this post. And if you too have ever interacted with celebrities, please let us know how it all actually was.

The post Karen Mom Gets Mad As A Famous Person Doesn’t Pay Attention To Her Daughter In A Store, Bashes Her On Social Media In Return first appeared on Bored Panda.