An upcoming design exhibition put together by Kenya Hara, Founder of the Hara Design Institute and President of the Nippon Design Center, is unusual for two reasons. One, blueprints of the designs on display will be available for download, so that DIY’ers can duplicate the objects. 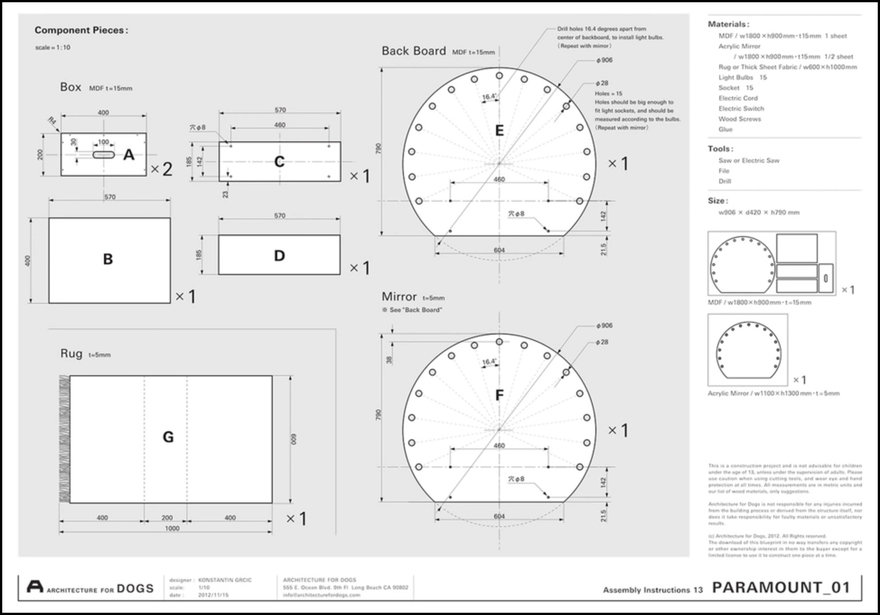 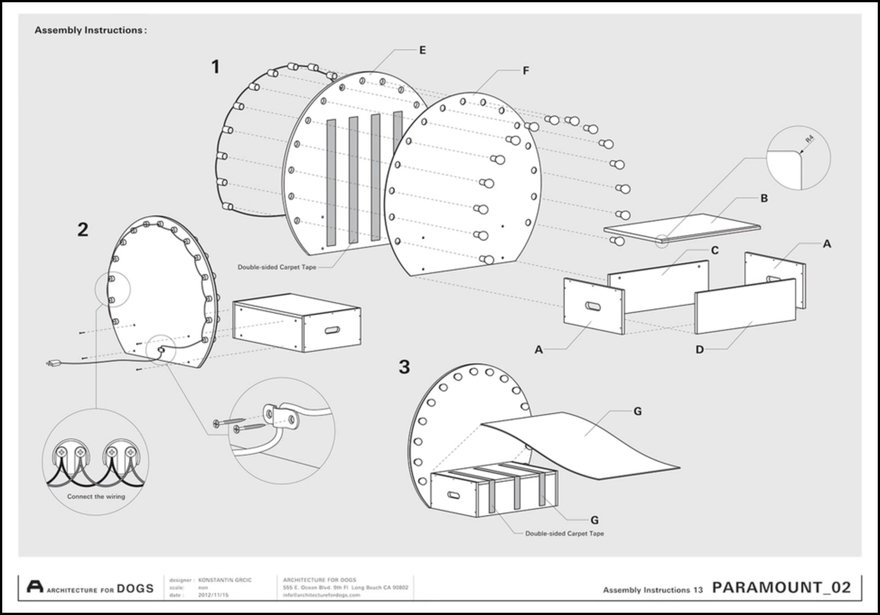 Two, the objects in question are essentially houses and furniture for dogs.

“Architecture for Dogs” features fifteen designs from the likes of Hara, Konstantin Grcic, Shigeru Ban, Ma Yansong, Sou Fujimoto and others. And while the snapshots of the designs may seem silly–and make no mistake, plenty of these are–I think you’ll find the descriptions interesting. Some examples:

by KENYA HARA for TEACUP POODLE 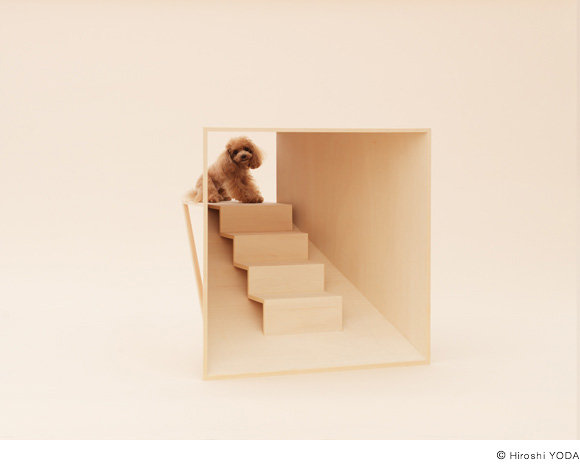 “When the dog runs up the stairs, he ends up at just the right height to be face-to-face with a person. I thought up a device/installation that equalizes human scale and dog scale, or in other words, a scale modifier. As an exhibition planner, I may be in my infancy, but I felt it necessary to take the initiative in representing the viewpoint of this project. With this product, my focus was a scale that achieves equilibrium.

“People have designed their environments to their own scale. For instance, each step of a stairway is 15cm high, around the world. This came to be naturally because of the height of humans and the length of their feet. The same goes for the heights of chairs and tables, the existence and size of doors, in fact, the size of houses and cities are predicated on the human body.

“Accordingly, dogs, who spend their lives at the side of humans, must accept human scale. This architecture is an apparatus for the purpose of naturally bringing dogs and humans eye to eye. As for those super-small dogs, who spend all their time looking up, definitely let them try it out!”

by KONSTANTIN GRCIC for TOY POODLE 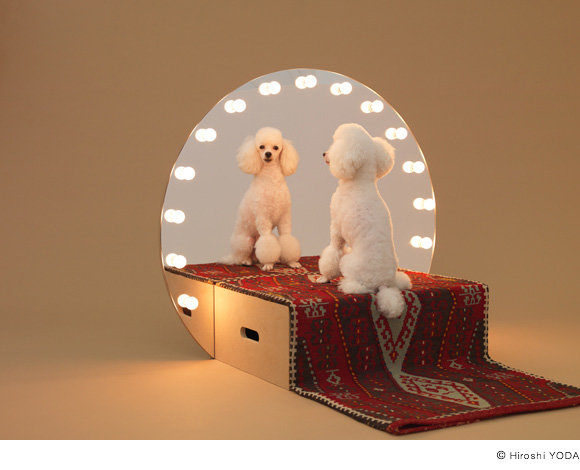 “I have recently come across an article about the so-called “Mirror Test”, which is used by neurologists to examine the self-awareness of animals based on whether or not they can recognize themselves in a mirror. Among the ‘lesser’ creatures the great apes, dolphins, elephants, and rats are the only ones confirmed to recognize the image in the mirror as themselves. Humans, out of interest, are only able to accomplish the test after they’re 18 months to 2 years old.

“Dogs have been ruled complete failures at self-awareness which can be explained by the simple fact that they are relying primarily on senses other than sight. Having said this, there is a group of poodle owners who are gathering in respective internet forums to debate their fervid disagreement with this assumption. They claim that their poodles are reacting positively to mirrors and displaying unmistakable signs of self-awareness.

“If this is true, it would perfectly underline two quality characteristics about poodles: that poodles are notoriously finicky about their looks, and that they are highly intelligent. According to the book “The Intelligence of Dogs” (by Stanley Coren) poodles are ranked among the top three in working and obedience intelligence, which refers to a dog’s ability to learn from humans, which leads to only one logical call: poodles for president!”

by ATELIER BOW-WOW for DACHSHUND SMOOT 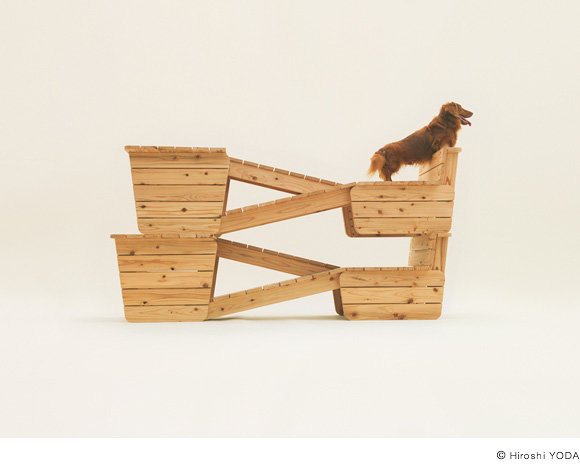 “How about something like a folded slope? This works. Let’s make it long enough so a person can lie down too. Sunbathing with your dachshund on the veranda is good. The area under the slope is like a burrow for small animals. They can train there, digging down there to catch their prey. If you connect several, they can go anywhere, and form any shape. Multiple stacks in an atrium space make a ramp for the dogs to go upstairs.”

by FGMF for YORKSHIRE TERRIER 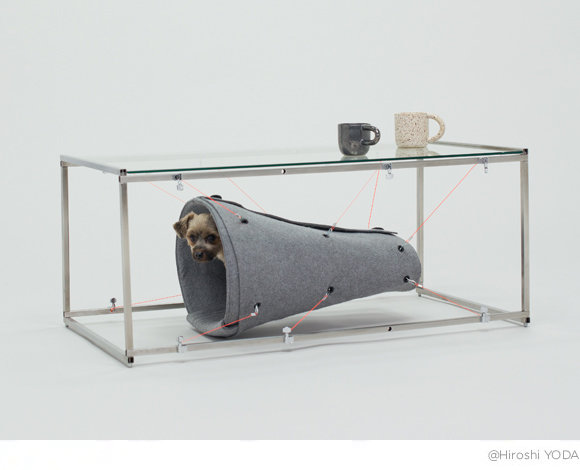 “THE COCOON is a soft and organic container within a hard and precise frame. It’s a dog’s hideout, but also a table for its human fellow. It’s a space, but also an object.

“Like many of the ‘architecture-for-humans’ we design, this Yorkshire Terrier house is formed mainly by voids and structures. We like to see it as more of a ‘home’ rather than a ‘house’. THE COCOON is a sort of nest suspended on a micro-environment: the thin frame provides a buffer between the cocoon and the human territory –just like a garden creates a transition space between the privacy of a house and the city around it.

“Suspended and embraced, the dog will feel safe and cozy at the same time. Laying a glass top on the frame transforms it into a table, thus merging the dog house and a human’s furniture into one single piece.

“THE COCOON is a laser-cut cardboard structure wrapped in cozy fabric. It can be made of felt, neoprene, knitting or any other fabric a dog would feel comfortable in. In warmer weather, the cocoon may also be used without any fabric envelope, just with its naked structure. The outer frame can be easily hand mounted from regular steel pipes. Additional guitar tuning pegs and steel strings will provide the right traction for the cocoon inside the frame, while lending a fun aspect to the rigid steel element. It can host one or two dogs in different layouts in the same frame.”

Overall I found the examples to be as ridiculous as they are engaging, as you’ve got star designers applying intellectual rigor to animals who find chewing on smelly socks a worthwhile activity. The designs on display also expose the touch of lunacy that fervent dog owners seem to be afflicted with. (If that sounds critical, I should note that my wife and I own six dogs, and that there were more dogs at our wedding than human beings.)

The exhibition will run–IRL, no less–from the 19th of this month thru January 10th, 2021, at Japan House London. You can also check it out virtually, right now, here.