Stealing is wrong, but it can take a while for that lesson to sink in with some kids. Years, in some cases! And sometimes, they might not even realize they’re being taught a lesson.

Redditor u/Pandalungs shared how his nephew ended up stealing around $300 dollars from his grandma (the OP’s mom) for Fortnite purchases. This happened over the span of a couple of years. The author of the post told the r/pettyrevenge subreddit that he decided to teach the child a lesson without even telling him about it. A lesson that is going to take a long, looong while.

Check out the full story below, dear Pandas. When you’re done reading it, we’d like to hear what you’d do in this situation. How would you react if you realized that your child or a young relative was stealing money from someone in the family? What do you think the right approach is?

Bored Panda has reached out to redditor u/Pandalungs with a few questions. We’ll update the article as soon as we hear back from him.

Some video games are built to entice players to spend a lot of money on battle passes, ‘skins,’ and other stuff 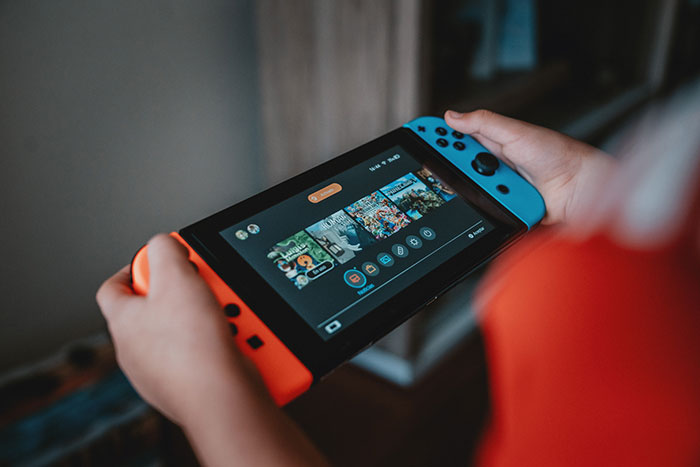 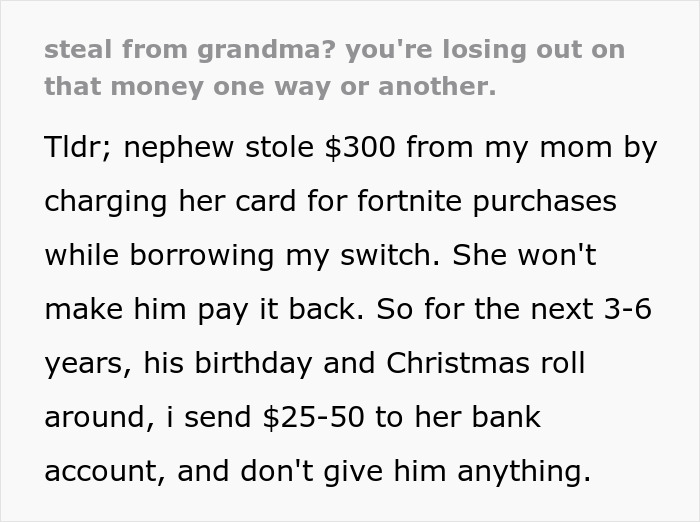 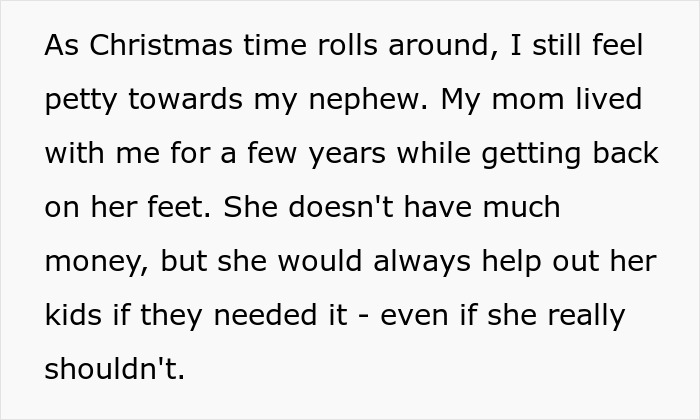 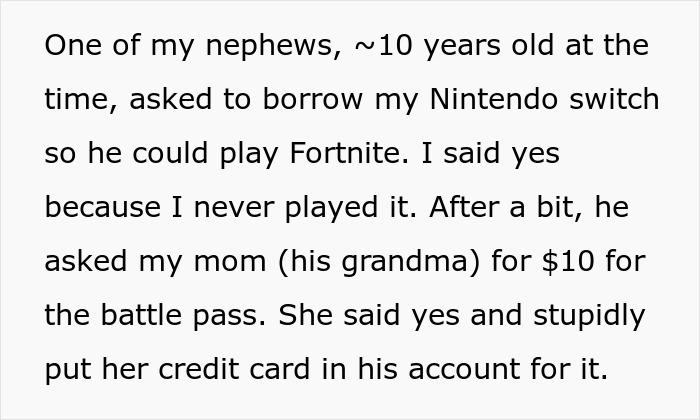 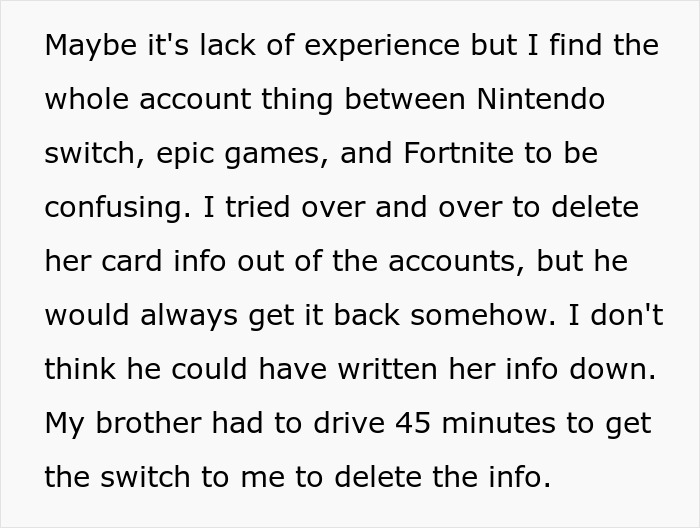 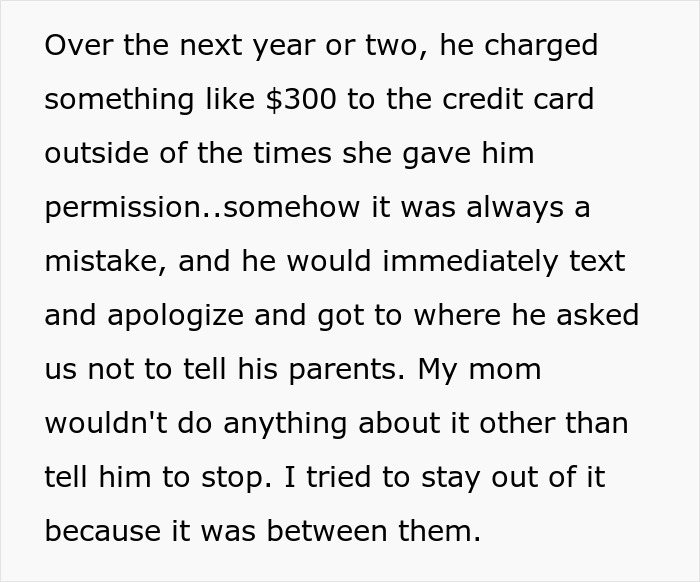 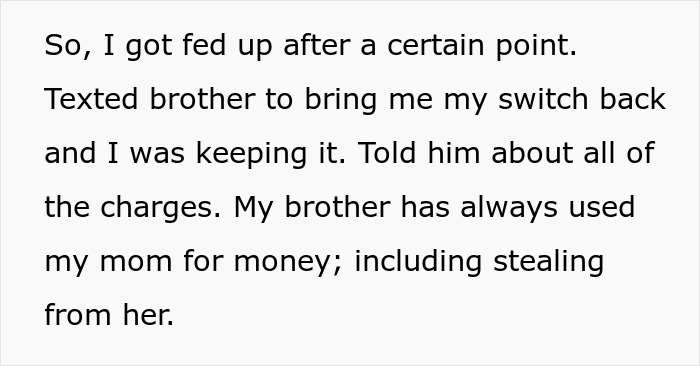 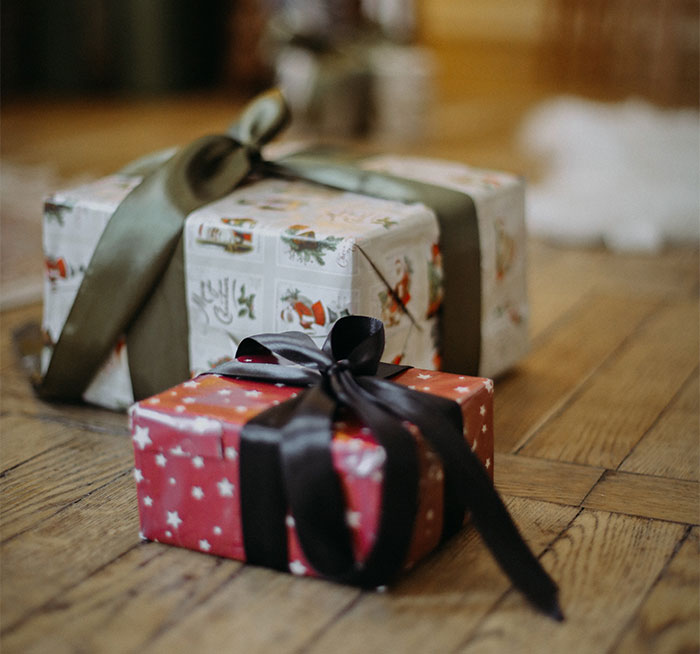 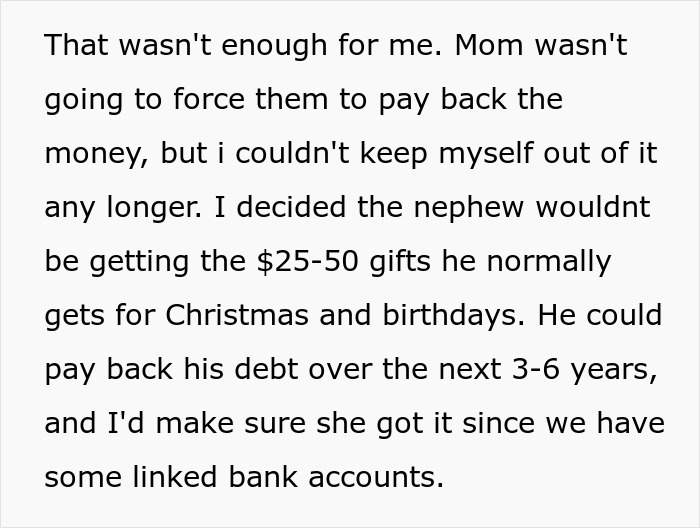 The author of the post said that he’d been withholding birthday and Christmas cash gifts from his nephew, sending the money to his mom, instead. It’ll still take a few more years for the entire debt to be repaid. What’s more, it’s not even clear if the kid will realize that he’s being punished for what he did.

One redditor suggested that they could even send their nephew a card saying, “$25 has been paid in your honor to the Grandmother Fortnite Fund.” This might not be a bad idea if the end goal is to teach the kid a lesson, and not just repay his grandma all the money he took.

There are two issues at play here. One is that stealing is obviously wrong and that children need to learn the natural consequences of such actions. Withholding gifts, especially cash gifts, is actually a pretty decent way to approach the situation.

However, there needs to be a feedback loop: the child needs to understand, very clearly, why this is happening and that stealing will not be tolerated. Kids tend to look to their immediate surroundings for feedback on their actions. If there’s no feedback, they might not understand that what they’re doing is wrong… or that they can get away with it if they (pretend to) apologize.

The other issue is that there’s potentially a case of video game/internet/tech addiction at play here. Video games, especially free ones with a battle pass and microtransaction model like Fortnite, are literally built to be addictive. People are kept playing because they’re rewarded not just with the bright colors and constant action, but because there’s a thrill when you buy in-game skins, weapons, etc.

If you’re prone to gambling addiction or, you know, a kid, it can be incredibly hard to resist getting all of that cool, shiny new gear from the latest update. It really doesn’t help if you’ve got access to your grandma’s credit card info.

A while back, Bored Panda got in touch with writer and parenting blogger Molly DeFrank about limiting screen time for kids at home.

“When parents see amped-up sibling spats, if screen time ends and your child falls apart, if your child complains of boredom when screens aren’t an option: these are all good indicators that your kids might be ready for a screen break. The bad news is that kids are spending seven hours per day on digital entertainment. This is not good for our kids,” she told us during an interview, earlier.

“We get to decide how much and what kind of tech to allow in our homes. If the screen time status quo isn’t working in your house, confidently make a change,” she said. “If our kids only have two or three hours of unstructured time at the end of a school day, how much of that time do we want them consuming entertainment?”

We might love technology, but too much of it can bring out some of the worst aspects in our children. “Putting tech in its proper place in your home will require a little trial and error. But allowing kids to develop skills and habits outside of the digital world will repay dividends for their mental, emotional and social wellbeing. (Interesting that many tech giants are some of the most screen-restrictive parents!)” DeFrank told Bored Panda before.

“Good parents can have different screen time plans that suit their unique family. But whatever that plan is, create firm boundaries. In the long-term, you’ll find that your kids turn their boredom into opportunity. We also need to ditch the idea that our job is to entertain our kids. We are not cruise ship directors, we are parents. Guide, help, love, nurture, cultivate, equip, mentor? Yes. Entertain? No.”

Meanwhile, here’s how other readers reacted to the story about the thieving nephew 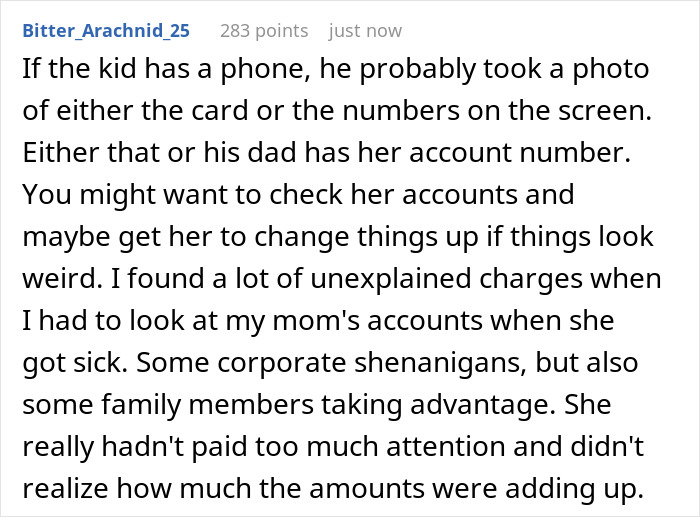 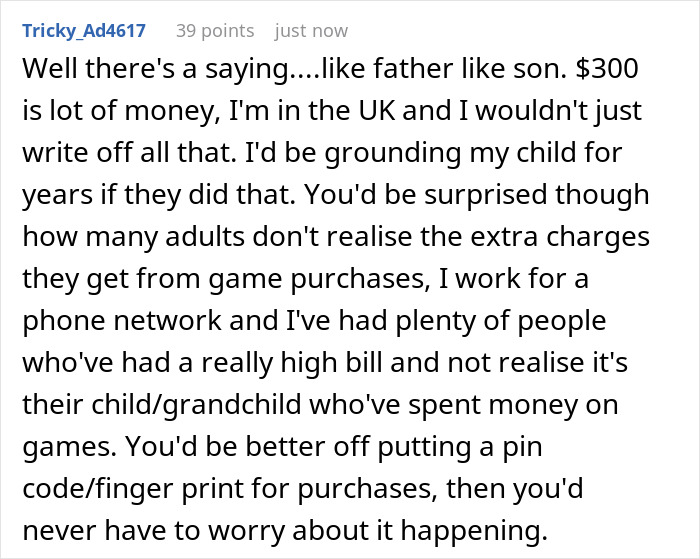 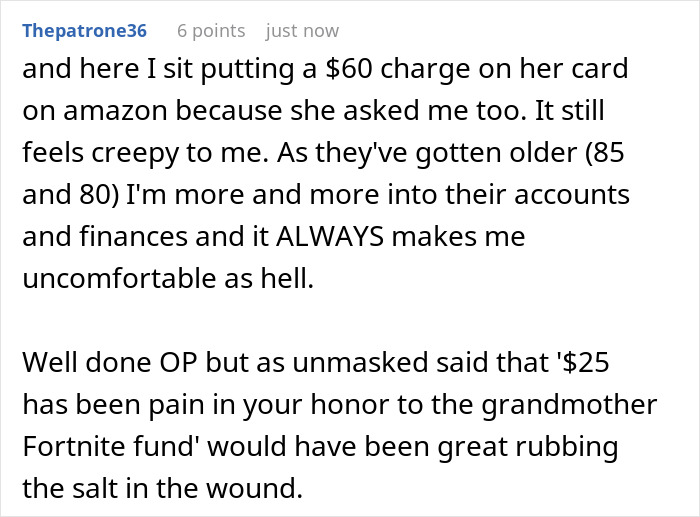 The post Kid Steals From Grandma And Spends It On Fortnite, Gets A 3- To 6-Year-Long Lesson From Uncle first appeared on Bored Panda.