Birthday parties are fun! Or, at least, they’re supposed to be. Unfortunately, things sometimes don’t go according to plan, and you’re left dazed and confused, wondering what just happened. Even something as simple as throwing a small party for your child and their handful of besties can turn into a huge, school-spanning drama, as some people make a mountain out of a molehill. Birthday invites are a pretty big deal at school.

Redditor u/BrokemomThrowaway turned to the AITA online community for some advice on a sensitive situation. She shared how her daughter’s teacher and her classmates’ parents all started sending her angry emails for ‘excluding’ their kids from her birthday party. Here’s the situation, though: the OP only wanted to invite her daughter’s 4 friends from class. However, now she’s dealing with a major headache, as a lot of parents decided to get upset over this. You’ll find the redditor’s full story, in her own words, below.

Bored Panda has reached out to u/BrokemomThrowaway via Reddit, and we’ll update the article as soon as we hear back from her.

Birthday party invites can cause a lot of drama at school 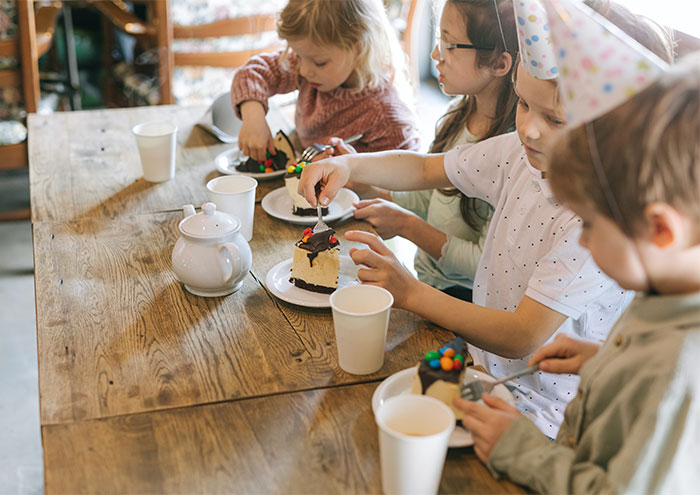 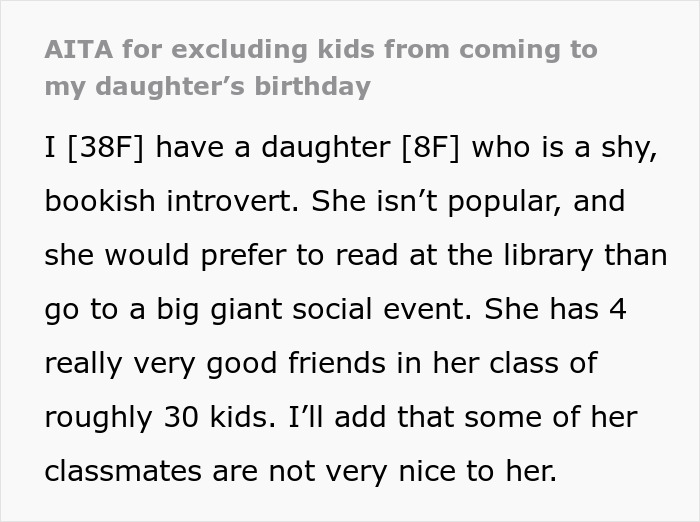 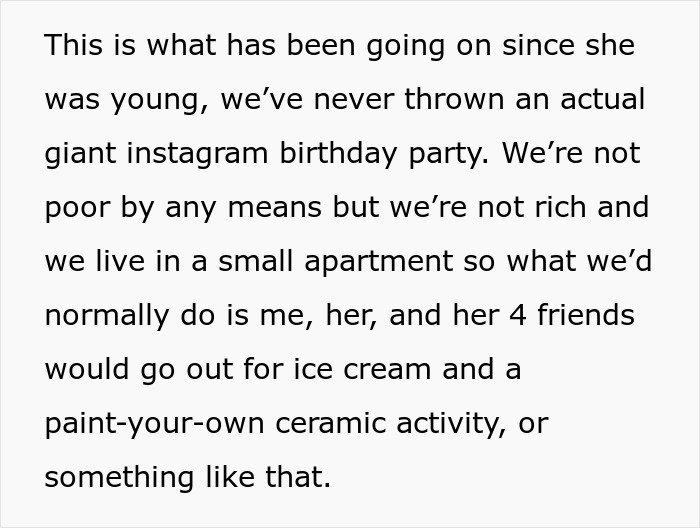 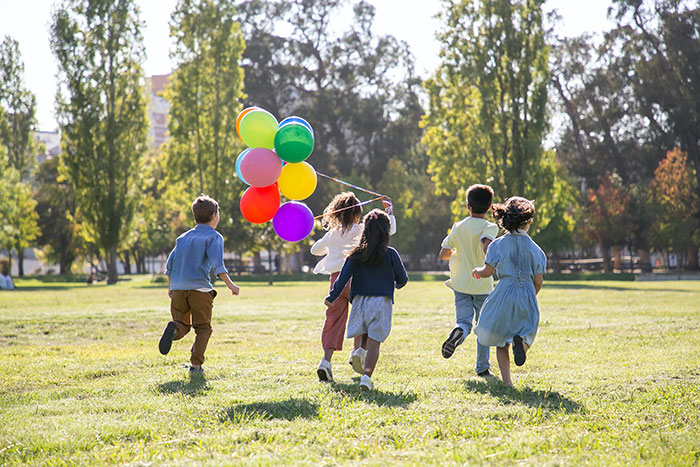 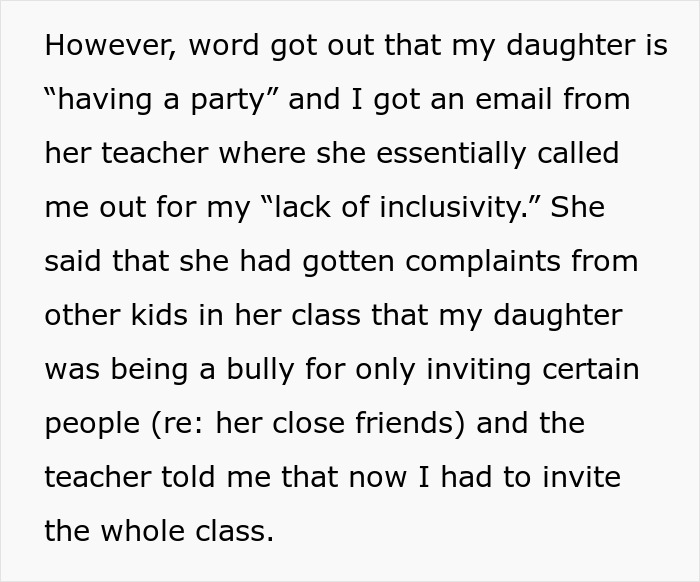 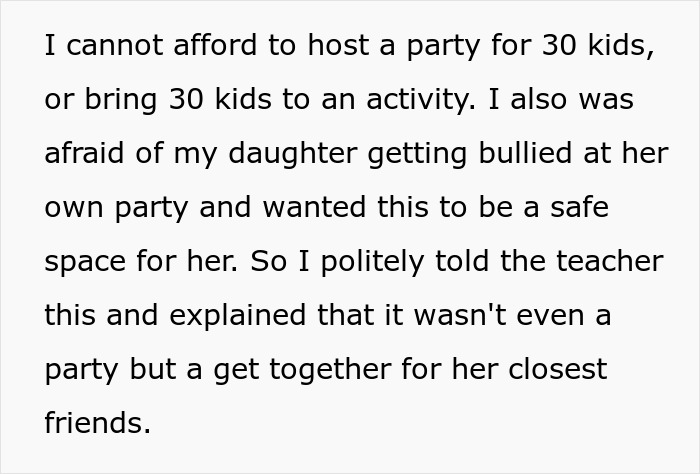 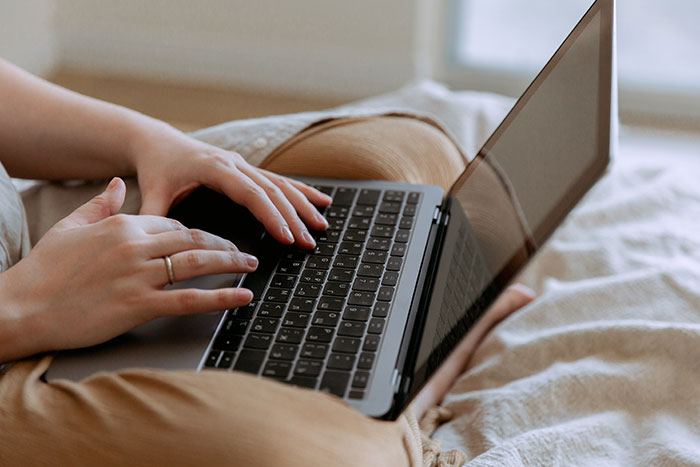 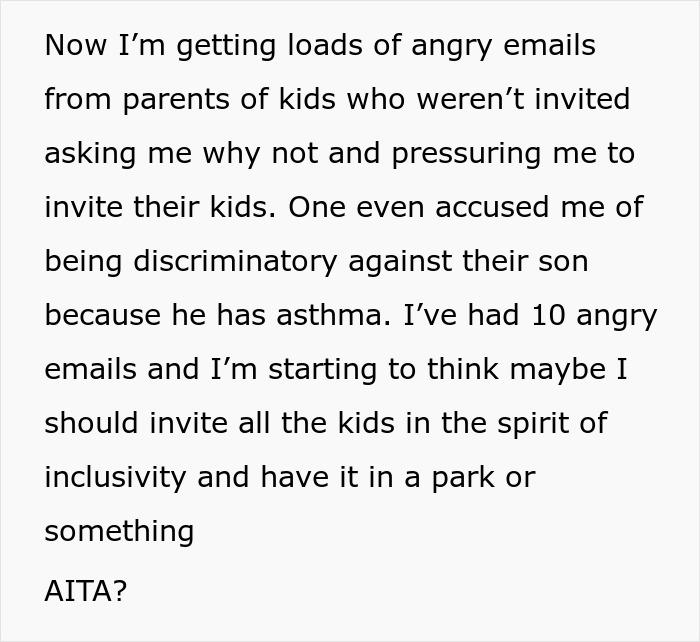 The vast majority of the redditors who read u/BrokemomThrowaway’s post agreed that she definitely didn’t do anything wrong in this case. The other parents, however, seemed to be more interested in expressing their outrage than actually figuring out what happened.

Look, we get it: nobody likes to feel like they’re excluded. And, in some cases, kids can be mean and even ‘weaponize’ birthday invites to separate the people they like from those that they don’t. An example of what you probably shouldn’t do is hand out birthday invites in class just to the chosen VIP classmates. At the same time, it feels deeply weird to expect every child to invite every classmate every single time they celebrate their birthday. The logistics of this alone are making our heads spin!

Forced egalitarianism feels plain wrong when you’re talking about classmates who don’t necessarily even get along with (or even actively dislike) your child. That’s not to mention that your kid might not like big crowds and may prefer to have a short, cozy get-together with just a few of their nearest and dearest pals.

You could, potentially, tackle the issue by having two events. A small ‘party’ at school with treats for all the kids to enjoy, as well as a separate celebration, meant for actual friends. That might offset anyone feeling left out. Unfortunately, that puts a lot of extra pressure on the parents who have to bankroll everything. For some households, it’s not financially viable to do that. And that’s beside the fact that their children might prefer to avoid being in the spotlight at school. Let’s face it, bringing a cake and snacks to class, with everyone standing around in a circle, can get pretty awkward. Not everyone likes that level of attention. 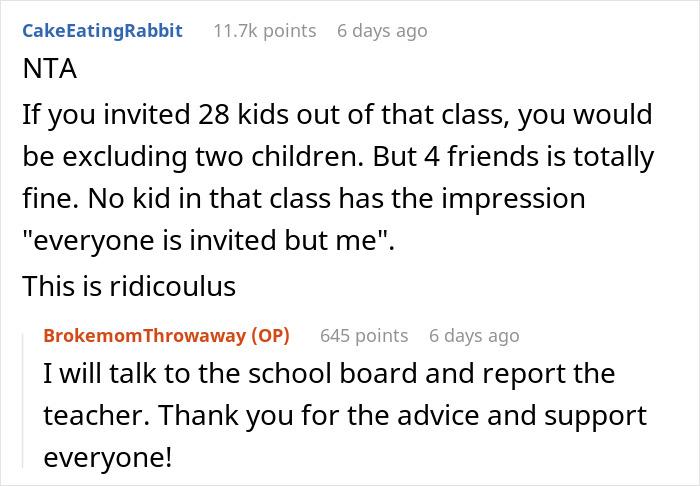 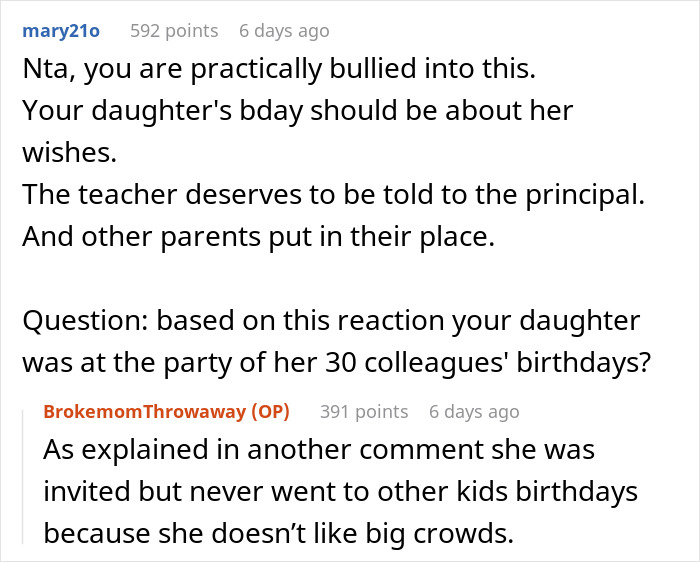 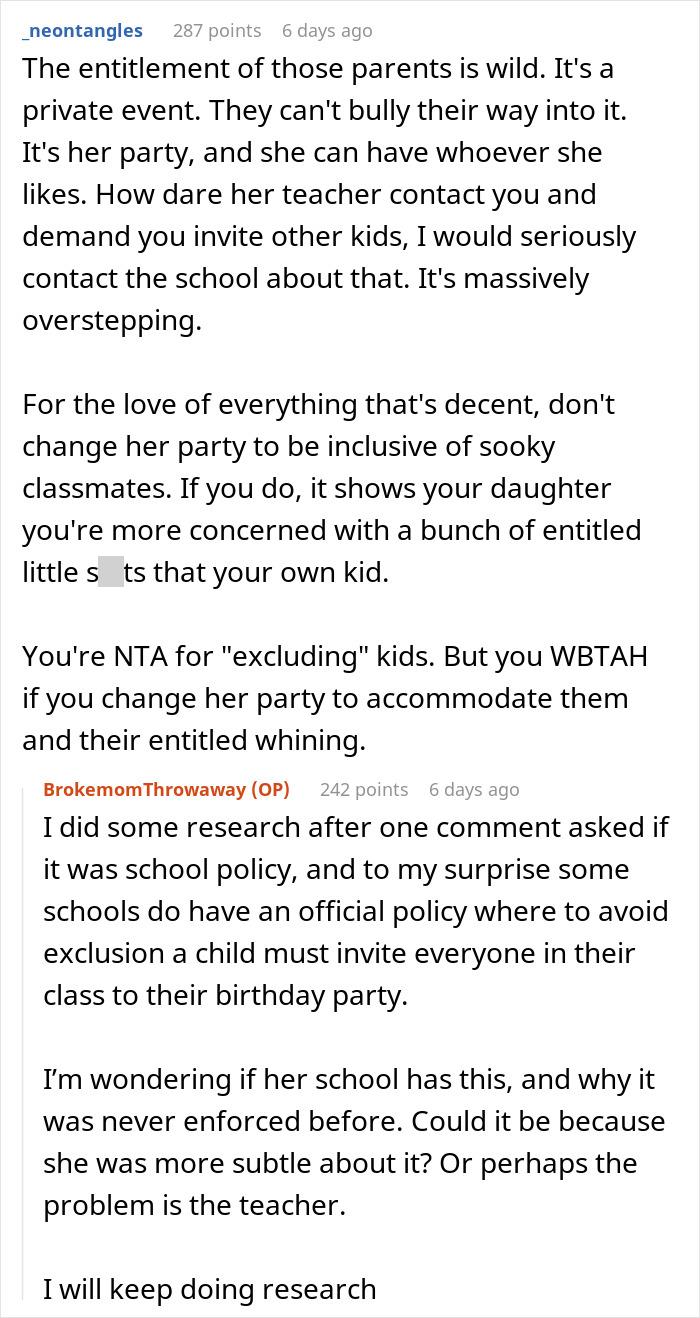 It’s pretty clear that, in this case, neither the mom nor the daughter did anything wrong. However, some children do act incredibly entitled on their birthdays. Recently, we’ve written on Bored Panda about how birthday parties can be the perfect opportunity for parents to teach their kids about the importance of generosity and humility. Parents can lay the foundations for birthday traditions where the theme is giving back to others, rather than just being the recipient of gifts and attention.

For example, you might encourage your child to donate a toy, book, or item of clothing to charity. Or you might decide to make birthday pancakes or a special dinner to mark the occasion. This can help keep them grounded and curb any stronger feelings of over-entitlement further down the line. Nearly everyone enjoys feeling special, but others tend to resent people who always put their needs above everyone else’s.

What do you think of the entire situation, dear Pandas? Who do you think was in the wrong? Have you ever witnessed a similar drama unraveling at school? How do you deal with birthday invites at school? You can share your opinions in the comment section at the bottom of the post.

Most people were on the mom’s side. Here’s what they had to say about the whole school drama 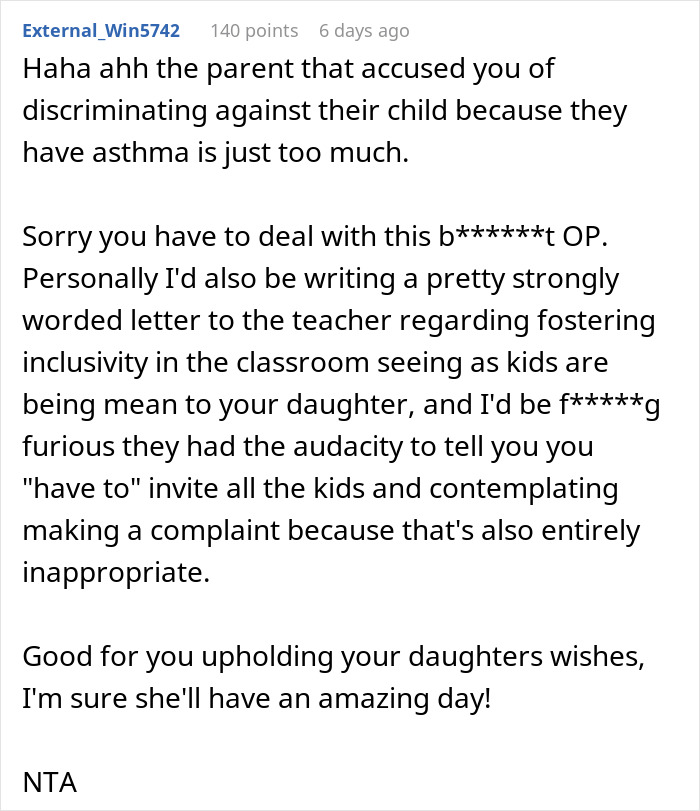 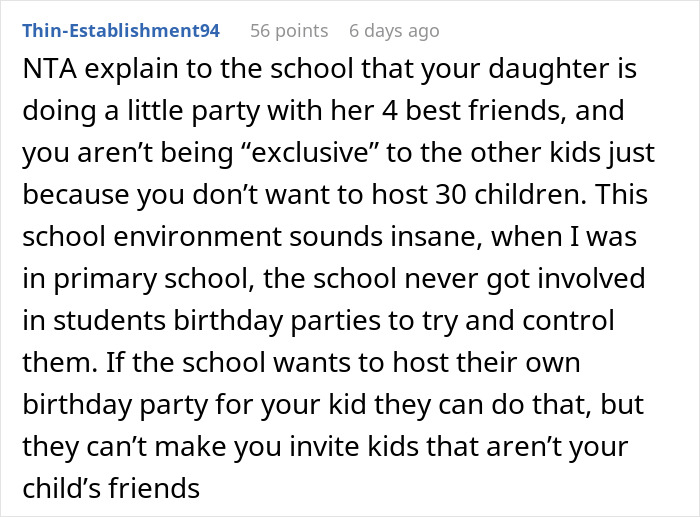 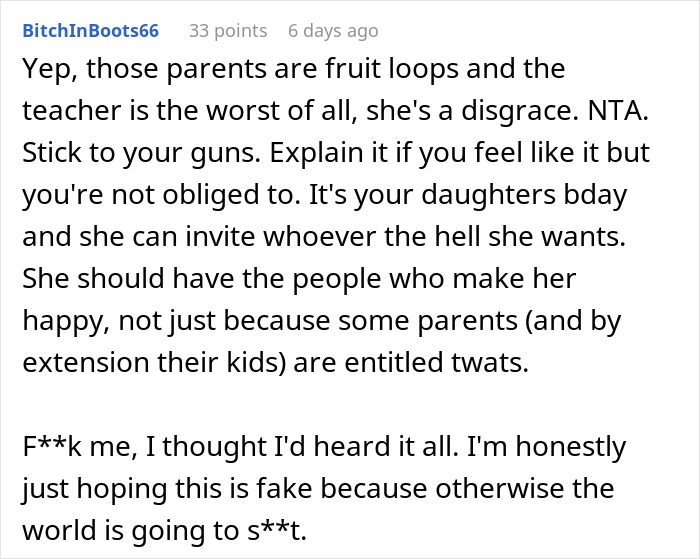 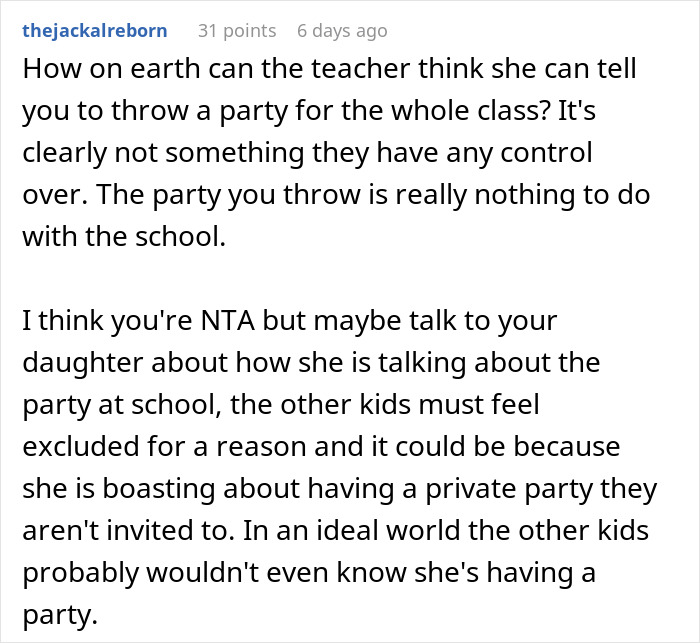 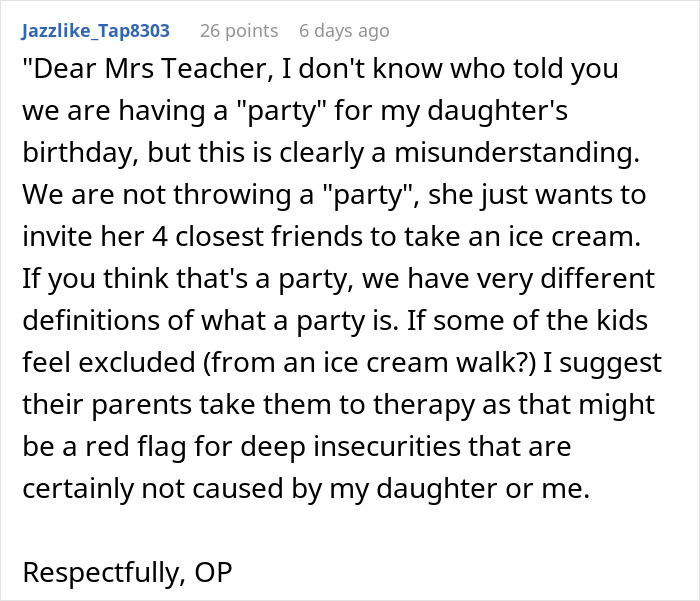 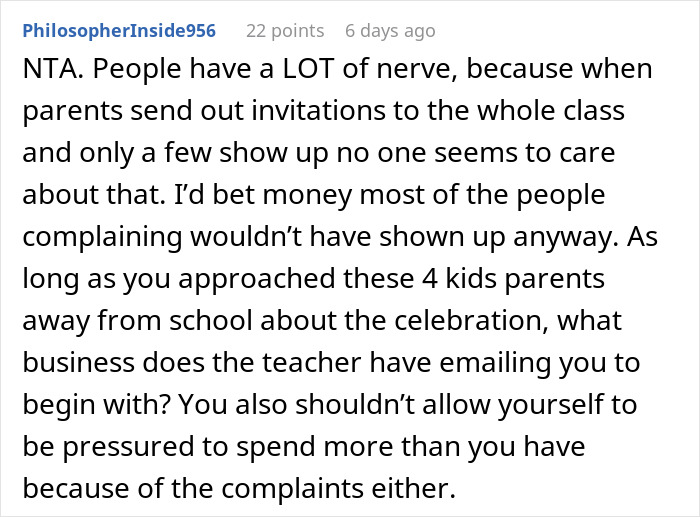 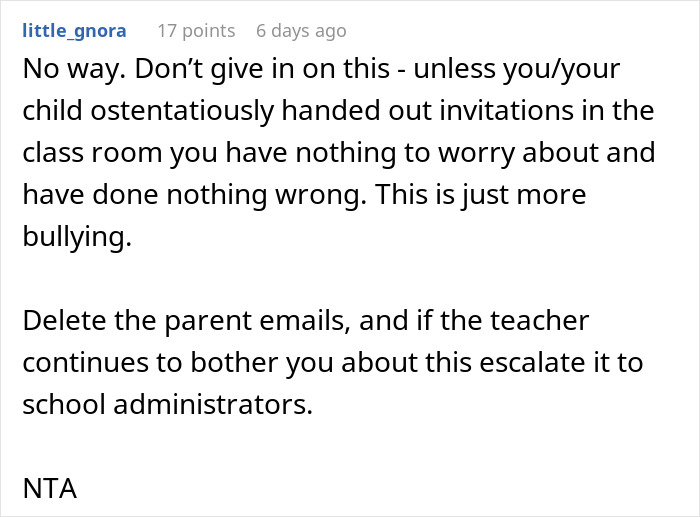 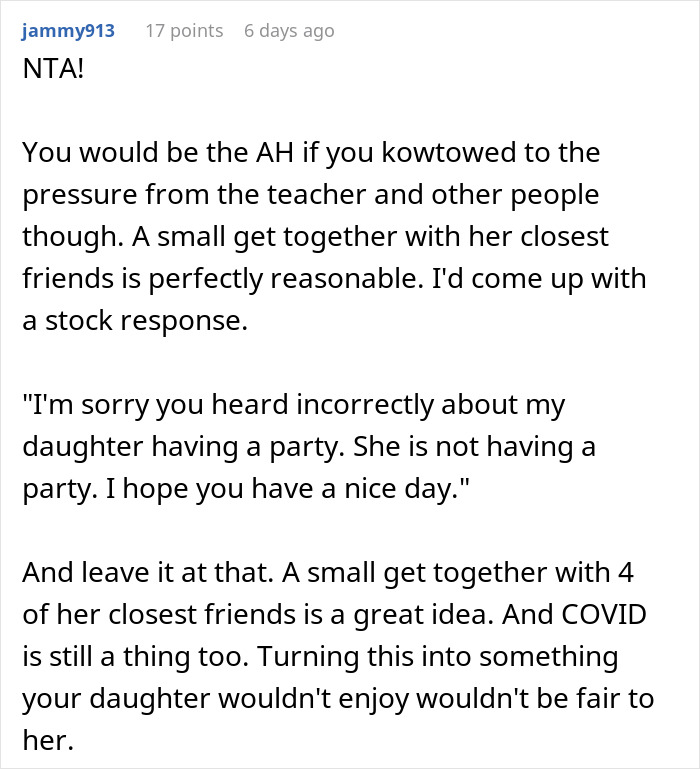 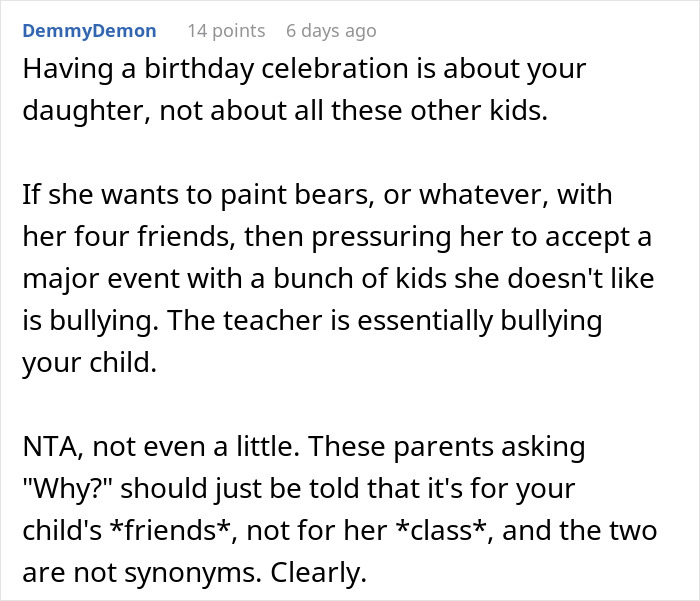 The author of the story later updated her post. She decided to stand up for herself and her daughter 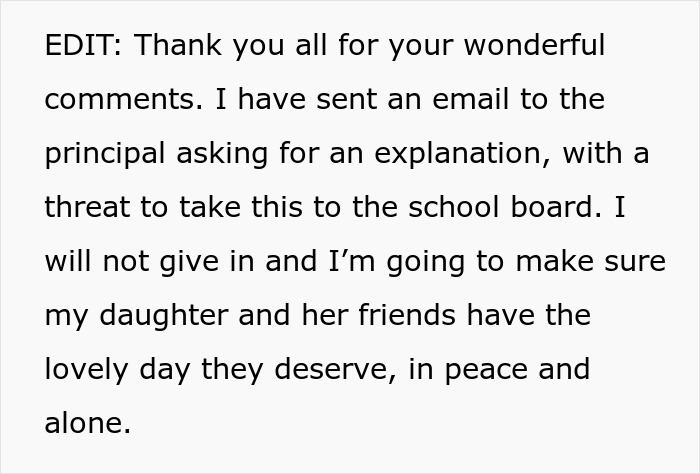 The post “Lack Of Inclusivity”: Mom Is Confused After She Gets Spammed With Angry Emails For “Excluding” Kids From Her Daughter’s Birthday first appeared on Bored Panda.