You should never, ever, mess with other people’s food. It sounds like common sense, but like anyone who has spent even a bit of time on social media and Reddit knows, common sense isn’t all that common. And one internet user’s story shows to what extent some people might go to steal your food… and what might happen as a result.

Redditor u/gottmilk_ turned to the AITA community for a verdict on whether or not he was a jerk because of how he finally proved that his lactose-intolerant roommate kept stealing his food and milk. In short, he decided to switch the almond milk he’d been drinking with regular milk. And as anyone who is intolerant to lactose knows, the effects of that can be unpleasant, to say the least.

Scroll down for the full story of revenge and how the internet reacted to it, Pandas. Let us know in the comments who you think was in the wrong. Do you think that switching the milk was a fair punishment for food theft? Or do you think playing on someone’s food intolerances is a step too far? Tell us what you would’ve done in this situation. 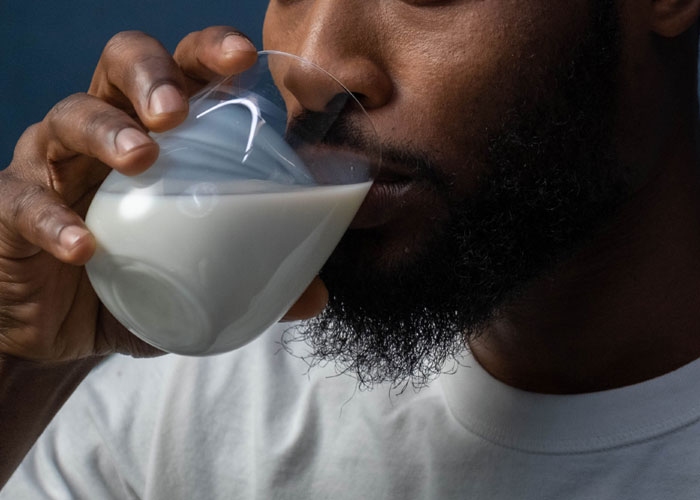 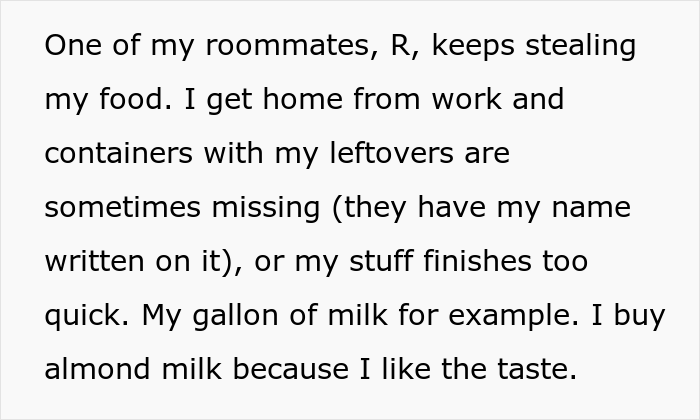 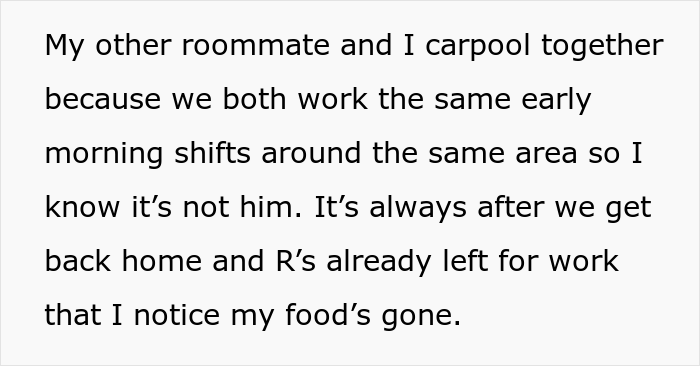 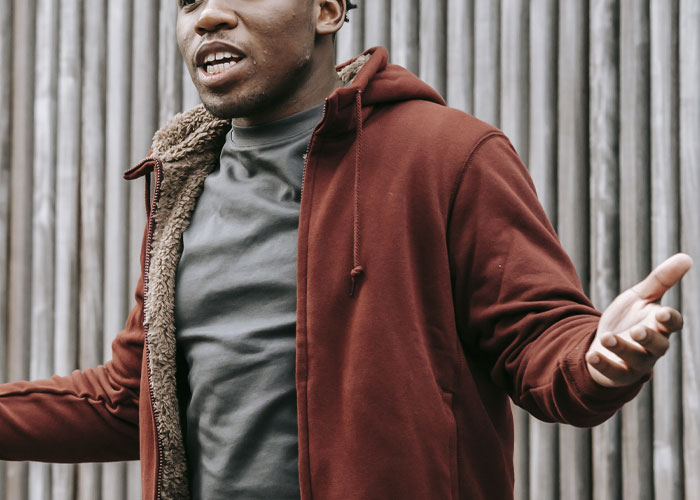 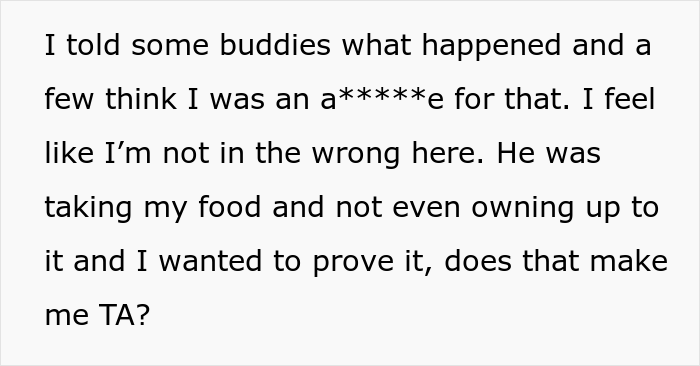 Bored Panda got in touch with fitness coach Anna Armagno Toussaint to have a chat about food intolerances and allergies. She also shared her opinion about boundaries, communication, and switching milk as far as lactose-intolerant food thieves are concerned.

“Food allergies can have a wide variety of effects. For some, it is ‘mild’ though still uncomfortable like headaches, stuffiness, or lethargy. For others, it can be much worse, especially allergies like peanuts causing scary anaphylaxis. If you find that after eating (especially certain meals or foods) that you are tired or nauseated or have a headache consistently, that may be a sign to get an allergist involved or start cutting out that food,” the fitness coach shared with us.

Anna said that giving up our favorite foods can be tough if we find out we’re actually allergic to them. “If the allergy isn’t bad you might be able to get away with it once in a while or find an alternative that tastes great,” she said that, for example, for lactose intolerance, Lactaid ice cream is really good.

“The biggest thing is to commit for even a short time in the hopes that seeing the difference and feeling much better will allow you to let things go. In time allergies change, [which happens] about every 7 years, but the best thing is to avoid things that make you sick.”

We also wanted to get coach Anna’s perspective on people stealing food and switching food out. “This is tough since it becomes an issue of respect as well and feels personal. In general, lactose intolerance is not life threatening so the roommate is probably fine, if uncomfortable, after eating something to which he is sensitive. And truly the person shouldn’t be stealing anyone’s else’s food,” she said.

“That said you have to be careful with true allergies. It can be dangerous for people with some allergies to have the foods they’re sensitive to as they can cause serious distress. I know people don’t like conflict but maybe the suspicious roommate can consider taking a picture each day of his food or labeling it—or just asking the roommate if he has been eating it. Establishing boundaries may he a conversation for another day for these two.”

It’s difficult to gauge the exact part of the global population that is actually lactose intolerant. For instance, some research shows that a whopping 70% of people are intolerant to lactose around the world. Meanwhile, as many as 48% of United States citizens are said to be intolerant as well. However, newer research suggests that this number may in fact be far smaller, standing at 12%. Which is still significant, but a far smaller proportion of people.

Lactose intolerance, also known as lactose malabsorption, is usually harmless. However, the symptoms can be uncomfortable and include diarrhea, gas, and bloating after eating or drinking dairy products.

The main reason for lactose intolerance is usually your body producing too little of the enzyme lactase (with an ‘a’). If the amount of lactase is too low, your body may be unable to digest milk products. If you consistently feel bloated after eating dairy, you may want to consider seeing your doctor and seeing if you are, in fact, intolerant to lactose.
Though nobody enjoys having their food stolen, it’s worth considering taking the mature approach and having a long and honest discussion with your suspect about their actions. You have to draw clear boundaries and then enforce them. In short, if your roommate keeps stealing your food, that kind of behavior has to have consequences… without waiting an entire year, gritting your teeth, and hoping that they’ll change their ways.

However, before you go switching food items around, have a good long think about the thief’s food intolerances and allergies. Some allergies can be very dangerous and even deadly, which is why you probably should have an honest chat with them before changing up what’s in your food. Though… what person with food allergies eats whatever they find in the fridge, without knowing what the ingredients are? 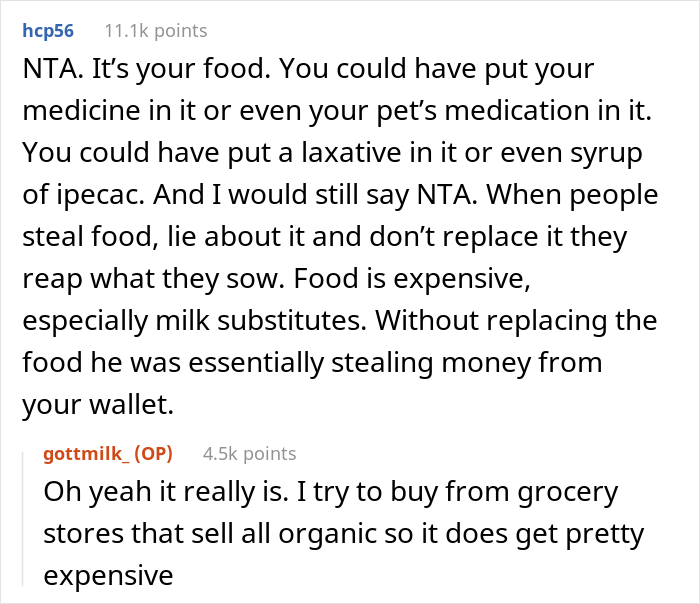 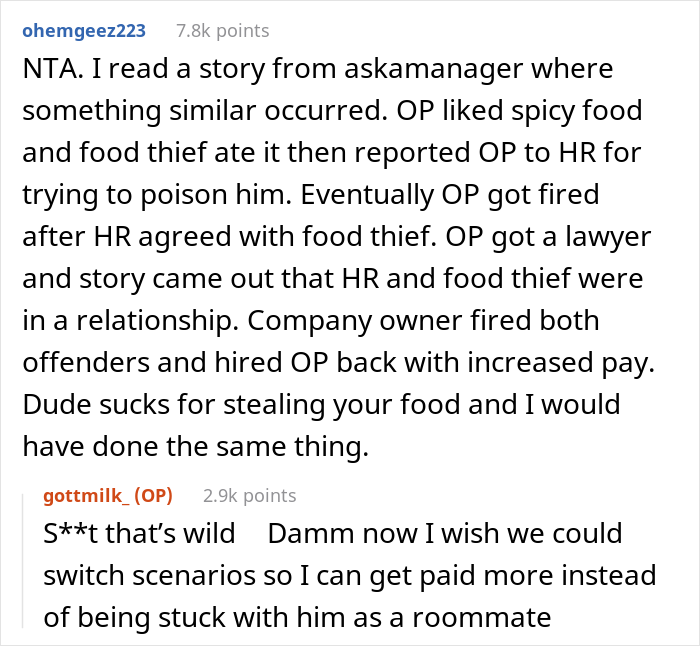 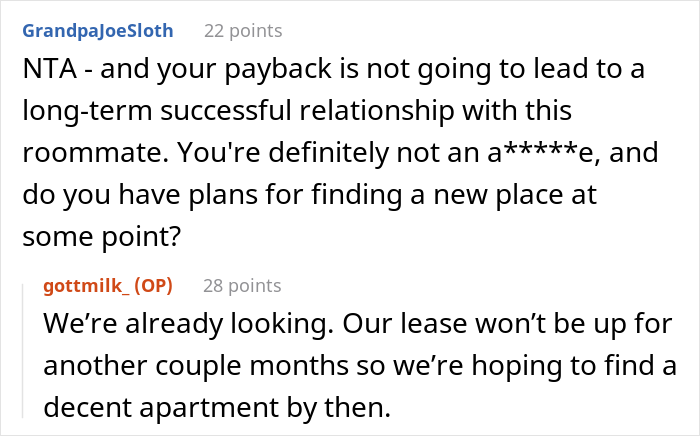 Here’s how other internet users reacted to the viral post 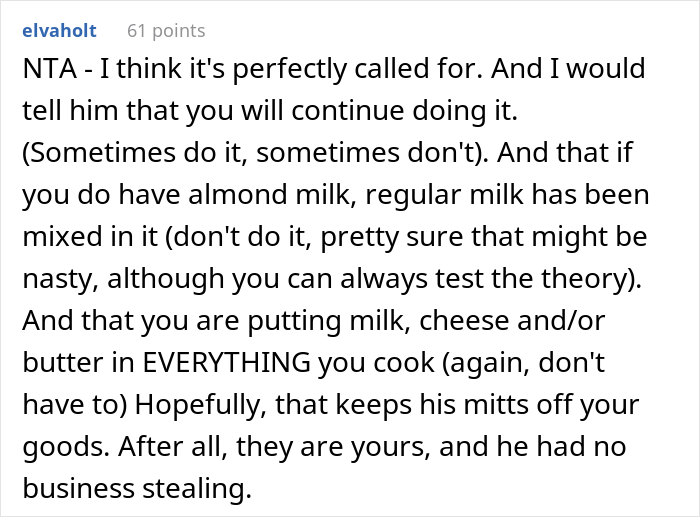 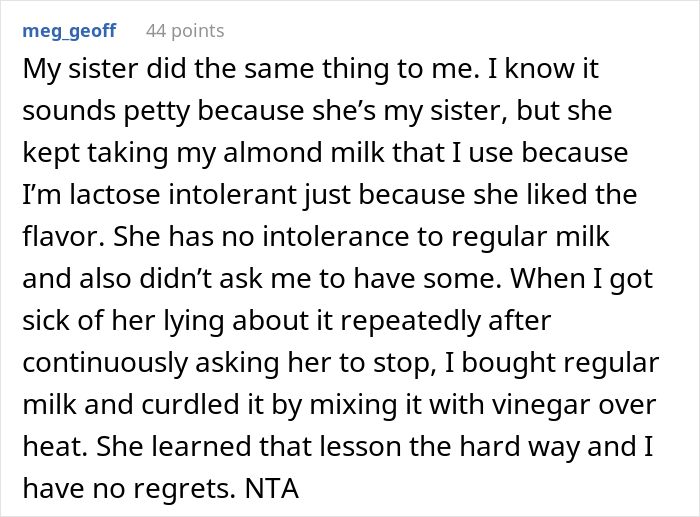 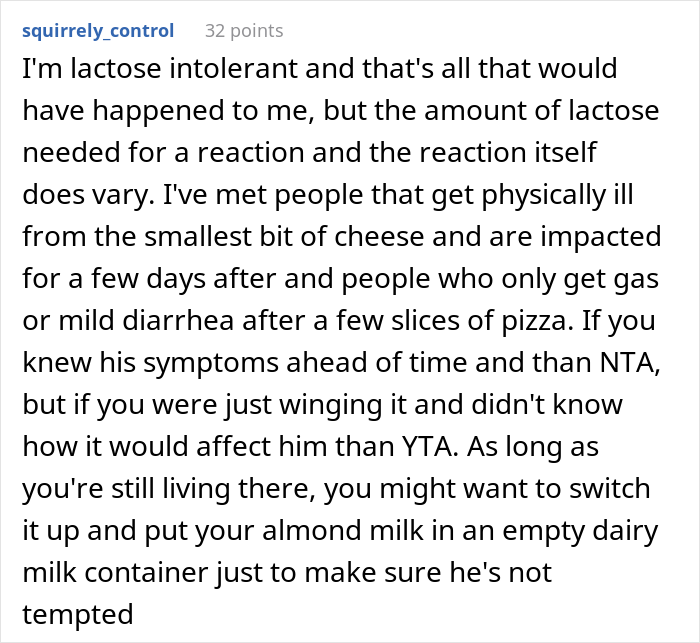 The post Lactose Intolerant Food Thief Is Outraged When His Roommate Switches To Regular Milk To Prove He’s Been Stealing first appeared on Bored Panda.