There’s a lot of talking about housing prices going up and how being a homeowner will be less common for young people and future generations. The other option is to rent, but it seems that this is also getting out of reach for many people with the monthly prices getting ridiculous and people are considering the third option, which is to just live with their parents if they can.

The prices have gone up not only for new tenants, but for the current ones as well. Even if you pay in a timely manner, keep up with maintenance and have a good relationship with your landlord, it might not guarantee that they will let you stay at the same or just slightly higher rent.

A woman on TikTok, Kara, who often shares financial advice, just renewed her contract and her rent increased by $855 a month, and what is even more ridiculous is that this is legal in the state of Texas where she lives. 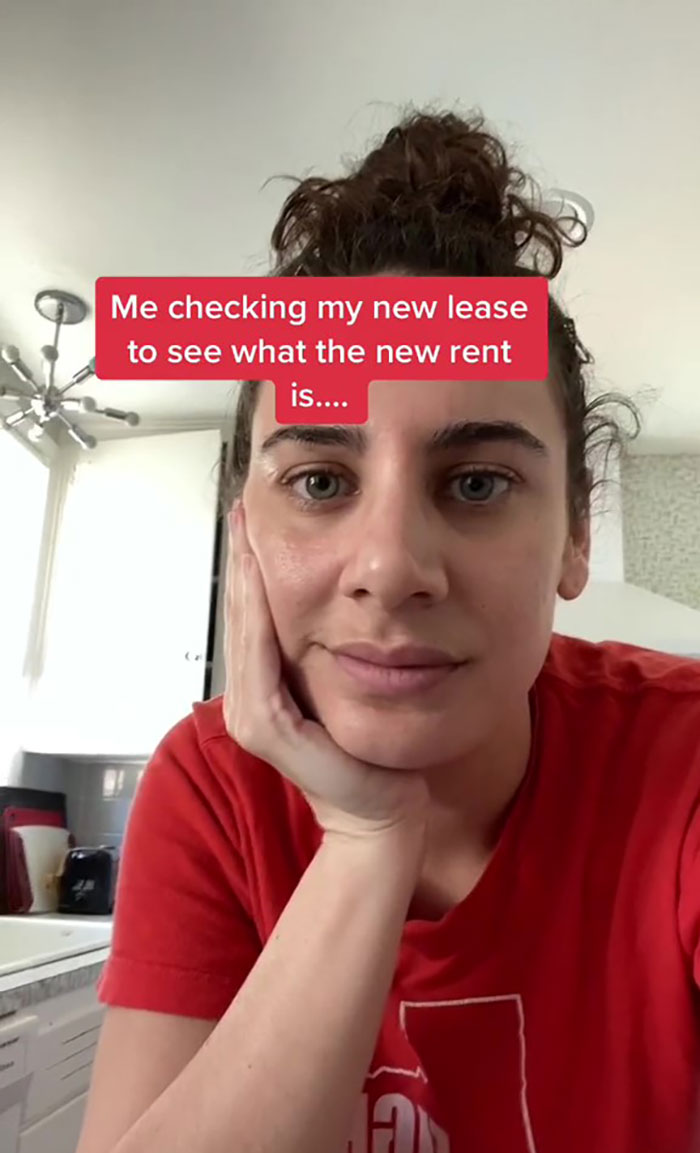 Kara Perez is a financial expert and founder of Bravely Go, “an award winning international financial education company” as it is introduced on its official website. She started it after managing to pay her $25,302 student debt earning $22,916 a year and created a community of women talking about money and financial changes.

She explores financial topics on her TikTok account as well as on her Instagram and recently one of her videos went viral in which she showed just how much monthly rent can increase. Previously she was paying $1,895 a month and her new contract says it will be $2,750, which is $855 more. 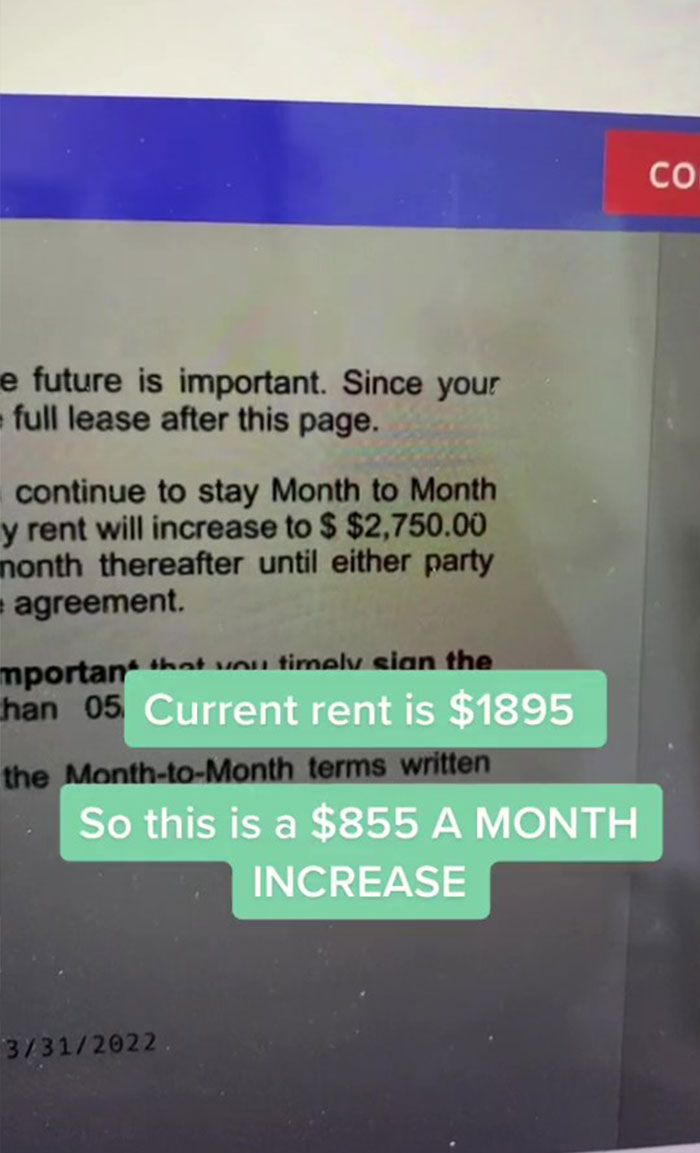 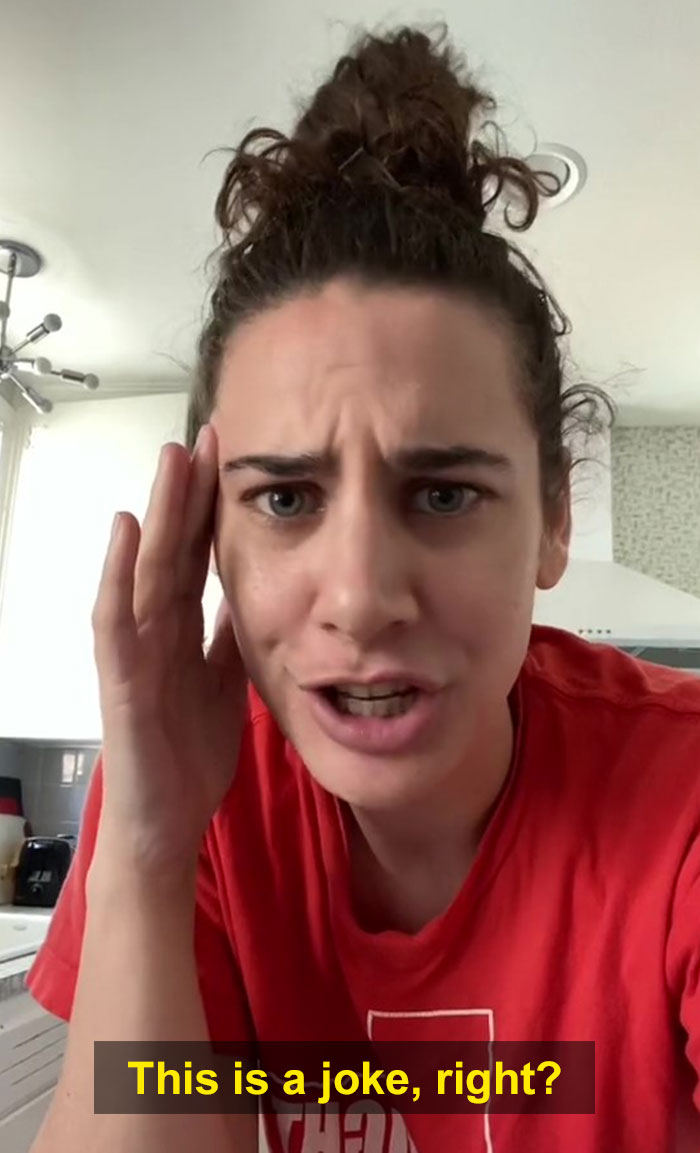 Over 185k people saw the video and many were shocked at that amount. A lot of them noticed that this was a month-to-month lease, which means that the lease lasts for 30 days but it involves an automatic renewal.

However, because the tenants have the right to move out any time with shorter notice, there is more risk for the landlord to rent this way, which is why they tend to charge more.

But even if Kara signed a 12-month lease agreement, she would still have to pay $2,500 a month, which is $605 more than what she was paying before and is still a lot.

There were also a lot of people who raised the question of legality. Many places in the world have a limit of how much rent can go up. For example, according to Haart, in the UK, rent typically raises about 3 to 5 percent a year.

The rules around rent increase listed on GOV.UK are: “your landlord must get your permission if they want to increase the rent by more than previously agreed” and “the rent increase must be fair and realistic, which means in line with average local rents.” 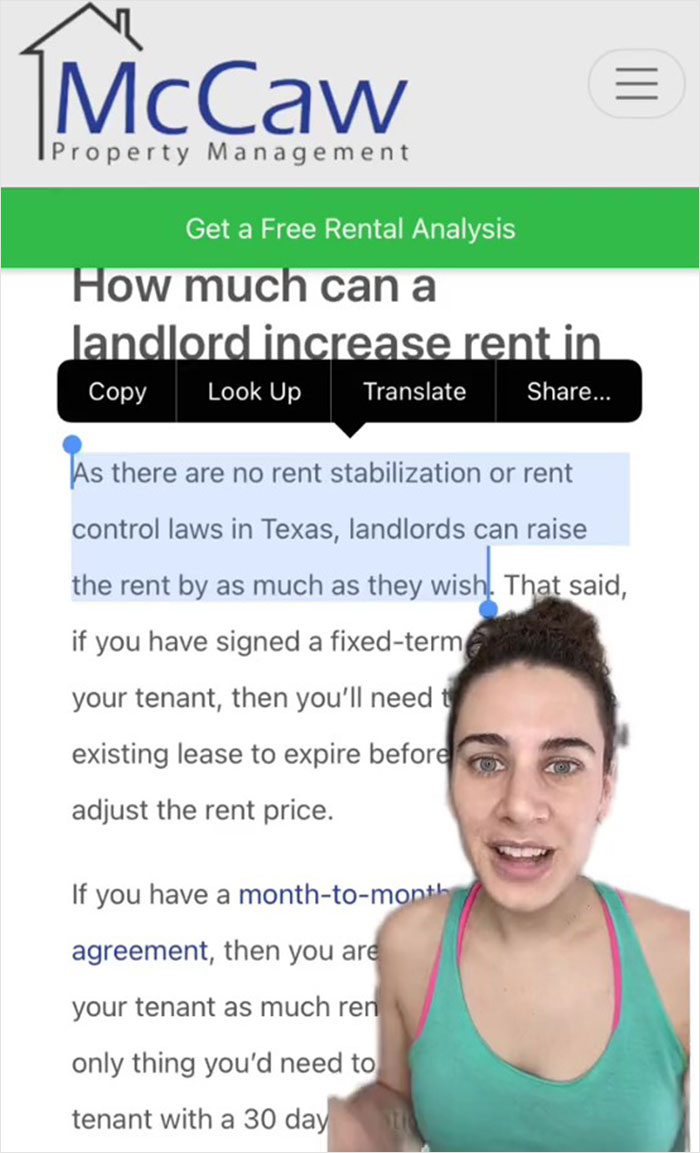 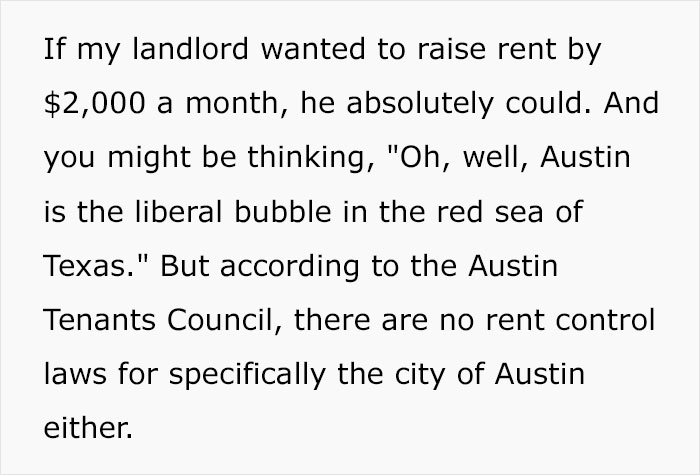 In the US, there is no federal law controlling what is the maximum rent increase, but different states have different limits. For example, California issued a bill that doesn’t allow “an owner of residential real property from, over the course of any 12-month period, to increase the gross rental rate for a dwelling or unit more than 5% plus the percentage change in the cost of living, as defined, or 10%, whichever is lower, of the lowest gross rental rate charged for the immediately preceding 12 months, subject to specified conditions.”

However, in Texas, where Kara lives, there are no such regulations. Landlords in Texas can increase their rent as high as they want to, and the only thing they need to do is wait for the lease to end. And for month-to-month agreements, they have to warn their tenants 30 days in advance about the change in price. 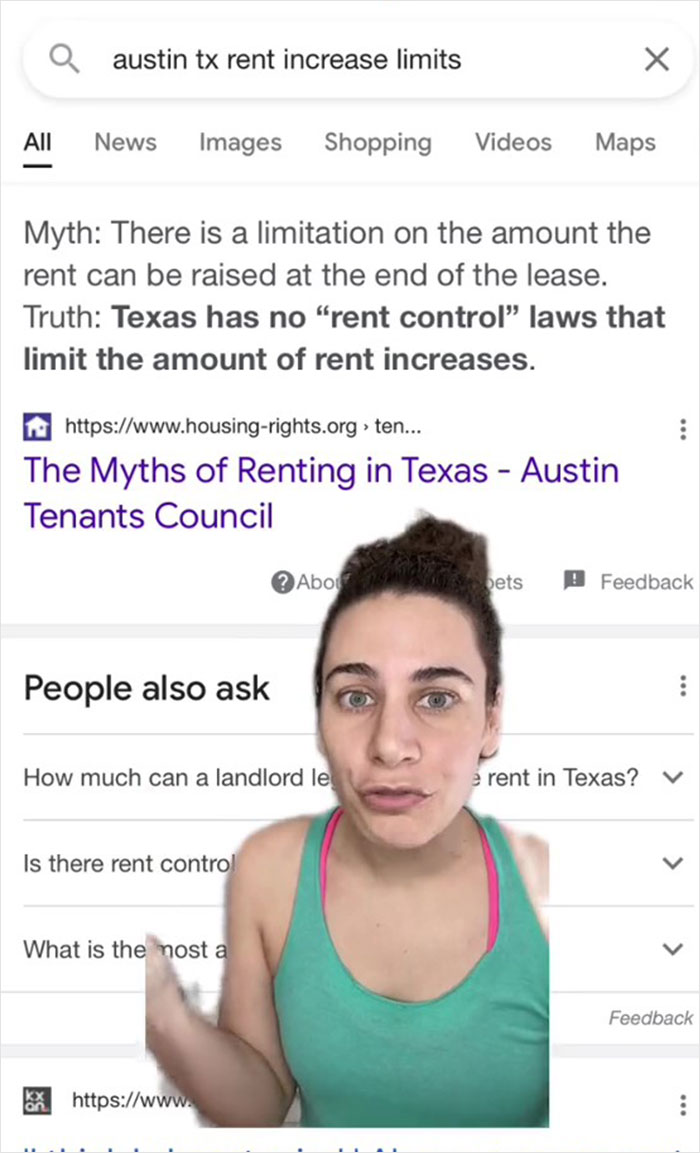 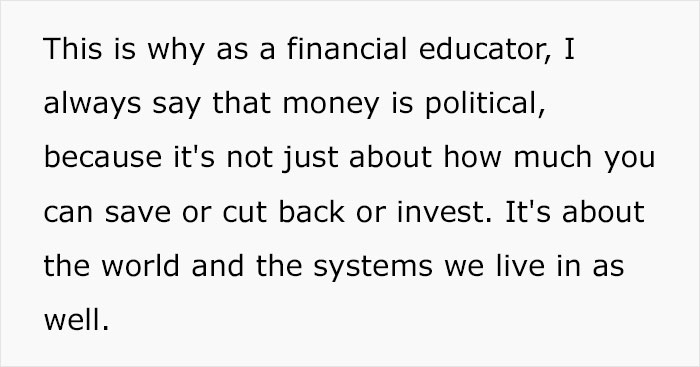 Texas is more of a rule than an exception because only five states in the US (California, New York, New Jersey, Maryland, Oregon) and the District of Columbia have some kind of control on how much landlords can increase rent prices.

When there are no regulations and limits to how greedy landlords can get, price increases should be almost expected. But there is hope to make the new rent price less painful for the wallet. 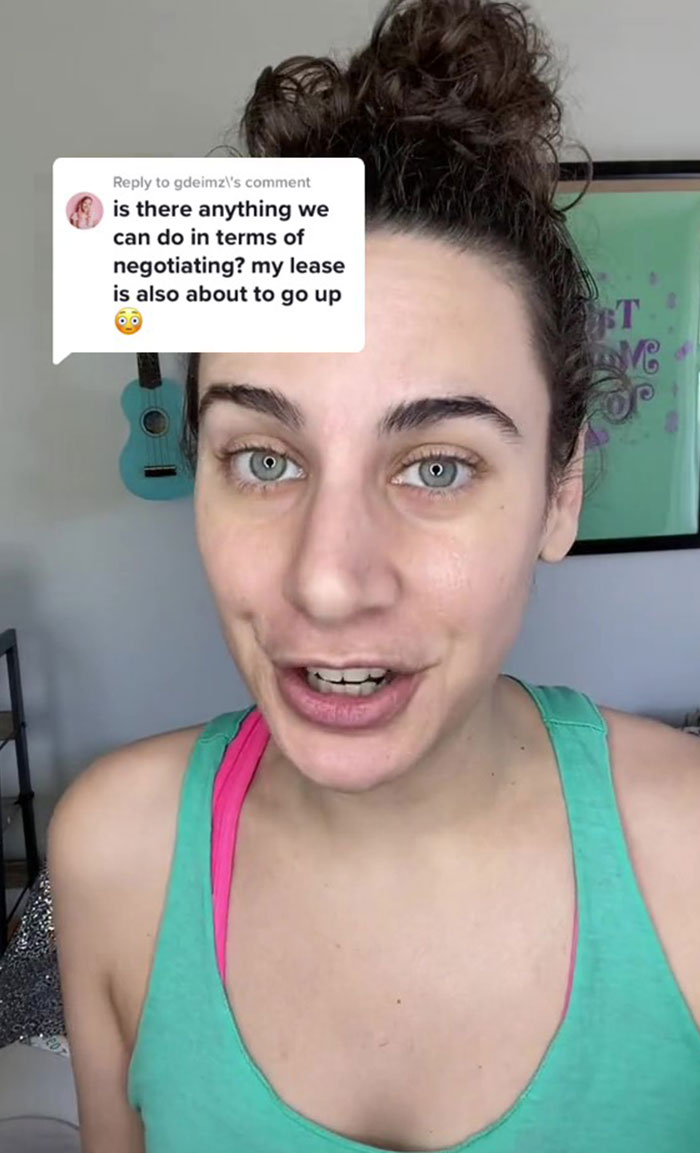 Kara suggests trying to negotiate. You could offer to pay the landlord upfront for a few months so that they’ll trust you more and allow you to have a $100 monthly decrease. You could also remind the landlord that you are financially responsible, that you have paid your rent on time and have a good credit score. Because searching for new tenants is a hassle and also a risk, so show that you’re a good tenant worth keeping, even if that means decreasing rent price.

Kara doesn’t promise anything, because rent prices are going up all across the country and actually the world, but it is worth trying talking to the landlord, because who wants to pay that much? The woman said that at least she doesn’t plan to.

As it was discussed in an earlier article about housing prices going up, rent is increasing for the same reason–because of lack of supply, in other words, there are just not enough houses, so landlords can do whatever they want and know that they will still find a tenant.

Redfin’s Chief Economist Daryl Fairweather explains that one of the biggest reasons for not enough housing is the restrictive zoning laws, which regulate what can be built where.

You can watch the video showing the contract below

Have you experienced the increase in rent prices yourself? Do you think the amount Kara’s rent increased is normal, or do you agree that it shouldn’t be that much? Let us know your thoughts and reactions in the comments!

The post Landlord Suddenly Tries To Raise This Woman’s Rent By 5, And She Isn’t Having Any Of It In Now-Viral TikTok first appeared on Bored Panda.