The following is an article from the book Uncle John’s Bathroom Reader Plunges Into History Again. 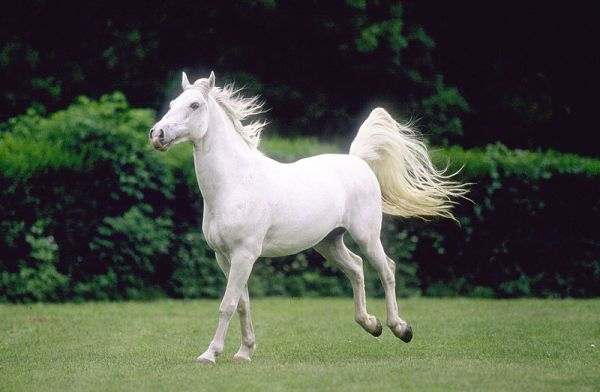 If you think dancing is for sissies, the battlefield ballerinas of Vienna will change your mind.

We’ll start with Hannibal’s elephants and Genghis Khan. Vilano horses from the mountains of Spain were known for their strength at least as far back as the days of Julius Caesar. These big guys carried Hannibal’s warriors across the Alps alongside those famous elephants. Then someone got the bright idea of crossing Vilanos with the Barb horses (whose ancestors carried Genghis Khan and his hordes from Asia). The result was the Andalusian horses of Spain. If all this Alps crossing and horse crossing makes your eyes cross, be patient- we’ve almost got our dancing horses.

In 1580, Charles, Archduke of Vienna, founded a stud farm at Lipica (also called Lipizza), a village in Slovenia close to the Italian border. There, using the Spanish bloodstock, the archduke created strong, graceful horses that are born dark in color but whose coats gradually lighten to a brilliant, snowy white -the Lipizzan breed. At about the same time Austrian royalty also founded the Spanish Riding School in Vienna to teach classical horsemanship. The horses used and bred at this school became exclusively the Lipizzan. 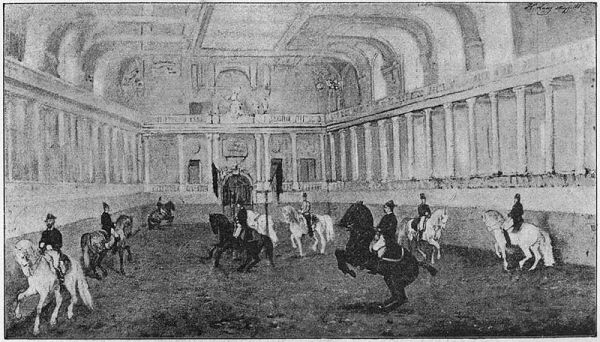 GETTING THEIR KICKS IN BATTLE

By the 1600s, Lipizzans were a must-have for both the aristocracy and the military because of their speed, endurance, and strength. But it was their ability to leap that made the horses state-of-the-art battlefield equipment.

Ground troops quaked with fear when confronted by a Lipizzan’s powerful kicks called “airs above the ground.” These airs included a courgette, where horses reared in their hind legs and jumped. The croustade was fancier, with a leap that had them tucking their legs up in midair. The capriole was the most dazzling feat: a horse leapt into the air with its forelegs drawn under its chest; then, from midair, it kicked out violently with its hind legs. A Lipizzan could make a ballet star look clumsy. 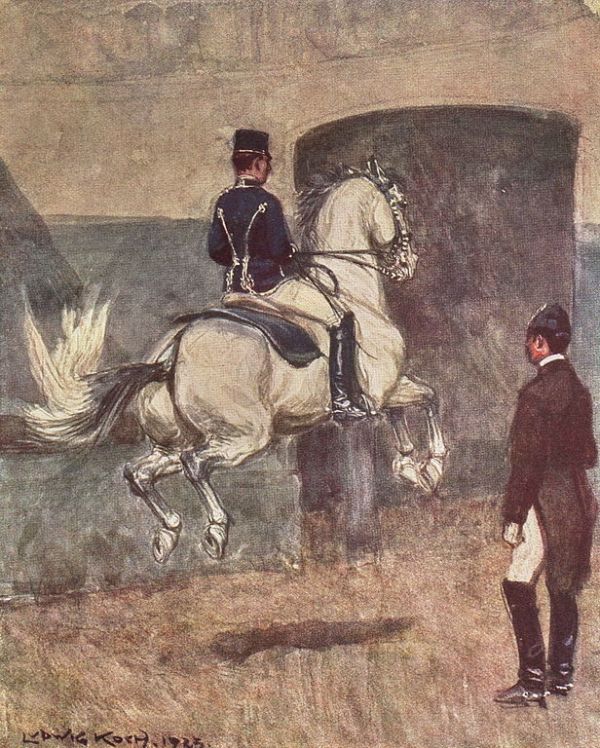 THE PERFORMANCE OF THEIR LIVES

Fast forward to World War II in 1945. Germany was losing the war, and the Allies were bombing Vienna. Hoping to save this Lipizzan stallions, the director of the Spanish Riding School, Colonel Alois Podhajsky, relocated them to St. Martin in Upper Austria, 200 miles (322 km) away. No bombs were falling in St. Martin, but food was scarce. The Lipizzans might have wound up in local casseroles if the U.S. Army hadn’t arrived in Upper Austria at about the same time the horses did.

An American officer recognized the travel-worn Lipizzans. He sent word about them to the headquarters of U.S. general George Patton, who was a horse lover and a competitor in the equestrian Olympic event in 1912. When Patton came to view the horses, Podhajsky had the animals put on the show of their lives- a show that saved their lives. Patton was so impressed that he made the stallions protected wards of the U.S. Army. But the breed was still in danger of destruction if no mares survived. 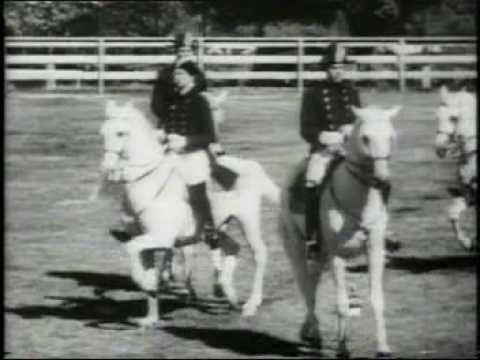 THE CALVARY RIDES TO THE RESCUE

During World War II, the Nazis had moved the Lipizzan mares and foals to a stud farm in Hostau, Czechoslovakia. An American soldier, Colonel Charles H. Reed of the Second Cavalry Brigade (it was a mechanized cavalry by then), looking for information on Allied prisoners held at Hostau, also learned of the horses whereabouts. The information came from a captured German general who worried that the Russians might destroy the Lipizzan mares or ship them to the Soviet Union. 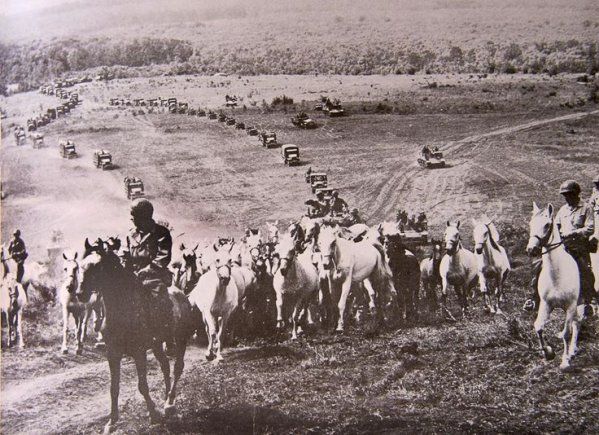 When General Patton learned that the classic horses were in danger, he sent word to Reed: “Get them. Make it fast!” Reed complied. He sent a courier to arrange a surrender at Hostau- where Germans were eager to give up to Americans rather than face the Russians. And Reed launched a lightning strike against Hitler’s SS troops, who wouldn’t surrender and tried to block his plans. But the SS was quickly overwhelmed.

On April 8, 1945, the American entry into Hostau, according to Reed, was a “fiesta,” rather than a battle. Allied prisoners lined the streets, and surrendering German troops welcomed the Americans with salutes and an honor guard. As for the horses, 200 Lipizzans were rescued and were, ironically, protected by the U.S. Army when Nazi SS troops attacked Hostau. By May 7, the war in Europe was over, and arrangements were being yadeto return the horses to the care of Alois Podhajsky and the republic of Austria. 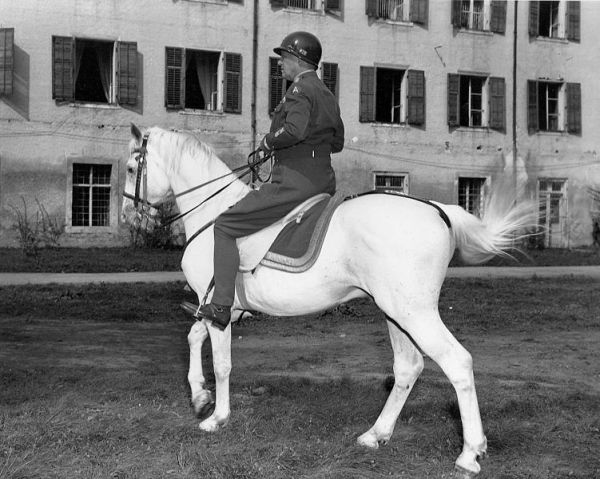 Colonel Reed’s account the rescue of the Lipizzan breed differs in one respect from the traditional version. According to Reed, Patton ordered the rescue of the mares in Czechoslovakia before he saw the stallions St. Martin. Reed claimed that when Disney made a movie of the rescue, The Miracle of the White Stallions, the performance of the horses was emphasized to make the story more dramatic.

However it happened, it’s thanks to the U.S. Cavalry that one of the oldest European breed of horses still performs at the Spanish Riding School. As the magnificent animals leap to do their brattle-worthy airs, audiences from around the world come to watch -from a safe distance.

* The Lippizan is a long-lived horse; 30 to 35 years is their average life span.

* Lipizzans are usually born black and change slowly, through of period of from 6 to 10 years, to their final, pure white color.

* Occasionally, a Lipizzan colt is born pure white, but they are rarities. In the days of the Hapsburg royalty, white colts, when they grew older, were used to pull royal vehicles. 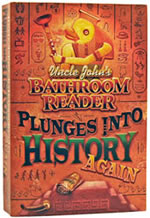 The article above is reprinted with permission from Uncle John’s Bathroom Reader Plunges Into History Again. The book is a compendium of entertaining information chock-full of facts on a plethora of history topics. Uncle John’s first plunge into history was a smash hit – over half a million copies sold! And this sequel gives you more colorful characters, cultural milestones, historical hindsight, groundbreaking events, and scintillating sagas.