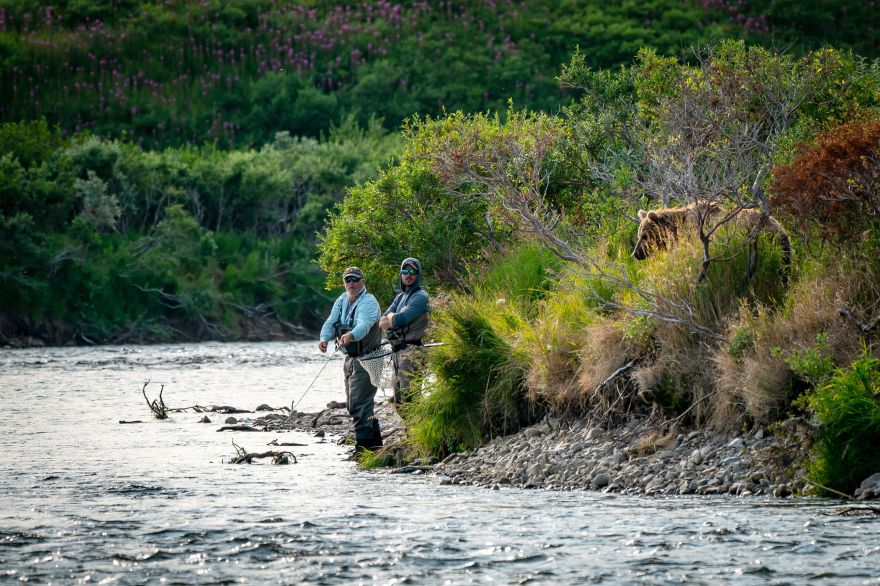 This stunning portrait taken at Katmai National Park in Alaska by wildlife photographer, Robert Hawthorne, definitely caught the eyes of the public as it went viral online.

“That photo strikes a nerve for a lot of people. You look at it and you go, ‘Oh my goodness, I hope I never have a bear that close behind me,’ ” he tells PEOPLE, estimating that the encounter was just 15-20 seconds long. “But really, I wish I [had taken] photos following it … They looked over their shoulder, and then picked the line out of the water, and stood there looking at the bear as it continued down the bank.”

Hawthorne has been photographing wild bears many times before and based from his experience, he could immediately say that the bear is not bound to attack the two fishermen but is looking for the salmon it can catch for dinner in the creek below.

“Knowing from experience there that it isn’t a threat in how it was playing out, I had time to take a photo before letting this guy know that he had a bear behind him,” he says. “And believe it or not, his reaction was simply [that he] looked over his shoulder and continued fishing.”

According to Hawthorne, it is normal for bears to regularly walk up and down the riverbank searching for food, and often dives into the water as soon as they spot something edible! It has been his “adrenaline-filled absolute joy” moment whenever he gets a great shot.

A spokesperson from Katmai says that the bears are harmless as long as they don’t get to taste human food but still cautions people to maintain a safe distance since bears are still wild animals.

Rating Look At These Two Fishermen And A Large Grizzly Bear Behind Them! is 5.0 / 5 Votes: 2
Please wait...
Loading...
Related articles