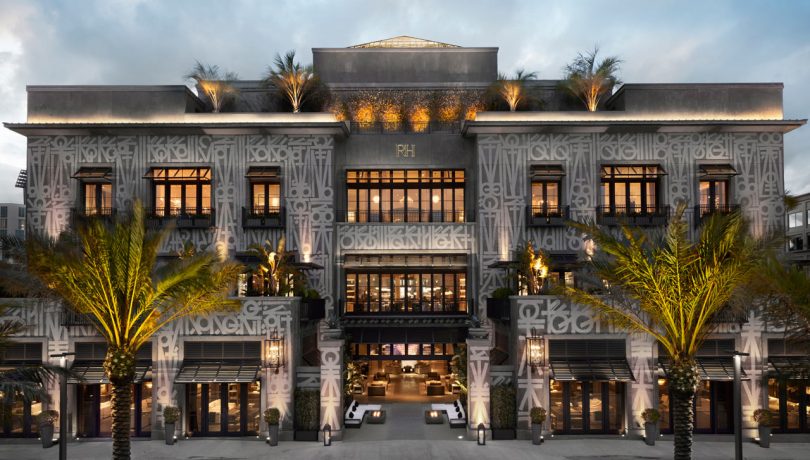 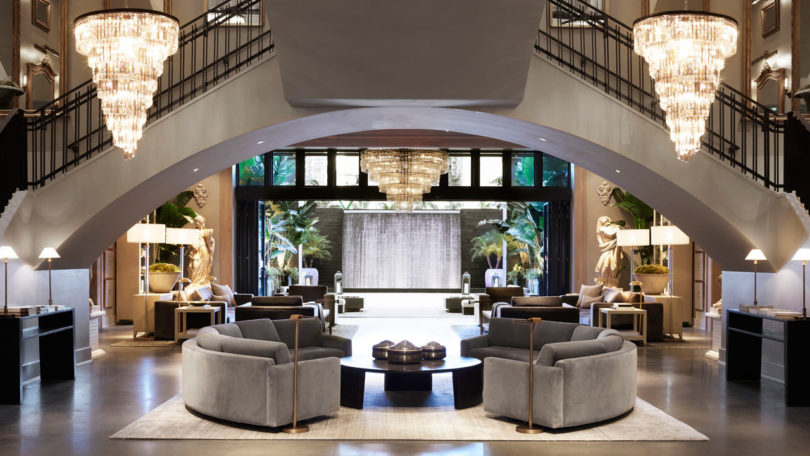 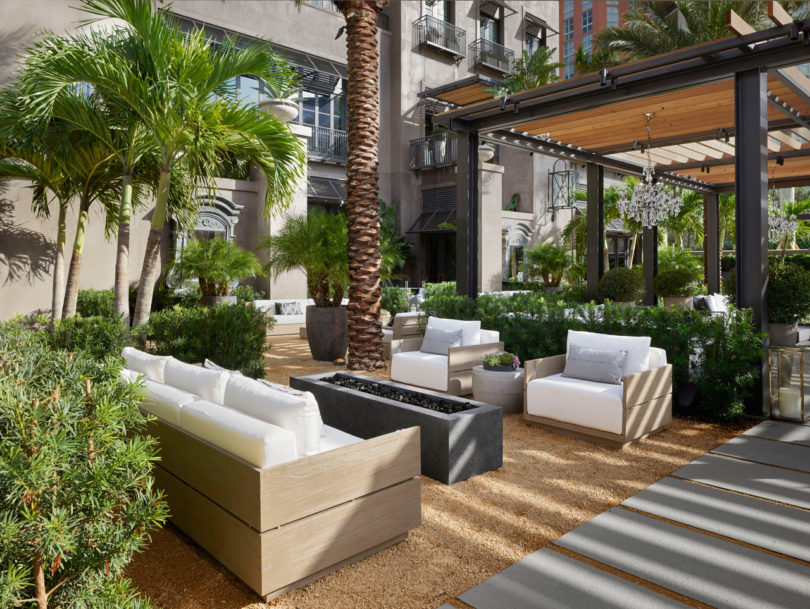 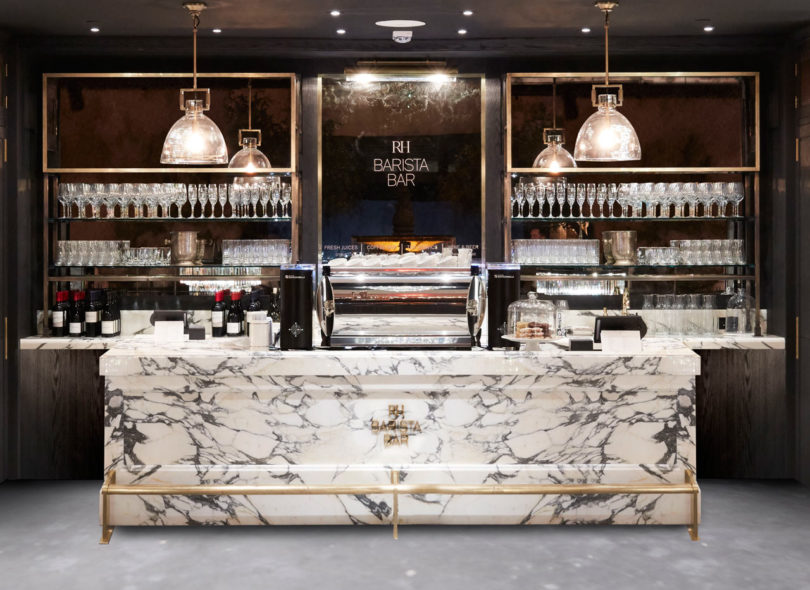 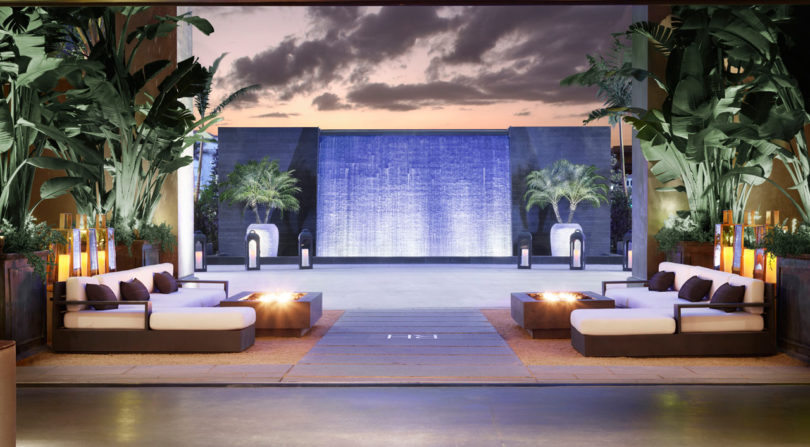 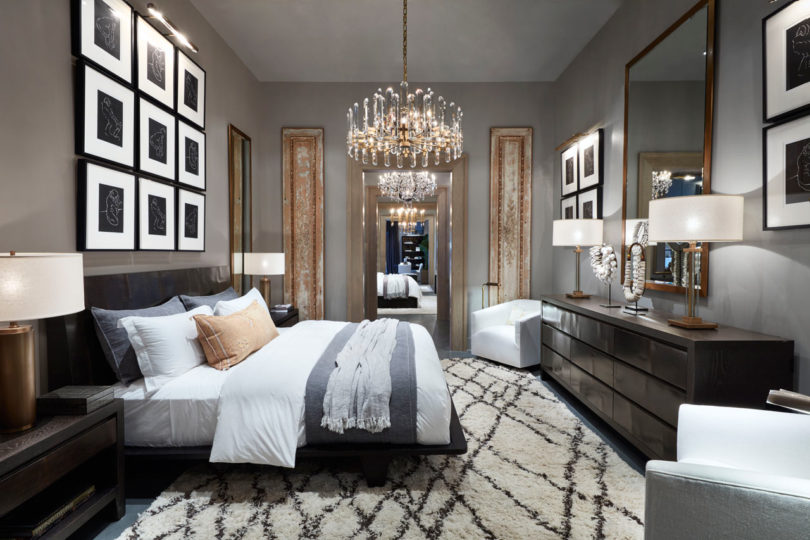 It’s an idyllic oasis in the heart of West Palm Beach: Lushly landscaped gardens rich with Medjool date palms; Moroccan-tile fountains signaling the Barista Bar, where the handcrafted donuts are as much of a pick-me-up as the coffee; a sun-drenched Rooftop Restaurant filled with verdant olive trees and ingredient-driven fare; and French-marble and Belgian-blue-limestone floors traveling through the intimate loggias of the ever-so-European Wine Vault. And we haven’t even gotten to the furniture yet. Because it is, after all, a furniture store—the new RH West Palm, The Gallery at CityPlace to be exact. And there are four floors and 80,000 square feet showing the breadth of RH’s collection to prove it, from RH Interiors to RH Modern, Outdoor, Baby & Child, TEEN, and RH’s interior design services and hospitality offerings. 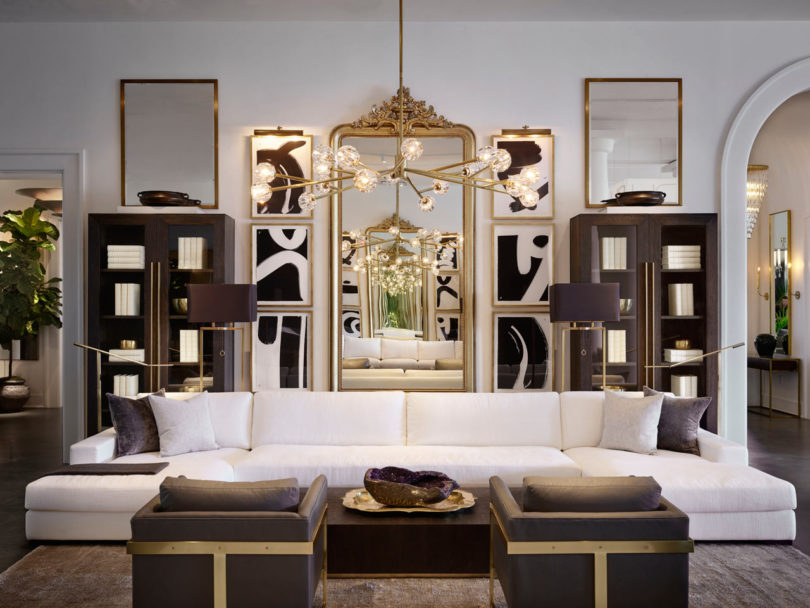 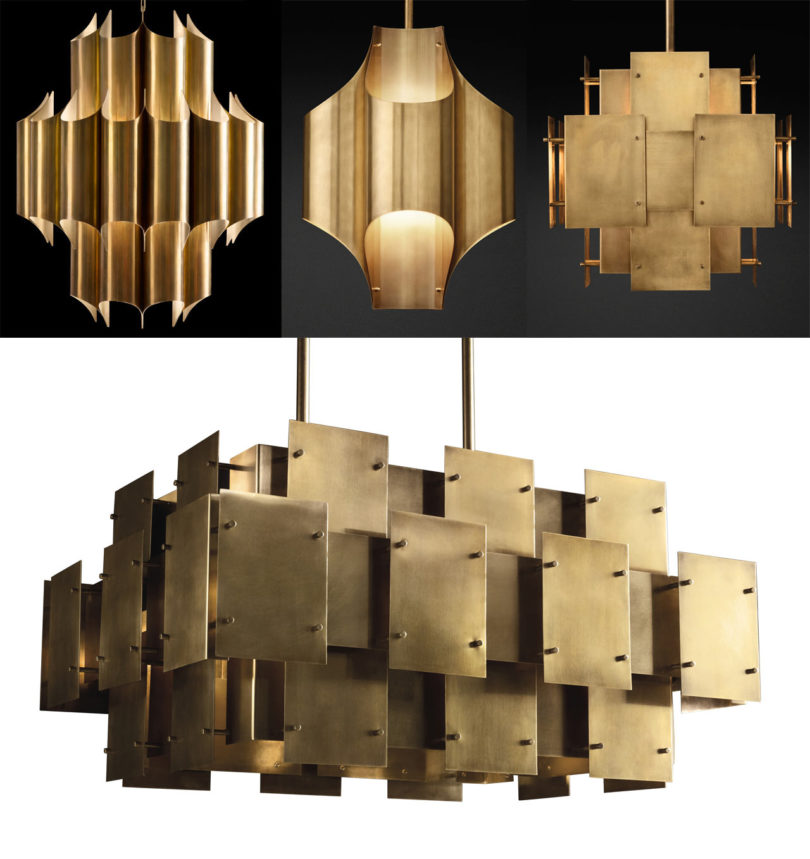 SONNEMAN – A Way of Light for Restoration Hardware

While you wait for your table to open up in the restaurant, you might stroll, with Bellini in hand, past the American minimalist 1950s-style Metropolitan sofa by John Birch of WYETH, or the Marignan, Jonathan Browning’s crystalized version of an industrial chain-link chandelier. You may even come upon iconic reissues like the 1967 Orbiter II lamps, which Robert Sonneman, of SONNEMAN – A Way of Light, first designed 50 years ago and reimagined for RH Modern along with other signature pieces from his archives. With celebrated restaurateur Brendan Sodikoff at the helm of RH Hospitality, RH Chairman and CEO Gary Friedman is changing the way shoppers shop, creating a destination and human experience, and adapting a mentality that says come for the furniture and stay a while. 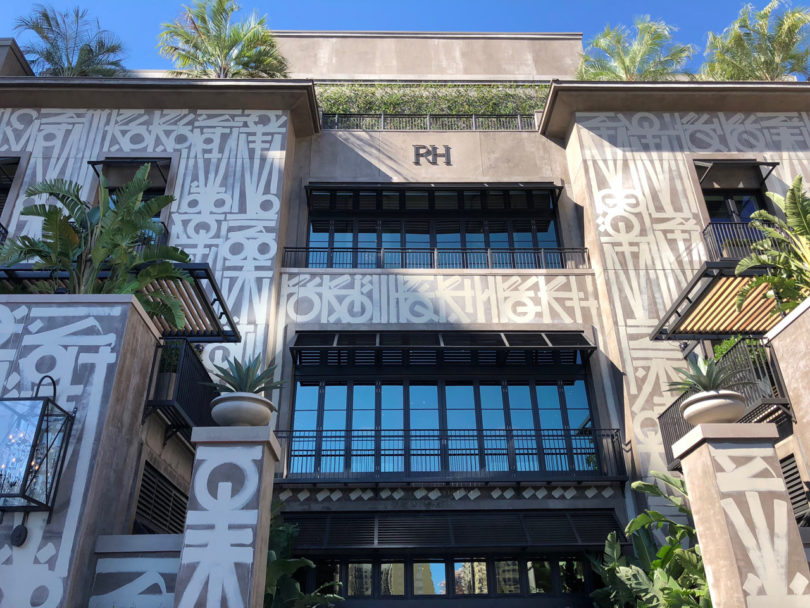 But perhaps the most eye-catching element of all is the building itself. Designed by James Gillam of Backen, Gillam & Kroeger Architects, the gray-tinged structure rises out of the ground with a towering tone-on-tone hieroglyphic-esque art installation as though an archeological dig just unearthed an ancient, lost city. The mural is the creation of Marquis Duriel Lewis, the Los Angeles-based artist better known as RETNA. And fans will be pleased by the authentic manifestation of his stylistic alphabet. “The city wanted us to do something related to art for the community,” says Friedman. “I thought long and hard and wanted to bring Art Basel and Miami to Palm Beach and spice it up a bit. RETNA painted the entire back façade. It’s a great juxtaposition and surprise. I love his work because it’s graphic and architectural.”

Read on for RETNA’s take on street art, his installation for RH, and the role it plays in West Palm Beach’s efforts to integrate public art into the cityscape.

Your moniker, RETNA, came from a Wu Tang song: “Kinetic globes light will then shine, burns your retina.” Why did those lyrics resonate with you?

In graffiti culture, you look to stand out. You have to look for a name that is original that can make an impact. The letters had a good structure, making for strong, elegant shapes. I took the I out of my name. (I like to say I took the eye out so I can be the 3rd eye—everyone has two RETNAs.) Also, my early work was very colorful, and now it’s very monochromatic, representing the cones and the rods of a retina. 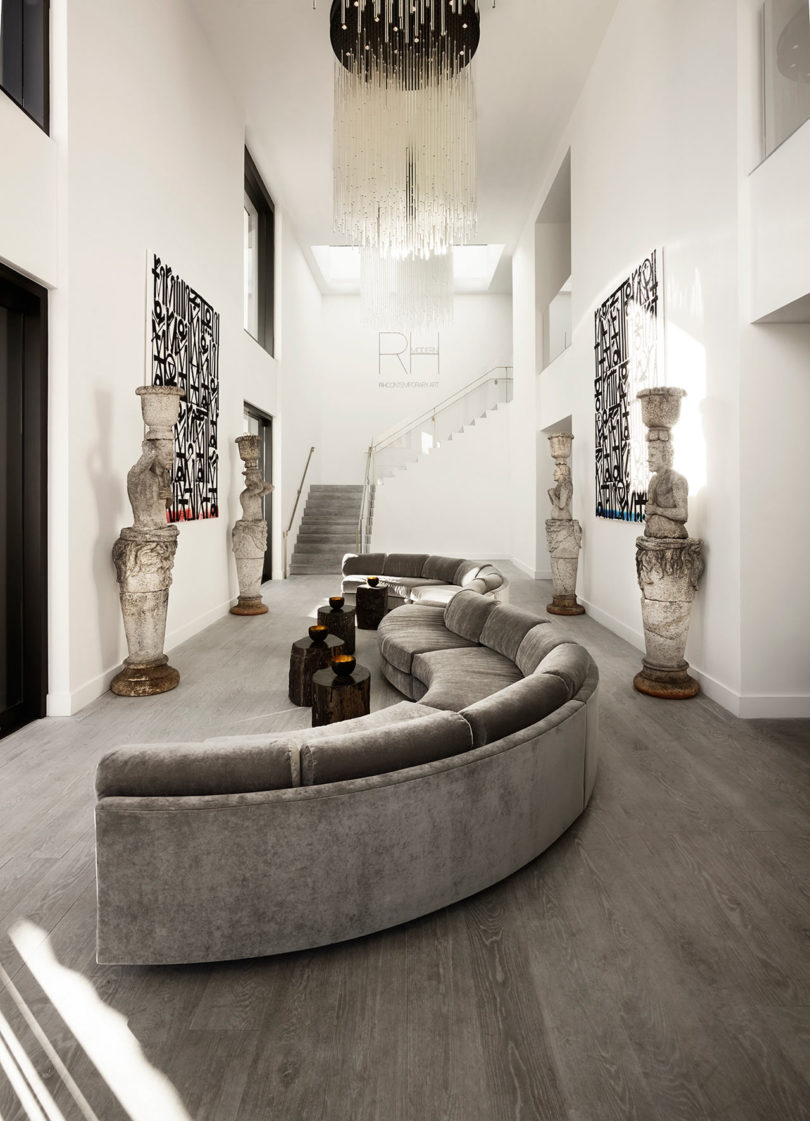 Where do you think the shift from vandalism to contemporary/fine art came into play with graffiti/street art?

That question is probably answered with the contribution of many artists over the years. In the 1980s, you had early pioneers participate in exhibitions at underground venues and it was more closely associated with the hip hop movement. While there were a few breakout artists, the word graffiti held a negative connotation. There are some that practice the tradition that don’t like the word graffiti; they prefer the term aerosol art, as you would identify an oil painter or watercolorist for example. I think in the ’90s—with the crackdown of graffiti in the states, the Buff as we would call it—you saw it spread very far to new heights in Europe where the subway graffiti system was in full swing. The Europeans seemed to embrace it more—that was my observation as they created great materials and had many more varieties of colors to produce more advanced renderings. It seemed like because of the appreciation of the arts in Europe, it was championed a bit more, or so it seemed.

I think we as graffiti writers saw a shift in the game as our movement was a very hierarchal system that really focused on the letters, and those who did not have good style or great aesthetics to the almighty tag, those who did not put up a sufficient quantity of work could not sustain a long career in the traditional graffiti sense. Although the monetary gain was never really part of the goal, the defiant nature was admired by your peers. With that said, a movement was brewing that saw street art phasing in where artists who did images illegally—whether with stencils or posters—gained traction, as the general public could identify with images that were easily recognizable. They did not adhere to the same standards as graffiti writers and a quiet tension arose between the two groups. To many traditionalists, this felt like the rug was being pulled out from under the graffiti realm. I can honestly say I was one of them but instead of complaining about it, I decided to change my position and follow my passion for muralism and design. 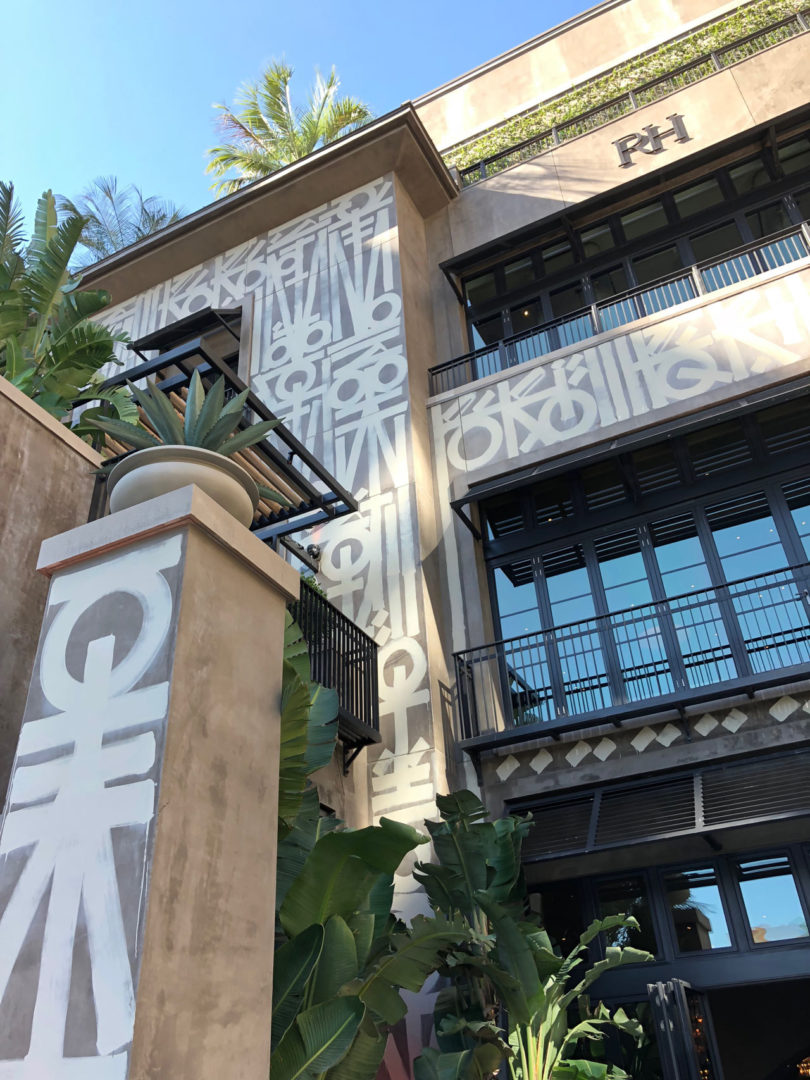 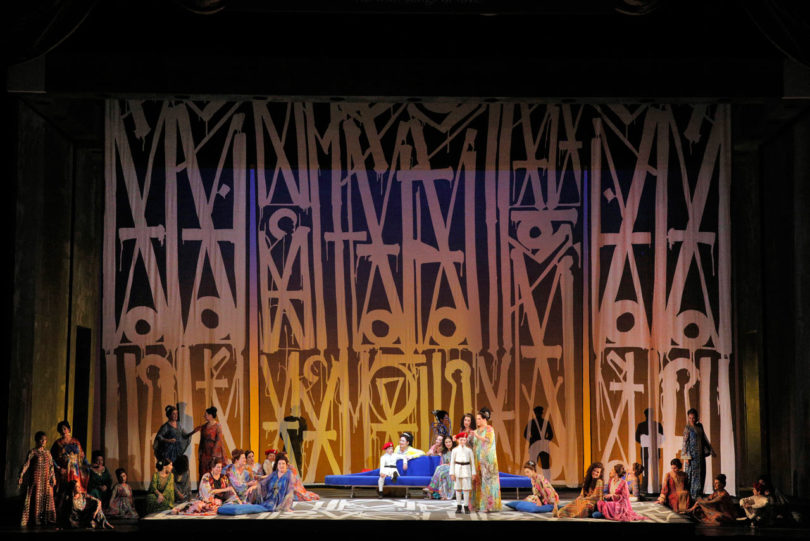 You’ve now designed album covers and opera sets, exhibited in solo shows, major art fairs and museums. Did you ever think you could make this big of an impact with street art when you were a kid?

I think the street art movement helped many outsiders of the culture who would not normally like graffiti or vandalism accept certain aspects of it, and it allowed artists to be accepted and commissioned for greater artistic projects, which range from the examples you mentioned in the question. I always knew the impact of what I was a part of would have a big influence, although I don’t think we have seen the scope of the role it will play just yet. Now you see beautiful murals going up all over the world and the public is starting to understand the key role art plays in the harmony of life’s uplift.

Your artwork is your own type of hieroglyphics/calligraphy. Tell me more about the symbols you use—are they deliberate or more decorative?

It’s my own interpretation of the Latin alphabet, my stylized version of text. The pattern is never the same as each building is unique and I never will write the same quote or phrase. Usually I try to identify what will relate to the area I’m in and what will work aesthetically on the building—I like to accent but still emit the grit in a very elegant way that will resonate with all walks of life. I like to think the building itself plays a role on the structure of the symbols as it has to flow in harmony with the architecture. My work may look decorative to some, which is expected due to the nature of how the work can be viewed, but there is without question an order to the madness. 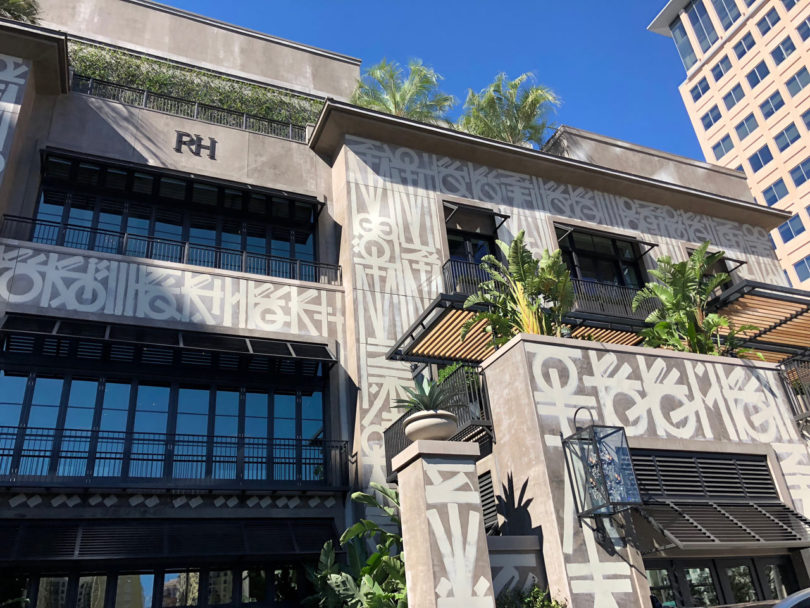 So architecture is a strong influence for you. What else brought you to designing your patterns? And what inspired your mural for RH West Palm?

Architecture does play a fundamental role in my work. When I was a youth, my aspiration was to be an architect. I’m inspired by civilizations of the past—the architecture remains timeless. The sequence of the events I participated in this year and the stylistic approach started with a Southern Pacific building I painted at ROW DTLA in Los Angeles. I created new formations for the letters S and E in my work representing the Union of Family (Male x Male x Female x Female). The S is phallic, representing Man, and the E in its dome-like shape represents the woman. The shape formations started to develop with the Cuauhtemoc building in the Tlatelolco neighborhood of Mexico City—it’s my tallest mural at 21 stories. The work I recently completed at The Kennedy Center played a crucial part as well. And we end this year with Monument, the title of the work at RH West Palm, which represents restoring the planet’s hardware. I wanted to address the idea of reusable energy and materials to better the environment. 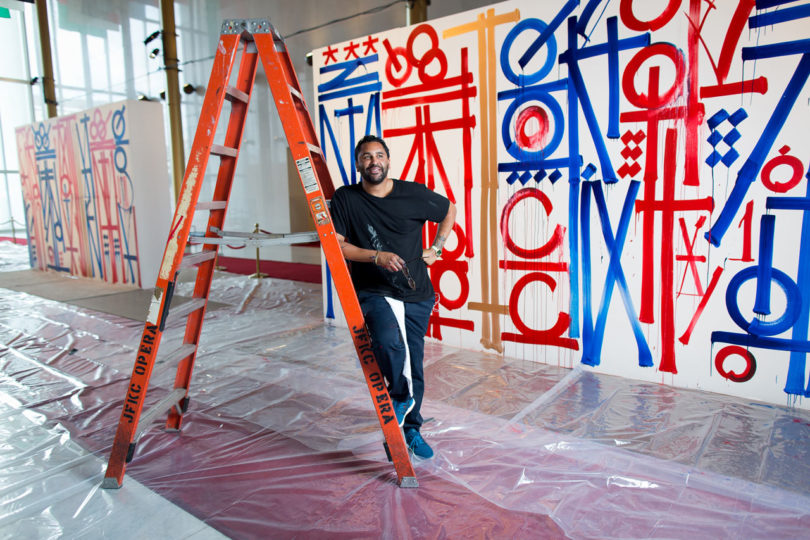 RETNA at the Kennedy Center \ Photo by Scott Suchman for WNO 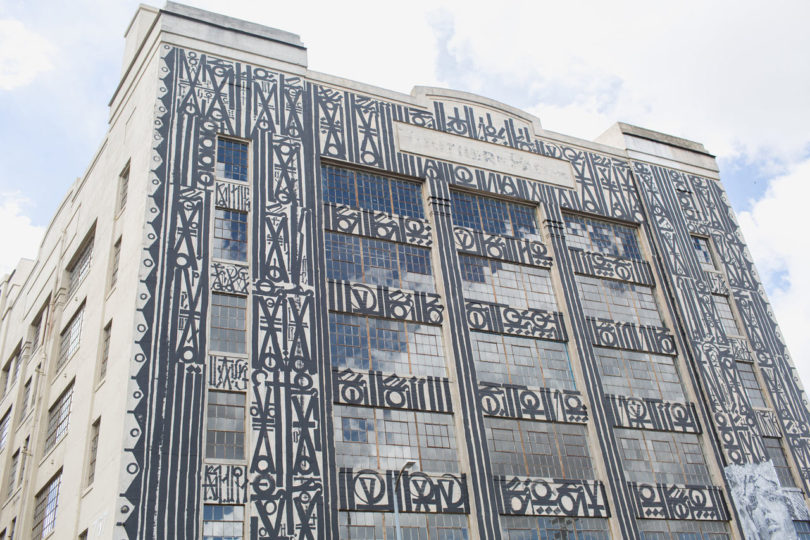 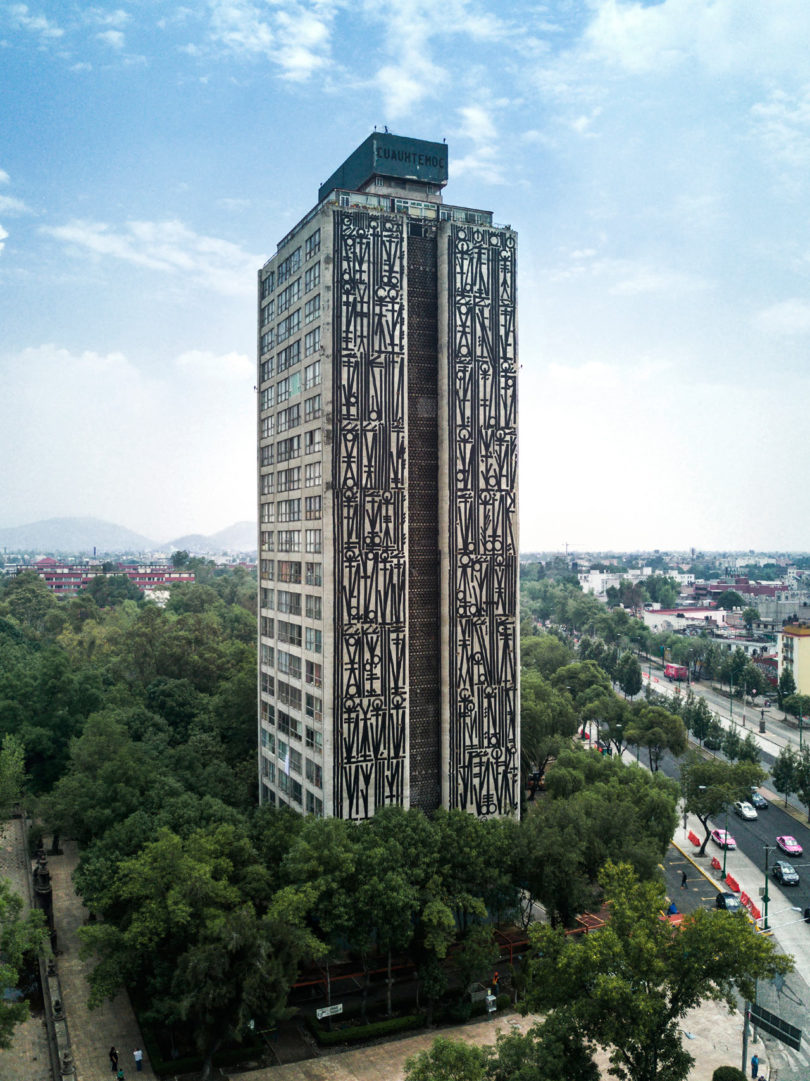 RETNA mural in Mexico City, organized by The Beauty Project

Tell us about your creative process and your partnership with RH.

RH provided an architectural rendering and our team overlaid some of my work onto the building to get a sense of what the scale and color format would look like. I used Liquitex 12-inch freestyle brushes and a roller, and we broke up the wall into four equal parts to get a nice symmetry throughout the façade. The walls are always freestyle in my projects, so the mock-up gives a general idea of what we plan to achieve but I rarely work from a sketch; it’s all done spontaneously. RH is a good partner due their patronage of the arts and the risks they are willing to take to break out of the social norms within the corporate environment. The fact that they commissioned me, a graffiti writer out of Los Angeles who now has broken into the world of galleries, museums and operas but is still grounded on the street art scene like my forefathers Basquiat, Haring and others, is an honor for me and says a lot about RH. This is their flagship store and that speaks volumes.

Monument, the title of the work at RH West Palm, which represents restoring the planet’s hardware. I wanted to address the idea of reusable energy and materials to better the environment.

This mural aligns with West Palm Beach’s public arts efforts. And you’ve also had a presence in Wynwood and the Miami art fairs. What are your thoughts on the South Florida art scene?

The city of West Palm Beach was very accommodating and supportive, along with Gopal Rajegowda from Related, who has been instrumental in the development of the city’s center, which will continue to grow with the work that Nicole Henry Fine Art is doing with her mural program, bringing established and emerging artists to the area. South Florida is a destination for the arts, relaxation, great design, good nightlife, great food, home to many great collections, muses and inspiration, and, of course, the luxury brands that have made South Florida their home for years now. I am grateful to all of the people who have let me perform for them. I think what’s nice about these public projects is that they give access to everyone. The art belongs to the people and let’s hope they enjoy it as much as we do.