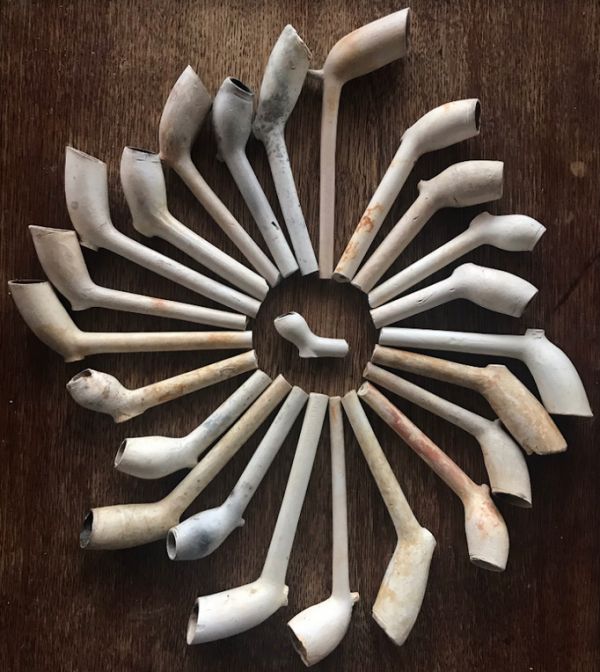 The River Thames in London is a treasure trove of historical artifacts, and there are plenty of people whose hobby involves looking for those artifacts between the high and low tide marks. This activity is called mudlarking. It began as a way for the poorest of the poor to find something worth selling, but now attracts those with an interest in history as told by the objects people left behind. Lara Maiklem has been mudlarking all her life, as she details in her book Mudlark: In Search of London’s Past Along the River Thames. Maiklem explains why the Thames is such a rich depository for items lost or discarded over thousands of years.

“There are lots of reasons for all the stuff in the river. Obviously, it’s been used as a rubbish dump. It was a useful place to chuck your household waste. It was essentially a busy highway, so people accidentally dropped things and lost things as they traveled on it. Of course, people also lived right up against it. London was centered on the Thames so houses were all along it, and there was all this stuff coming out of the houses and off the bridges. It was the biggest port in the world in the 18th century, so there was all the shipbuilding and industry going on.

“And then of course, there’s the rubbish that was used to build up the foreshore and create barge beds. The riverbed in its natural state is a V shape, so they had to build up the sides next to the river wall to make them flatter so the flat-bottom barges could rest there at low tide. They did that by pouring rubbish and building spoil and kiln waste, anything they could find—industrial waste, domestic waste. When they dug into the ground further up, they’d bring the spoil down and use it to build up the foreshore, and cap it off with a layer of chalk, which was soft and didn’t damage the bottom of the barges.

“One of the reasons we’re finding so much in the river now is because there’s so much erosion. While it was a “working river,” these barge beds were patched up and the revetments, or the wooden walls that held them in, were repaired when they broke. But now, they’re being left to fall apart, and these barge beds are eroding as the river is getting busier with river traffic.

“Every tide, something new will turn up, and the contents date right back to Roman times in central London. When they dug cellars or basements in the 18th and 19th centuries—this is when they created the barge beds—they’d dig down into medieval Roman layers, and then bring that spoil down to the river to build up the barge beds. So that’s possibly why we’re finding Roman objects next to Victorian objects next to Georgian objects. Such a mess of history in there.

“The beauty of the Thames is that it’s muddy and anaerobic, so if something falls into the mud, it’s preserved as perfectly as the day it fell in. It’s not too acidic, it’s not too alkaline, and no oxygen gets to it, which means there’s no degradation at all. It’s like suspended animation until you find it—it’s not like finding things in fields or archaeological digs. What we’re pulling out of the mud is pristine: Sometimes you’ll pull a pin out, and it’ll still be shiny, or you’ll find coins that have absolutely no damage on them at all, like they fell out of someone’s pocket yesterday. It’s incredible. Centuries-old leather and wood and even fabrics have been found, which is quite incredible. The key is, though, getting to it before it washes away or it starts to erode. The wave action starts to damage these objects.”