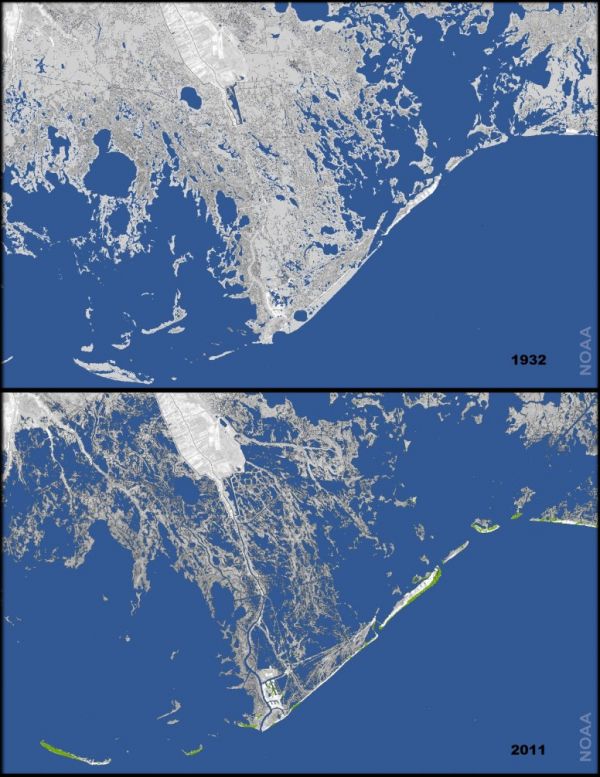 In the Cretaceous period, the Gulf of Mexico stretched up into the middle of North America. Water drainage from the highlands filled the gulf with sediment, until it formed the Mississippi River Basin. The river continues to carry sediment south into Louisiana, but it no longer stops there. For 300 years, people have been trying to control the Mississippi in order to protect the valuable river traffic and sea port, and even more so since the oil industry discovered crude in the Gulf. Now the Mississippi is penned in by levees, disrupting nature’s cycle of flooding and land-building.

Here, in black and white, was Louisiana’s land-loss dilemma. Had the river been left to its own devices, a super-wet spring like that of 2011 would have sent the Mississippi and its distributaries surging over their banks. The floodwaters would have wreaked havoc, but they would have spread tens of millions of tons of sand and clay across thousands of square miles of countryside. The new sediment would have formed a fresh layer of soil and, in this way, countered subsidence.

Thanks to the intervention of the engineers, there had been no spillover, no havoc, and hence no land-building. The future of southern Louisiana had, instead, washed out to sea.

Today, Louisiana is losing “a football field’s worth of land every hour and a half.” There is a plan to stop the subsidence by diverting sediment before it reaches the sea, but it may be too little, too late. Read about the plight of Louisiana’s land at the New Yorker. -via Metafilter