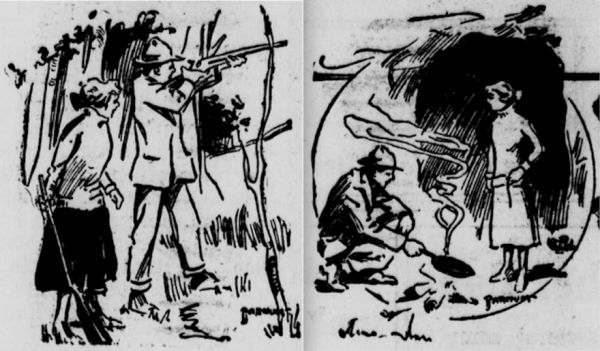 In 1910, 17-year-old Beatrice Sanders went to a drug store in Newark, New Jersey, for an ice cream sundae and was entranced by the young soda jerk who served her, 17-year-old soda La Vere Tallman. She returned to the soda fountain again and again, and the two fell in love. Beatrice’s parents objected to the romance, so much that they sent her to school at a seminary to keep the couple apart. But they corresponded by mail, and hatched a plan to run away together. La Vere knew of a cave in the Catskills where they could go live. He’d bring guns and fishhooks and utensils, and they would live off the land, away from their parents prying eyes.

It was just the finest cave imaginable, too. A great, big regular robbers’ cave. Why, Captain Kidd himself would have pounded upon it in glee as a bully hiding place from policemen, and might have hid a million dollars in bullion and diamonds in the big black hole that led off to—no one knows where—from the southeast corner.
– The Spokane Press, December 12, 1910

Beatrice and La Vere fled to their cave in September and lived there for “many happy weeks.” They both kept diaries of that time, which later made it into the newspapers. But the teenagers didn’t plan for winter weather, and the cave eventually got rather cold. They would have to return to civilization, if not to their families. Read the story of the teenagers who lived in a cave, which was really just the beginning of their adventures, at Second Glance History, part one and part two. -via Strange Company