This exhibition showcases the remarkable eight-decade career of ninety-nine-year-old artist Luchita Hurtado. Born in Maiquetía, Venezuela, in 1920, Hurtado moved to New York to live with her mother at the age of eight. An independent spirit from a young age, she chose to attend the all-girls Washington Irving High School in Manhattan to study art, unbeknownst to her family, who believed she was studying to be a dressmaker. By her early twenties, Hurtado was making art consistently, a habit she would later describe as “a need, like brushing teeth.” Yet for many years, this art-making took place mostly in private—at night, after her children were asleep, or in makeshift studio spaces as small as a closet.

Hurtado, who is still active as an artist, developed her fiercely original practice almost entirely independent of mainstream styles and movements. Hallmarks of her work include forays into abstraction, experiments with language, engagements with nature and ecology, and, most significantly, a persistent recourse to self-portraiture and the human figure. Some of these motifs reappear in multiple bodies of work or in combination with one another. Throughout her paintings and drawings, Hurtado consistently plays with the possibilities of line, color, pattern, and form.

Although she is truly a citizen of the world (having lived in Venezuela, the Dominican Republic, Mexico, Italy, and Chile, among other places), Hurtado has primarily resided in Santa Monica since the early 1950s. It is especially fitting that LACMA, with its dual commitments to presenting the history of art in Southern California and championing the work of women artists, now has the opportunity to share Hurtado’s work with her hometown audience. 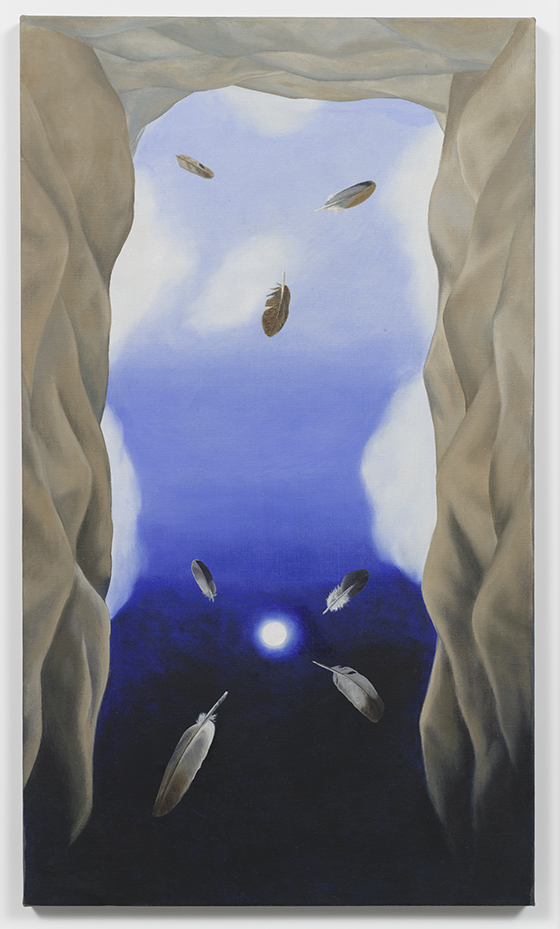 The Umbilical Cord of the Earth is the Moon, 1977

Hurtado has spoken of the feather as a mysterious symbol, one that retains a kind of magic through its apparent weightlessness. In some of the paintings here, feathers appear to float up to the sky, sometimes coming together to suggest facial features or figures. 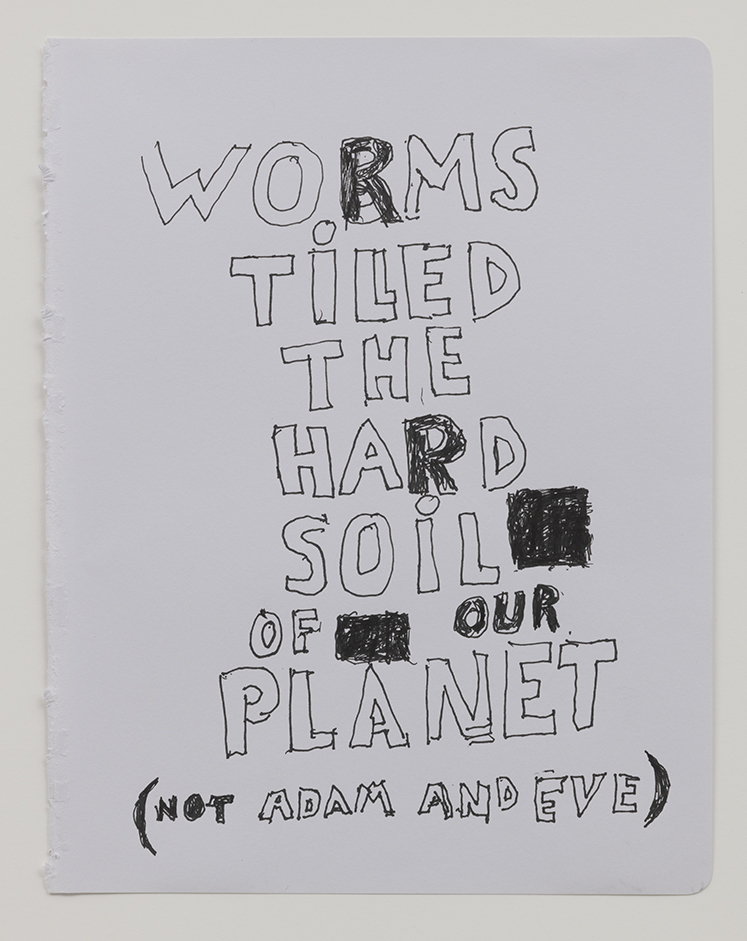 The earth, particularly humans’ connection to nature and the cosmos, has been an important subject for Hurtado ever since she saw the first photograph of Earth taken from space. She has returned to themes of environmental activism and ecological awareness in recent work.

In this “sky skin” painting, Hurtado composed the shape of the sky to resemble a stretched animal skin. The palette of Mascara and related canvases were no doubt informed by the sky and landscape colors of her surroundings; she documented several of her paintings against the backdrop of Taos, New Mexico, where one can see the same combination of blue skies and earth tones as in the canvases themselves. 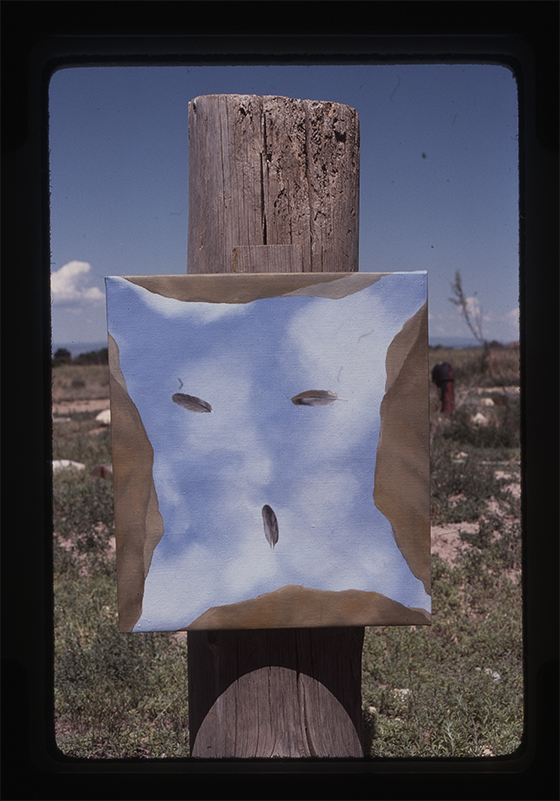 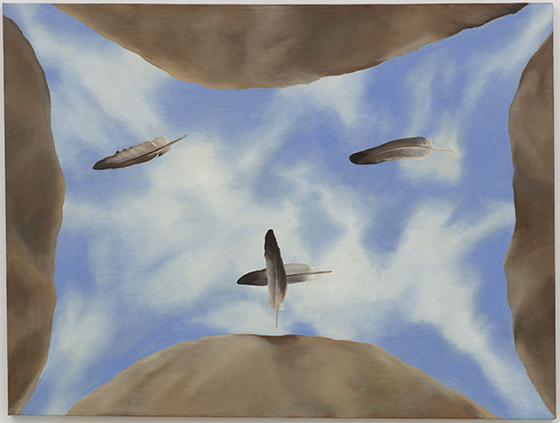 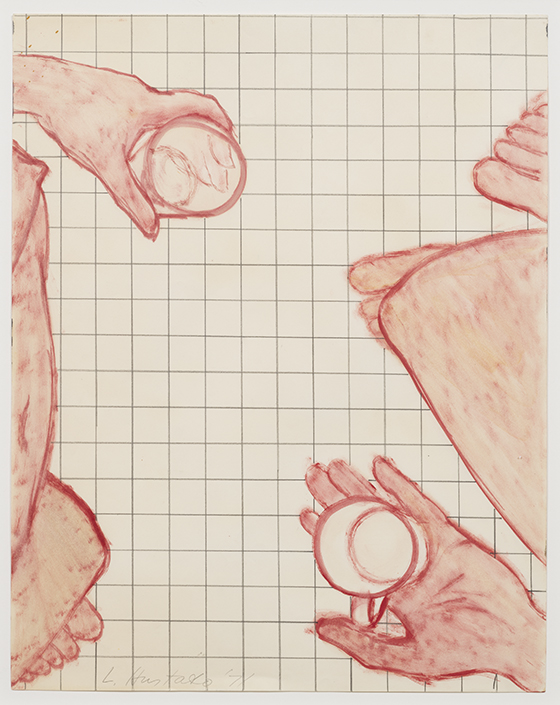 In the late 1960s, Hurtado began painting self-portraits from the vantage point of the artist looking steeply downward at her own body. In some paintings we see only her feet, knees, and hands; in others we also see her breasts and bare stomach. Hurtado often poignantly incorporated everyday objects—a toy car, ball of string, potted plant, drinking glass—into her compositions. Such works hint at a painting practice faithfully maintained during moments carved out from domestic family life.

Hurtado made this print at the invitation of her friend June Wayne, founder of Tamarind Lithography Workshop. Wayne famously questioned Hurtado about the use of her married name during the first meeting of the Los Angeles Council of Women Artists in 1971. As the story goes, Hurtado introduced herself to the group as “Luchita Mullican.” Only when challenged, “Luchita what?” by Wayne, did she proudly answer, “Luchita Hurtado.” In a recent interview with Hans Ulrich Obrist, Hurtado recounted, “It became very important in my life to remember that name.” 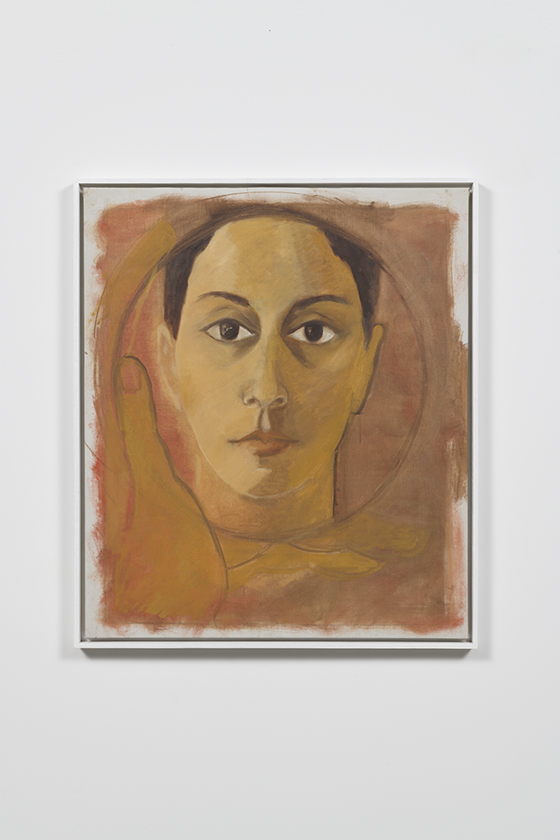 Whereas the paintings on the opposite wall are all composed from the perspective of the artist looking down at her body, the works on this wall showcase Hurtado’s experiments with her silhouette as a compositional element. We also see examples of Hurtado’s more conventional self-portraits, in which her solemn face looks directly out at the viewer. 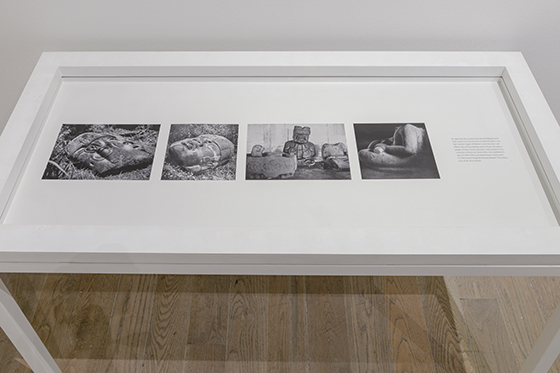 In 1946, Hurtado traveled with artist Wolfgang Paalen (who would soon become her second husband) to the San Lorenzo region of Mexico to see the Aztec and Olmec sites of Tenochtitlan and La Venta. Her photographs of Olmec heads and other archaeological relics, a selecion of which are shown here, were published in 1952 in Cahier d’Arts, accompanying an article titled “Le Plus Ancien Visage du Nouveau Monde” (The Oldest Face of the New World). 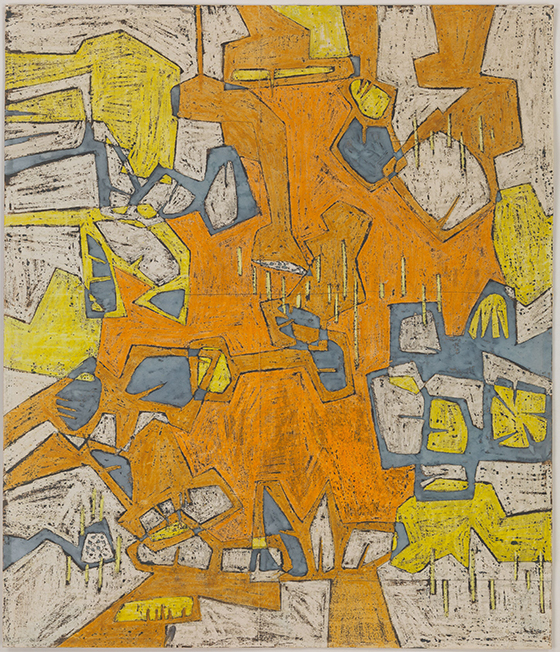 The biomorphic forms and abstract shapes in Hurtado’s early works evoke a range of associations, from neolithic figurines to prehistoric rock art and automatic drawing techniques. During this period, Hurtado regularly worked in crayon, using a method called “ink resist.” For this technique, an ink wash is applied over areas rendered in crayon; because of the water-repelling properties of the waxy crayon, the ink permeates the paper only between the colored strokes. As one can see in the examples on view here, the contrast between dark ink wash and colored hues creates a dense and vibrant energy.

This drawing, composed of eight strips of cut and reassembled paper, anticipates the much larger cut and resewn canvases Hurtado made in the 1970s. 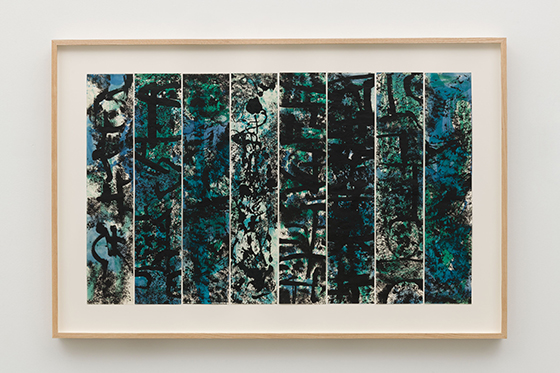 In its formal composition, this drawing references the folded-arm figures of ancient Cycladic art, like the one Hurtado documented in the sketch-book drawing at left. 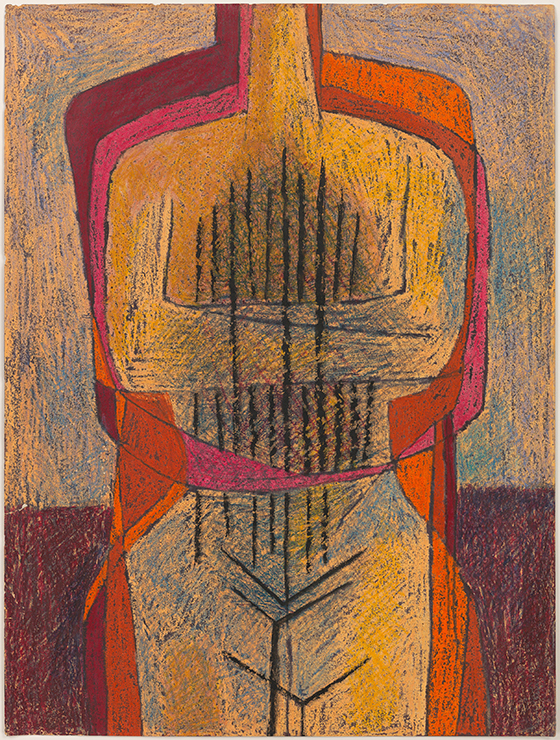 Hurtado’s handwritten observation on this page of her notebook demonstrates her keen attention to human figures and figure relationships across the history of art. 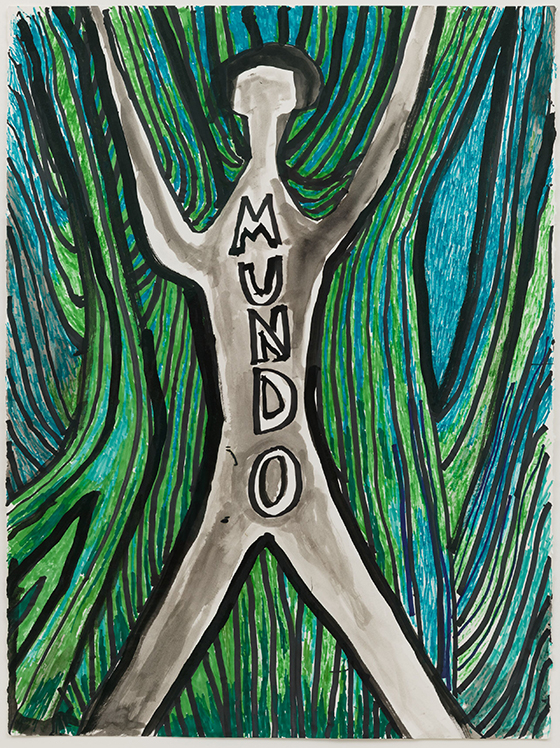 Throughout her career, Hurtado has continually returned to the human figure and figure relationships. In the works on view in this section of the gallery, spanning from the 1950s to the present, we see bodies alone and in different states of interaction—figures embracing, Mother Nature as a figure, and, in recent works, images of birth.

To make this work, Hurtado traced the outlines of herself and her youngest son, John, then age four.

Hurtado often depicted herself with objects from her surroundings. This detailed interior scene, although not a conventional self-portrait, offers an intimate glimpse of the rich collection of art and artifacts she and her husband Lee Mullican lived with at home. 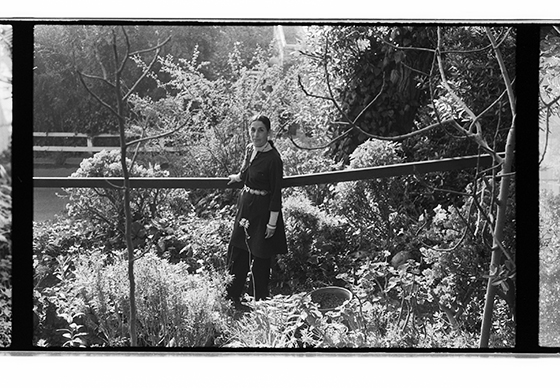 Hurtado in the garden of her home on Mesa Road in Santa Monica Canyon, 1973

These works represent a small selection of the numerous plant drawings Hurtado has made in her lifetime, and document her deep engagement with the natural world. In them we see samples of the weeds, flowers, and trees of the Santa Monica Canyon and of Taos, New Mexico, where Hurtado and her late husband Lee Mullican built a house in the 1970s and regularly spent summers. 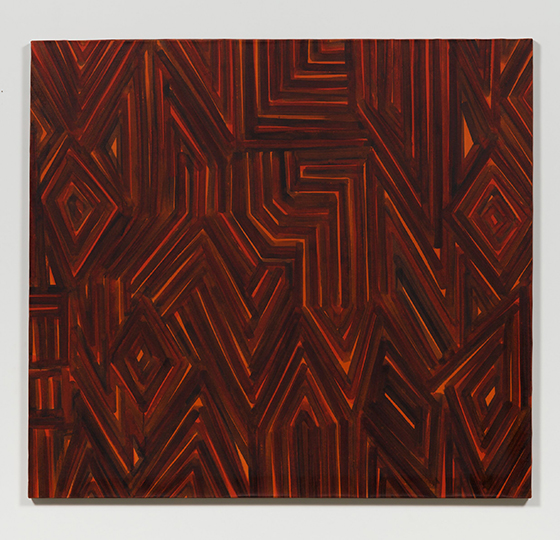 Although Hurtado’s art practice took place mostly in private for almost eight decades, the one exception was in 1974, when she exhibited a group of large-scale paintings at the storied Woman’s Building in Los Angeles. The paintings here—a partial reconstitution of the works from the 1974 show—appear at first to be geometric abstractions, but most contain embedded words and phrases. Some of the canvases Hurtado cut into strips, reconfigured, and stitched back together again. The artist has explained about the genesis of these paintings:

I did many self portraits. And then at one point I decided I would use letters, and I did…. I started with a portrait that said, “I am.” And I decided that was as much me as my real face and figure. And so at one point I began then to write things. And I decided to cut them up and make them even more unlikely that you’d ever read what I had written. I accomplished that by cutting the painting into strips and then sewing them, and then stretching them.

Title (Old. Will be deleted soon)
Couple with Offsprings, 1973
Stop

The corner installation of this work is based on archival photo documentation of Hurtado’s 1974 exhibition at the Woman’s Building in Los Angeles. 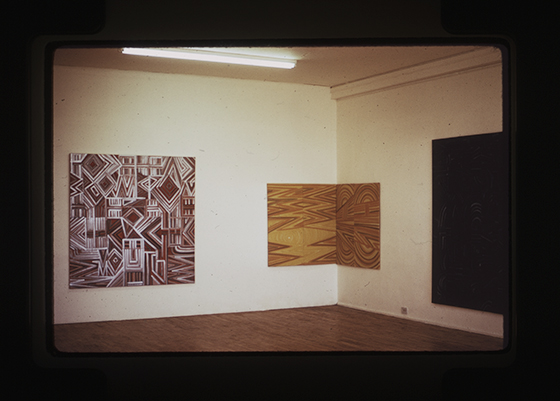 Title (Old. Will be deleted soon)
Self Portrait, 1973
Stop

Embedded in the composition of this painting are the words that inspired the title of this exhibition: “I Live I Die I Will Be Reborn.” The photograph below shows the painting’s cut strips of canvas before Hurtado sewed them together. 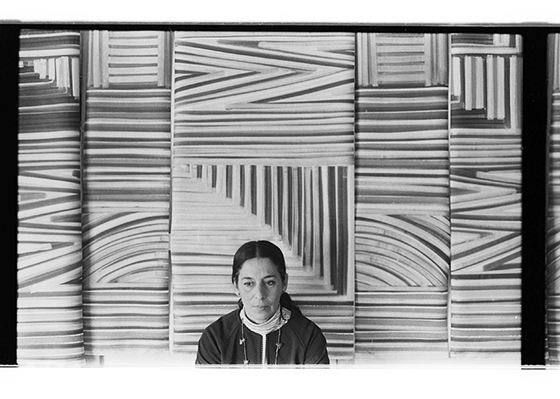 Hurtado in front of Self Portrait in progress, 1973
Photo by Matt Mullican 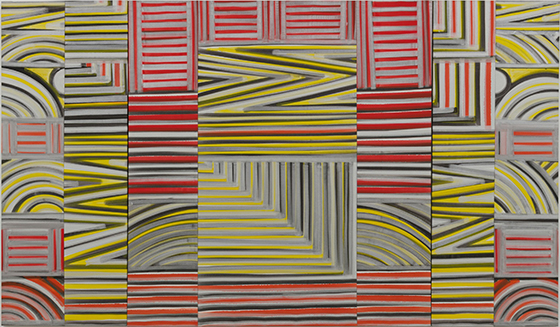 In this painting one can see the overlap of several major themes in Hurtado’s work: language-play, birth, and self-portraiture (the forms at the bottom of the canvas suggest the artist’s first-person perspective looking down at her own body). 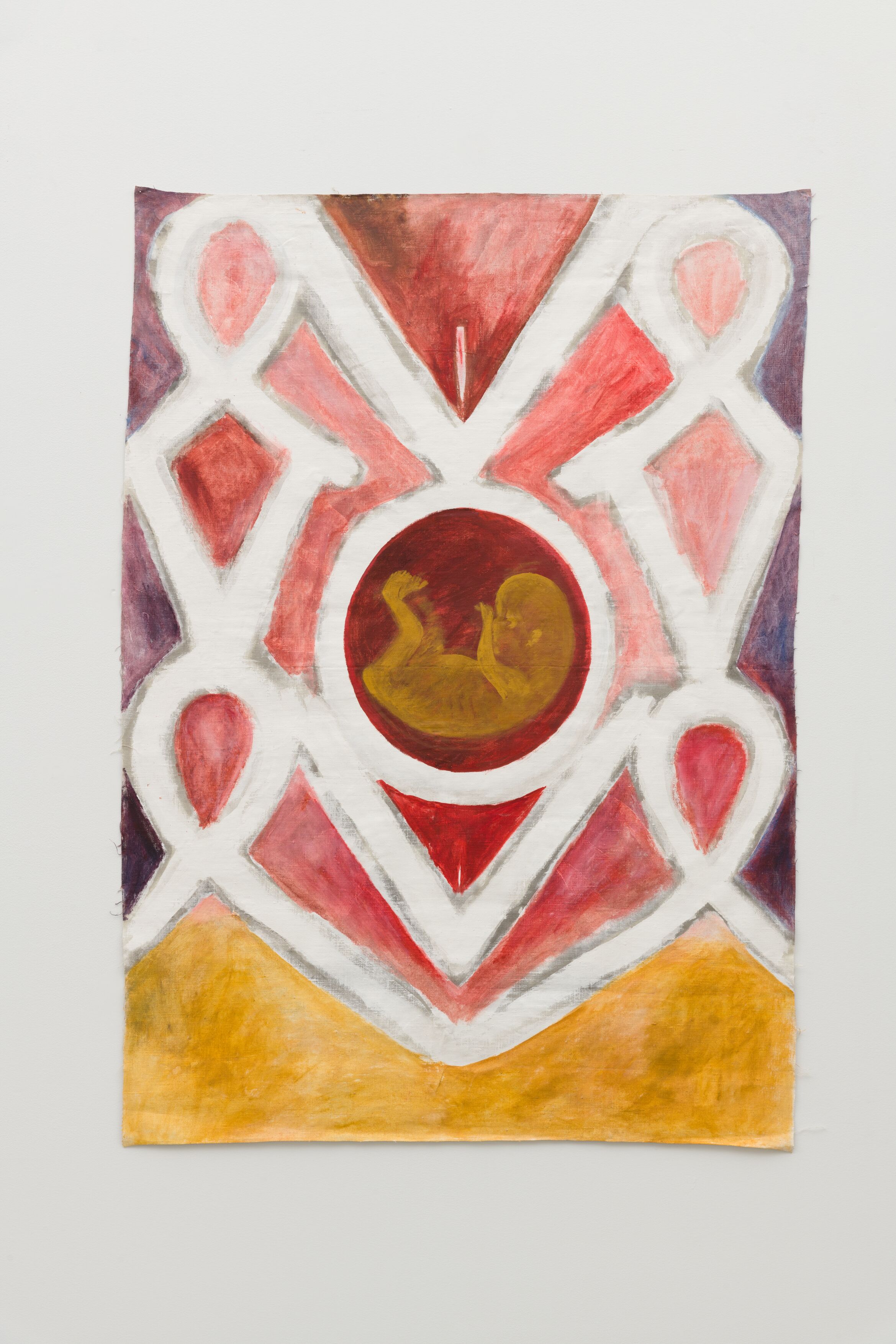 This exhibition was organized by the Serpentine Galleries (London), in association with the Los Angeles County Museum of Art. 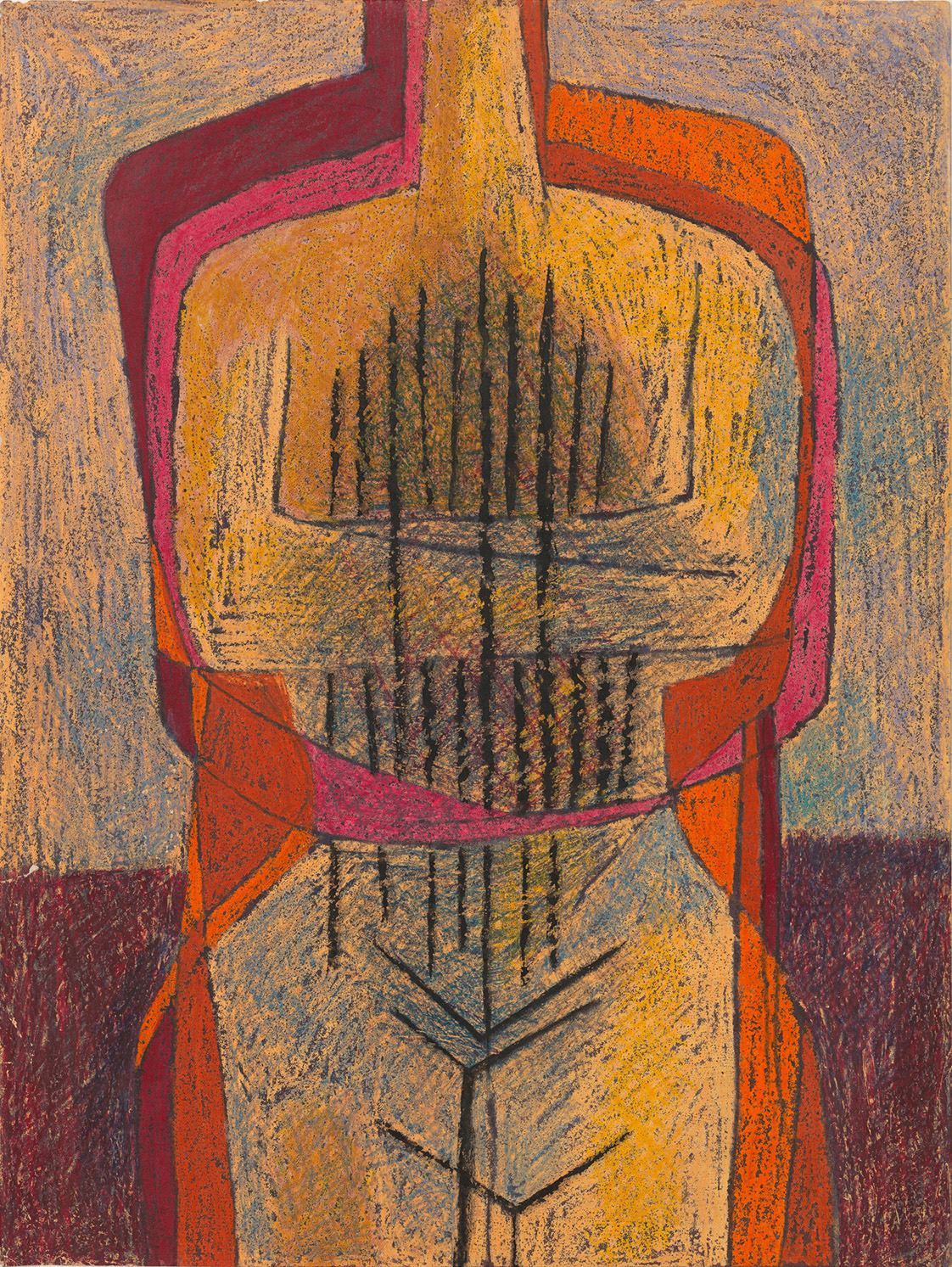 Film Screening—Supernova, and a post-screening conversation with writer and director Harry Macqueen and actors Colin Firth and Stanley Tucci