Every culture has their own unique traits, traditions and customs. Depending on where you are from, you might think it’s rude to loudly slurp your soup, use your left hand to point things out or gift someone an odd number of flowers. And while every country has their own way of doing things, there are certain customs that are more common in western cultures and others that are more popular in the east.

If you’ve only lived in one part of the world, as many of us have, you might not be familiar with the customs on the other half of the globe. But as someone who has lived in two very different places, one Twitter user recently started a conversation noting things people in western cultures often do that she finds bizarre. She then invited others to share customs they have observed in western countries, so we’ve gathered some of the most fascinating responses down below. 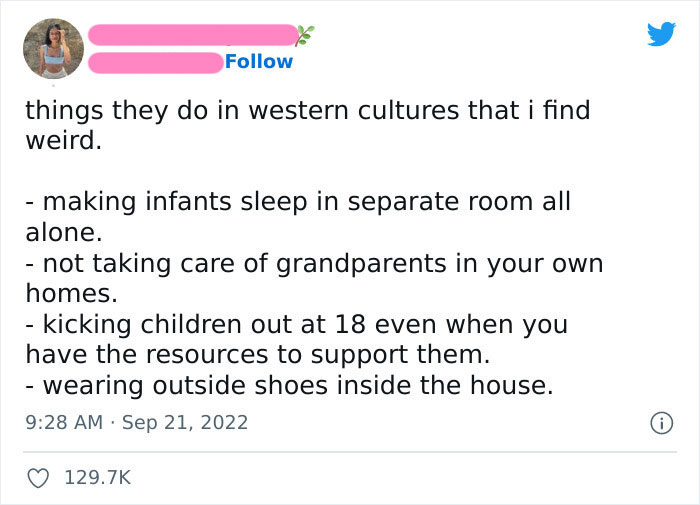 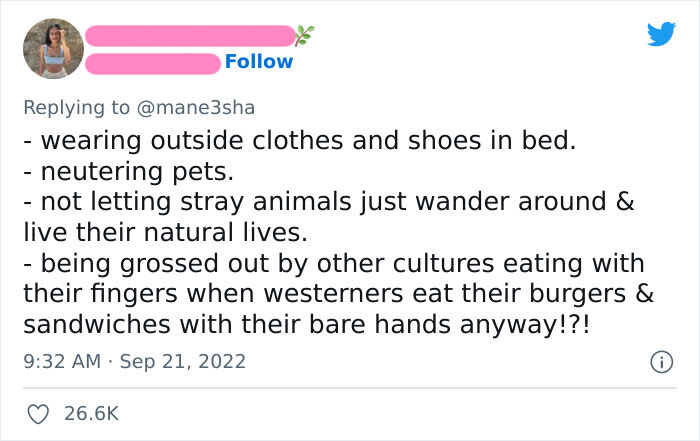 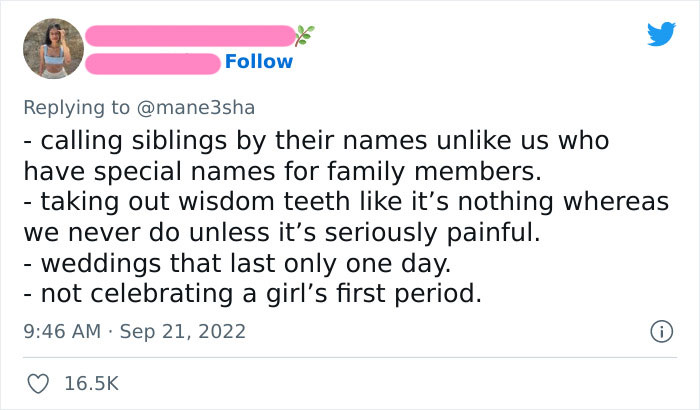 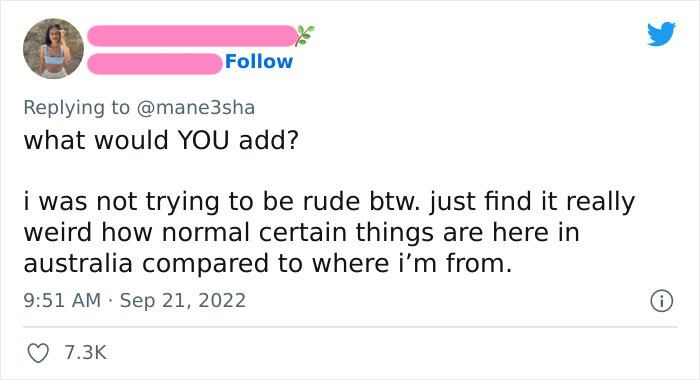 Now, we cannot blanket statement the entire world into two halves, assuming that all western countries are the same and all eastern countries are the same. Even one nation should not be viewed as a monolith. But the tweets featured on this list are simply observations that some individuals have made about cultural differences between where they are from and another place they have visited or lived in. So to help understand where these people are coming from, I consulted Ian Paul’s blog post on his website Psephizo, “Why is Western culture so WEIRD?”

Ian pulls quotes from anthropologist Joseph Henrich’s book The Weirdest People in the World: How the West Became Psychologically Peculiar and Particularly Prosperous and explains how many western ideals are incongruent with how humans historically behaved. “They tend to have certain features in common—an individualistic sense of identity and purpose, weak ties to extended family, a universal sense of morality with guilt as a means of social control, less obedience to elders and tradition, not marrying blood relatives, and more trusting of people outside your own family,” Ian explains. 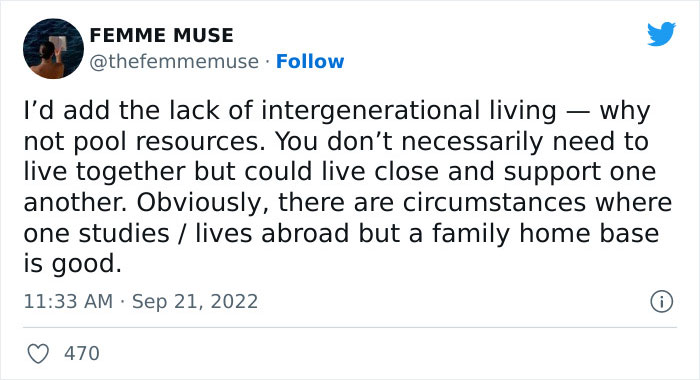 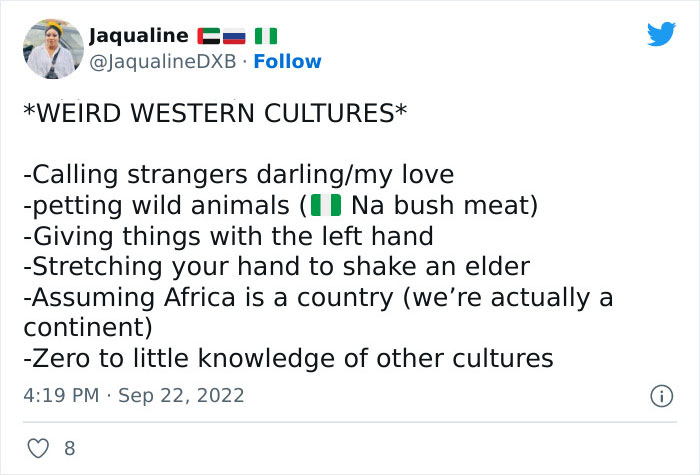 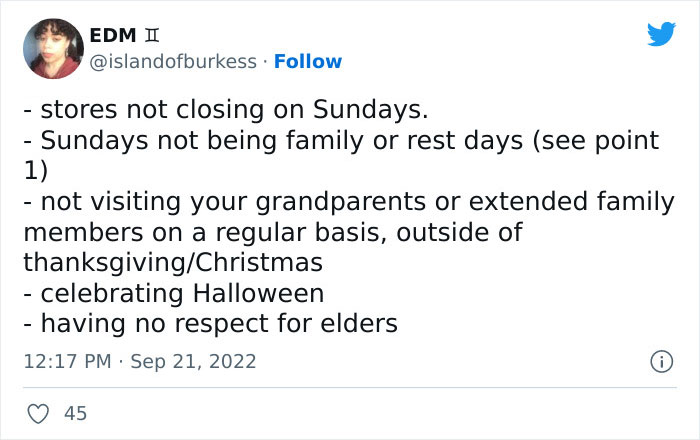 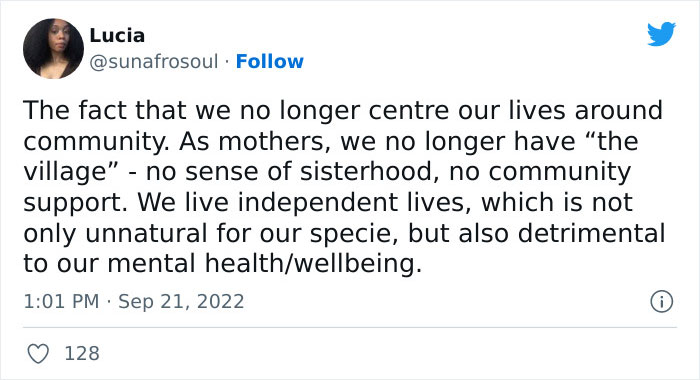 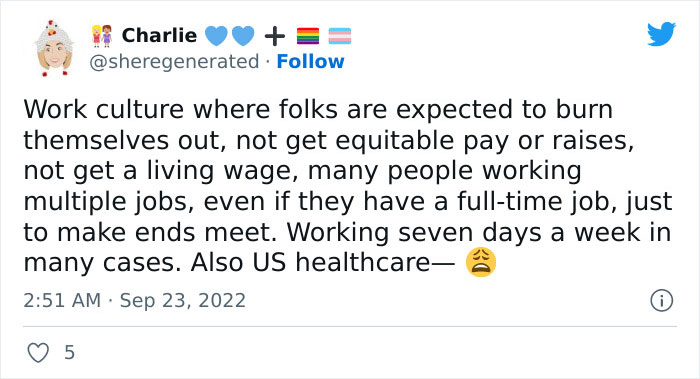 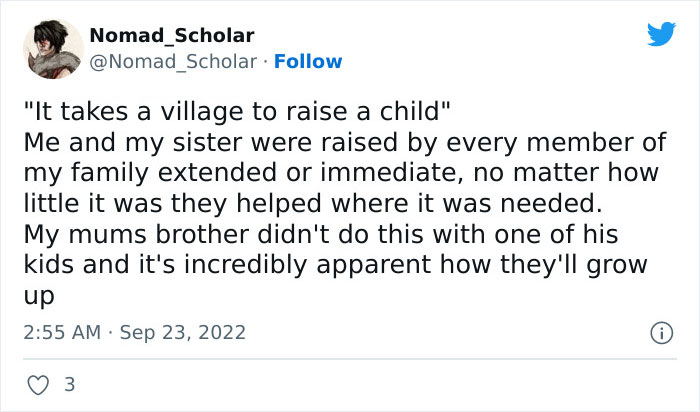 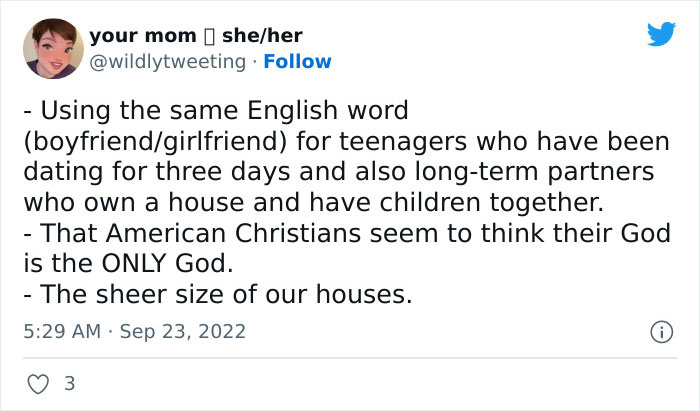 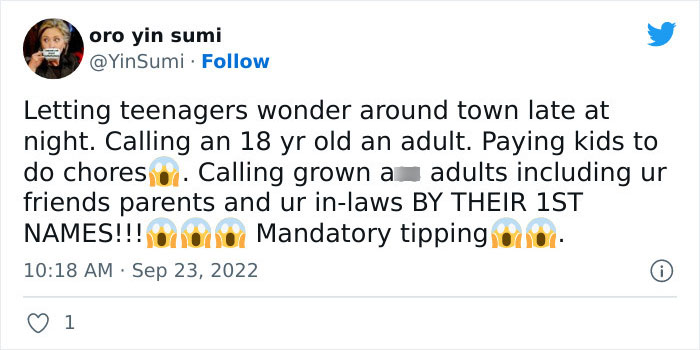 In his book, Joseph Henrich describes the “weirdest people in the world” as WEIRD: Western, educated, industrialized, rich and democratic. He notes that these people tend to define themselves by how they view themselves personally, valuing their abilities and aspirations. Whereas a person from an Eastern culture might be more likely to describe themselves in reference to their social relationships. “I’m Sara’s mom” or “John’s father”.

Henrich explains in his book that there is not one way of describing ourselves that is superior, as the WEIRD way may be too individualistic but the alternative, valuing family and community first, might limit individuals and make them feel constrained in their society. Being a WEIRD person is not necessarily a bad thing, as it encourages prosocial behavior and breeds innovation, meritocracy, trust, representative government and even patience and restraint. Henrich cites examples of WEIRD individuals doing things to benefit the greater good, such as donating blood, agreeing not to park illegally, being willing to report  their own family members to the police and more.

There is certainly a trade-off to accepting more western ideals. Traditionally, eastern cultures have greater respect for their elders and exhibit more hospitality. Being more involved in a community and less focused on individual needs means people have a greater safety net when they need help. I’m sure you’ve heard the phrase “it takes a village” before, right? Well, it used to take a village to raise children or run a household. And in some countries, it is seen as perfectly normal for an adult to live with their parents until they get married, even if they are approaching or past 30 years of age. In fact, one study found that 75% of adults in Hong Kong between the ages of 18-35 still live with their parents. This could be due to cultural customs or due to the fact that Hong Kong is one of the world’s most expensive cities, but regardless, these numbers would not be as common in a western nation.

Sometimes, eastern and western countries even have different views on things as simple as communication (or perhaps it’s not so simple). For example, in western cultures people are often expected to say exactly what they mean without having to read between the lines. They may sugarcoat the message a bit to seem more polite, but they don’t often leave much ambiguity or room for interpretation. The opposite is true in some eastern cultures, however. Countries like Japan and China are considered “high-context cultures”, meaning that indirect, non-verbal communication is extremely important. And being straightforward when speaking is often avoided, as to not “lose face”.

Hierarchy is typically viewed differently by people in the east and west as well. Western nations tend to be more egalitarian, promoting independence and individualism. On the other hand, eastern cultures tend to put an emphasis on social structures. Everyone is expected to respect the order of things, especially in the workplace. “A Western employer would like his or her employees to show initiative and show their own personal skills,” Absolute Internship explains on their site. “On the other hand, an Asian leader will focus on collective achievements and will expect his or her employees to respect the hierarchical structure of the company by being loyal to the company and working as a group.”

Punctuality is also valued to varying degrees depending on where you are in the world. It’s important to be on time regardless of where you are, but “on time” might mean something different to everyone. For example, if you’re working in Spain and your day starts at 9am, it might be no big deal to roll in at 9:25am. As long as you make all of your meetings and finish all of your tasks on time, there shouldn’t be any issues. In Japan, on the other hand, being punctual is extremely important. In fact, when trains are delayed, the railway staff will hand out ‘train delay certificates’ that workers can show to their employers if they end up being tardy.

We understand that many of the examples on this list are generalizations, so they may or may not apply to you, regardless of where you are from and where you currently live. But I know we have pandas from all over the world, so please be mindful of that and stay respectful in the comments. Then feel free to let us know down below what other cultural differences you have observed while visiting or living on the other side of the world.

Some people, on the other hand, explained why they disagreed with some of the points made 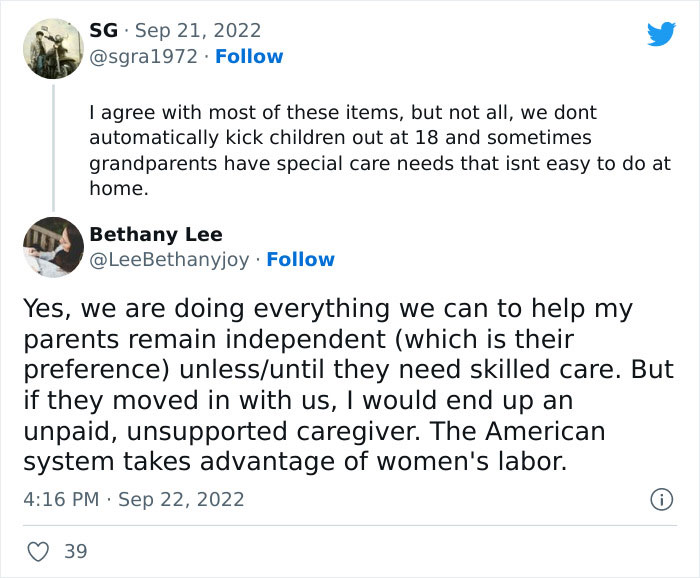 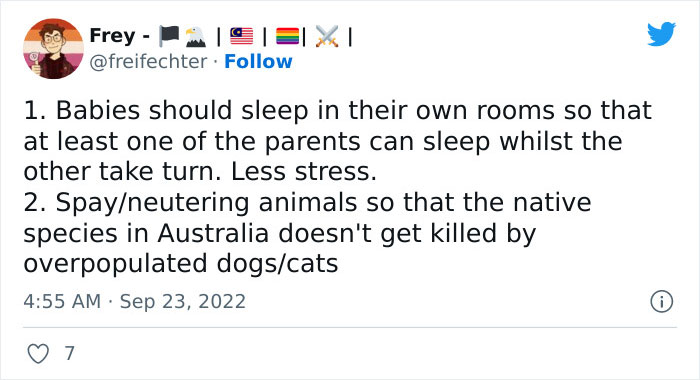 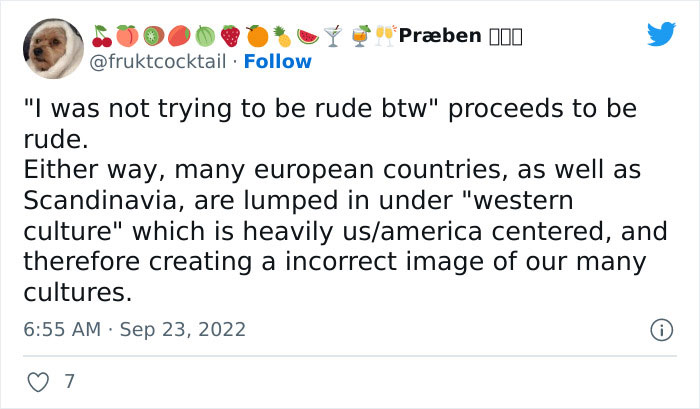 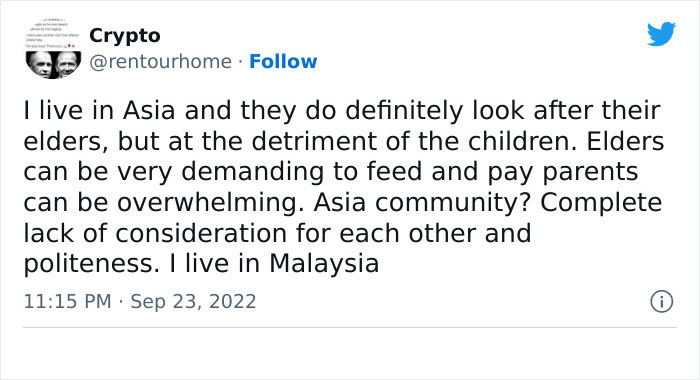 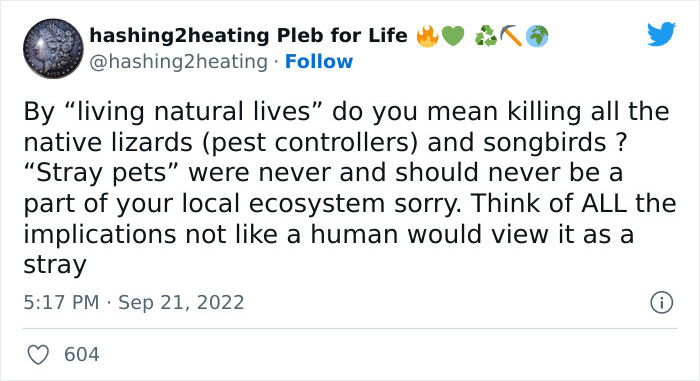 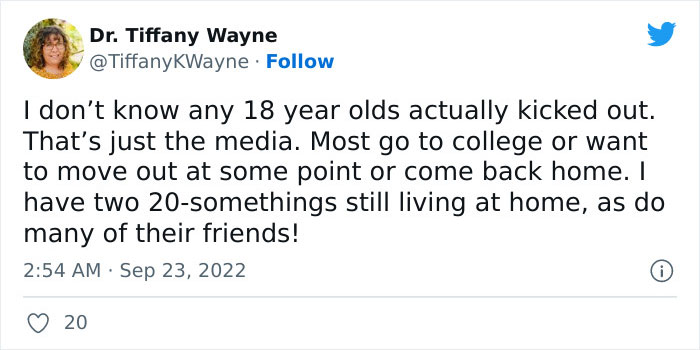