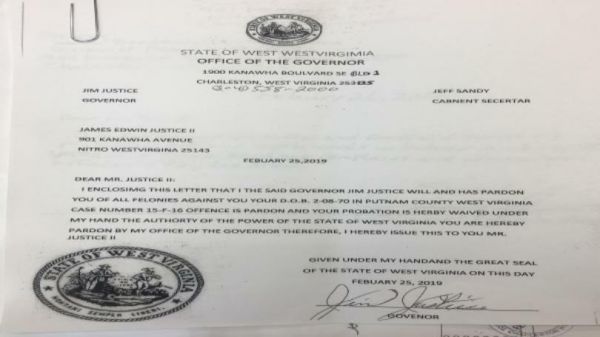 A warrant has been issued for James Justice II of Nitro, West Virginia, accusing him of forging the governor’s signature on a fake letter pardoning him of all felonies. The letter is notable for its numerous grammar and spelling errors.

The fake letter also included a motion to dismiss Justice II’s upcoming probation hearing regarding a past burglary conviction.

The Governor’s office says Governor Justice did not grant a pardon to Justice II.

Justice II is being charged with forgery of public record and forgery of official seals.

In case the news article seems confusing, you will be forgiven. The accused is named James Justice II (he must’ve thought James Justice Jr. was overkill), and the name of the governor of West Virginia is also James Justice. They are not known to be related to each other. -Thanks, WTM!