One of the most commonly heard things when it comes to becoming a parent—say goodbye to sleep! Babies aren’t used to our modern ways of life, with eight hours of sleep, then three whole meals per day, two hours of TV, and so on. They’re barely used to living as is, and it’s the parents’ responsibility to teach them the works.

That of course takes a sacrifice of one’s old routines and realities; however, finding balance is an art set on communication. One couple seemed to be struggling with that, as the man took to the r/AmIthe[Jerk] subreddit to figure out whether he was in the wrong for refusing to wake up to help care for their baby due to his work commitments.

It’s an interesting one for sure, so stick around to the end to see what the internet community had to say about it all, and leave your own opinions down in the comments below! If you’re craving more stories like this, Bored Panda has you covered with a link to an article here. Now let’s get into it!

When you become a parent, one of the first things you have to be okay with sacrificing is quality sleep, but sometimes that is not possible 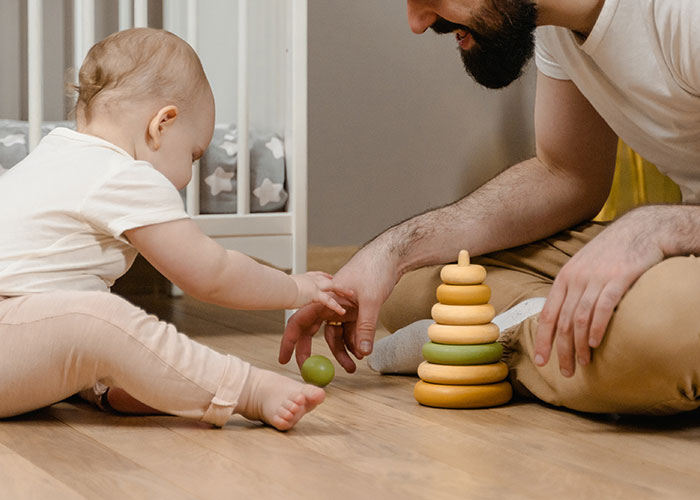 One man decided to ask the online community whether he was in the wrong for refusing to wake up to take care of his baby, as his wife was starting to struggle 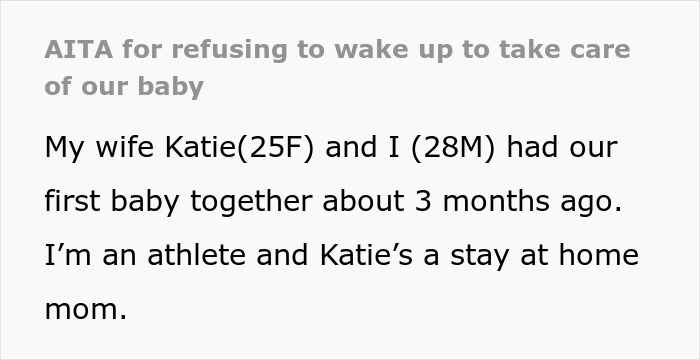 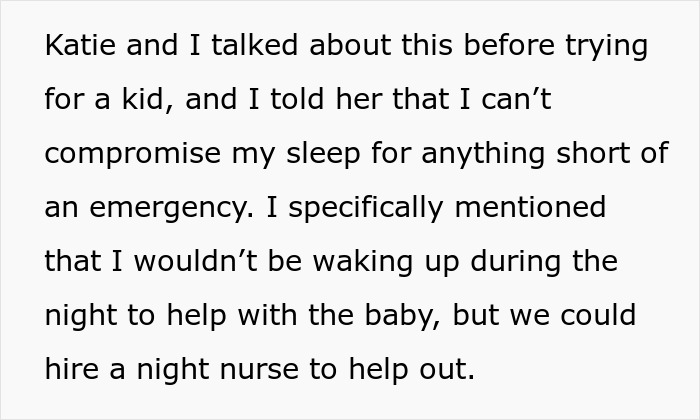 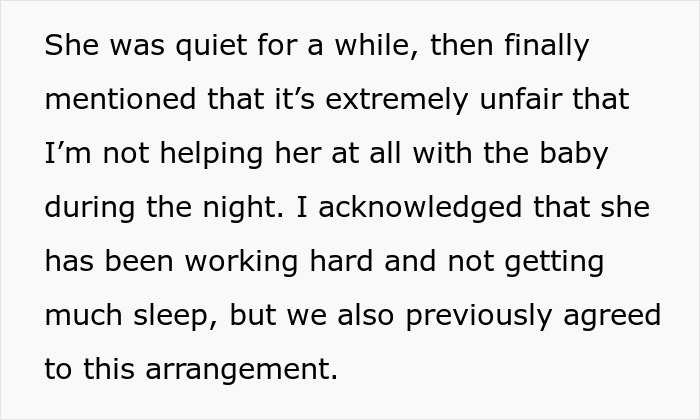 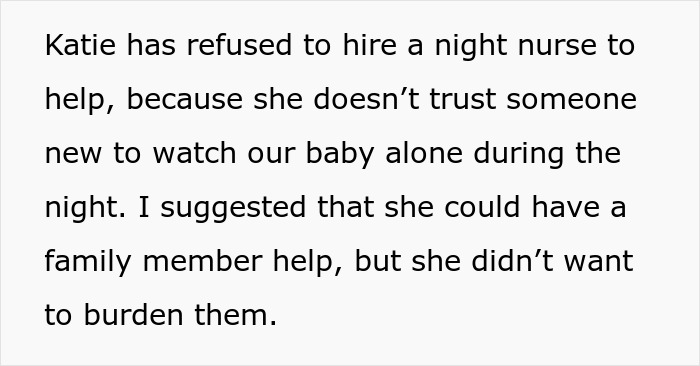 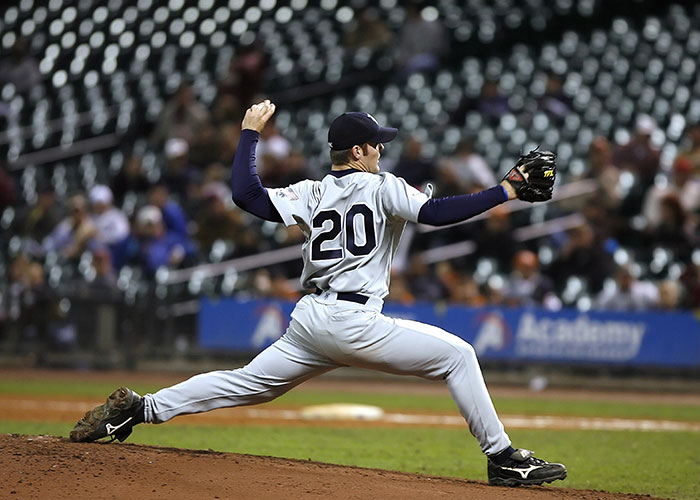 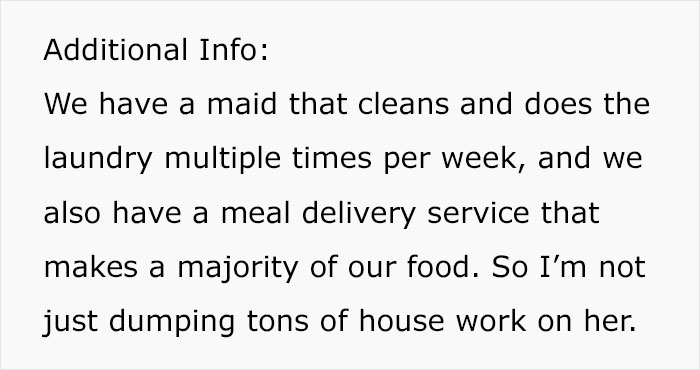 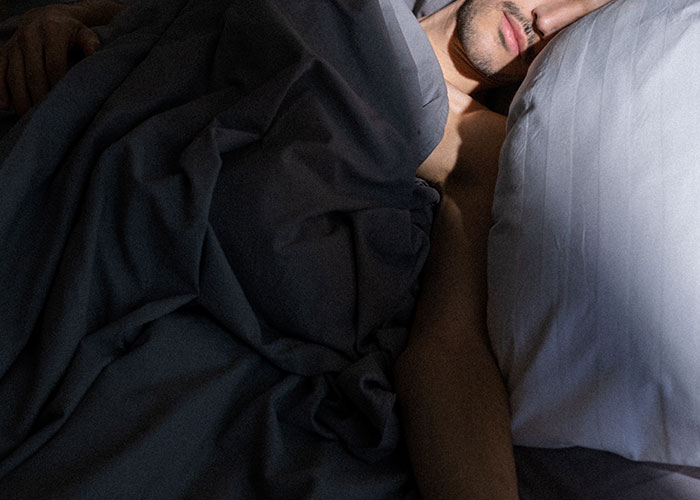 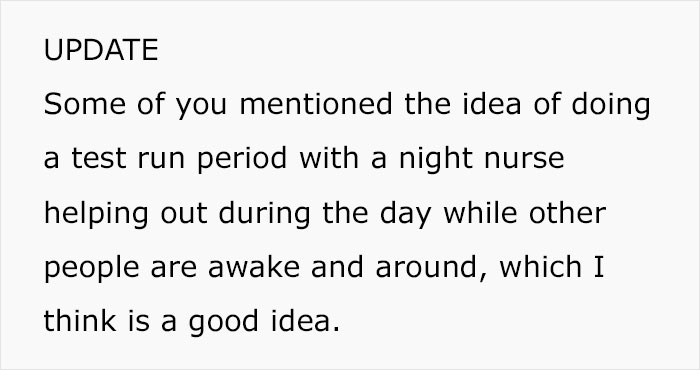 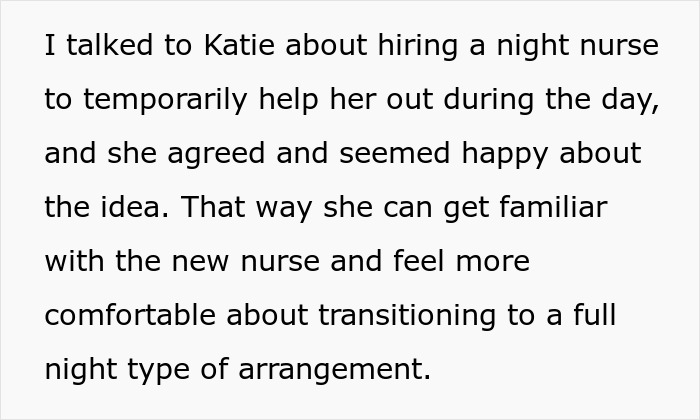 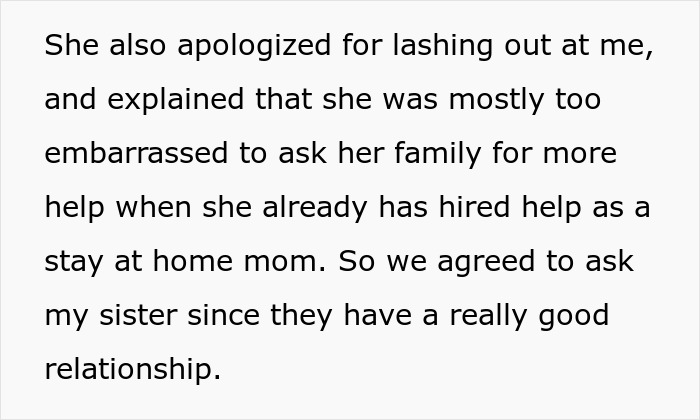 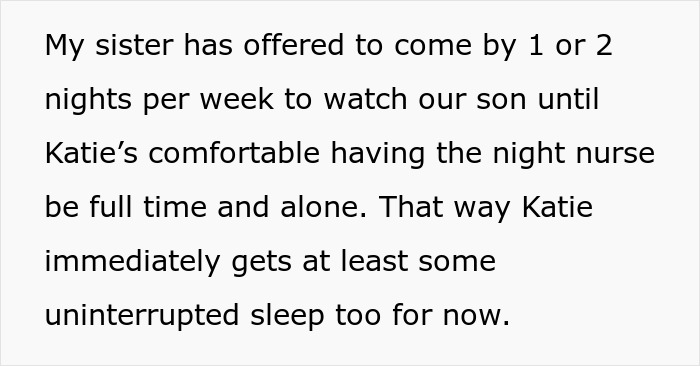 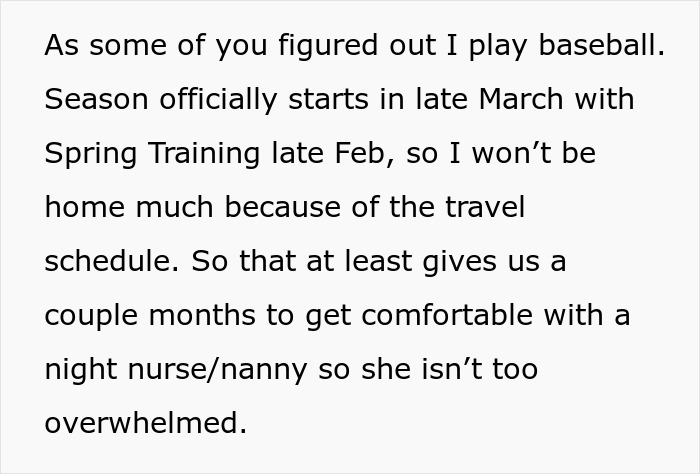 Sleep is one of the most pleasurable things about living, as ironic as it may sound. We daydream of our beds nearly as soon as we’re made to leave them. The soft pillows and heavy duvets are a contrast to cold floors and hard desks. However, sometimes we must sacrifice our wonderful downtime for our responsibilities.

One of those is a little bundle of joy, just grasping at the strings of understanding what living is all about. Having not so long ago been in the mom’s belly, where nutrients, sleep, and warmth were a given, this new world may be a bit of a hassle to get used to. And thus, sleep suffers for those that are used to it.

However, one new dad had agreed with his wife prior to them having kids that he would not be able to make this kind of commitment, seeing as his performance as an athlete would suffer immensely from the lack of sleep. What seemed reasonable at first led to a little bit of a disagreement after the baby was born.

The dad wondered—was he in the wrong for refusing to wake up and help out his wife with taking care of the baby in the nighttime? He decided to ask the r/AmIthe[Jerk] community for their advice, and they delivered.

Considering the circumstances, the internet deemed the dad not to be the jerk in the situation. Let us know your opinion in the comments below! 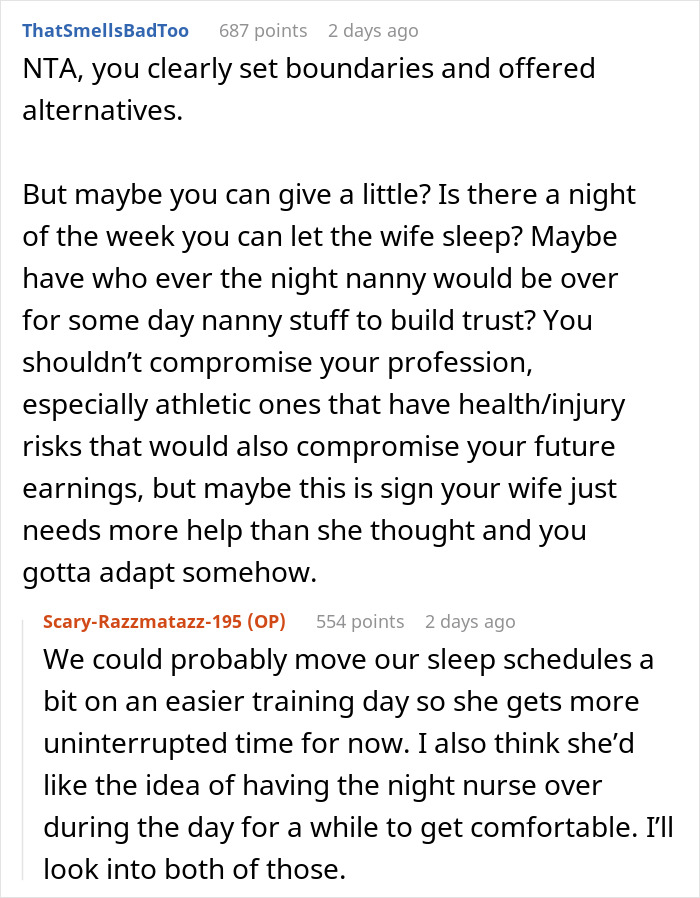 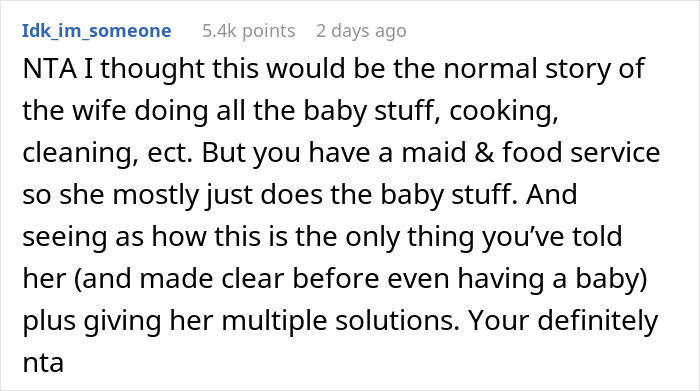 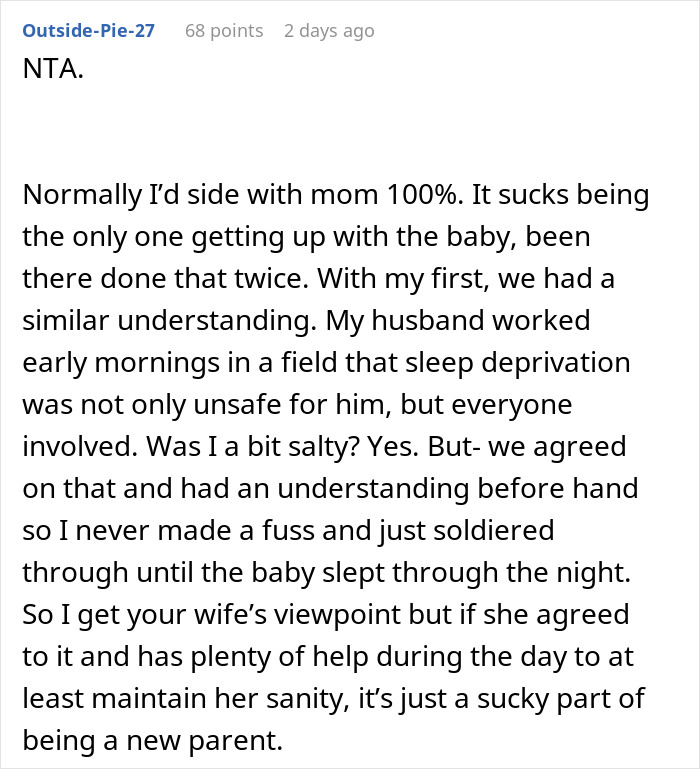 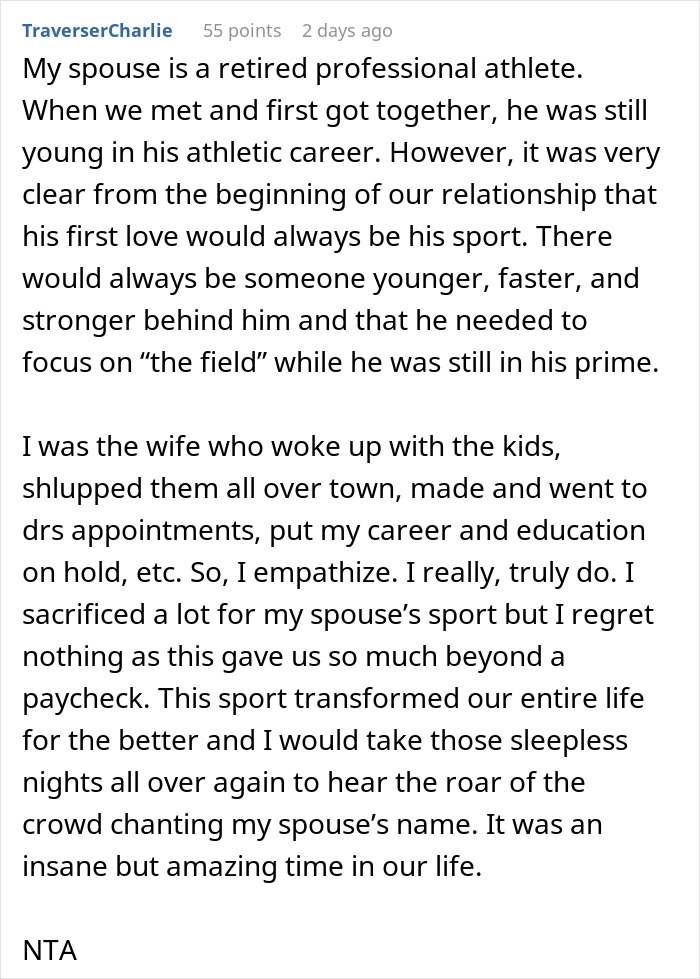 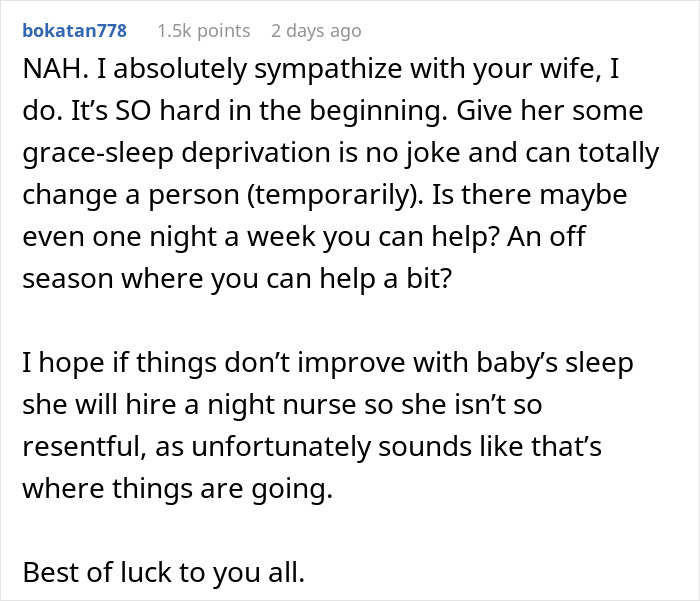 Sleep deprivation is when you don’t get the sleep you need. According to Eric Suni of the Sleep Foundation, a lack of sleep directly affects how we think and feel. While the short-term impacts are more noticeable, chronic sleep deprivation can heighten the long-term risk of physical and mental health problems.

Interestingly enough, even if a person sleeps the recommended eight hours, it won’t mean that they wake up well-rested. Many awakenings that fragment one’s sleep may lead to sleep insufficiency, and when it comes to having a child, that is well on course to happen.

Feeling extremely tired during the day, slowed thinking, poor or risky decision-making, and mood changes, including feelings of stress, anxiety, or irritability, are a few of the consequences that follow a lack of quality sleep. However, long-term sleep deprivation can lead to cardiovascular disease, diabetes, hormonal abnormalities, and bodily pains, to name a few.

But you can’t just tell your newborn baby that they need to calm down, shush, and let mommy and daddy get their eight hours of sleep, now can you? Doubt it’ll do one any good.

Nina from Sleeping Should Be Easy advises new parents to try out these sleep deprivation coping strategies, beginning with keeping life as simple as it can be. Now is not the time to run a zillion errands or resume your exercise regimen. If you’re already running low on sleep, conserve your energy for when it matters and accept that life will become chaotic and a wee bit dirtier.

Next, create an inviting sleep environment. Make your room pitch black, add white noise to muffle newborn baby sounds, and even make your bed. Try to ease up on the caffeine in later parts of the day, as it may prevent you from falling asleep when you’re so desperately trying to.

Lastly, take care of your basic needs as a human. Yes, you want to give your all in taking care of a newborn, as well as the home; however, you yourself need attention. So make sure you’re napping when the baby is, having food and water regularly, and going out for a walk to get some exercise and fresh air.

Most importantly, ask for help when you need it. Many of us have friends and family ready to watch the baby and, if budget allows, consider hiring help as well. Night nurses can help during the challenging hours of the night, especially when it comes to cases like the one we’re discussing today, where both parents simply can’t contribute the same amount of time during the night.

It seems that the couple has come to a consensus, finding a couple of solutions that work for both of them. Communication does solve everything, doesn’t it? Now, for those thinking that the man should have sucked it up and offered to help out a couple of nights per week, there are studies to back up his argument for sleep.

The available evidence suggests that sleep optimization can have a significant influence on athletic performance. Improvements in sleep duration and quality appear to improve reaction time, accuracy, and endurance performance. In addition, poor sleep may increase the risk of injury and illness, reducing training availability and undermining overall health.

Considering what we spoke about previously about disturbed sleep and its immediate effects on the body and mind, it’s not difficult to understand the man’s position, especially when his career allowed the family to hire the help they needed around the house. Hopefully, they continue being the support system each other requires on this roller coaster we call life.

But let us know your thoughts and opinions in the comments—was the dad in the wrong after all? What would you have done differently? Before that, make sure to read through the thoughts of fellow netizens who’ve made their verdict—the man is not the jerk after all. Hope you have a great rest of your day, and I’ll see you in the next one!

The post Man Asks Whether He’s The Jerk For Refusing To Wake Up In The Middle Of The Night To Take Care Of His Baby, The Internet Sides With Him first appeared on Bored Panda.