Spooky season is upon us! The best season, in my own humble opinion: the golden leaves falling gracefully, the temperature not too hot and not too cold, and the smell of pumpkin spice lattes in the air. Also known as soup season, cozy clothes season, and the season for conjuring up potions and casting spells.

One witch seems to have turned herself into an owl and stolen a child’s stick horse to use as a broom to soar through the neighborhood, instilling feelings of wonderment or dread. No, but seriously, a friendly owl was captured with a… you know what, just keep reading the story and watch the video at the end. You won’t believe me otherwise.

Leave your thoughts in the comments and tell us—if you were a witch capable of only casting one spell throughout your life, what would it be? Aight, let’s get into it!

A great horned owl in Eureka, Illinois, was captured flying through the sky carrying a stick horse toy, similar to how a witch would ride a broomstick 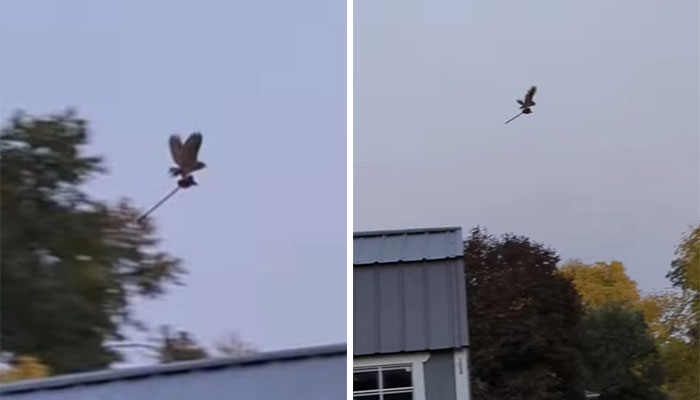 You look up at the sky, and what do you see? A cloud, a bird, a plane? Don’t look directly into the sun; do you want to go blind? But then, out of the corner of your eye, you spot a figure gliding across the sky. You think that your eyes are playing tricks on you, but in reality, it’s a treat of a lifetime.

Eric Lind was spending some quality time at his parents’ house in Eureka, Illinois, when life presented such a treat before him. He captured the magical great horned owl on camera as it flew through the sky carrying a child’s stick horse toy, similar to how the classic witch rides her broom.

Eric Lind shared the magical sight on Facebook after one neighbor called them up, urging them to look outside and witness the Halloween spirit in motion 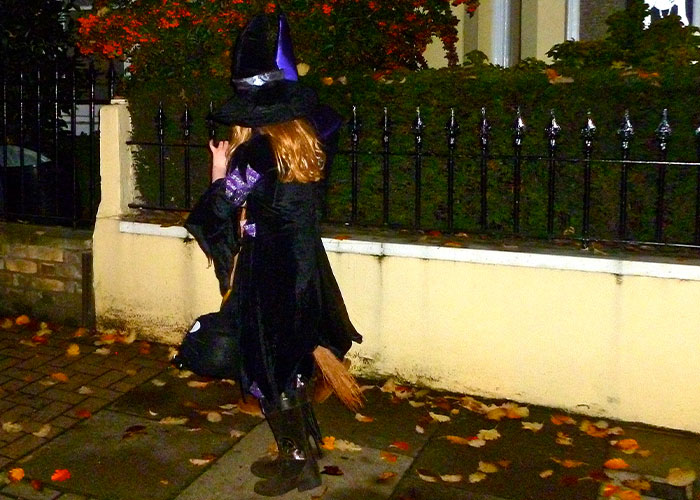 “My mom received a call from one of the neighbors telling her to look outside in the backyard at our pine tree,” he told Newsweek. “They had spotted the owl as it flew into the tree initially, but couldn’t quite tell what it was carrying at first.”

It was one of those stick horse toys, the ones that allow kids to imagine themselves transported back to the times of the Wild Wild West, riding through desolate towns in search of gold and adventure. They’re also quite handy in getting the random items that roll underneath the couch or for picking up items stacked atop the wardrobe.

“If your child is missing their stick horse, you’ll have to talk to the owl!!” Eric wrote in the post, which quickly went viral 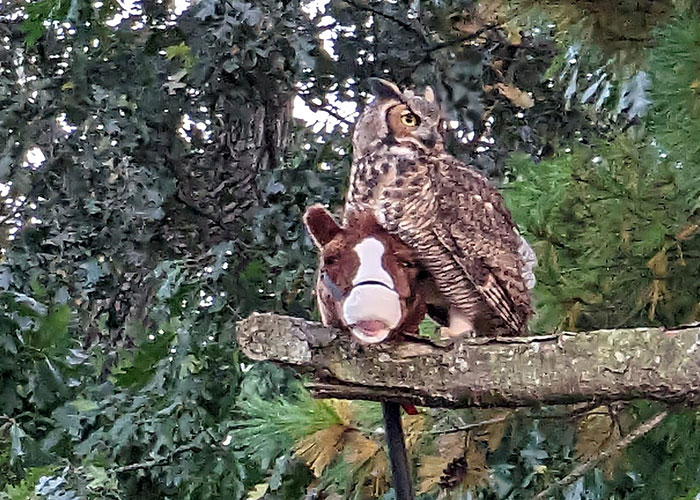 “If your child is missing their stick horse,” Eric wrote in a now-viral Facebook post, “you’ll have to talk to the owl!!” Some people expressed their concern for the owl’s safety, thinking it was somehow entangled or stuck to the toy horse, but Eric proceeded to calm down all of the wildlife enthusiasts.

“For those of you questioning if the owl is hurt or ‘entangled’ in the stick horse… we have no reason to believe this is the case as we witnessed the owl moving the horse around and even changing its grip on it at one point,” Eric explained in the updated post.

“This owl is part of a family of owls that have been in the neighborhood for about 6 months now, and this is one of the young owls… if someone thought that the owl was in danger or believed it was hurt, I’m sure the proper authorities would be contacted…”

Eric addressed some concerns for the owl’s safety, reassuring everyone that the proper authorities would have been contacted if the owl was in any danger 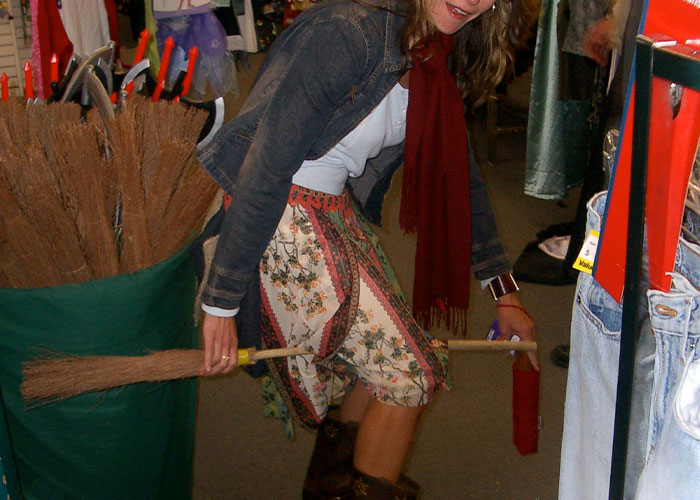 The post has received thousands of likes and hundreds of comments and has been reposted on various corners of social media, so reporting these numbers accurately needs its own spellwork. One Facebook user joked: “Owl Jr. doesn’t quite understand quidditch,” while another wrote: “All it needs is the Wicked Witch of the West music.”

“We were shocked and very surprised,” said Eric: “I posted it because it brought a good laugh and smile to my family—so I thought others would enjoy it too. It has been great to read the comments by others who said it made them laugh or made their day.” 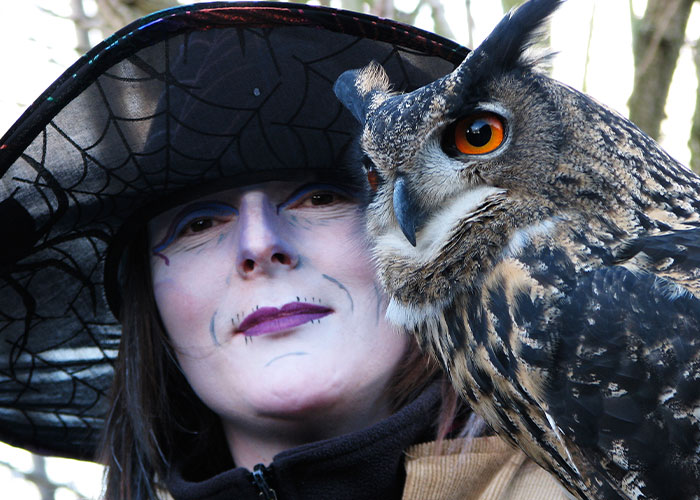 One thing is for certain—this little owl had the best timing. Halloween is just around the corner and you’re doing witchy spooky things? 10 points to Gryffindor. People have theorized that instead of being a sorcerer, the owl was just practicing its hunting skills, acting with the children’s toy as if it was prey. The fluffy head and the convenient size could have been mistaken for a big rabbit.

But where does the myth of witches riding brooms come from anyways? Wouldn’t it be more convenient to Uber than to deal with weather shenanigans and random obstacles? I mean, who put that tree there, honestly?!

Starting in the mid-1300s and continuing until the 1800s, the fight against ‘black magic’ and witchcraft led to the execution of hundreds upon thousands of people, the majority of them women. The fear of witchcraft became so strong that a mere accusation, even from a child, could lead to arrest.

“We witnessed the owl moving the horse around and even changing its grip on it at one point,” he wrote 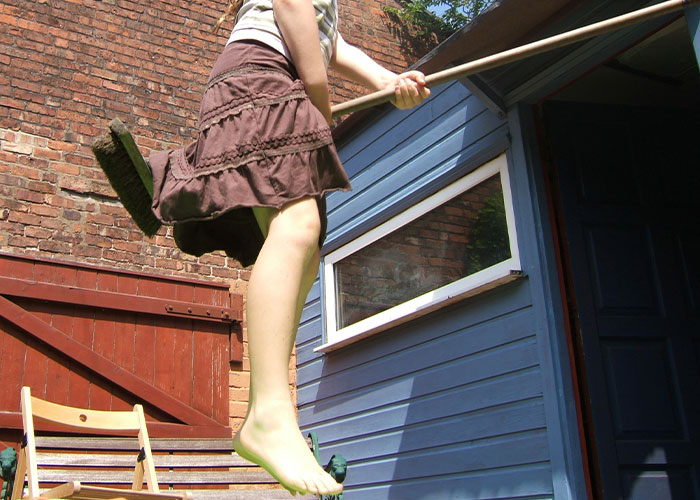 It was during this period that witches were first accused of flying around on brooms. This powerful symbol of female domesticity made prosecutors believe that the humble sweeping apparatus was used as a clever transportation method for witches, allowing them to join in Sabbats—midnight gatherings—hosted by demons, beasts, and other otherworldly horrors.

Anthropologist Robin Skelton suggests that a common pagan “broomstick dance,” a fertility ritual for crops and good harvests, may have been confused with the witches’ meetings. Another common theory is that it was the cause of common hallucinogens at the time. 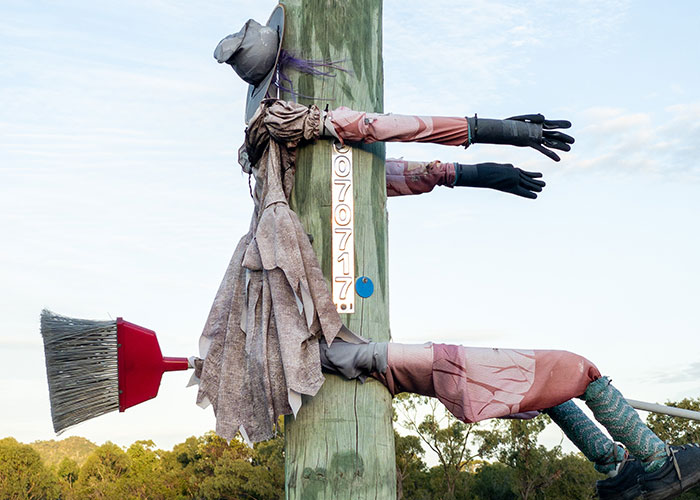 Pharmacologist David Kroll explained that witches in the Middle Ages were thought to concoct their brews from such plants as Atropa belladonna (deadly nightshade), Hyoscyamus niger (henbane), Mandragora officinarum (mandrake) and Datura stramonium (jimsonweed), all of which would have produced hallucinogenic chemicals known as tropane alkaloids.

According to some historical accounts, rather than ingesting these mind-altering substances by eating or drinking, which would have caused intestinal distress, people chose to absorb them through the skin—often in the most intimate areas of their bodies. It was argued that a convenient way to apply these ointments was to dip the broomstick in the potion and then straddle or ‘ride’ the broom.

“But the vulgar believe, and the witches confess, that on certain days or nights they anoint a staff and ride on it to the appointed place or anoint themselves under the arms and in other hairy places,” explained the 15th-century theologian Jordanes de Bergamo. Interesting stuff!

There are a handful of theories as to where the myth of witches riding brooms came from, but we’re hopeful we’ll see more of these types of witches around! 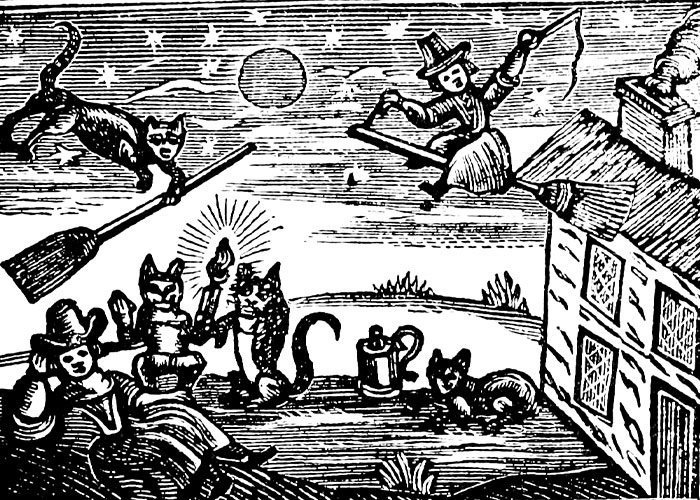 Whichever the case, this little creature has made hundreds of lives better (apart from the child who’s still missing its horse), and we are grateful to Eric for capturing the magical moment. We wish him all the best and hope that he treats us all to more spooky content!

Let us know your thoughts in the comments below, and don’t forget to share your answers to the question: If you were a witch capable of only casting one spell throughout your life, what would it be? Alright, that’s it from me, bye now!

People have absolutely loved this treat of Halloween joy. Let us know your thoughts in the comments! 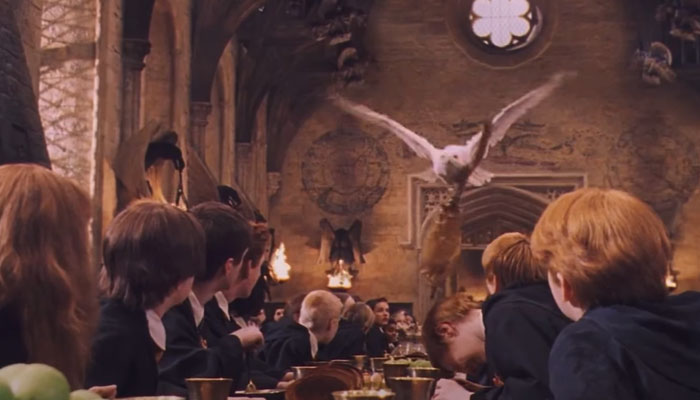 The post Man Captures Owl Flying Away With Child’s Hobby Horse Like A Witch Riding A Broom, Leaves The Internet In Stitches first appeared on Bored Panda.