I found the cutest little frog in the bottom of my romaine lettuce tonight- it’s too cold to set him outside (27 degrees), but he’s been living in the lettuce in the fridge for several days now- does anyone know what I should do so that he doesn’t die? pic.twitter.com/usaCIEWaLv

Simon Curtis bought a box of lettuce. It was in his refrigerator for several days before he got to the bottom of it and found a tiny green tree frog in the container! Now, a lot of people would get squicked out and complain to the store, but this frog was alive. And adorable. Curtis didn’t want to set the frog outside, because the temperature was below freezing, so he turned to Twitter for advice.

He kept the frog in the original container, but added moisture and a water dish, and kept him in the kitchen. He named the frog Tony, and found out Tony is somewhat of an escape artist. Curtis kept his Twitter followers updated on all of Tony’s shenanigans, and every day fell more in love with the frog.  Tired of constantly looking for Tony, Curtis got a terrarium to give him a bigger, more secure home. After consulting wildlife experts, Curtis decided that he now has a pet frog. 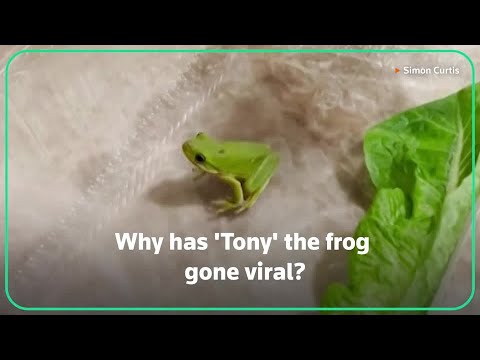 You can read the entire saga as it unfolded on Twitter just before Christmas, at Bored Panda.

The Art That Inspired Joan Didion Goes to Auction

A Museum Sees its Collection Through a Queer Lens

The Artist Who Painted the Struggles We Face

When TV News Anchors Have a Baby

Filled with Light, An A-Frame House Designed by Naturvillan Functions Entirely Off the Grid

At Durat You’ll Find 1,000 Vibrant Colors of Surface Materials to Re-Imagine Your Space