It’s no secret that weddings are synonymous with stress as the pressure and expectations the happy couple feels to live up to are often off the charts. And among the many important decisions brides go through when planning one of the happiest days in their lives, the dress usually falls right at the top of the list.

Finding the perfect gown that matches your personality and makes you feel and look beautiful is no easy task. But when you finally spot one and then discover your fiancé had the audacity to return it without your permission, well, you can only imagine this woman’s fury.

“I hate to admit that wedding planning has been an absolute nightmare,” recently wrote a 28-year-old bride-to-be in the popular AITA subreddit. The woman reached out to the community to ask if she was wrong to blow up at her fiancé for refusing to find common ground (read: yield to ridiculous requests) with his mom. Turns out, the lady had a specific “vision” for the big day, and she wouldn’t settle for anything less.

Below, you can read the full story featuring the intrusive mother-in-law as well as the verdict readers were quick to deem. Then decide for yourself if the situation was handled appropriately, and be sure to weigh in on the discussion in the comments! 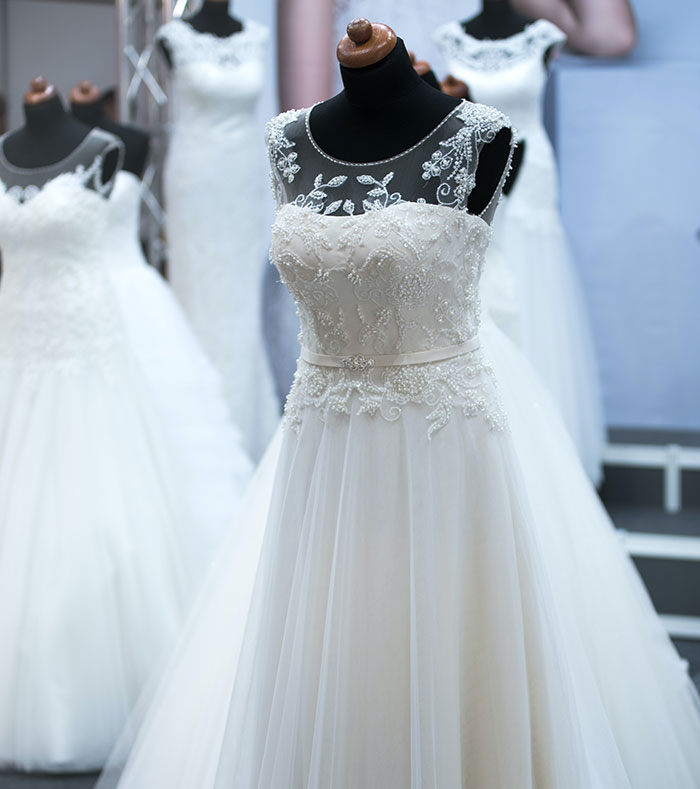 Unsure of how to handle the situation, the woman asked the internet for perspective 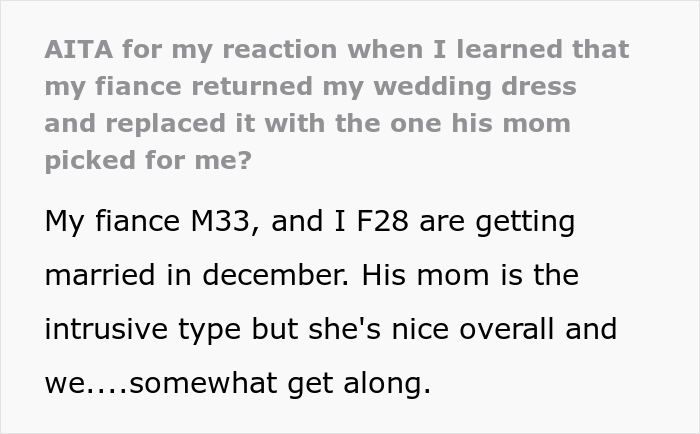 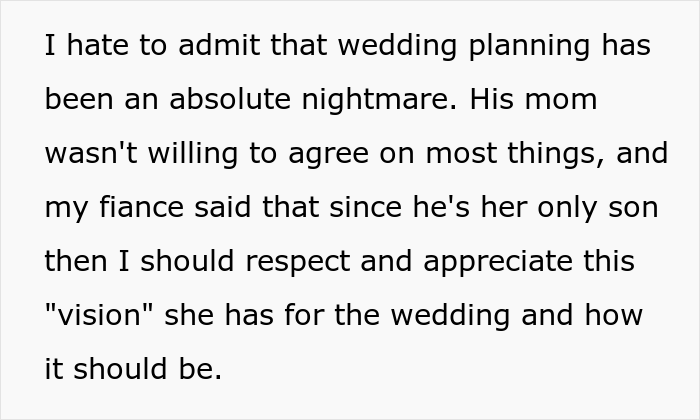 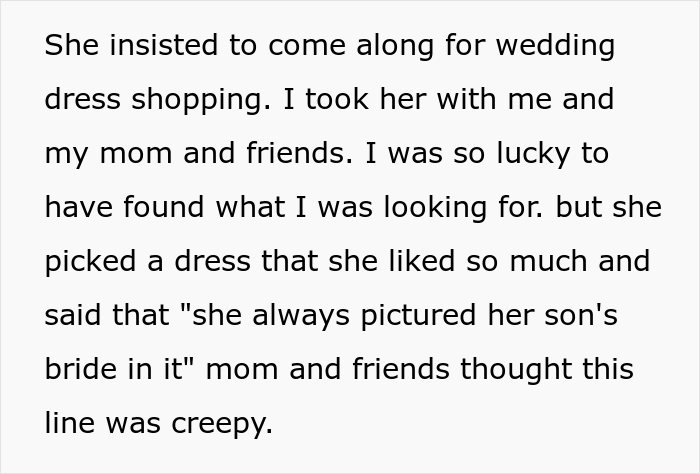 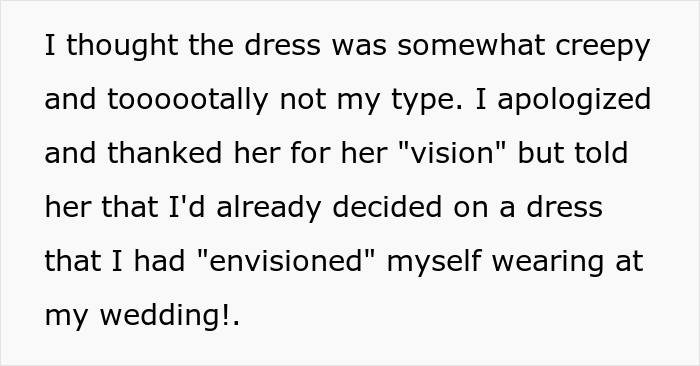 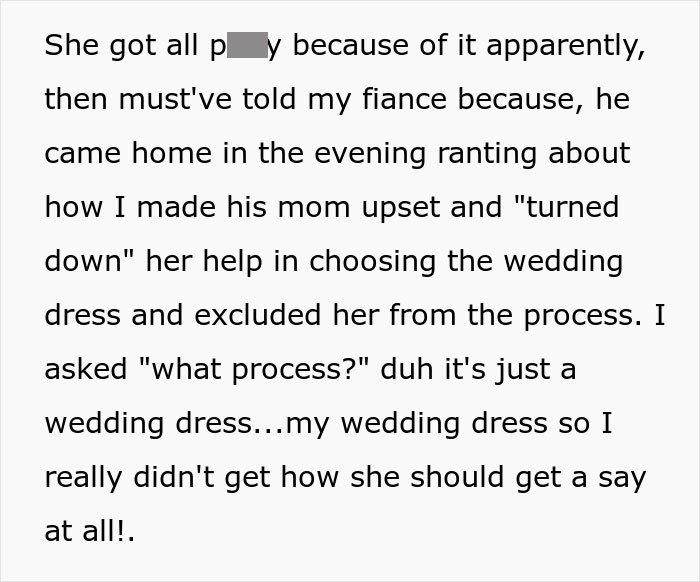 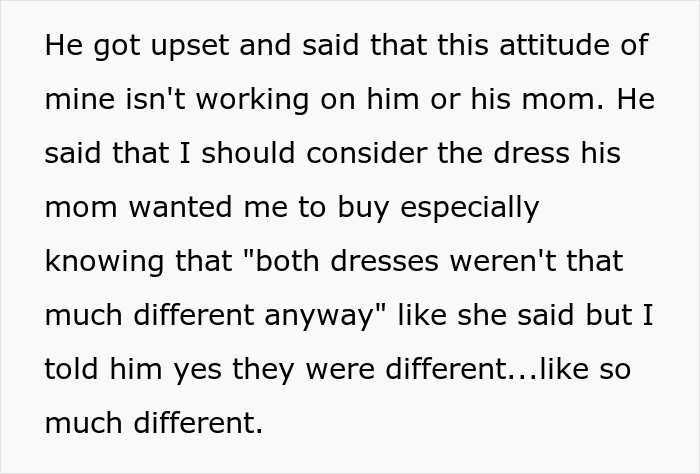 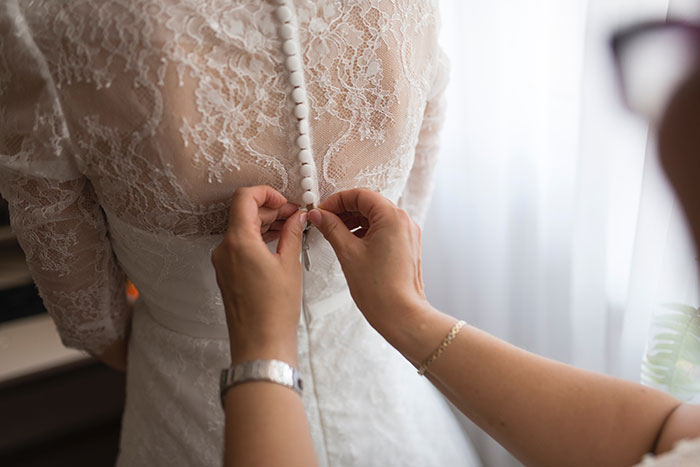 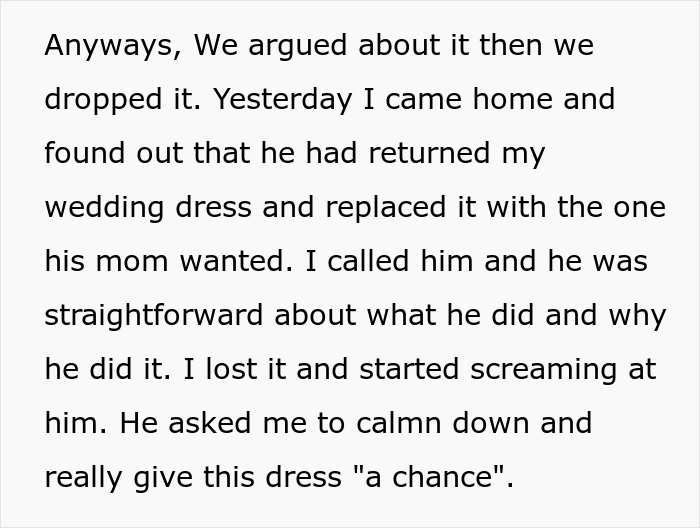 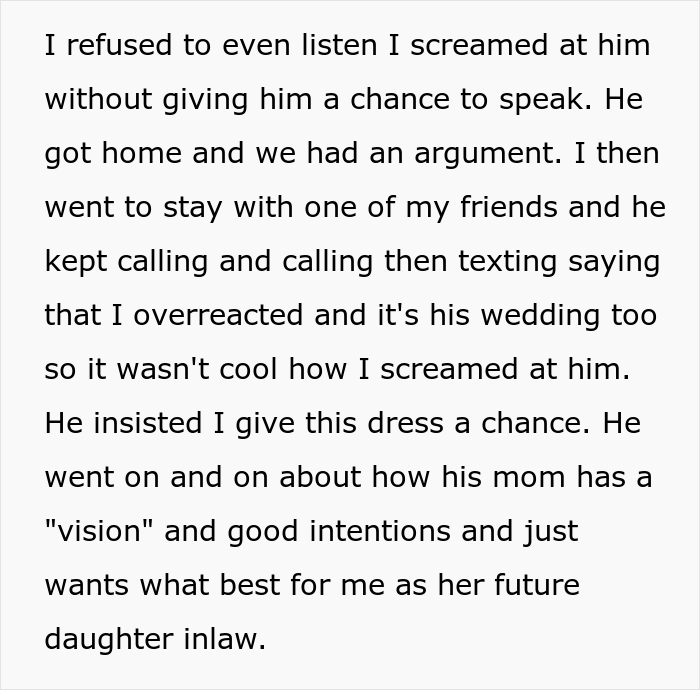 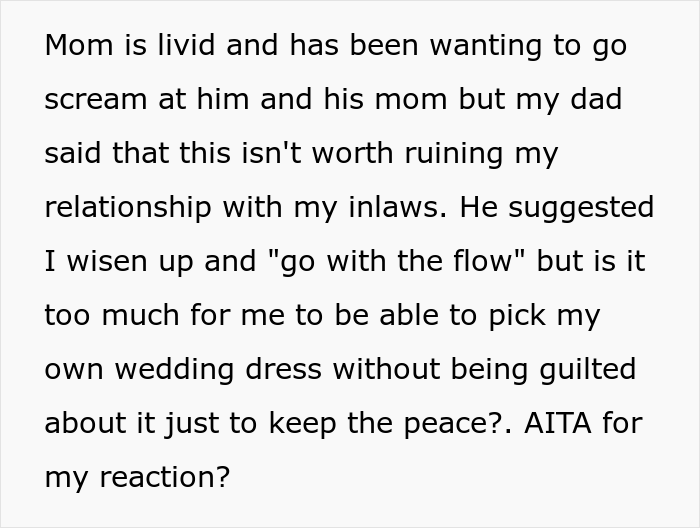 Later on, she added an update to clarify some details about the incident 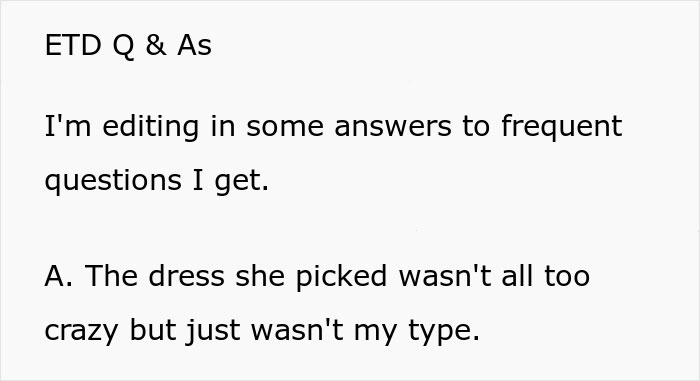 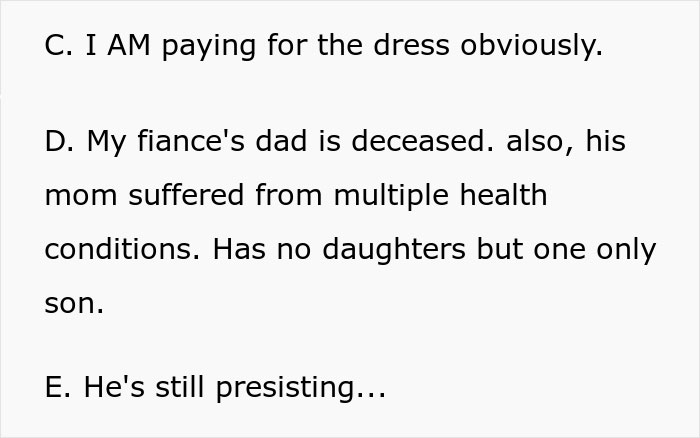 After reading the woman’s story, the community members were more than ready to express overwhelming support for the bride-to-be and sound the alarm about her relationship dynamics. The vast majority deemed that the mother-in-law and her son are in the wrong in this situation, with some even saying it’s a good thing they showed their true colors right before tying the knot.

It’s easy to see why the whole incident deeply resonated with readers — everyone knows that getting along with in-laws and even tolerating them can be a difficult, if not impossible, task. As these strangers become a part of your family together with your other half, finding common ground can be hard.

Previously, we reached out to Dr. Nathalie Martinek, Ph. D., a narcissism hacker and relationship coach, to gain more insight on difficult in-law relationships. According to her, there may be many reasons why getting along with your partner’s parents can seem tricky. “Often, the partner is seen as an inadequate match for their son or daughter due to their personality, their profession, education level, upbringing or culture,” she told Bored Panda.

The expert also pointed out it can especially be challenging for women when their mother-in-law sees them as a competitor for their attention. “Mother-in-laws who are possessive over their son feel insecure about her son’s degree of loyalty and want to be the most important woman in her son’s life by continually having an influence over his feelings and choices.”

In these cases, the mother may seek to control her son’s decisions once he creates a relationship by “using emotional manipulation tactics to keep her son close and dependent on his mother’s approval because he still needs this to feel secure and stable.”

Dr. Martinek argued that sadly, men are often oblivious to their mother’s attempts to drive a wedge between the couple “by using methods to undermine the daughter-in-law/partner, like criticizing her character, appearance, housekeeping, parenting or profession to cause tension in the couple’s relationship so that the son runs back to his mother every time her tactics cause conflict.”

She noted that some mothers-in-law consistently try to ruin the relationship, whether consciously or not, until they can restore the parent-child dynamic they once had with their sons. The interesting part is that the mother may not even realize she’s behaving this way. Moreover, her son may have difficulties acknowledging these harmful patterns, even if his partner who notices them points them out.

“Relationships are hard enough between two people without the interference of parents or anyone else. While some parents want their children to believe that meddling or offers of advice mean they care, it can often mean that the parents haven’t been able to let go of their adult child and still want to be seen as the most important person in that adult child’s life,” Dr. Martinek concluded.

Bored Panda would love to hear your thoughts about this situation. Feel free to share your opinions about the fiancé’s actions and the way the bride-to-be handled the whole incident in the comments below!

Readers unanimously sided with the bride, with many suggesting that her fiancé’s behavior was a huge red flag 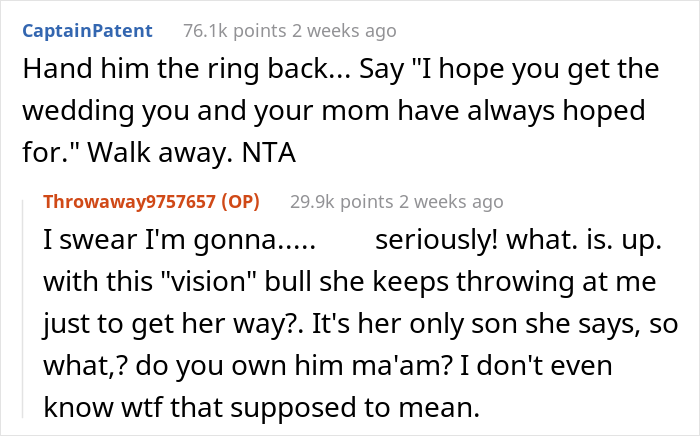 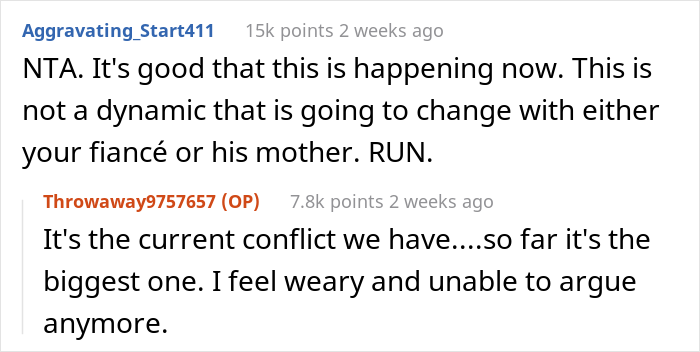 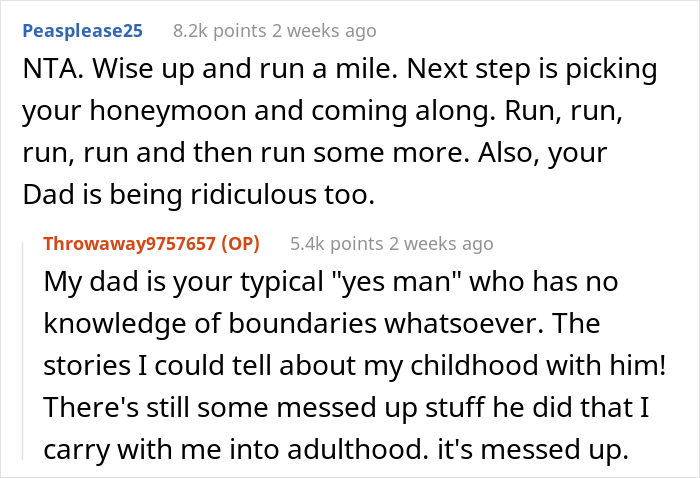 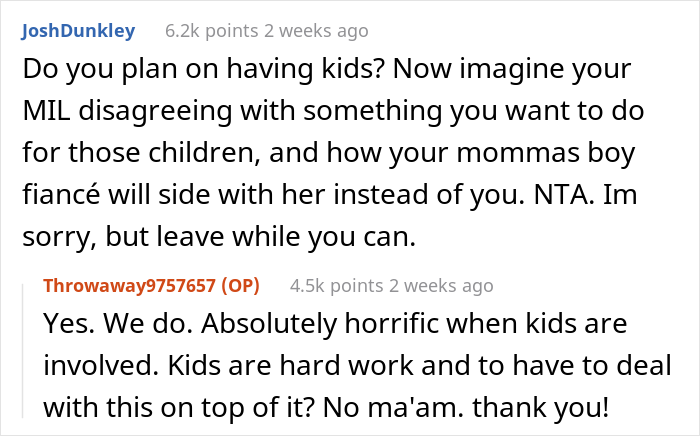 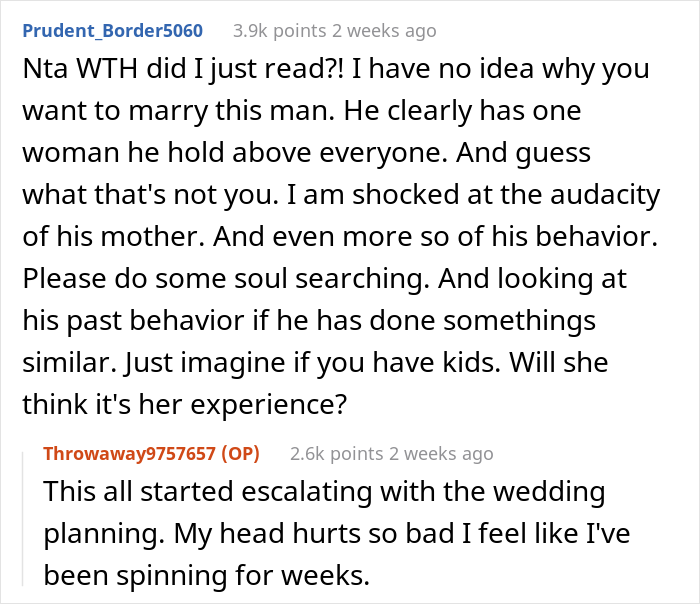 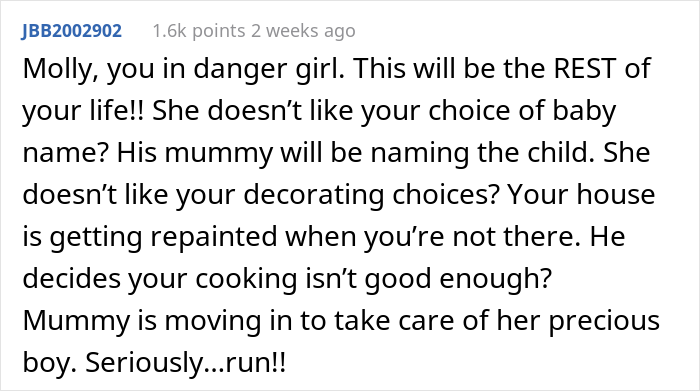 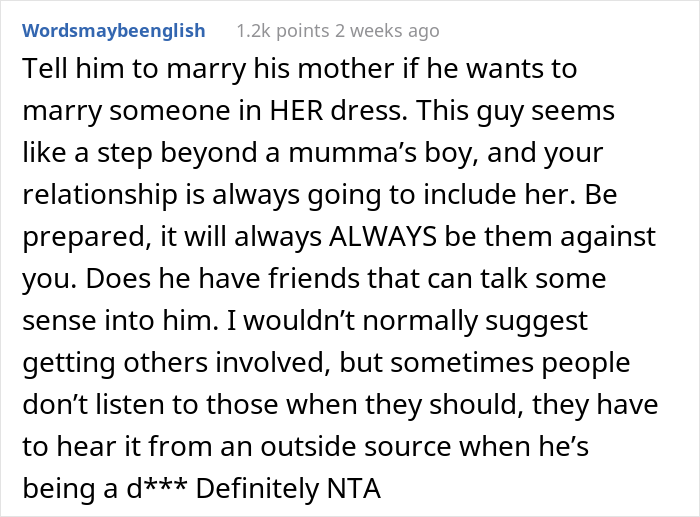 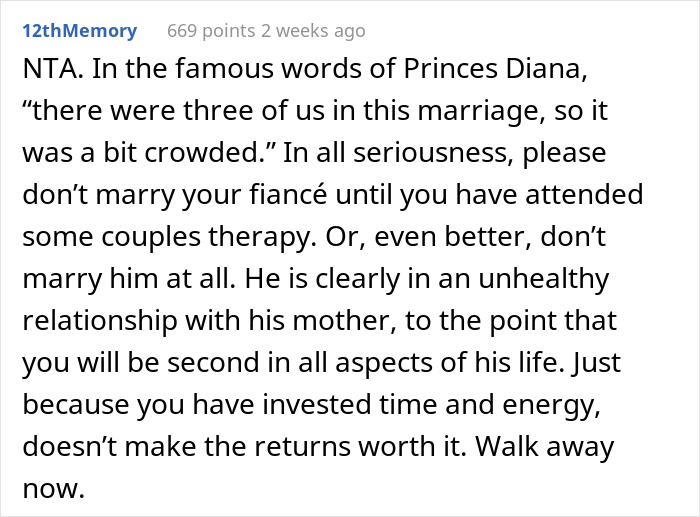 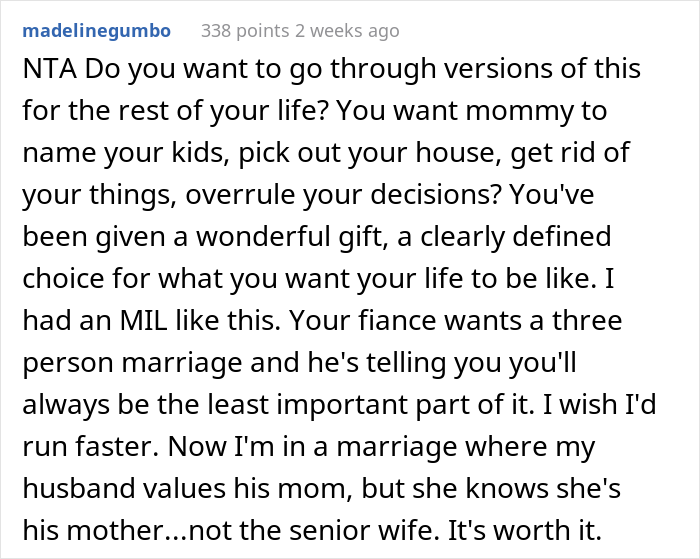 The post Man Returns His Fiancée’s Wedding Dress To Respect His Mom’s “Vision”, Gets Screamed At first appeared on Bored Panda.