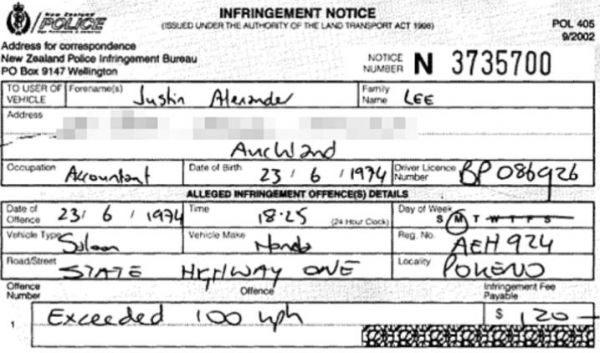 Letters of Note is a blog that features historically significant, unusual, or sometimes amusing letters exchanged between people. A few days ago, it shared the funny correspondence between Justin Lee of Auckland, New Zealand and the national police force.

Lee received a ticket for speeding. When was he driving 100 KPH on a public road? On June 23, 1974. That was also, coincidentally, the date of his birth.

Lee wrote a letter protesting this ticket. He does not remember the date of his birth, so he asked his mother if she remembered him driving too quickly, or even driving, on that date:

[…] I rang Mum to see if she remembered what I was doing that day. She said that – coincidentally – I was born that day!!

Mum mentioned that I was born at around five o’clock in the evening on that day in Porirua, which is not far from Wellington […]

For me to have traveled from Porirua to the foot of the Bombay Hills just out of Auckland by six thirty, I would had to have crawled into the first car in the hospital parking lot and headed for Auckland at around 1,000 km/h. For this reason, it is entirely possible that the constable who clocked me back in 1974 was holding his laser equipment upside down and instead of doing 116 km/h as per the infringement notice, it is more likely that I was doing 911 km/h.

Lee adds that his Nissan Bluebird, a robust and reliable car, was not unlike Doc Brown’s Delorean in Back to the Future, equipped with time travel accessories, making it even more unlikely that it was indeed his car that was recorded by police radar equipment.

You can read all of Lee’s letter and the police response at Letters of Note.